How Things Get Connected: Tomás Saraceno at the BMA 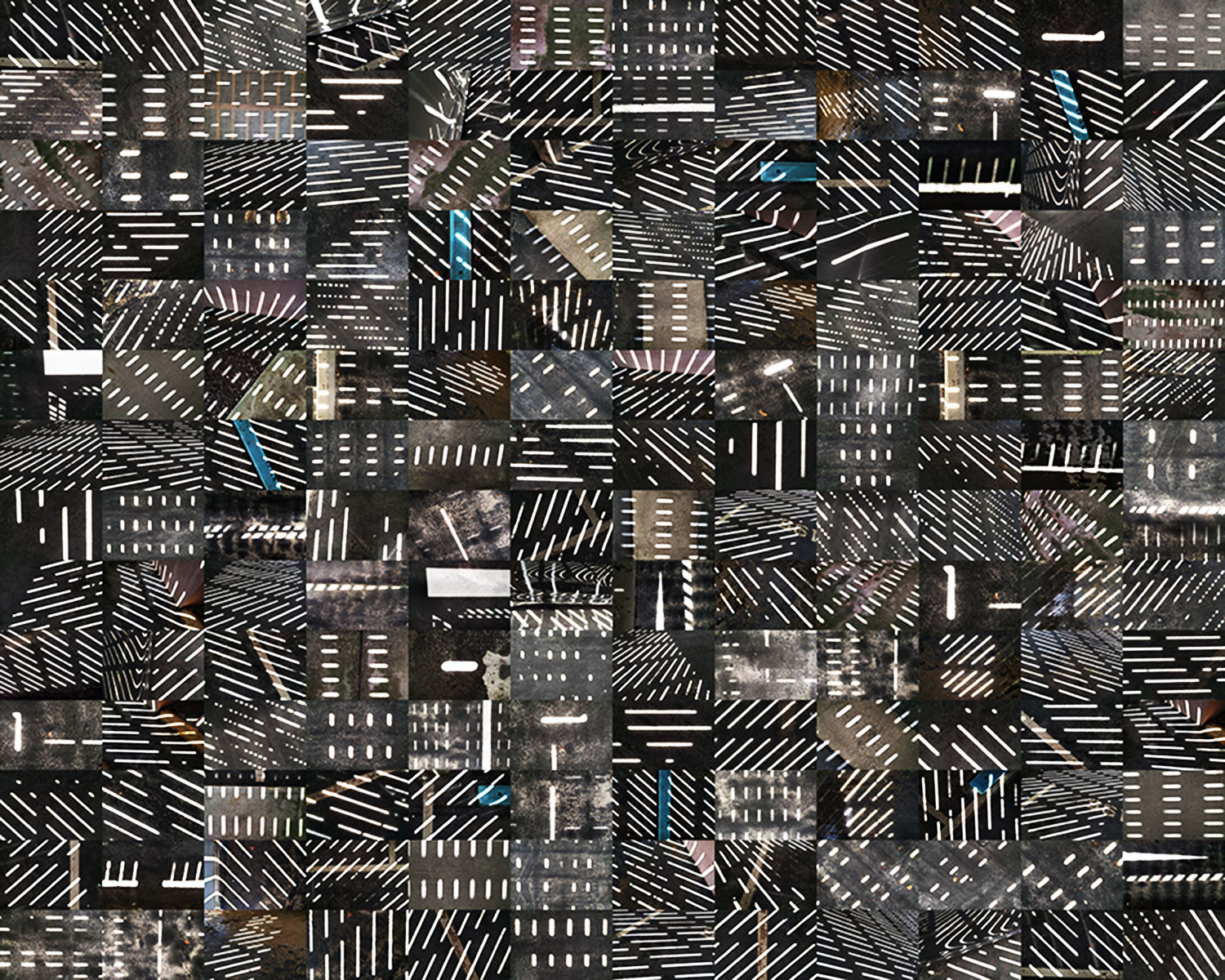 Visual Art
How Things Get Connected: Tomás Saraceno at the BMA 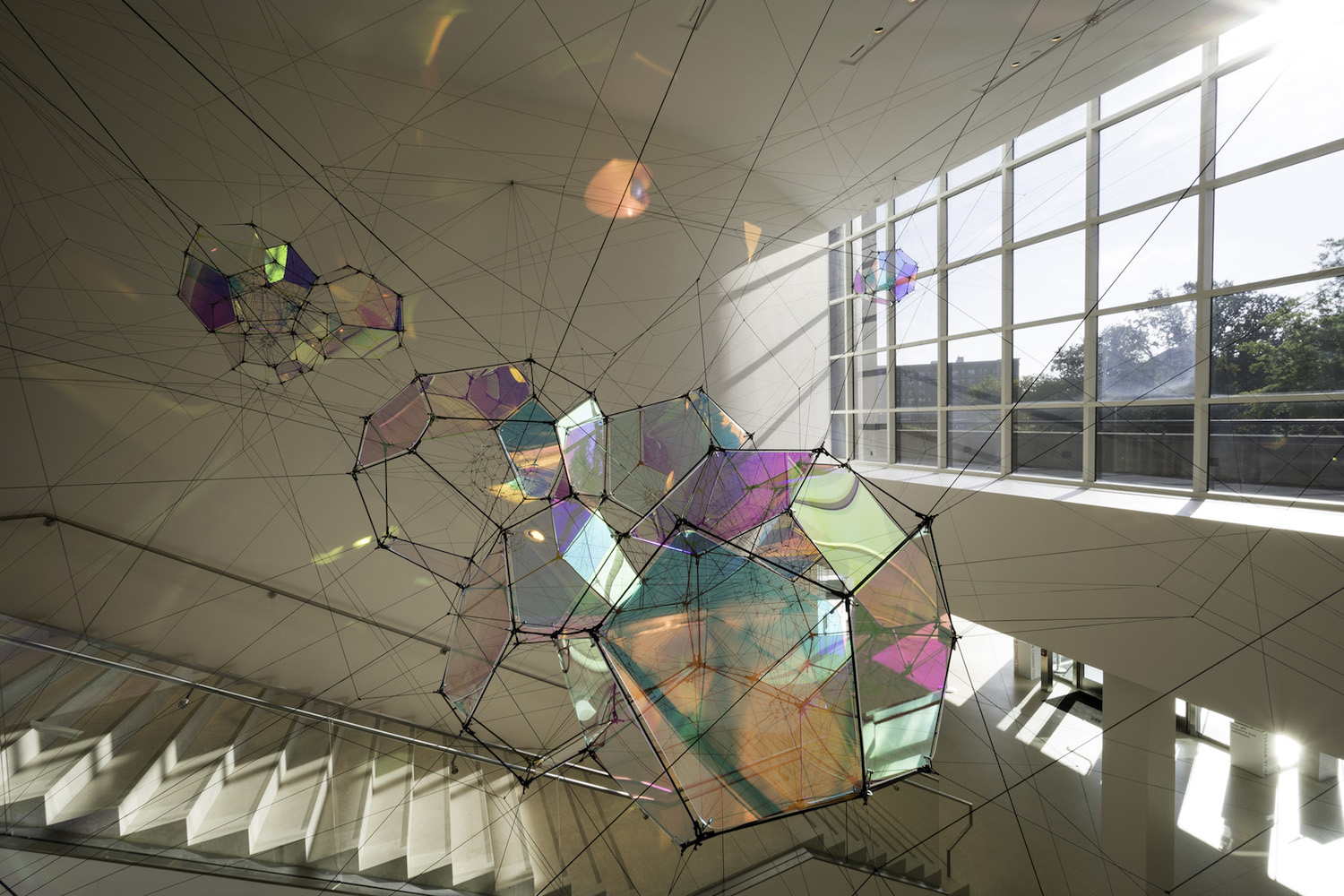 Tomás Saraceno steps towards the rail of the lobby balcony at the Baltimore Museum of Art, a gaggle of listeners trailing behind him and an impish smile on his face. “I want to show you something,” says the Argentina-born, Berlin-based artist, “that is not allowed.” And he leans over the rail, and plucks gently at one of the many tense cords that he and a team of assistants recently installed in the sun-spangled space. The polyester rope vibrates – and, as we watch, sets into motion a series of increasingly remote threads and crystalline forms that tremble variously, accommodating and dispersing the disturbance. One touch, and an entire field of relations is suddenly made visible. 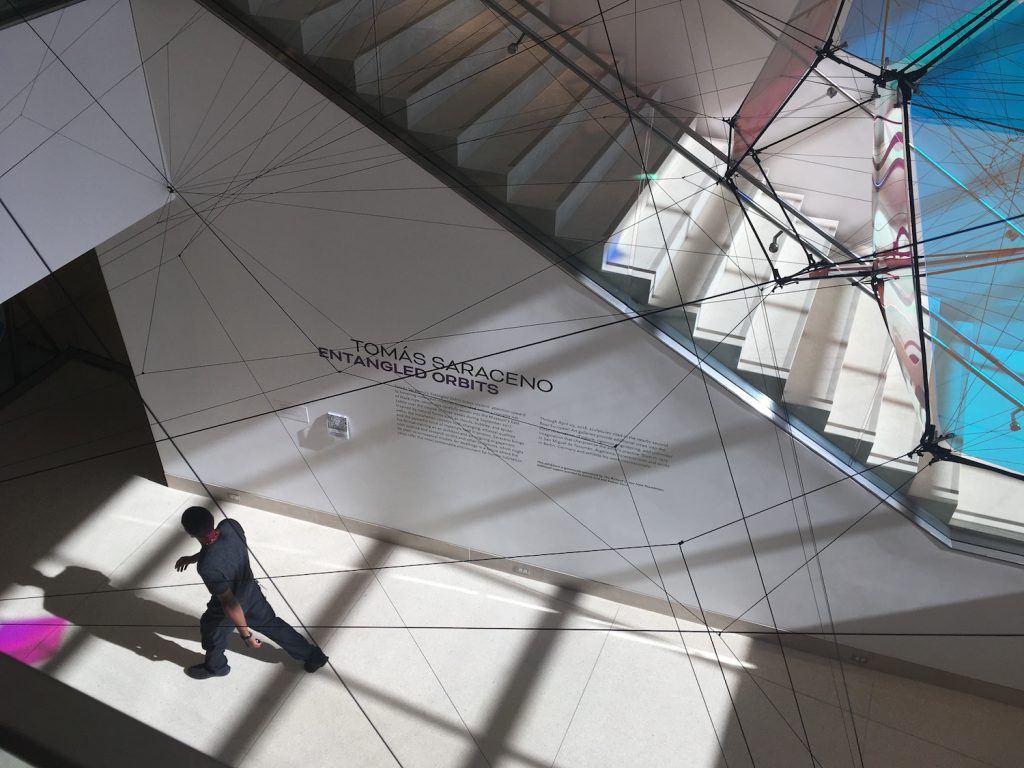 Relations are central to the work of Saraceno, who first gained broad notice in 2009 with a stunningly intricate web-like installation at the Venice Biennale. His show at the BMA, which runs through June and was curated by Senior Curator of Contemporary Art Kristen Hileman, features five pieces that are physically diverse but linked by a set of familiar underlying interests. A complex polyhedron formed of colorful, translucent forms and moored by a series of slender cords fills one gallery. Two elegant mobiles constructed of extended curved elements that recall atomic models or orbital paths, hang from the ceiling of a second room and idly rotate. And in a third gallery, a single bulb illuminates a glass vitrine in which spiders of two distinct species have spun adjacent webs, in a juxtaposition of dense and varied geometries.

The work is undeniably beautiful; built around crisp forms, bright colors, and affecting uses of light, it can be visually stunning. But it’s not merely pretty. Rather, it’s also informed by an active, searching interest in science and scientific forms. Saraceno considers himself a researcher: he has spent time at one of the Max Planck Institutes, and claims to own one of the most comprehensive three-dimensional spider web collections in the world. In conversation, he alludes to the work of neurologists and theoretical mathematicians, and his pieces can feel, in their combinations of tensile strength and airy lightness, like exercises in applied physics. Above all, though, his practice seems to be motivated by a basic aim. “I like to try to understand,” Saraceno explained at the press preview, “how things get connected.” 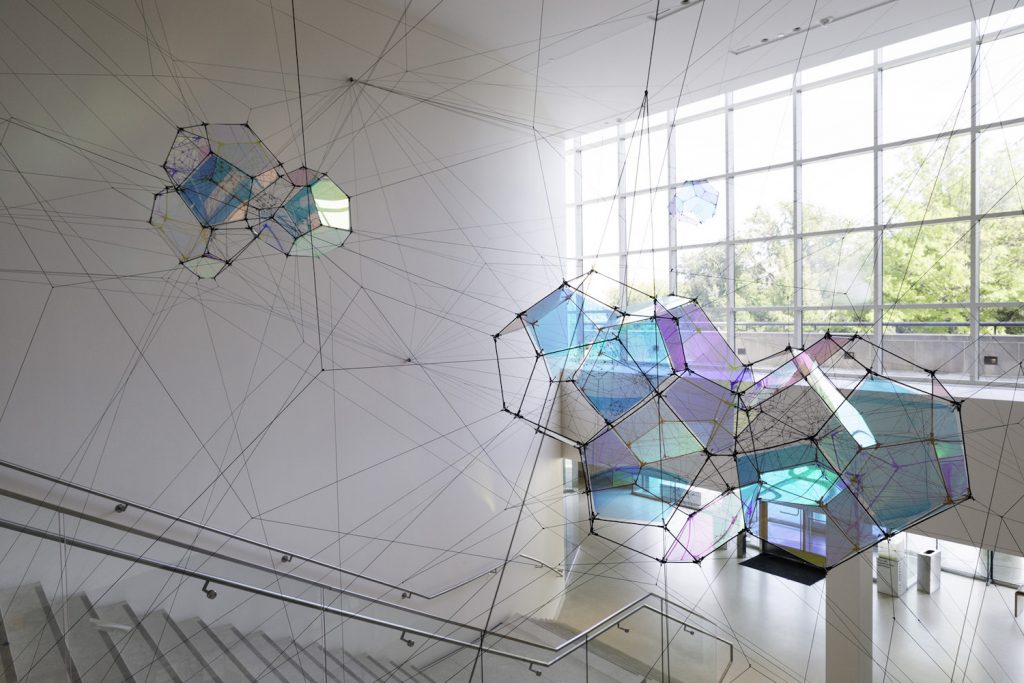 You can understand that claim in several senses. Most obviously, his work is structurally complex, employing basic elements in combination to yield sophisticated groupings or networks. In the lobby piece (entitled Entangled Orbits), for example, three clusters of polyhedrons composed of variously pentagonal and hexagonal Plexiglas facets hover in space, bound by dozens of cables that emanate from twelve anchors. The general effect is one of a delightfully buoyant insubstantiality (the forms shimmer in a spectrum of violets, pinks, and neon greens), even as we understand it to be the result of an elaborate process of calculated decisions. Indeed, it’s not hard to imagine Saraceno and his team of assistants repeatedly answering, during the installation of the work, a few rote structural questions: how to suspend this object, and how to link this to that?

In the process, Saraceno’s work suggests a second connection: a link, that is, between work of art and institution. These are pieces whose integrity depends upon the walls of the museum; their form, you might say, is literally bound to the gallery about them. In this sense, they loosely recall the Russian Constructivist Vladimir Tatlin’s radical corner reliefs, in which assemblages formed of thin metal plates were anchored to perpendicular walls. Admittedly, as Margit Rowell once noted, Tatlin’s forms were often organic, rooted in an interest in navigation and sails; Saraceno is more rigorously geometric by nature. Both artists, though, stress relationships (Tatlin once emphasized, in writing of Constructivism, “the organic connection of its effort, its work, to the materials”), and both implicitly acknowledge the physical framework in which they work. 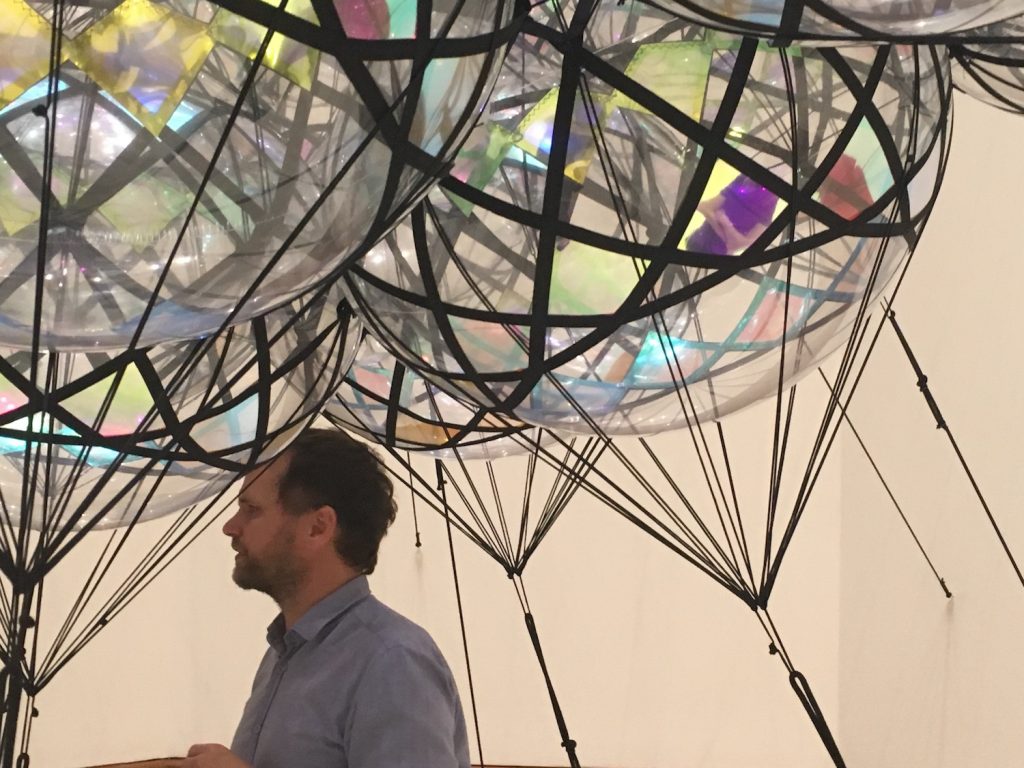 But can go further still, for several of Saraceno’s works also foreground the relationship between viewer and work of art. The confusingly titled 2011 piece 80SW iridescent/Flying Garden/Air-Port-City, for example, is moored to wall and ceiling by a series of black ropes; in moving through the room we have to carefully pick our way through the vectors. Similarly, the walls of the room that features the vitrine with webs are obscured in the pitch dark, creating a deeply disorienting effect: we creep cautiously in an unfamiliar space. As Hileman has observed, Saraceno thus effectively alters the way in which we perceive contemporary sculpture, dissolving a traditional distinction between visual and experiential. These works interrupt our space, resulting in a self-consciousness and a sense that any conventional aesthetic distance has been effaced.

And here I want to suggest a final connection, which is admittedly rather distant. In the early 1960s, the Argentinian artist Julio Le Parc (who had recently moved to Paris) produced a series of remarkable works in which small shards of Plexiglas were linked to create a sort of curtain, which was provocatively positioned in the center of the room – allowing viewers to walk around it and to consider the shifting, mutable reflection from a series of angles. Like Saraceno, Le Parc was formally committed to a program of research (he was a co-founder of the innovative Groupe de Recherche d’Art Visuel). More importantly still, Le Parc was (and still is, as he nears his 80th birthday) centrally interested in dramatic installations that produce entrancing optical effects and that call attention to the surrounding space and the position of the beholder. In this way, his work is often not unlike, in spirit and in effect, that of Saraceno. 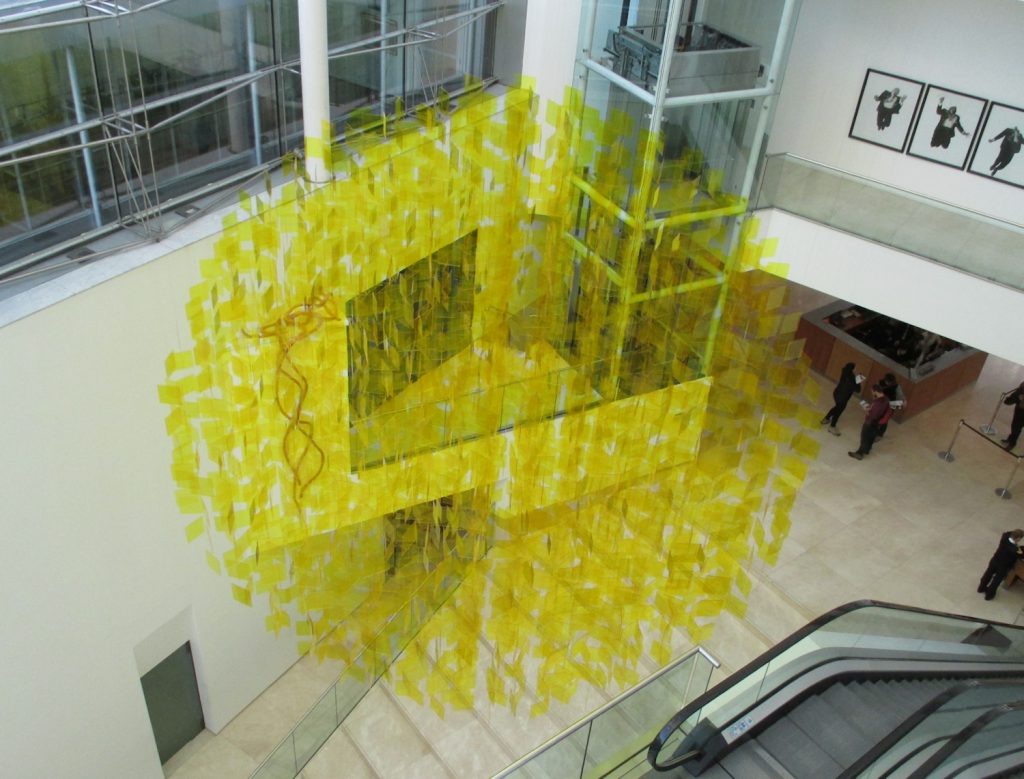 Let’s don’t push such analogies too far: Saraceno’s work does differ, in a number of ways, from Le Parc’s, and it clearly belongs to a radically different context than Tatlin’s. There’s no need to be reductive. But if we, like Saraceno, are to be attentive to “how things get connected,” it seems only appropriate to respond in equally diverse and creative ways.

For Saraceno, that can evidently mean a variety of things: a close consideration of the silky skeins of two distinct spider webs; an acknowledgement of the relationship between artwork and art institution; a dynamic involvement of the mobile viewer. And for us? This show of his work offers a chance to think associatively, on various planes – even as we also give ourselves over to the simpler pleasures of geometry and light bound in the service of beauty and delight.

Photographs courtesy of Kerr Houston, The Baltimore Museum of Art, and Obras MNBA.