Entropy and the Old Monuments 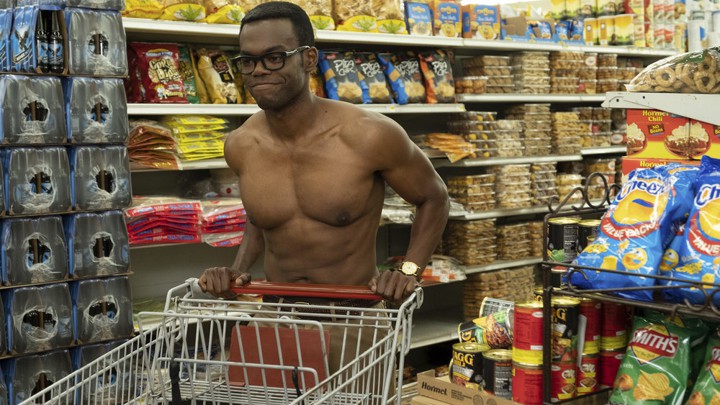 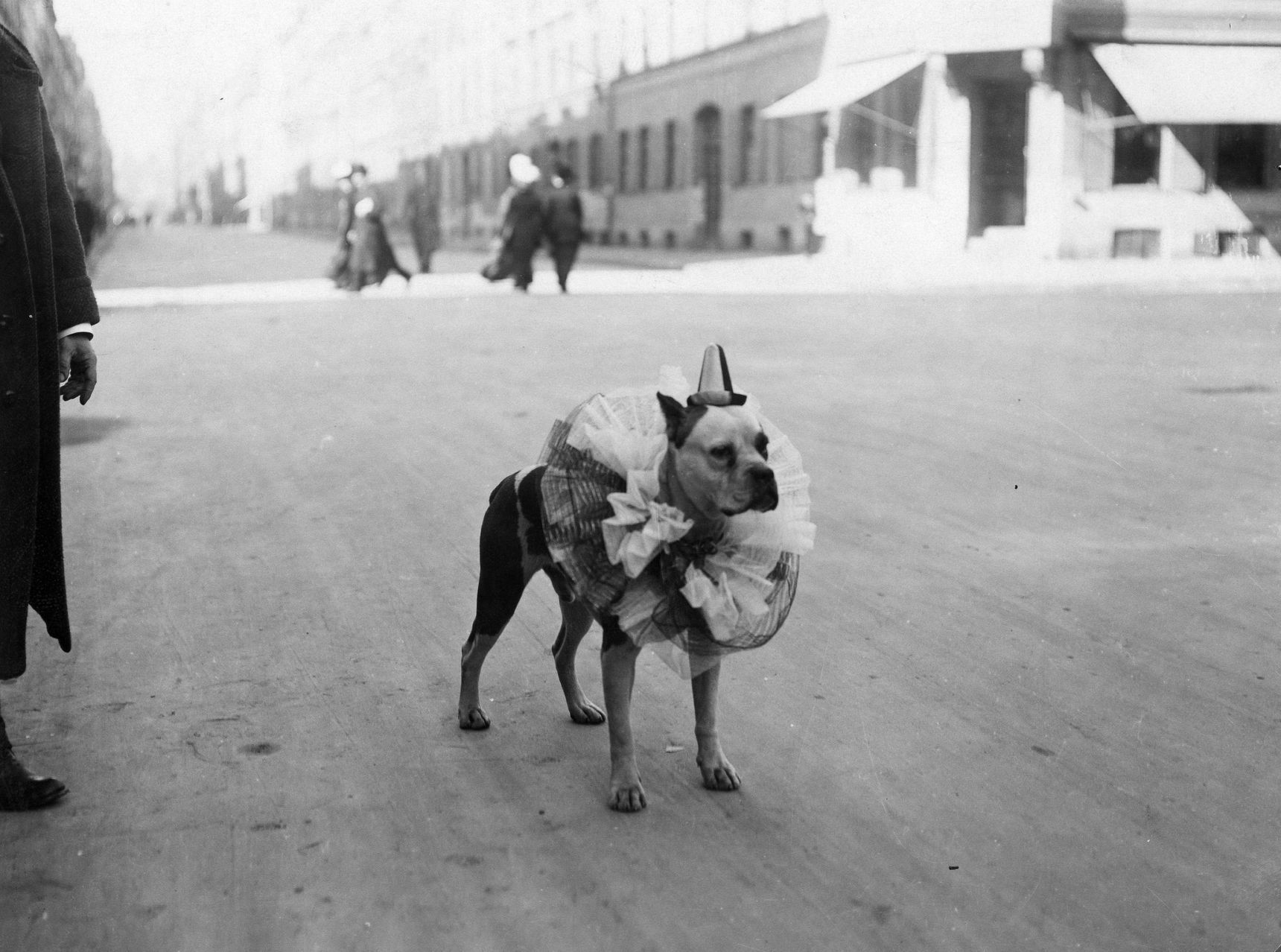 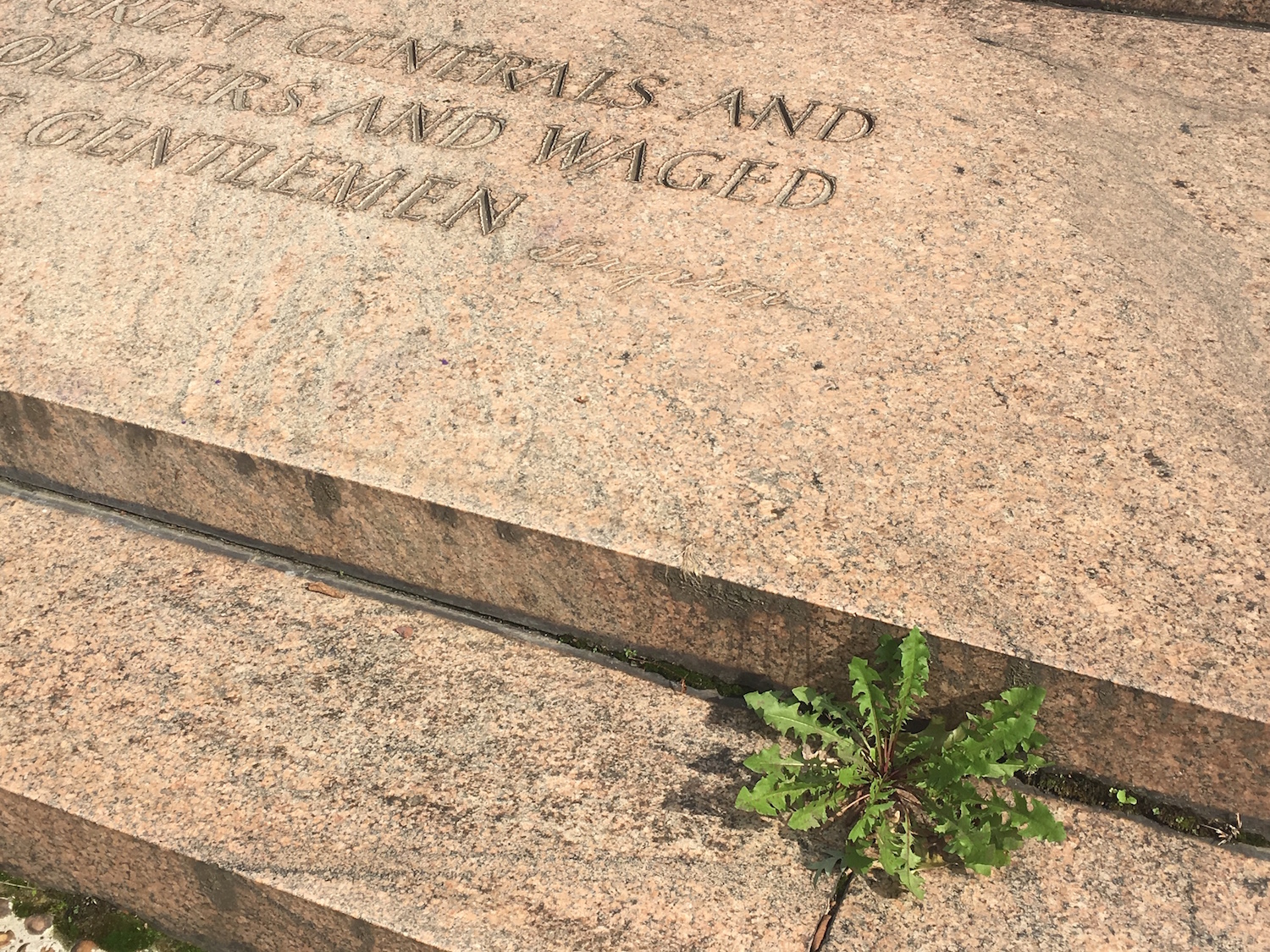 Since the City of Baltimore removed, in August of 2017, four monuments with Confederate associations, the remaining plinths have evolved in unpredictable and interesting ways. For a time, a few potted plants were all that stood on the stone platform that had once supported massive bronze equestrian statues of Robert E. Lee and Stonewall Jackson, in Wyman Dell; they are now gone, but a large weed has sprouted from the join of two stairs. On University Drive, the inscription on the base of the Confederate Women’s Monument, which originally celebrated the work of nominal heroines, now culminates in a fluid, handwritten addition. And in Bolton Hill, the plinth of the Confederate Soldiers and Sailors Monument is now dotted with stickers and dozens of skeins and blotches of red paint.

These changes are largely random, the result of impetuous decisions and chance more than forethought or care. In short, they feel entropic – although that term deserves some explanation. In a 1966 essay entitled “Entropy and the New Monuments,” the artist Robert Smithson argued that a number of contemporary works of sculpture and architecture embodied a dullness and an absence of energy; blank forms and listlessness struck him as recurrent features. Such works thus recalled, to the erudite Smithson, the Second Law of Thermodynamics, which he read as implying that the entire universe is undergoing an inevitable loss of energy and a corresponding drift towards homogeneity. (Or, as Smithson put it, “in the ultimate future the whole universe will burn out and be transformed into an all-encompassing sameness”). Thus, the gelid surfaces of Minimalism and banal strip malls of America were harbingers of the degradation of the universe: premonitions, in Smithson’s view, of an inexorable “energy-drain.”

Smithson’s invocation of entropy in that article was, it’s fair to say, idiosyncratic (after all, the First Law of Thermodynamics insists upon the conservation of energy, obviating any systematic loss of energy). But a year later, in “The Monuments of Passaic,” he returned to the concept of entropy, and now presented it in a more conventional manner, equating it with disorder. Imagine, he urged his readers, a “sandbox divided in half with black sand on one side, and white sand on the other. We take a child and have him run hundreds of times clockwise in the box until the sand gets mixed and begins to turn grey; after that we have him run anti-clockwise, but the result will not be a restoration of the original division but a greater degree of greyness and an increase of entropy.” Entropy, here, is the degradation of order – and it can only intensify. The center cannot hold; structure will yield to chaos. 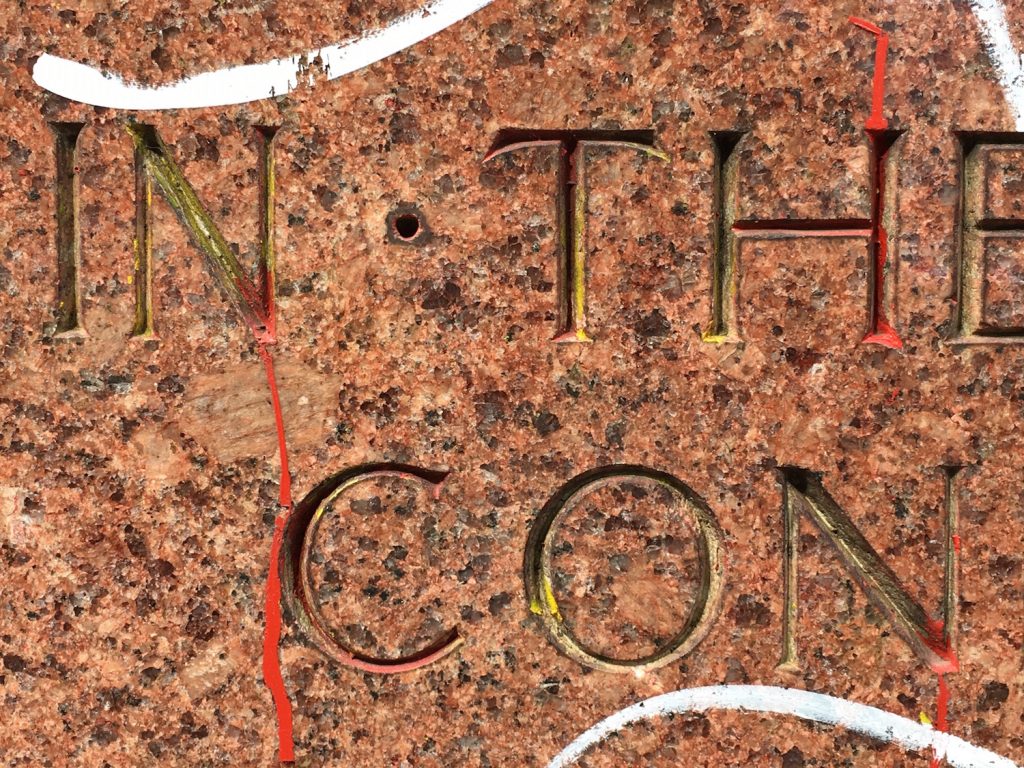 And so a question comes to mind: might the remaining bases of Baltimore’s Confederate monuments be usefully seen as contemporary embodiments of entropy? Look again at the trickling rivulets of paint, and at the rough, irregular borders of the marks as the pigments weather. Consider the jagged negative spaces left in the posters partly torn away by some disenchanted observer. To be sure, some of the changes – the graffiti, for instance – are intentional, and composed. But even these manifest a certain entropic quality. The stately, engraved inscription on the base of the Confederate Women’s Monument (“They fed the hungry, clothed the needy, nursed the wounded…”) now concludes with a hastily written addendum, in white paint (“…to deffend a pacular instition.”).

The reference is to slavery, which was euphemistically characterized by some supportive Southerners as a “peculiar institution.” The appended text thus reminds us of a larger, damning context. But its casual layout and multiple misspellings challenge the sculpture’s logic in another way, too, as the carefully centered inscription gives way to a less ordered composition, and the traditional rules of spelling are brazenly discarded. And so “the material world moves,” as Rudolf Arnheim observed in his 1971 book Entropy and Art, “from orderly states to an ever-increasing disorder.” 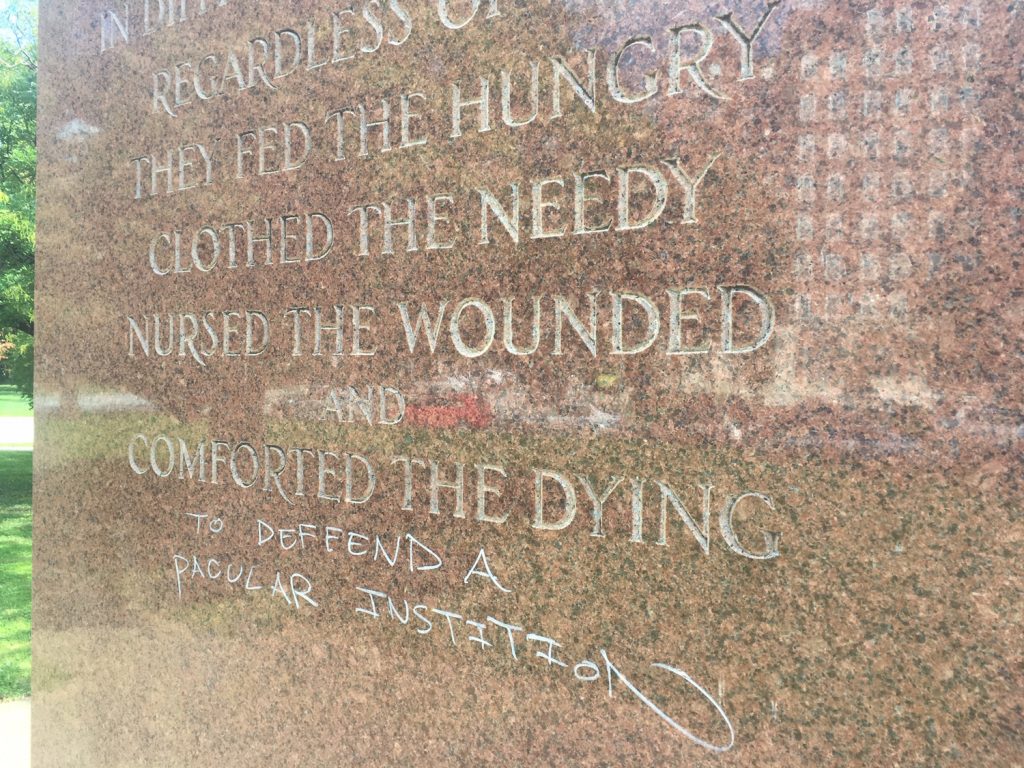 As a physical fact, this may seem rather unremarkable. But on an abstract level, it is deeply noteworthy. For the monuments were built, of course, to honor a society built around slavery and structural racism: the Confederacy was nothing, you might say, if not ordered. And indeed, the very notion of entropy proved deeply threatening to many 19th-century theorists interested in preserving a supposed racial purity. Two of the best-known of these so-called degenerationists were Arthur de Gobineau, who argued in 1855 that miscegenation would lead to social chaos, and Henry Hotze, a white supremacist who once characterized the North as a “mongrel compound.” These were thus men who celebrated order, stasis, and the status quo: the very qualities that are now being challenged as the empty plinths about Baltimore evolve and decay. Instead of being merely random, then, the signs of entropy can also be read in political terms, as a challenge to an inhumane ideology.

Embracing entropy can be difficult. In many contexts, and for understandable reasons, we generally value order. But accepting decay can also be liberating, in several senses. This is true in an aesthetic sense – as Jean Arp realized, in making collages made from torn paper in the 1930s. “Why struggle for perfection, purity” he wrote, “when they can never be attained. The decay that begins immediately on completion of the work was now welcome to me. Dirty man with his dirty fingers points and daubs at a nuance in the picture. The spot is henceforth marked by sweat and grease … The dying of a picture no longer brought me to despair.” But it can also be true in an ideological sense, as Smithson seems to have realized in the final words of “The Monuments of Passaic.” One of the fundamental appeals of film, he notes, is its ability to record; in doing so, it offers an apparent solution to physical dissolution. But even film crumbles, given time; the immortality that it seems to promise is ultimately false, and the images of celluloid idols will inevitably degrade. Or, as Smithson memorably put it, “the superstars are fading.” 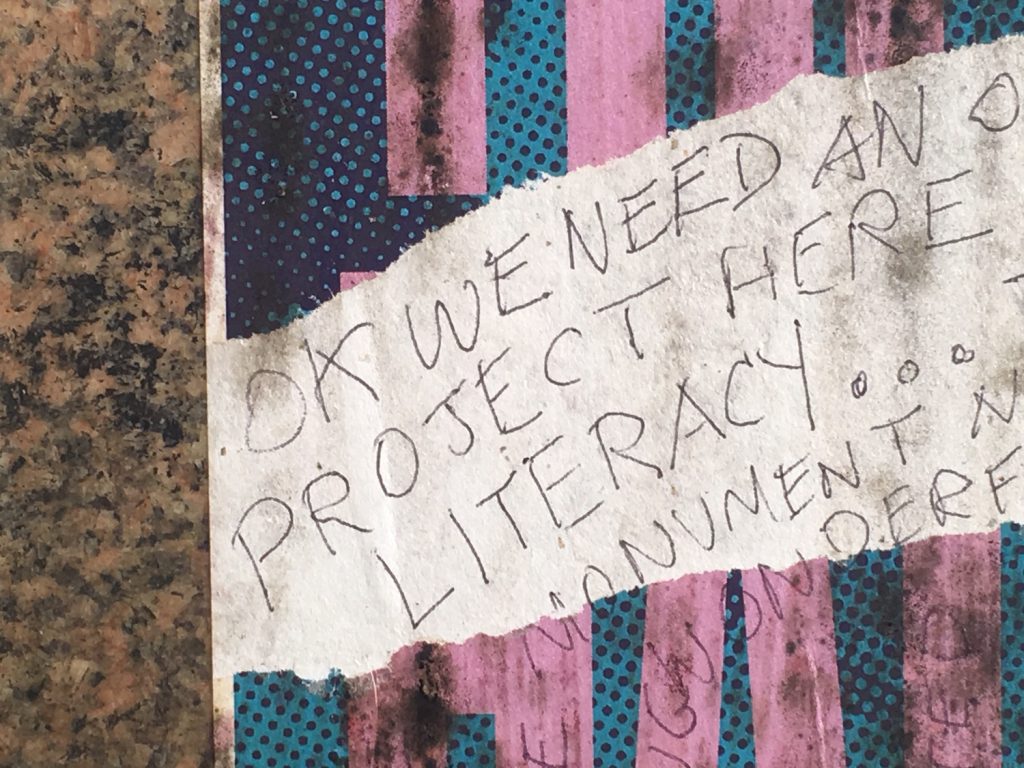 So they are – or disappearing, entirely. Where Lee and Jackson once sat, upon their horses, an uneven and roughly hewn plane of granite now stretches before us. Leaves momentarily settle upon it, and are then blown to the ground. On the base that once supported a sculpture of a badly wounded Confederate soldier, spray-painted tags cavort across tidy rows of chiseled letters and illegible palimpsests testify to the erasures of other texts. And as Roger Taney sits in storage in an undisclosed location, the grass about his empty plinth grows in riotous disorder.

When Smithson first began to explore, in print, the notion of entropy, he was fascinated by the idea that the future might resemble the past: both, he proposed, consisted of oblivion, and the two could thus perhaps be conjoined. As he pushed his thinking further, though, he came to realize that time is irreversible, precisely because of the steady and irresistible increase in entropy.

There is, simply put, no going back. But there is also, I would add, no standing still. Baltimore’s Confederate monuments sought to preserve a specific time and an order, and to resist change and admixture. But they are now visible sites of action, mutation, and evolution. New forms intermingle with old ones; traditional figuration and geometric clarity yield to something varied and unpredictable. And what you make of this entropic process will say a lot about what you make of the world.