Behind the Floating World 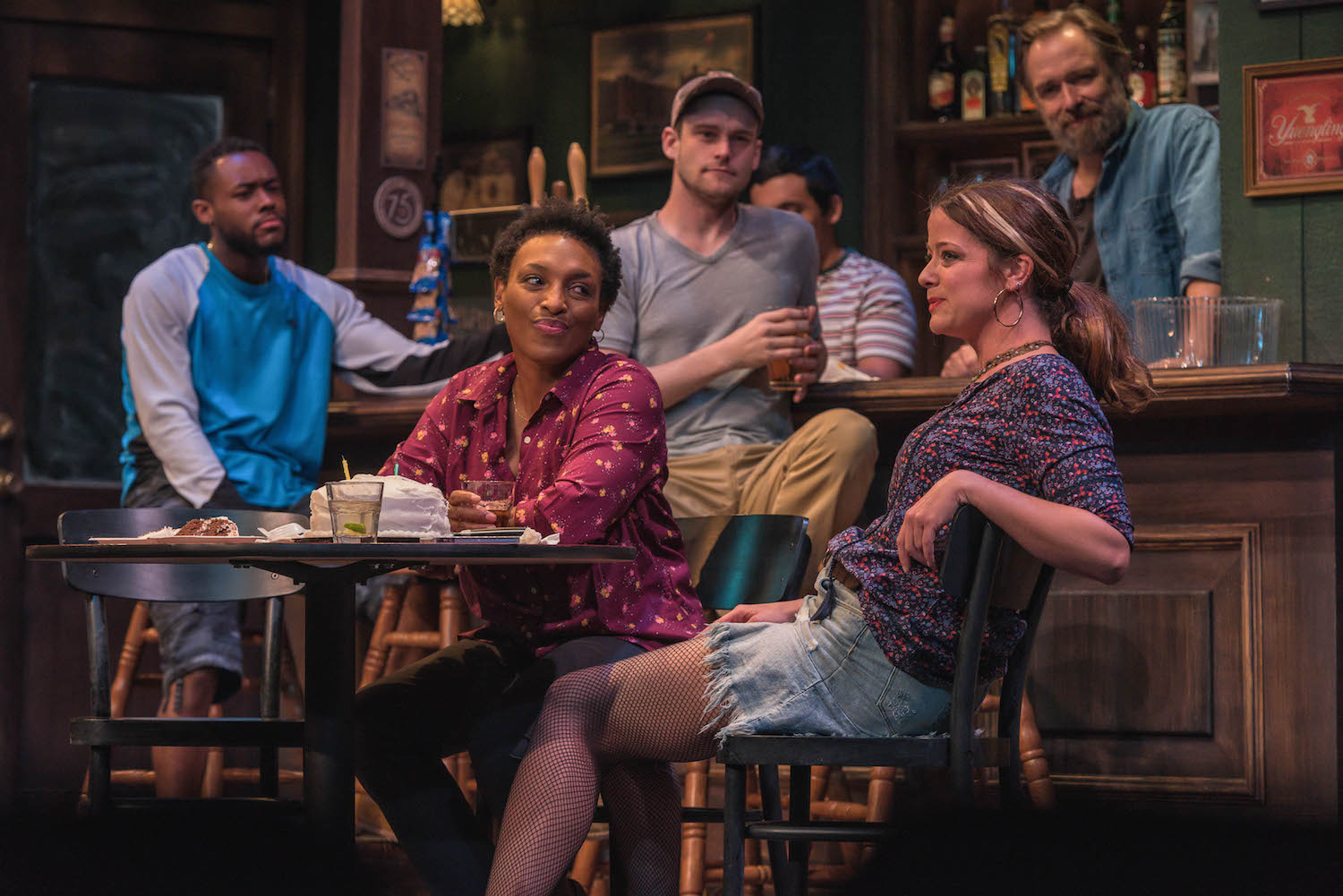 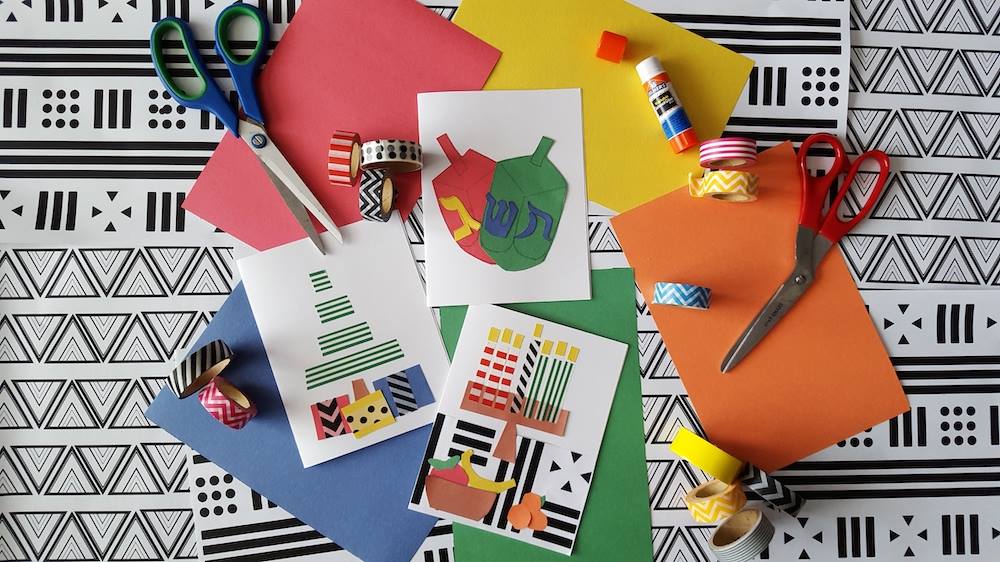 Visual Art
Behind the Floating World 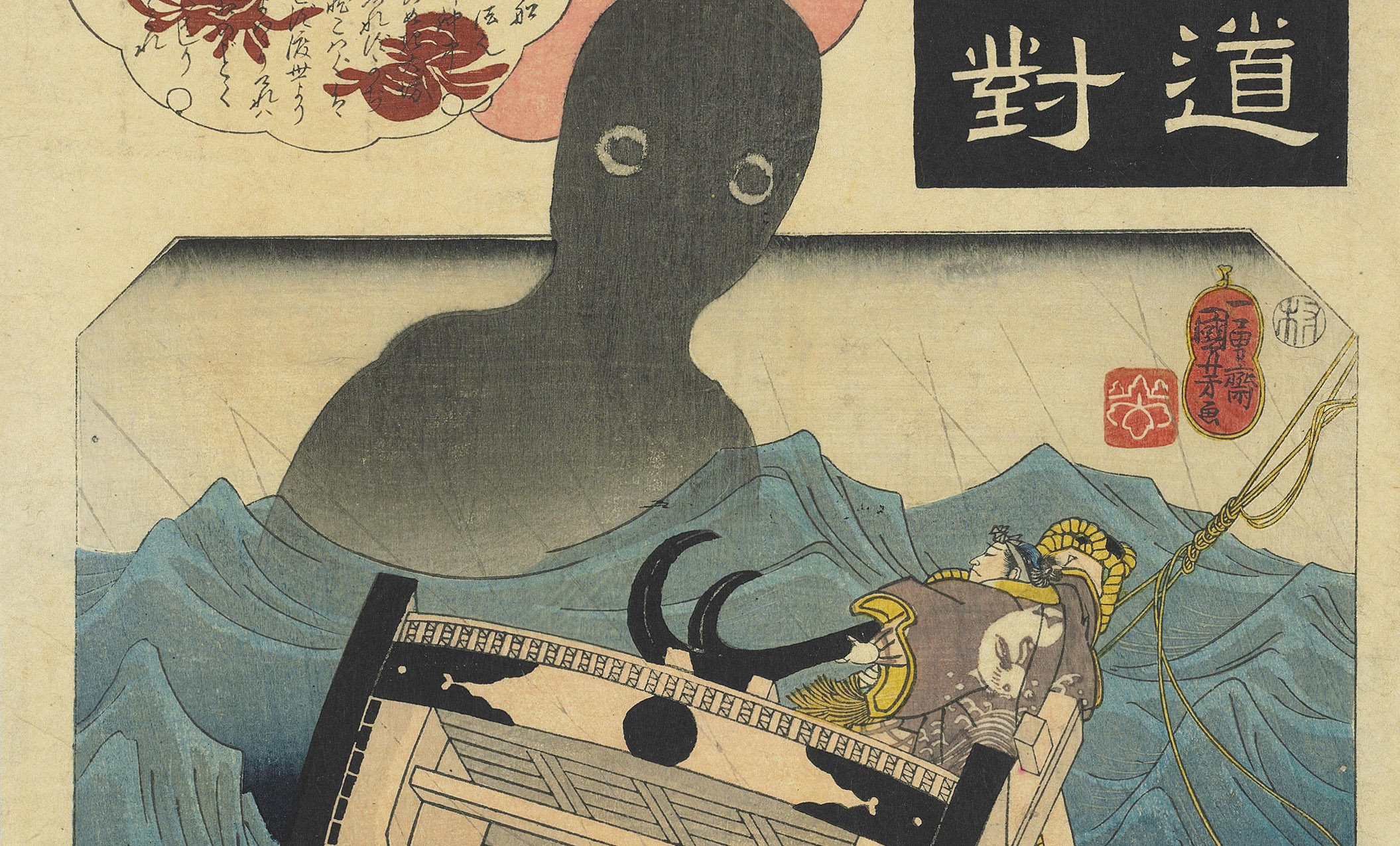 Japanese Woodblock Prints: The Art of Collaboration at The Walters Art Museum by Kerr Houston

Certainly you could argue that Tokuzo should have stayed home. After all, Japanese tradition had long held that the last day of the year was no time for sailing. And now, having openly tempted fate, his ship is threatened by a rollicking storm and a massive wraith who rises ominously out of the water. But wait: for there stands Tokuzo, as immobile as a boulder on the heaving deck, utterly composed as he declares that nothing is as frightening as navigating in this world. His claim is part sheer bravado, perhaps – but it also feels almost philosophical, as it recalls the ancient Buddhist emphasis on the difficulty of resisting earthly temptations and fugitive pleasures. Part headstrong and part sage, then, Tokuzo is a man whose experience and wisdom allow him to stare danger in the face, and to coolly defeat it.

Designed by Utagawa Kuniyoshi in 1845-6, the image of Tokuzo at sea is one of thousands of woodblock prints produced during Japan’s Edo period (1603-1868). Known collectively as ukiyo-e (the term simultaneously evokes a hedonistic superficiality and a world-weariness), these were lively images that portrayed a range of subjects. Some depicted beloved stories, celebrated vistas or famed wrestlers and actors; others, aimed at the sizable military community in Edo (now Tokyo), depicted the nearby pleasure quarters, and could be decidedly bawdy. Relatively inexpensive, they were widely disseminated – and yet some of them were the work of renowned masters, and were enthusiastically collected.

And they were also, as the Walters Art Museum demonstrates in a current exhibition (Japanese Woodblock Prints: The Art of Collaboration, through January 9), the result of a complex process of production: an intricate choreography that involved painters, carvers, printers, and publishers. Curated by Amy Landau and Elisabetta Polidori, this crisp, appealing show is divided into sections, each of which details a stage of the production process. Several dozen prints form the primary evidence, but the show also includes a number of tools and materials related to the production process, a video of a contemporary carver at work, and a couple of hands-on exercises. The result is illuminating without being overly didactic: you’ll almost certainly come away with a renewed respect for the considerable work that went into every single print. 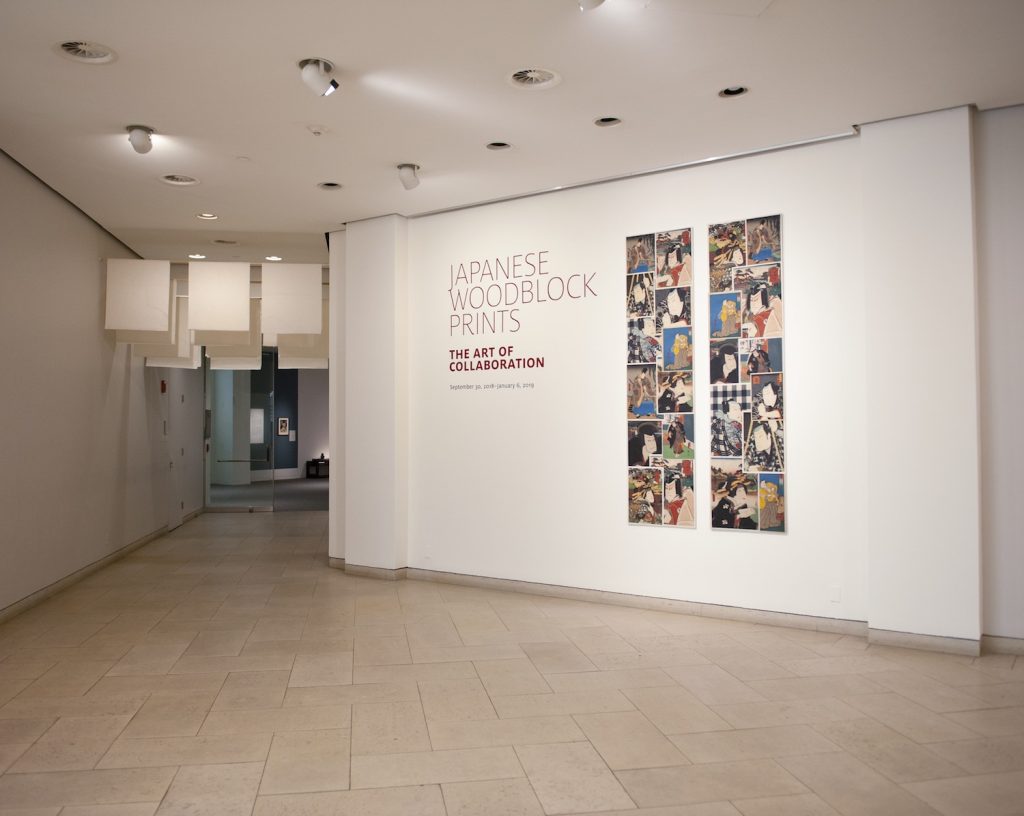 That’s not to say that this is a completely new angle on the material. It’s not, as the curators seem to lean heavily on Rebecca Salter’s 2006 study of Japanese popular prints – reiterating, for example, her observation that the prints generally sold for about the price of a bowl of noodles, and echoing her book in employing an 1857 image of a print shop as a concluding example. Similarly, sections of the show dedicated to the registration process – in which plates were precisely aligned – and the arrival of imported European pigments in the later 1800s reiterate ideas already explored by other scholars.

Still, it would be a mistake to call the Walters show unoriginal. Rather, its contribution lies in its judicious use of compelling original examples and illuminating supplemental materials. Relying almost exclusively on the museum’s permanent collection, Landau and Polidori effectively employ a range of prints as pieces of evidence related to the process of manufacture. In one especially creative installation, we are shown the back of a print, which reveals the numerous marks left by the printer’s baren as he vigorously pressed down on the mulberry paper. In another vitrine, details in five prints are isolated, as a means of identifying some of the various techniques used by painters and printers. And those imported European colors? A late Edo print features a sea of Prussian blue, illustrating the fact of influence in unmistakably visual terms. Built around specific examples, this is art history at its most happily concrete.

In the process, two central themes emerge: the sophistication of the printmaking industry in Edo Japan, and the decidedly handmade quality of the prints. Both of these ideas, it’s worth noting, are relatively abstract, or external to the prints themselves – and thus represent potentially difficult subjects in a museum show. Unsurprisingly, the curators rely rather heavily on wall texts: come ready to do some reading. But the very structure of the show and the diverse nature of the supplemental displays are also markedly effective. Elegant banners announce transitions between the basic stages of production, and as we walk through the show we retrace the process by which a print was made. Or we can even emulate it, by trying our hand at inkbrush painting (water brushes are provided) or at working a baren. Far from superfluous, these interludes communicate the importance of manual, technical skill at least as efficiently as any textual assertion. 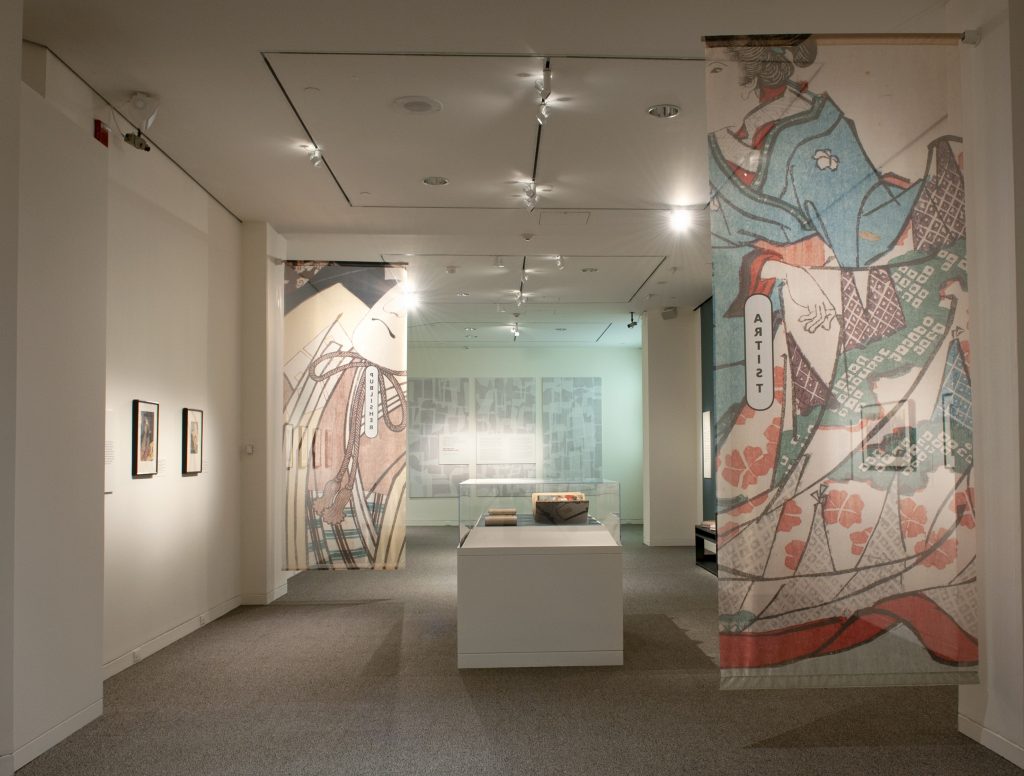 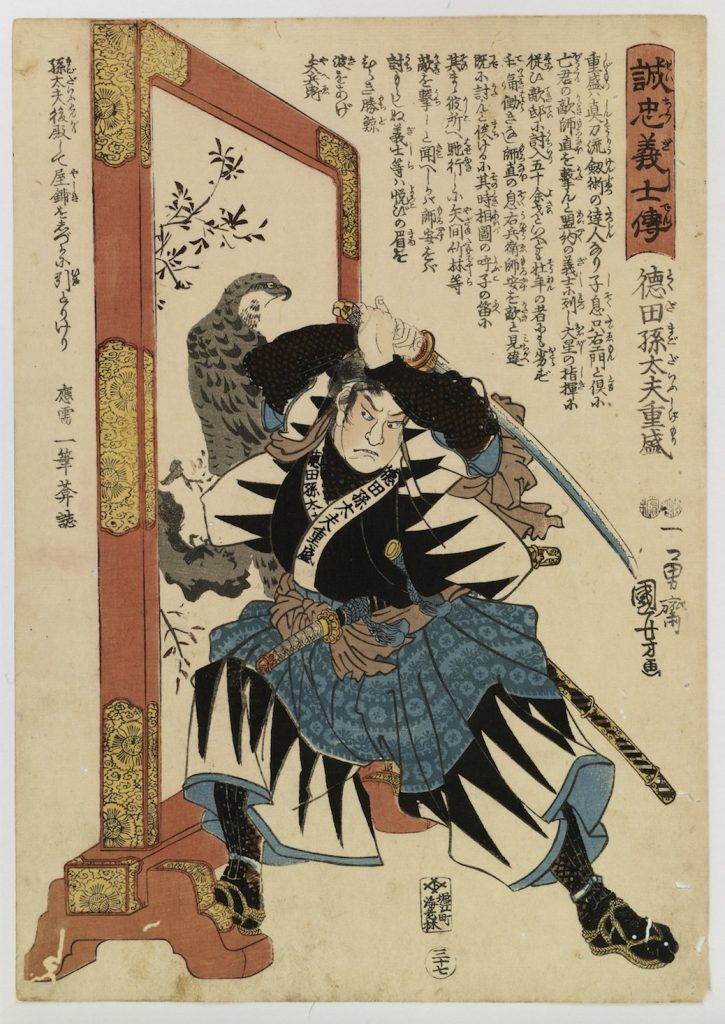 Unsurprisingly, though, it’s ultimately the prints themselves that are the stars of the show. Usually produced as single folio images in a limited range of standard sizes, and sometimes issued in series, ukiyo-e were remarkably diverse objects. Some aimed at a subtle lyricism or courtly erudition, while others embraced a vigorous raucousness or coarse humor. And while some impart a respect for the placid beauty of natural landscapes, others are shot through with a compressed vigor.

In an image of the samurai Tokuda Magodayu Shigemori designed by Utagawa Kuniyoshi, for instance, the fencer is a study in virile energy. Raising his blade with both hands, he mirrors the intense vigilance of the painted bird next to him – even as the violent diagonals of his garments and pose contrast with the stately stability of the screen. Meanwhile, in Kitagawa Utamaro’s image of the famed courtesan Hanazuma, the subject is conceived in terms of a sheer calligraphic elegance: an effect furthered through the placement of a partially unfurled scroll. It’s a virtuosic work, largely dependent on the carver’s ability to recreate the fluidity of the paintbrush – and it encourages us to trace the extended lines, and to delight in the acts of looking closely and comparing forms. Artists’ signatures and the marks of censors’ seals hint at the complex creative negotiations that underlay such works, but the images themselves cohere, yielding a spectrum of distinct tonalities. 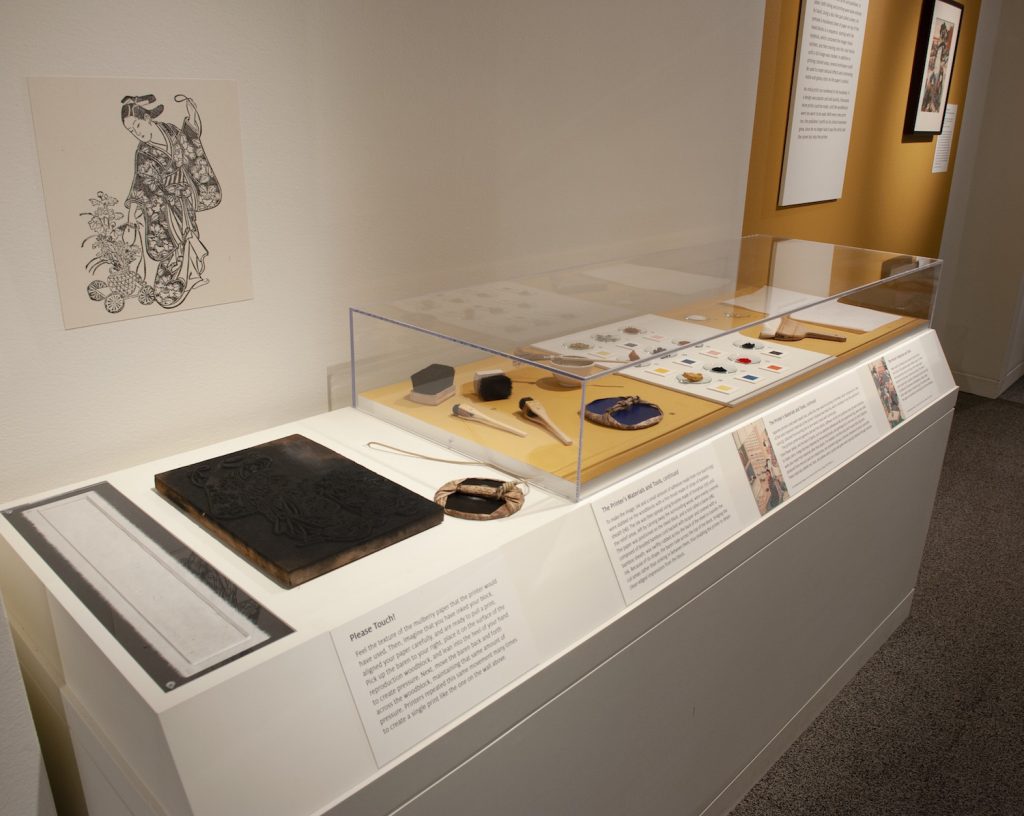 The show ends in a self-referential manner, with an enlarged photograph of an Edo period print that depicts the lively activity surrounding a print shop. Near the center, a well-dressed woman bends slightly in order to study a printed, colored image of a rugged male figure; her intense interest is clear. In an obvious sense, the image works as a summation of the Walters’ exhibition: the print that she holds, we now understand, is the result of a complicated process.

And yet, the image raises an interesting question: might the viewer, too, be considered a part of that process? Since the 1980s, art historians have invoked reception theory in noting that diverse viewers often respond in diverse ways to artworks, often contributing their own readings and creating a range of possible meanings. Moreover, specialists such as Timon Screech have noted that Edo period viewers prints could use prints as sources of inspiration, as evidence of their own sophistication, or even as erotic aids. The concluding image in the Walters’ show thus hints at the role of the viewer, but evinces little interest in exploring it fully, proposing instead a conventional notion of artistic production as preceding the viewer. More is possible here.

Ultimately, though, exhibitions should be judged primarily on what they’re trying to do, rather than what they might have done. And the Walters’ show does a fine job of articulating and illustrating the complex sequence of steps that lay behind the production of an important genre of prints. So we might admire the cool implacability of Tokuzo, who still stands unfazed beneath the looming monster. But we can also admire the precise series of interrelated decisions and actions that yielded such an image. Indeed, the most impressive accomplishment of this exhibition may lie in its ability to show us how these two ideas – process and form – are inextricably related. Having taken in this exhibition, you may thus never see the floating world in quite the same way again.

Japanese Woodblock Prints: The Art of Collaboration showcases more than 40 lively prints dating from the 18th through 19th centuries from the Walters’ collection and will be up through January 6, 2019 at The Walters Art Museum.

Top Image: (Detail of) Utagawa Kuniyoshi, Kuwana: The Story of the Sailor, c. 1845-6, Photograph courtesy of The Walters Art Museum