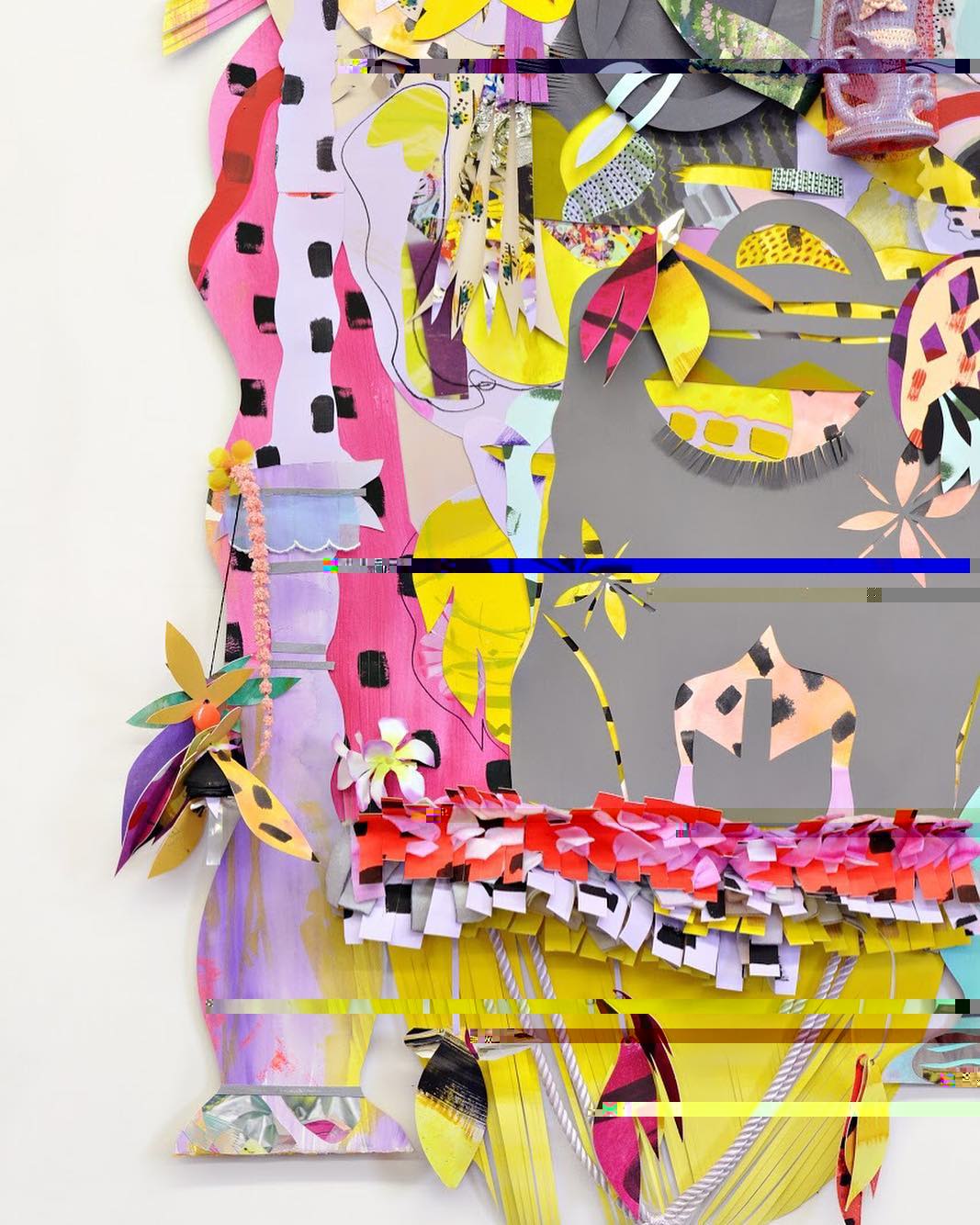 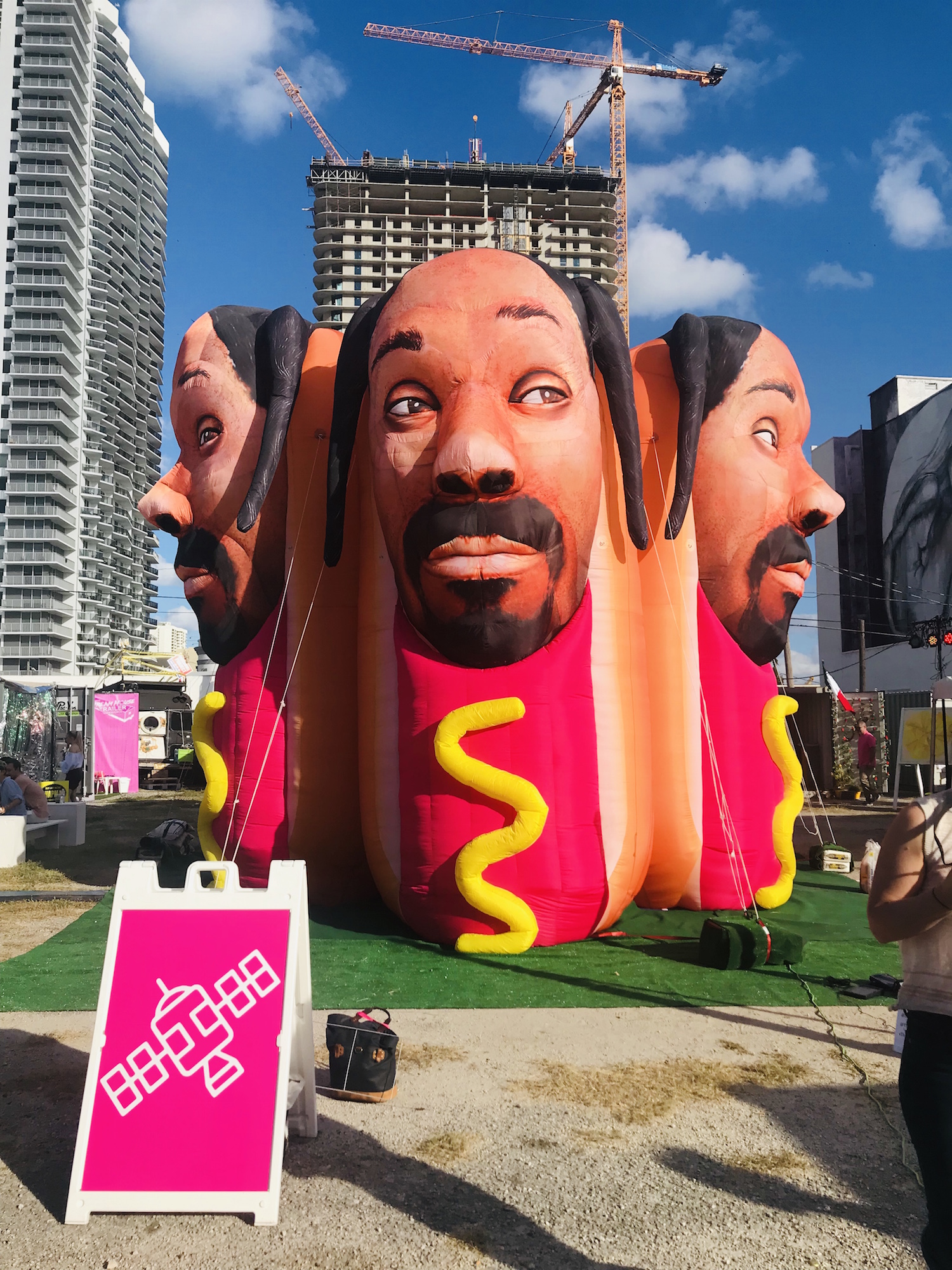 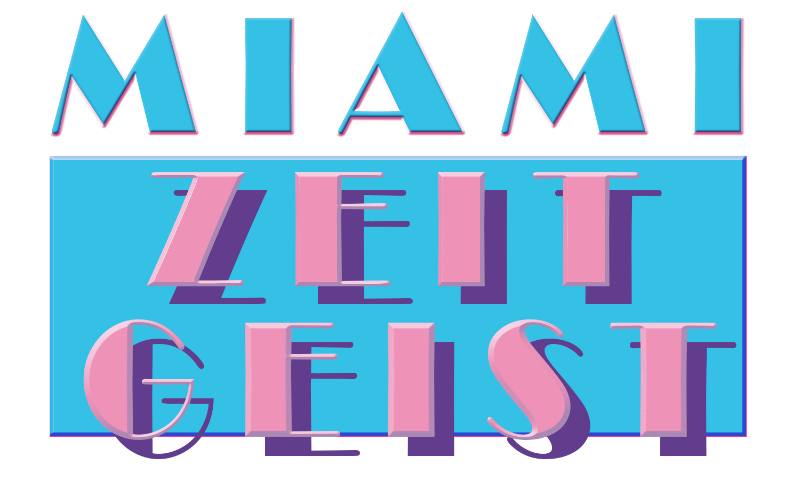 Themes, Content, Materials, and Aesthetics across all the Art Basel Miami Fairs by Michael Anthony Farley

Love or hate art fairs, there’s no denying that they’re one of the best opportunities to get a sense of what’s on the global art world’s hive mind. That’s especially true during Miami Art Week, when literally thousands of galleries, from Beijing to Bogota, send (what they consider) their best and brightest to any one of the countless fairs or pop-ups scattered around South Florida. My annual favorite game is to spot what’s #trending in the worldwide art zeitgeist.

Here are some good and/or weird ones:

Pants Are the New Plants. 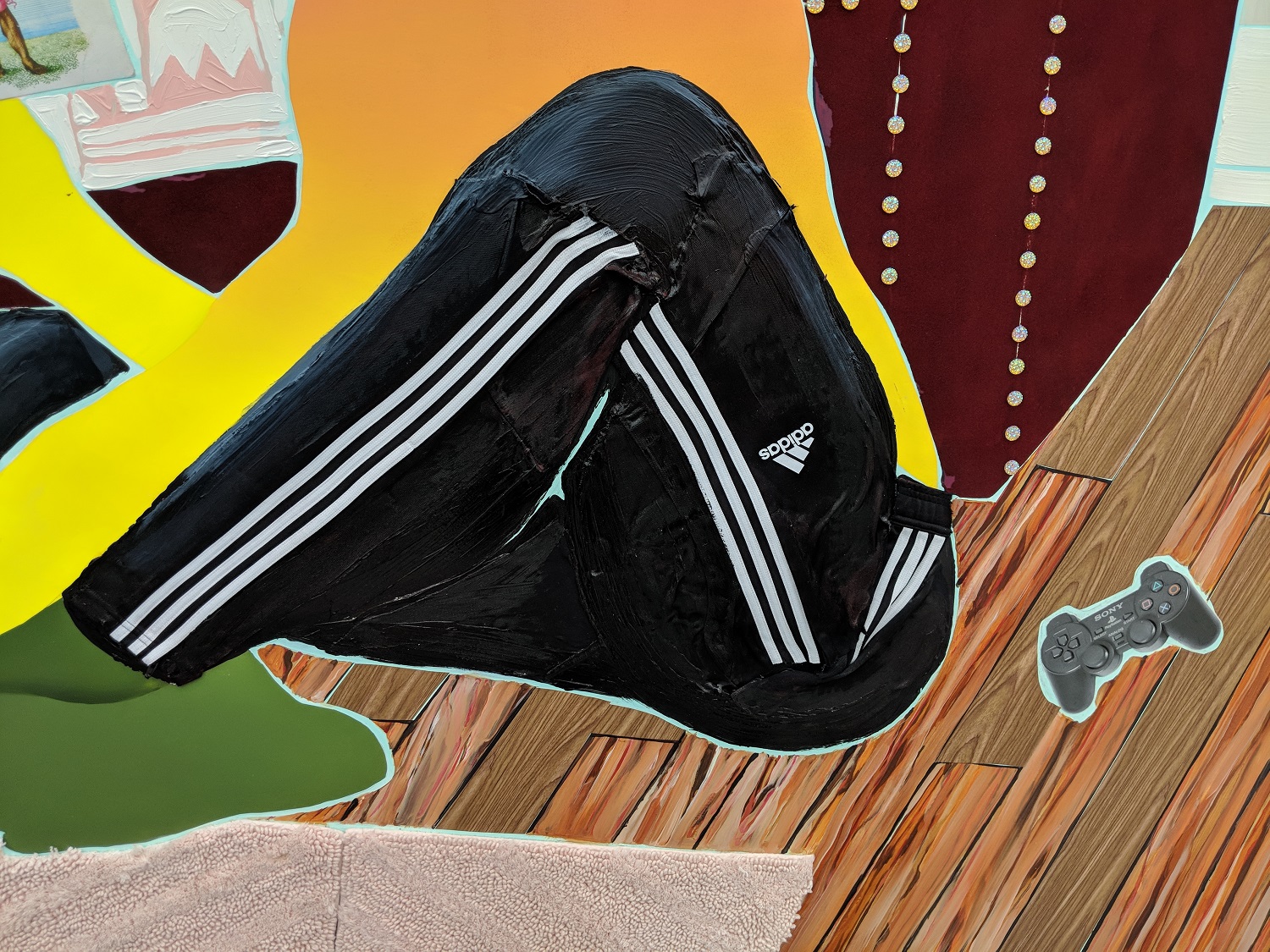 Just as no #aesthetic mixed-media artwork was complete without a ficus lyrata and tube of pink neon these past few years, pants are the new must-have accessory for painting. Pants can be physically appliqued to a canvas as a collage material, dangle off the picture plane to break the fourth wall, or even be digitally printed onto IKEA table tops (as in the case of Cory Arcangel’s delightfully atheleisure-ready diptych). This trend is an absolute head-scratcher to me, but I’m kinda into it.

Coincidentally, I was literally just last week trying to brainstorm what to do with the box of jeans with holes in the crotch I refuse to throw out because I feel horribly guilty every time I participate in the beginning or end of a garment’s life-cycle because the fashion industry is so fucked. Anyway, paint-splattered pants are seldom a good look, but pants-splattered paintings are so hot right now. 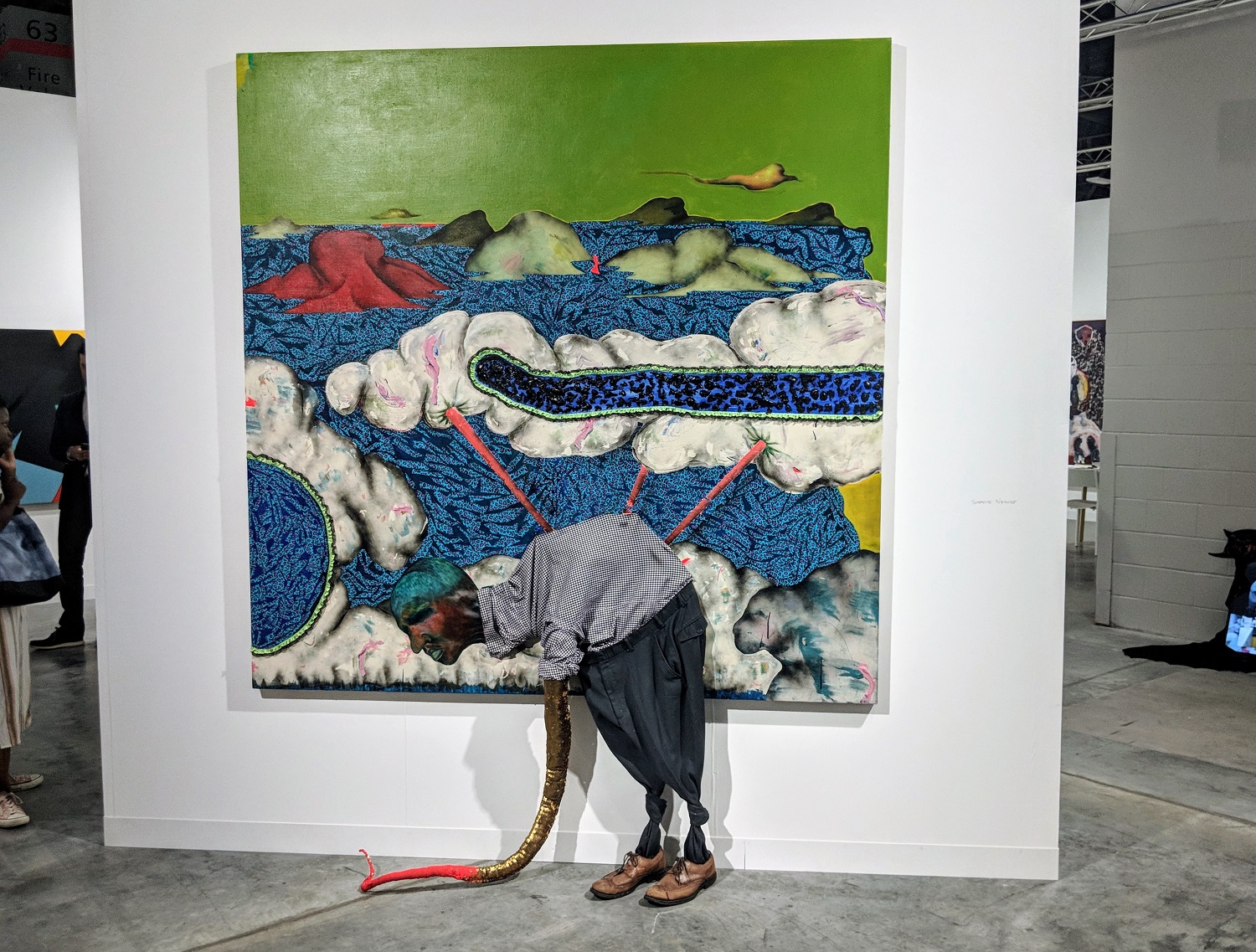 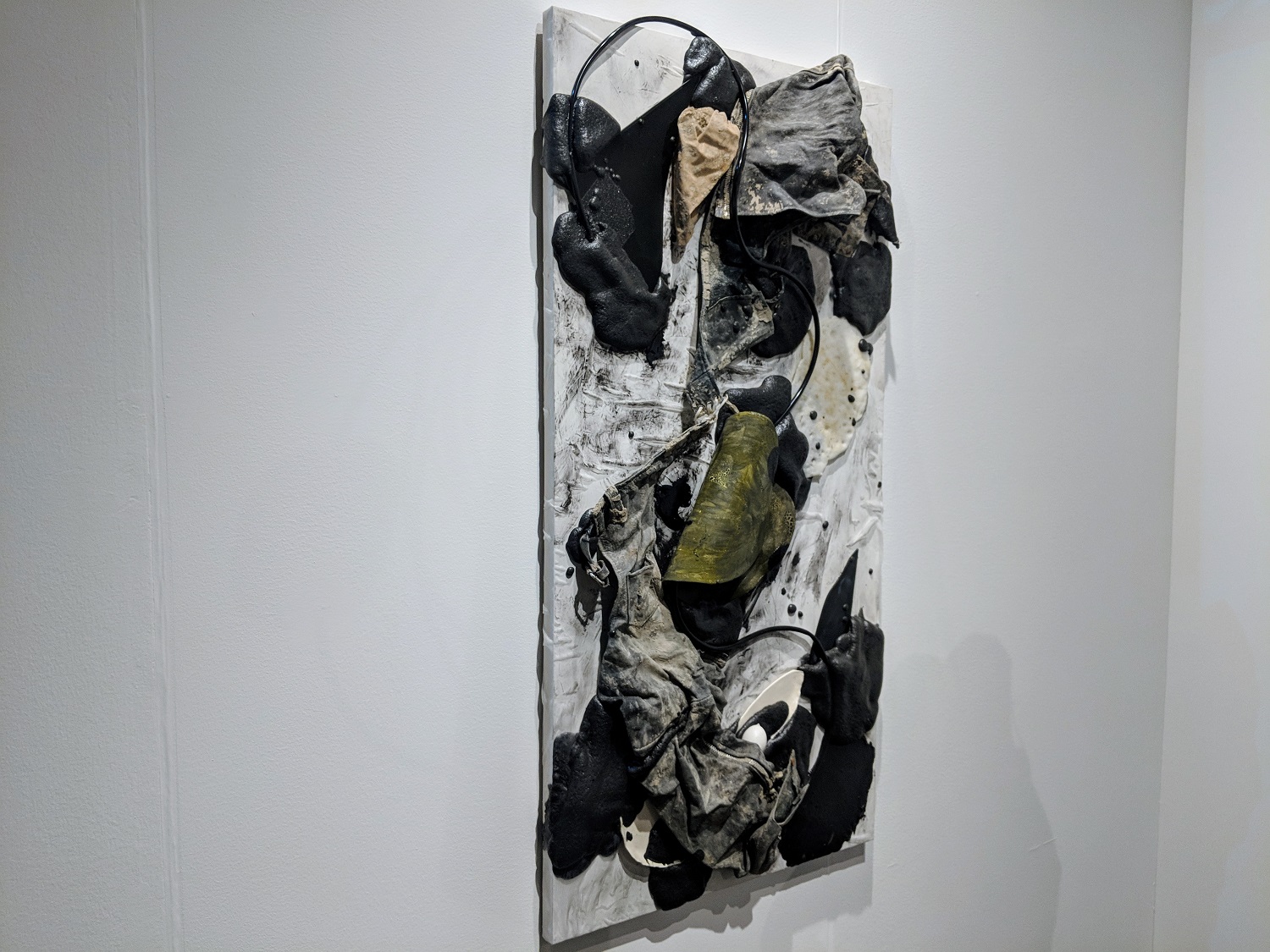 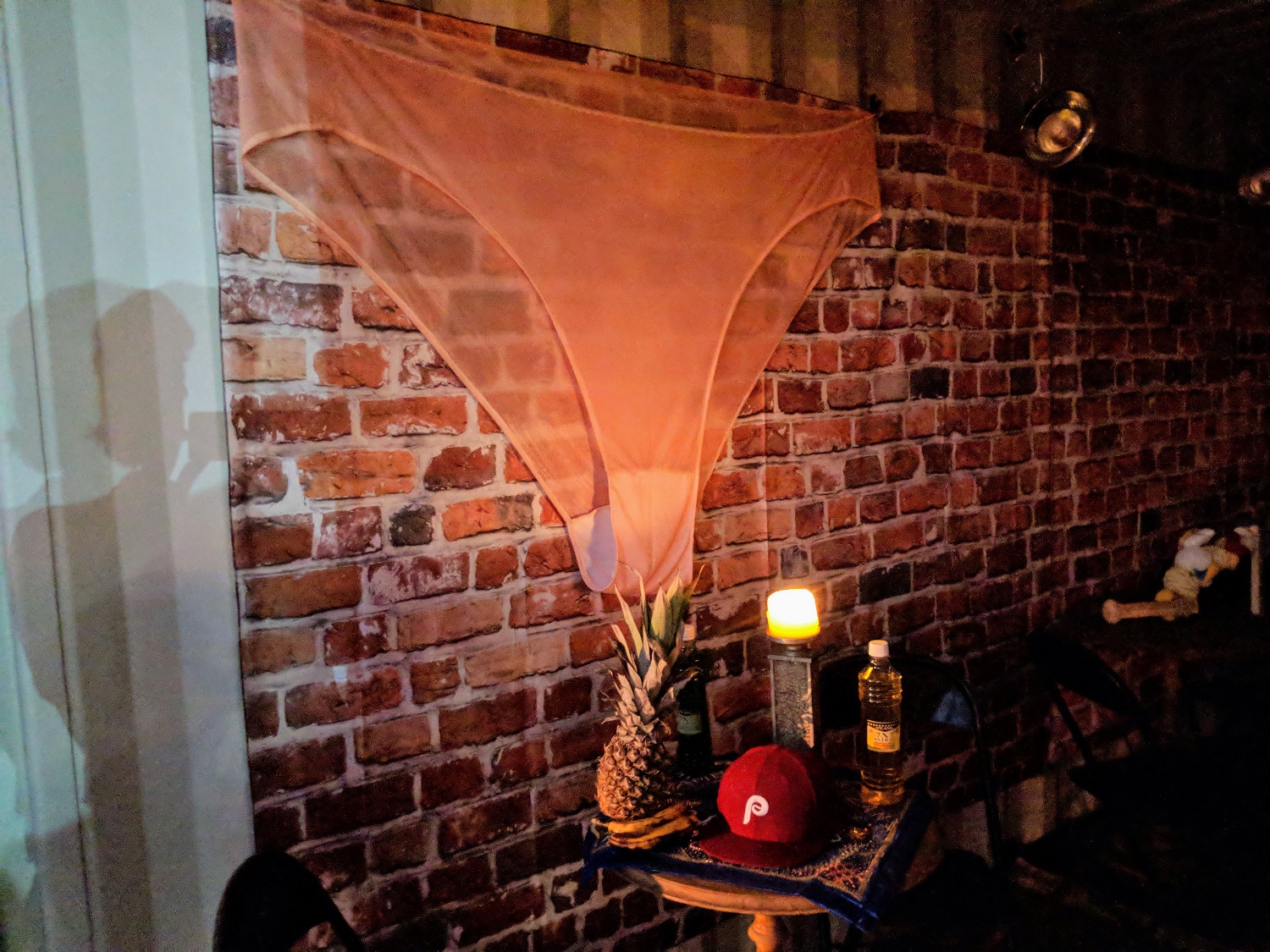 Tanga’s installation at the Satellite Fair featured a giant pair of panties. 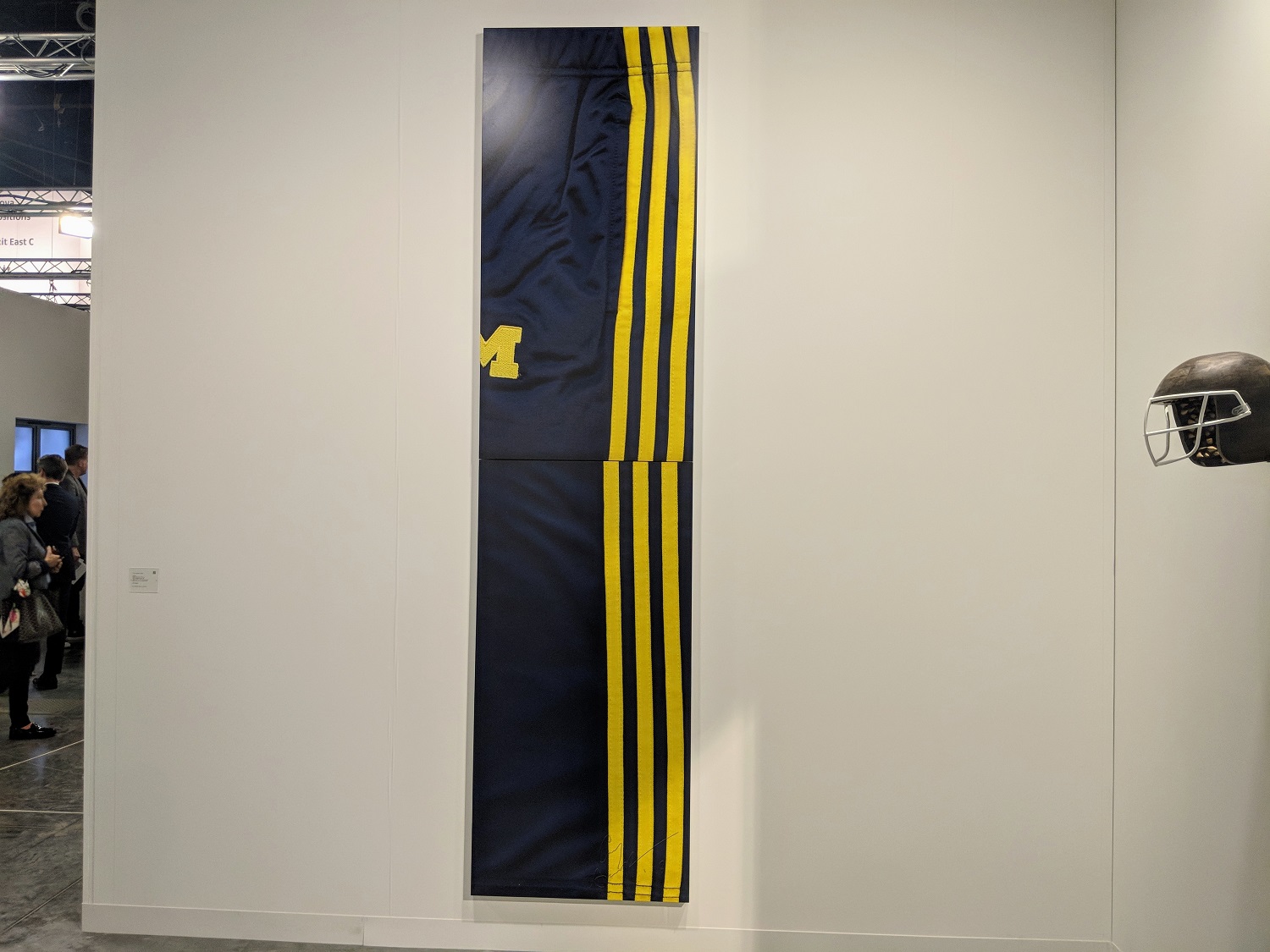 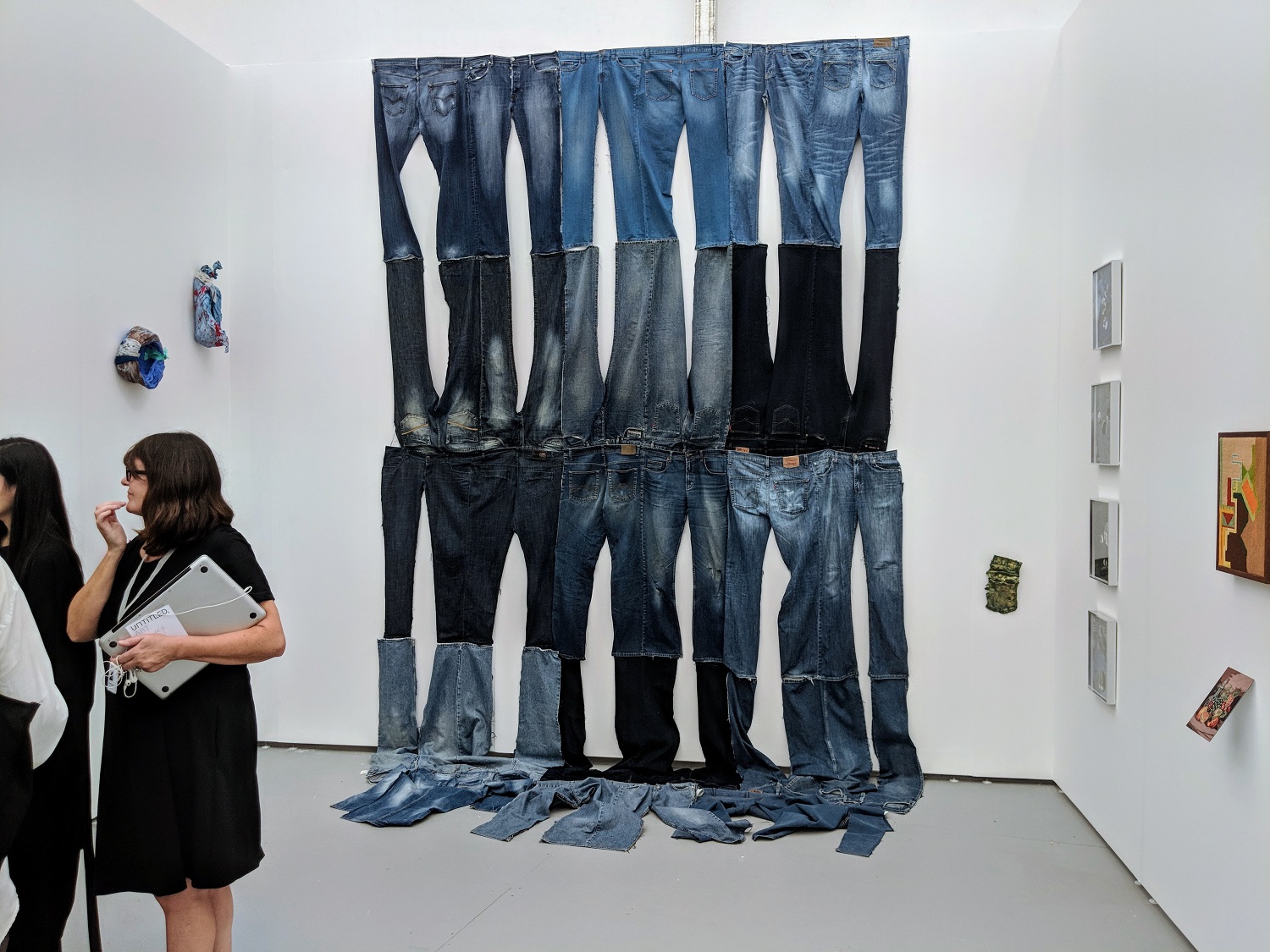 Jacopo Miliani repurposed these pants as a giant tapestry at  Gallery Rosa Santos’ (Valencia, Spain) Untitled booth. Below, a shot of the artist’s zine with a homoerotic visual history of jeans from Warhol works to sapphic early 90s fashion ads: 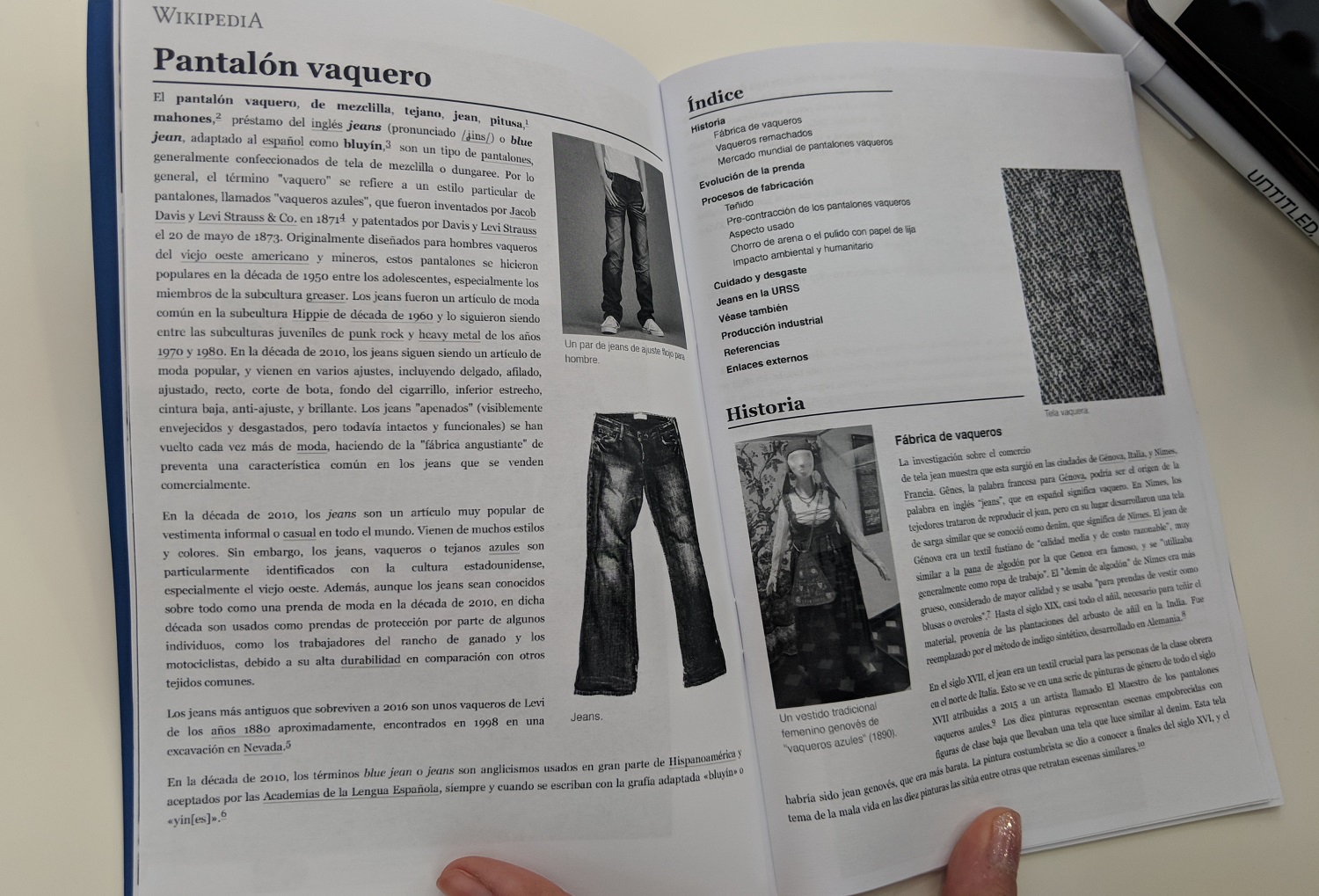 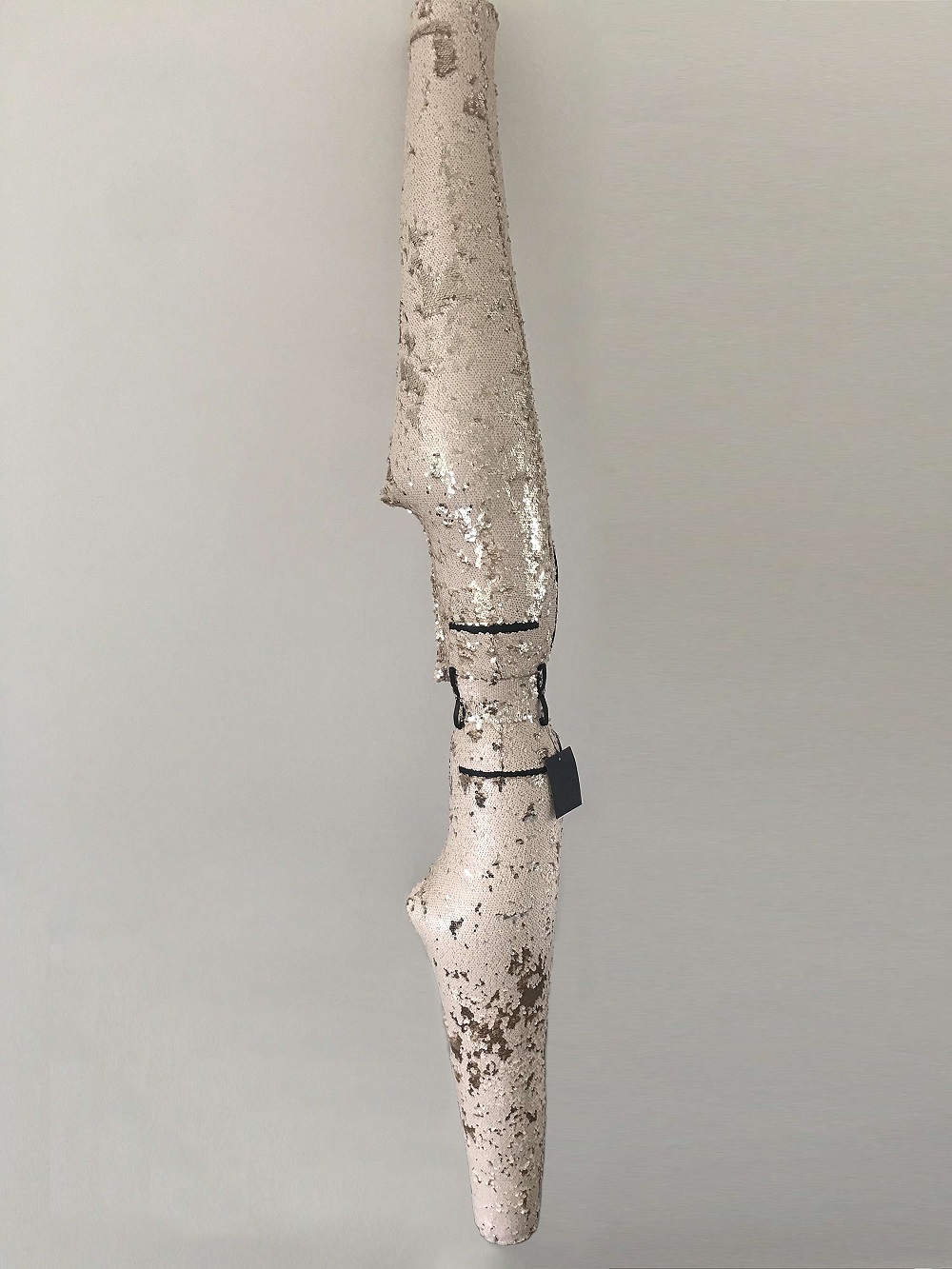 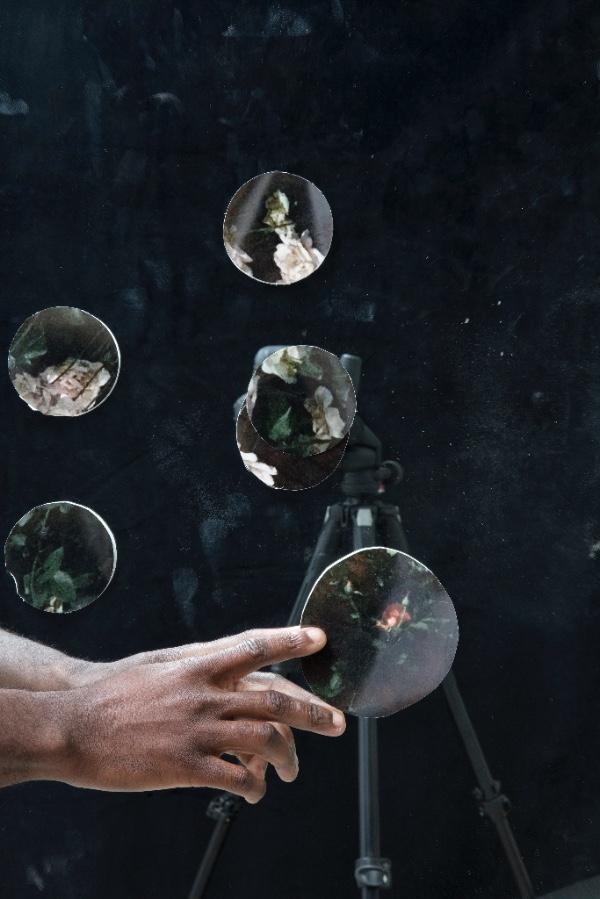 I think it is safe to add Paul Mpagi Sepuya to this list because maybe he is no longer a human artist, but an unstoppable force of nature. I honestly can’t remember the last time I have seen so much of one artist’s work being shown this much by different galleries in different fairs in one week in non-secondary-market contexts. I actually had to google him to double-check that the talented young photographer hadn’t recently died or something.

But it’s actually not hard to see why Sepuya is having this much of a moment. His sleek, idiosyncratic compositions—achieved by shooting subjects through mirrors in his studio—have an almost post-internet collage aesthetic. But they have so much more depth, in every sense of the word, than they betray at first glance. They present a sort of lovely visual rubik’s cube to the mind’s eye—as viewers, we actively have to make sense of the anatomical and spatial jumbles we’re faced with. It’s one of the few examples of a “whoa… trippy!” photography trick that doesn’t feel gimmicky.

And conceptually, Sepuya’s work lightly hits all the right notes for the art world’s ongoing obsession with identity politics. The disembodied balls of flesh in Sepuya’s work play with race and queerness in a way that’s simultaneously direct, sexy, engaging and surprisingly approachable. These are images that could function just as well as a perfume ad on a public billboard or as part of the critical discourse around identity in an academic setting. Hell, if I were a collector or dealer, I’d be snapping these up too. 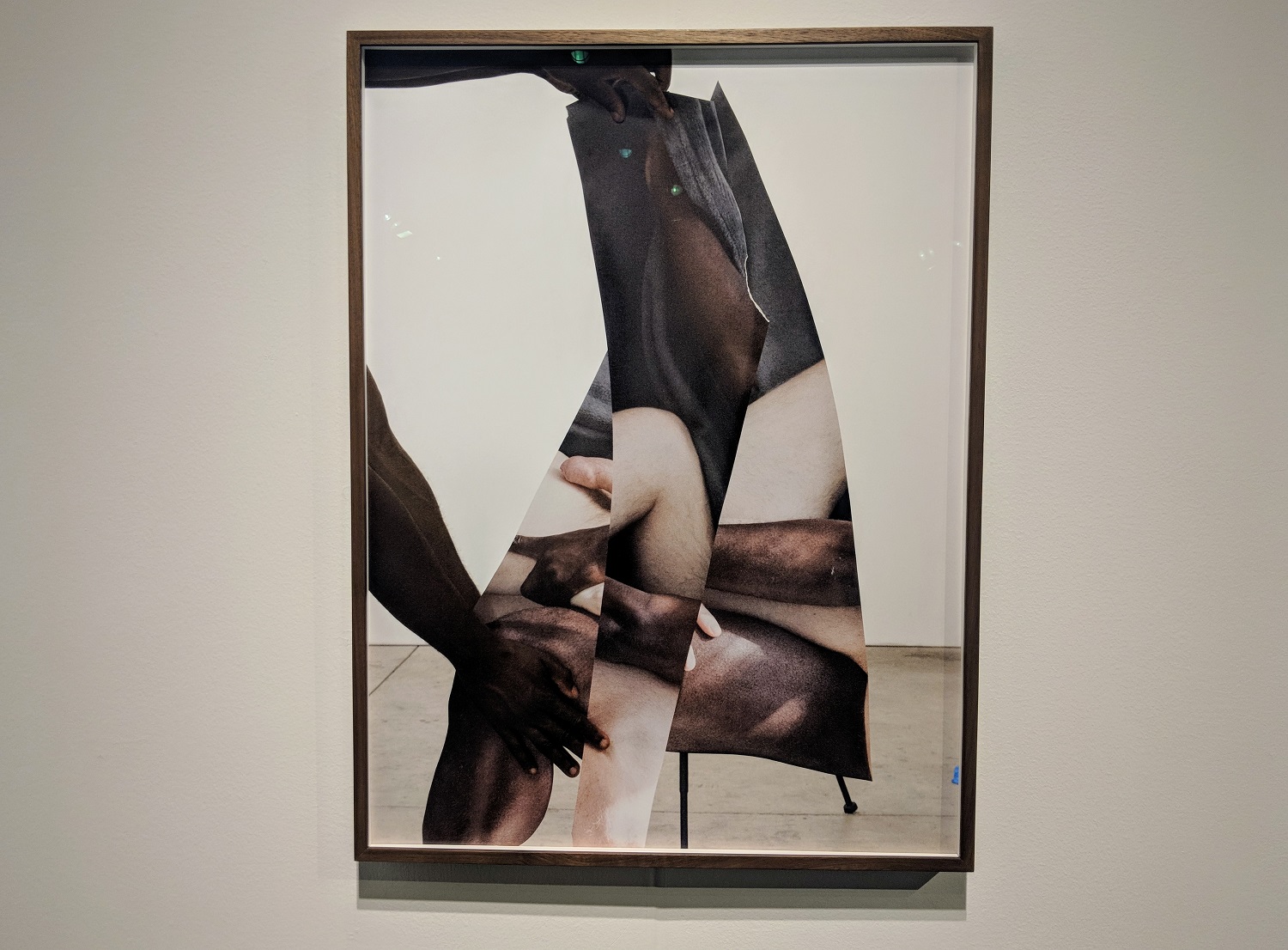 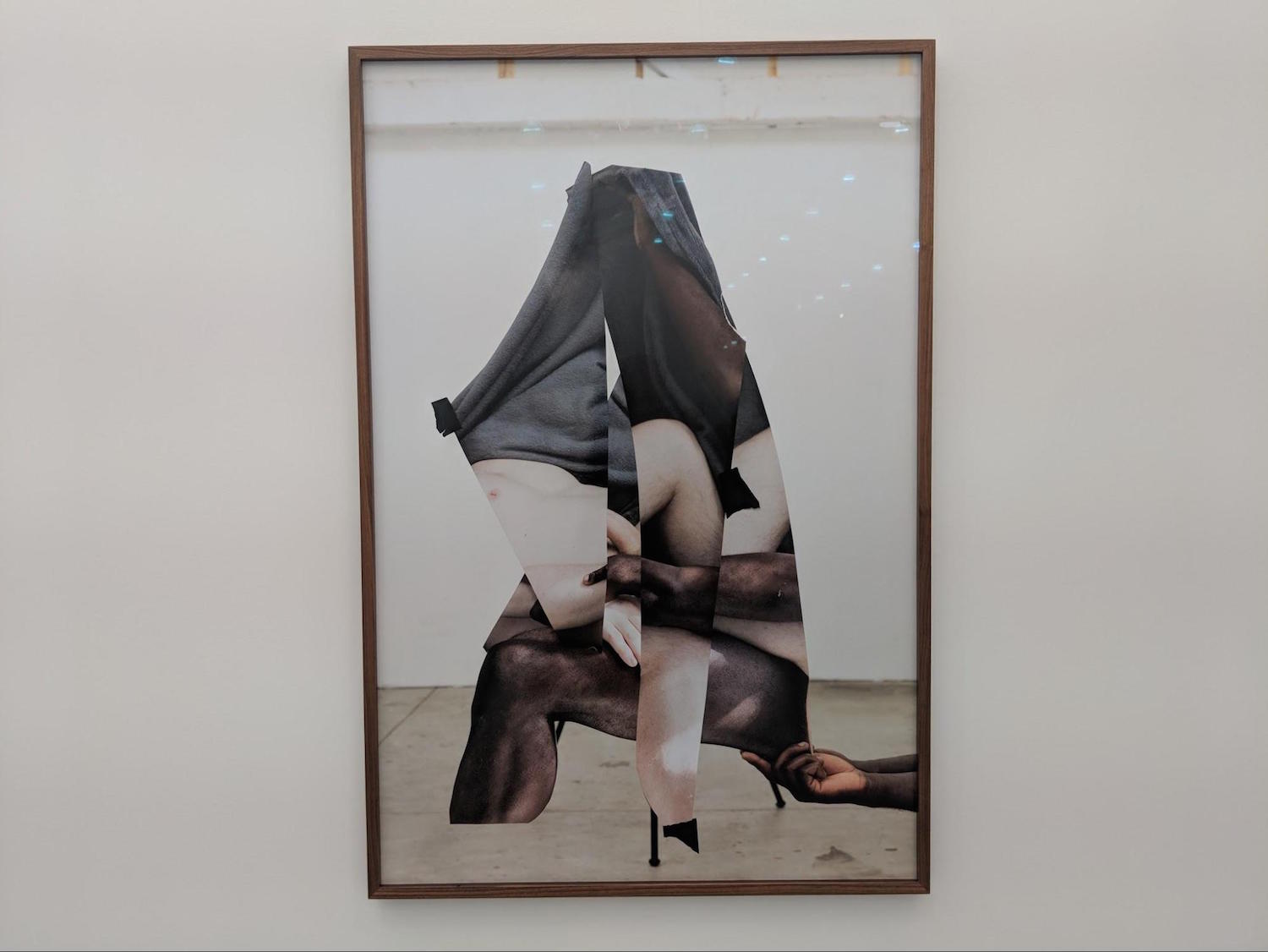 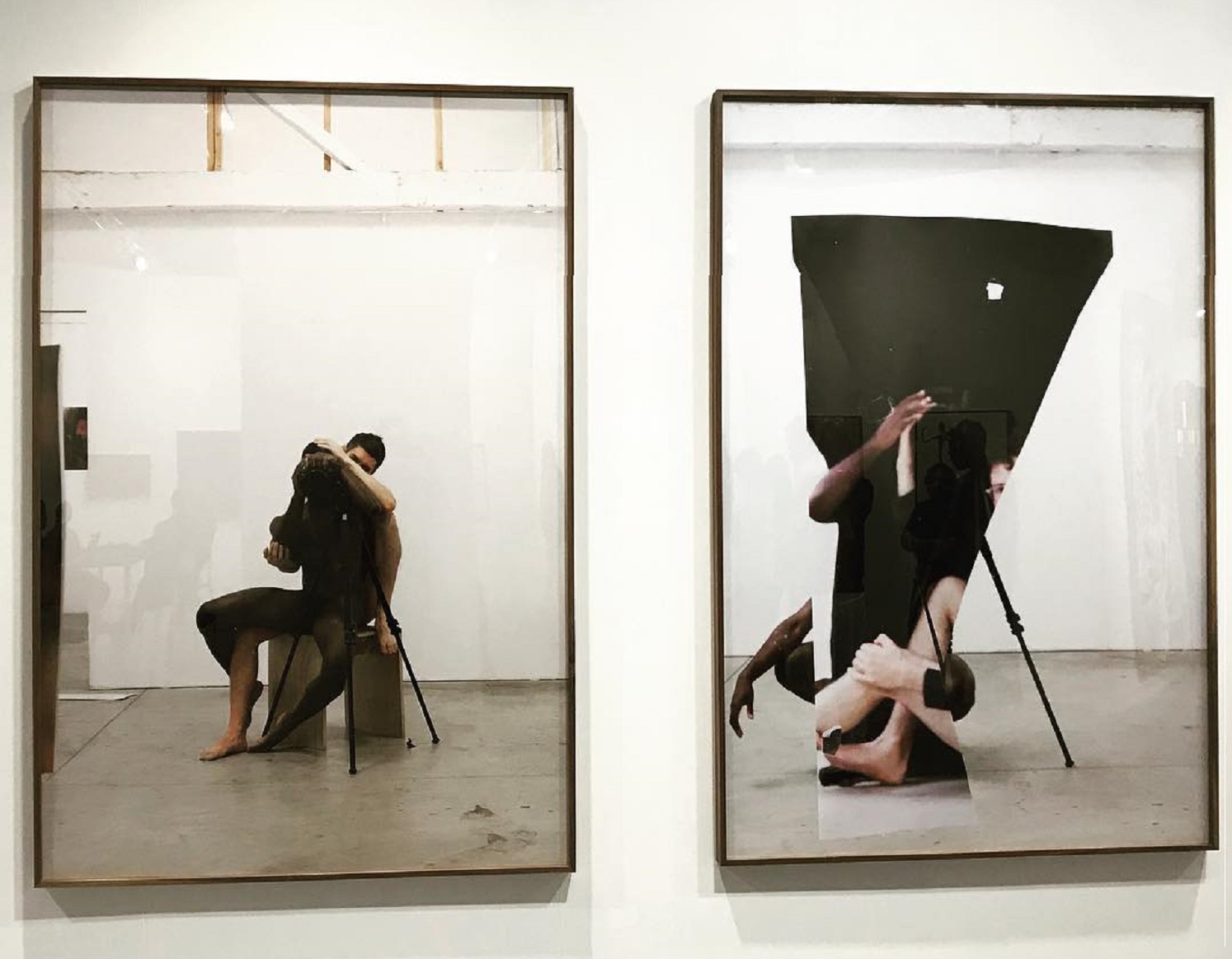 Feeling Like I Was Re-seeing Basically Everything I’ve Already Seen in Mexico City This Year. 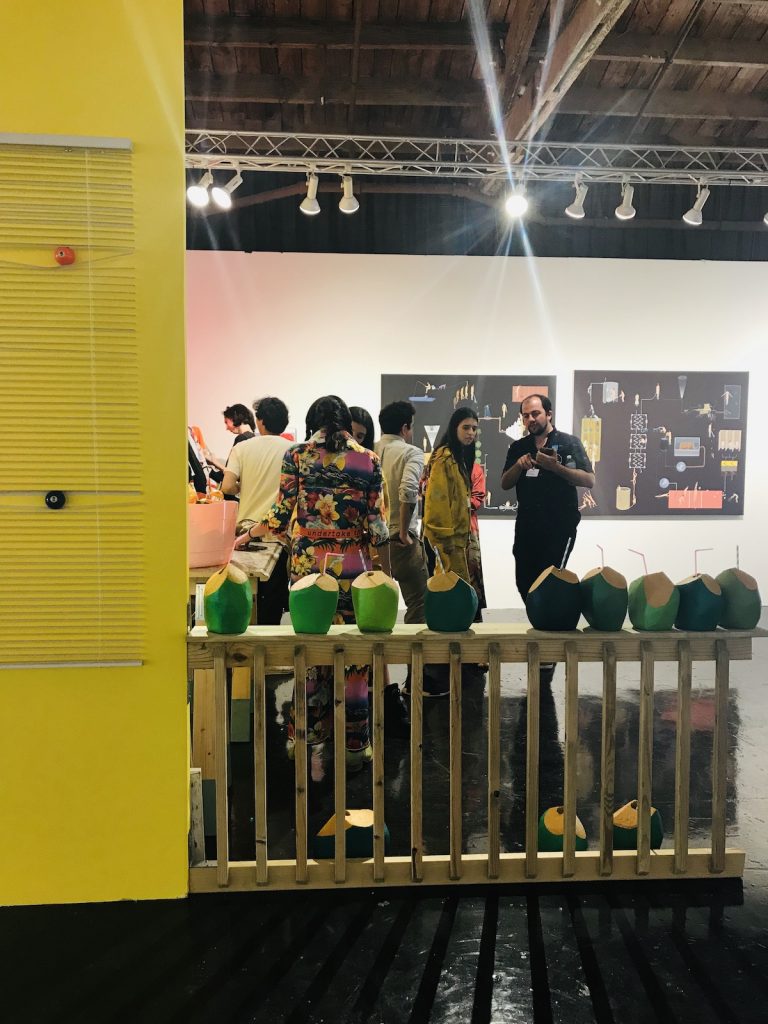 Mexico City has an ever more crowded, ever more cosmopolitan art calendar—from art fairs and their spin-offs in February to city-wide events like September’s Gallery Weekend Mexico or the international space-sharing program Condo. So to say that Mexico City was over-represented this year in Miami would be inaccurate. It is, after all, the biggest city in the hemisphere—it makes sense that Mexican galleries and artists should represent such a huge percentage of participants at the fairs. This year, Mexico City was everywhere in Miami—Juxtapoz Magazine and Mana Contemporary even hosted a pop-up exclusively of artists from CDMX. But I mostly find it remarkable how much Mexico has eclipsed basically all other global art capitals recently as the site where the primary market figures out its tastes/content.

Basically half of the notable art I saw in Miami this year felt like a scaled-down (or sometimes scaled-up) version of shows or projects that already happened months ago one time zone over.  That’s usually not a bad thing. It seems more and more artists, curators, and gallerists are taking more chances in Mexico (where everything from fabrication to fair booth/brick-and-mortar rental prices are lower) and using those experiences to refine or expand the ideas they’re presenting in pricier locales like Miami. It’s an exciting time for the Mexican capital and the unending stream of artists and their fans flocking t0-and-from there guarantees that it will continue to function as a major linchpin of the global culture flow.

I find myself wondering: do curators even remember that New York and Europe still exist? I feel like everyone just goes to Mexico City IRL or on Instagram to search for artists who tag their posts as #relevant and “at” LAX. Below, a very small sample of the things I was happy (or sometimes not-so-happy) to see rehashed in Miami after seeing in CDMX recently: 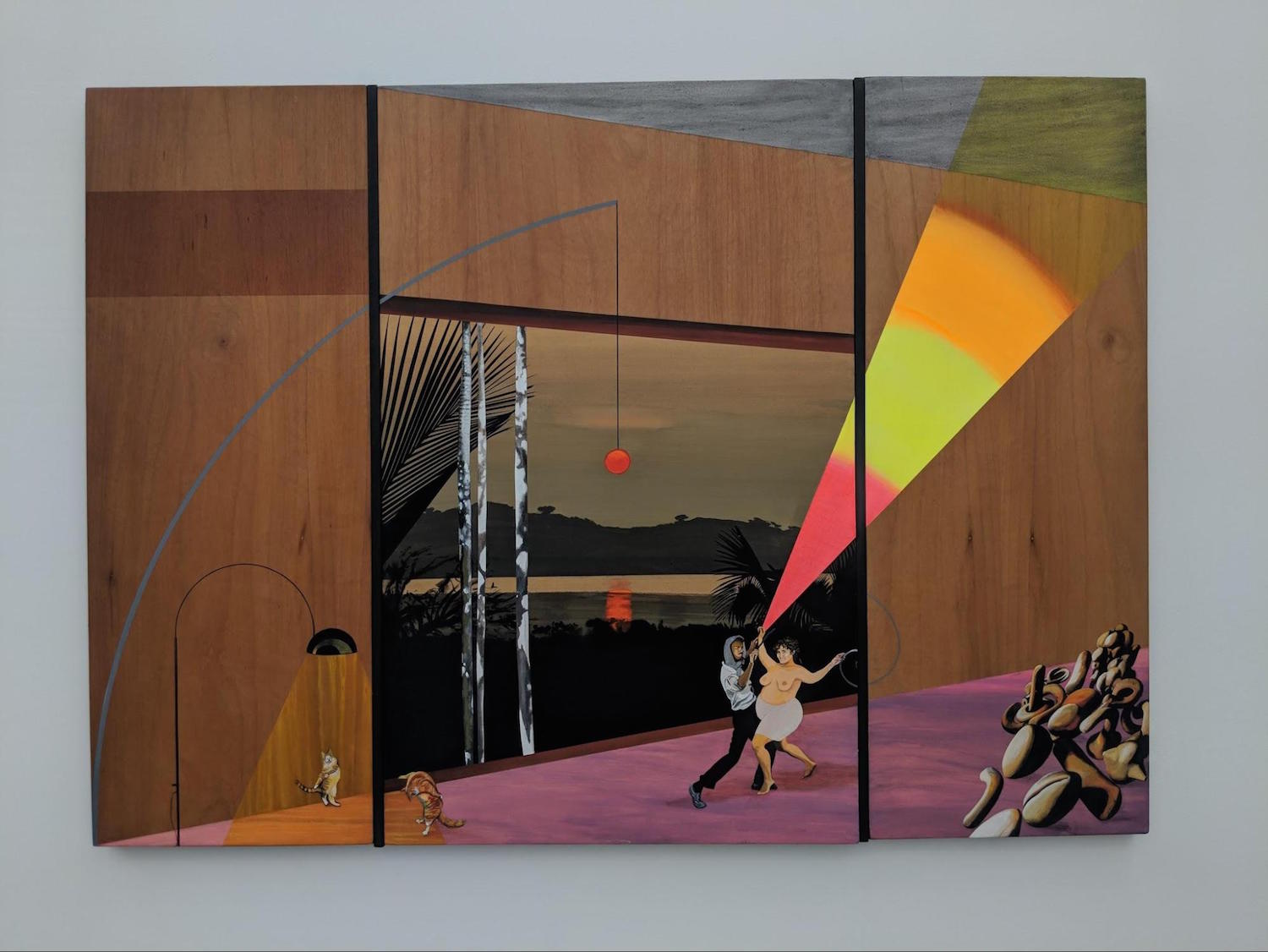 I totally fell in love with this Hulda Guzman painting when I first saw it at Mexico City’s Machete Gallery during Condo a few months ago. Machete was hosting Dominican gallery Sindicato, and now they’ve brought Guzman’s playful modernist interiors to Untitled themselves. Guzman’s work was also on view at the same fair at Greek gallery Dio Horia, as we mentioned in our post about Untitled. Yes to all of the above! There can never be enough of these paintings. 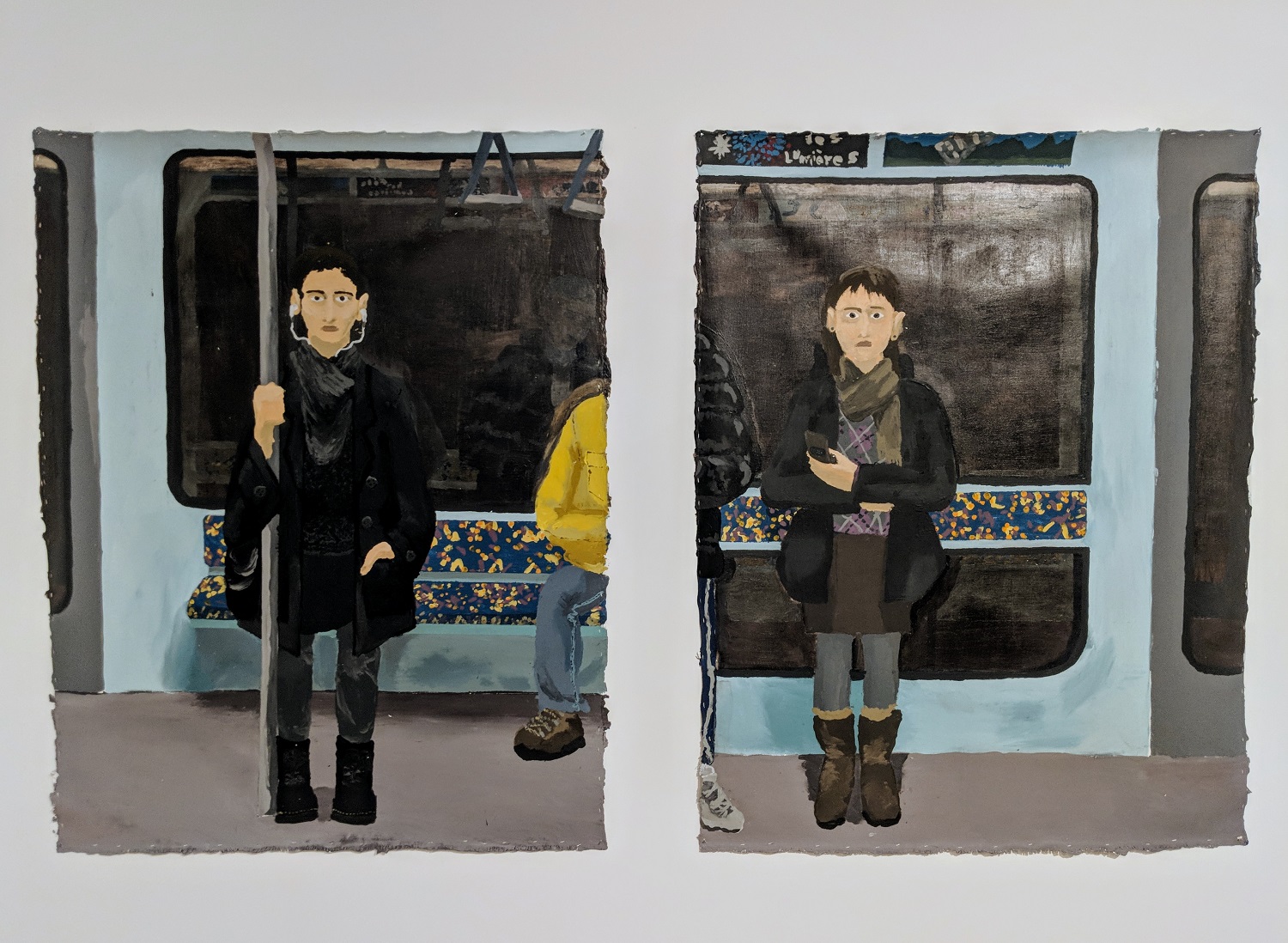 Mexico City’s Manuel Solano is deservedly having a big moment in the sun in a big way. The blind artist (!!!) has a small but beautiful show at the ICA Miami right now (pictured above, two paintings from that exposition) and showed four absolutely gorgeous works at Peres Projects’ Art Basel Miami Beach booth. Seeing Manuel’s work is consistently a special, life-affirming joy, so I always make an effort to catch their frequent shows in Mexico. Our studio visit/interview earlier this year remains one of my personal highlights of 2018.

Related: I also really enjoyed the gallery that formally represented Solano domestically, Karen Huber’s booth at Untitled (the gallery that represents Solano domestically). I’m kicking myself for not getting a photo of Ana Segovia’s small, charming paintings of pants. The young native Chilanga painter has been way ahead of this whole pants trend, as evidenced by this photo I took of her work in the Karen Huber booth she shared with Solano at Zona MACO earlier this year. 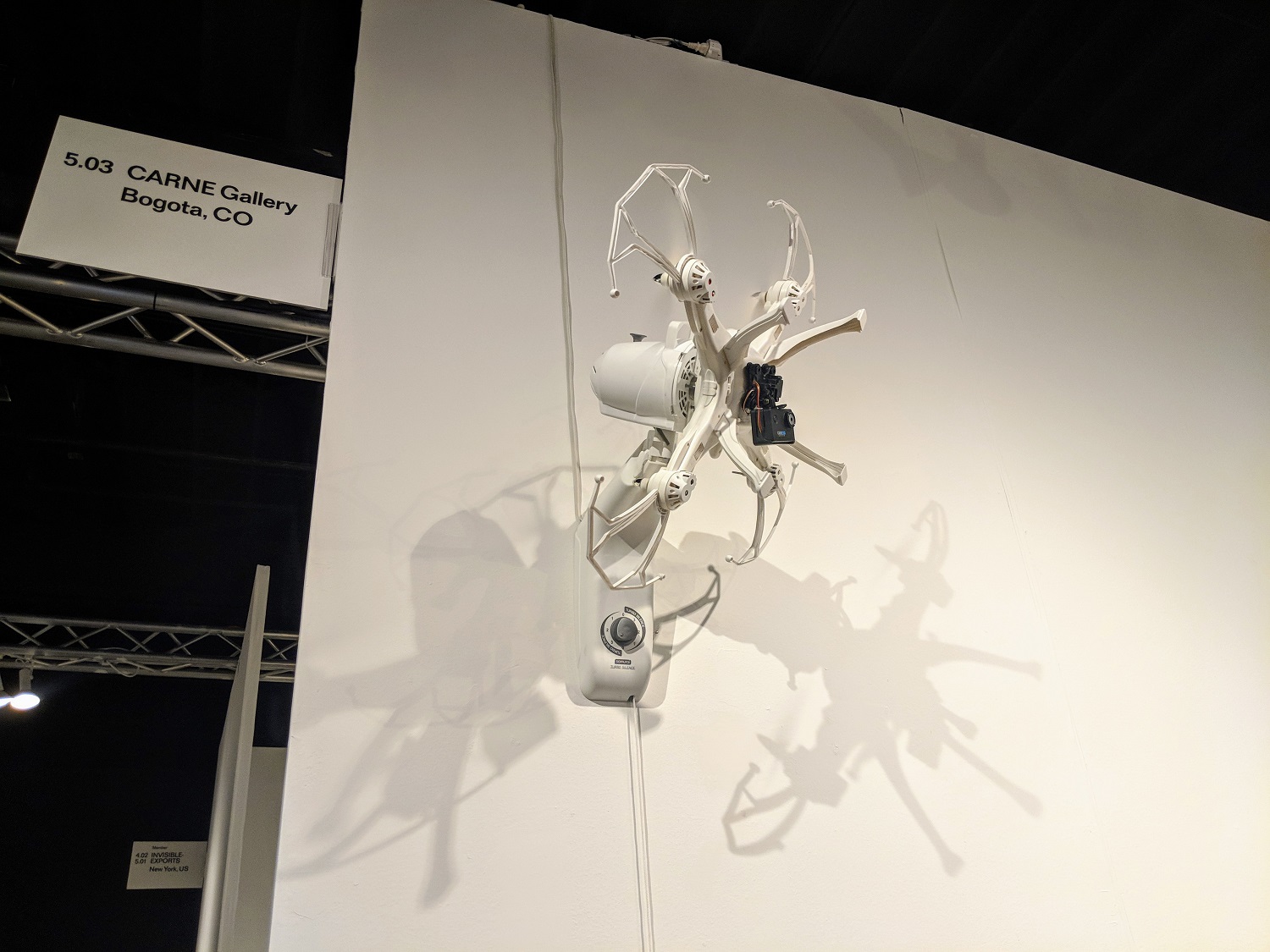 I first became acquainted with Colombian gallery CARNE through Mexico City’s excellent Material Art Fair. There, I dug their booth featuring branded police riot shields by Juan Sebastian Pelaez. This year at NADA, they continue their smart, political curatorial ethos with police batons by Daniel Jimenez (below). But another piece by Pelaez, pictured above, is what really stands out as one of NADA’s highlights.

The artist has transformed a surveillance drone into a wall-mounted fan (which in Miami is pretty practical!). It’s funny, and also speaks to a conceptual concern I’ve always appreciated from CARNE—chiefly, that sinister objects associated with power and control can be almost all-too-logically subsumed into the banal blandscape of consumer culture. It’s a smart, unsettling way of acknowledging the unspoken complicity between late capitalism and state violence. 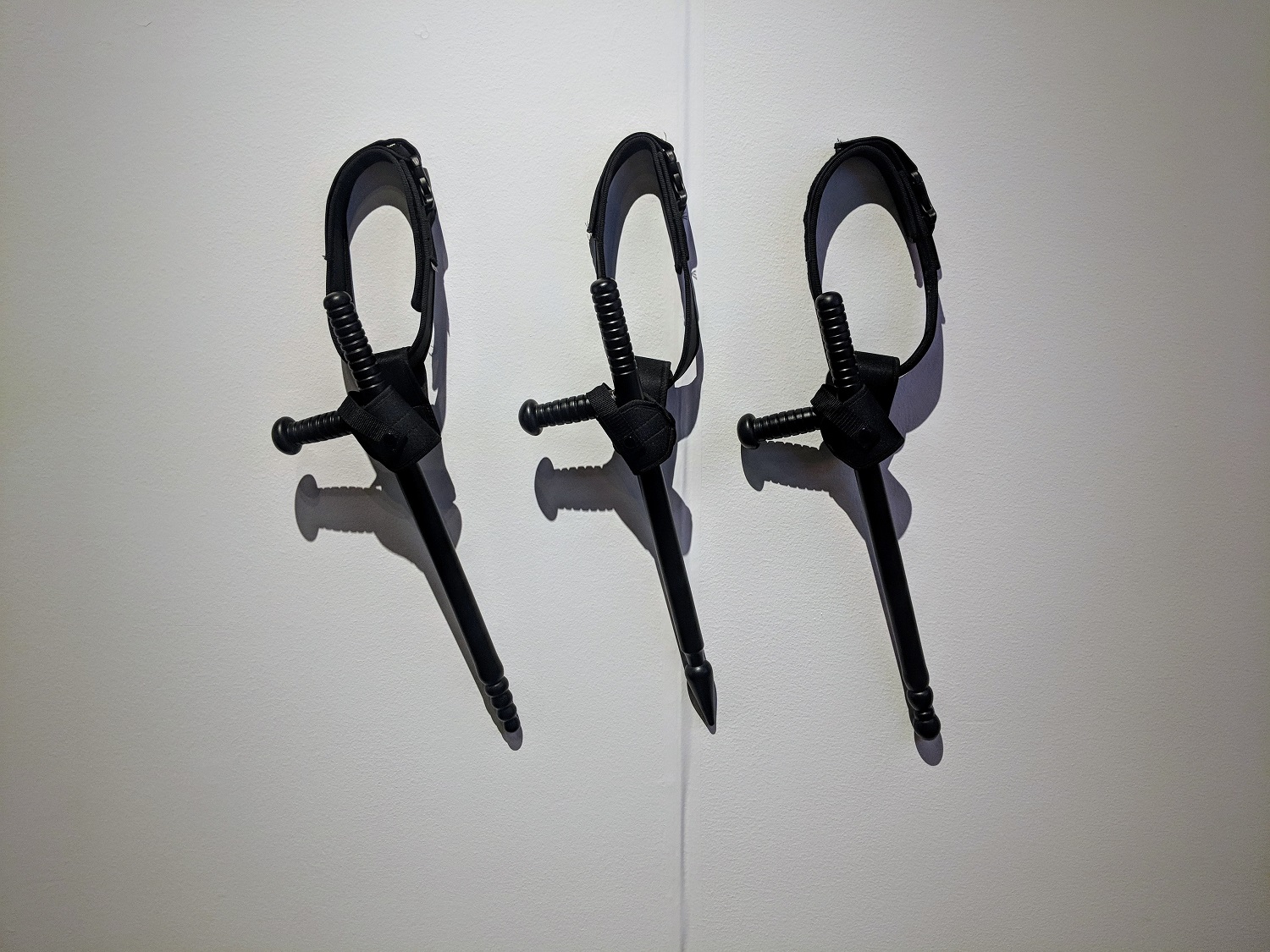 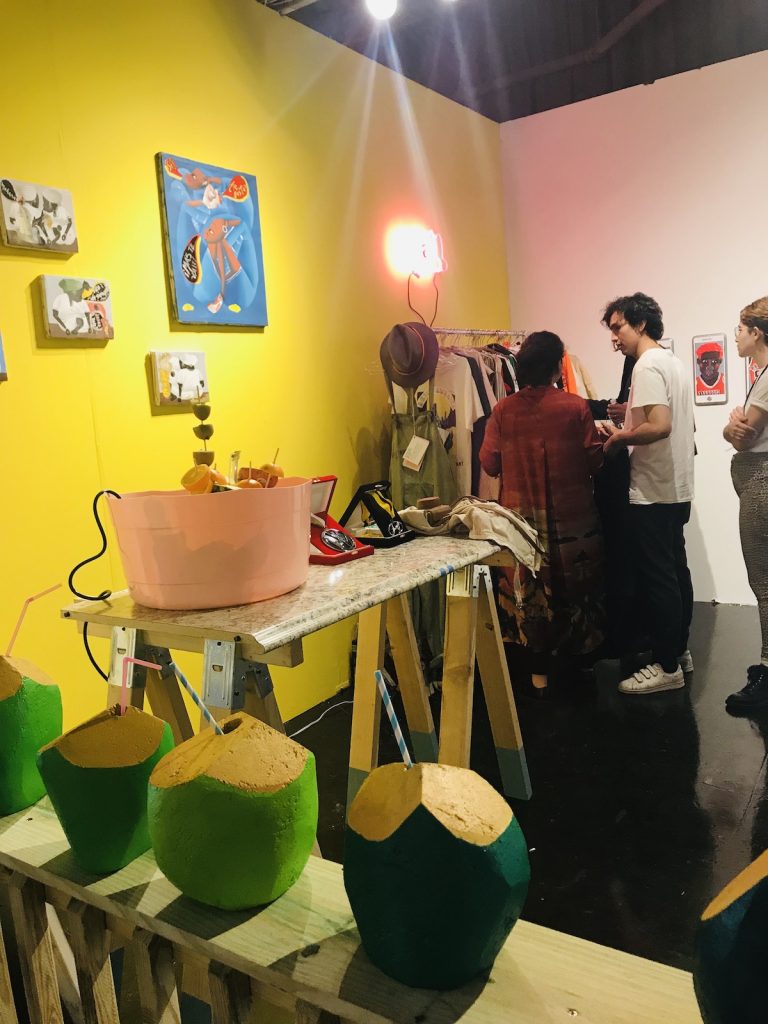 Photos of Proyectos Ultavioleta’s booth at NADA (click here for their Instagram) do not do it justice. I’ve come to know and love the Guatemalan gallery from their annual participation in Mexico City art events, and I unequivocally fawned over most of the work in their NADA presentation this year.

But I found myself again uncertain of a project from Puerto Rican artist Radamés Juni Figueroa. Both here and in Anonymous Gallery in Mexico City last year, Figueroa opened pop-up bars as artworks that supposedly paid tribute to Puerto Rico’s vernacular nightlife and its potential to bring people together. The problem is, to my mind, that they aren’t as “vernacular” or “accessible” as the press releases have claimed. In both instances, I found myself wondering how this is “art” and not just “a bar” that’s justified as an artwork by appropriating “exotic” popular aesthetics?… like, alcohol is a given at art openings and art fairs… and it’s usually free!

I don’t really see how charging $11 for a cocktail is a “democratic” gesture? I like a lot of Figueroa’s object-based art, but his bar installations leave a bad taste in my mouth, moreso than if they hadn’t been framed as these magnanimous endeavors that seem to appropriate working-class dive bar aesthetics for an art-viewing audience with disposable income. (And at NADA, there really wasn’t that much of an aesthetic intervention in the space! Just a shelf with some painted coconuts!)

Maybe there’s a message here about cultural labor being undervalued outside of object-based practices unless explicitly situated in the world of nightlife? Last year, I did, in the end, have fun at his Mexico City project, despite my reservations (and the fact that it was at a price point most of my Mexican peers viewed as outrageous and geared to foreign art tourists). But somehow, it seems disingenuous to position the act of selling booze as some sort of expression of cultural generosity of spirit. Most of us just spent a week drinking glasses of $100+/bottle champagne for free in exchange for looking at art objects. Paying for rail liquor in exchange for being told it is the art object seemed kinda anticlimactic? 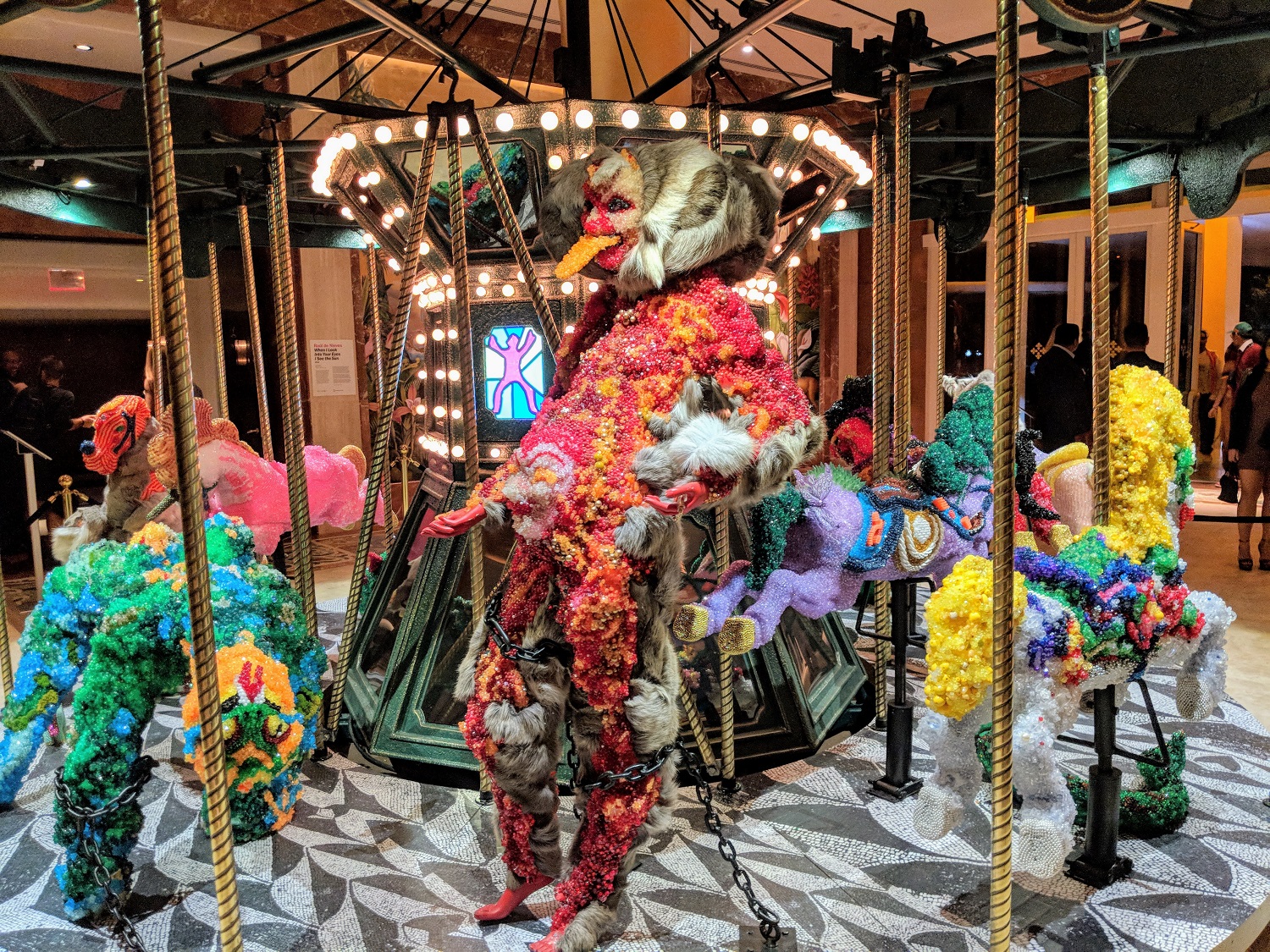 Ok, maybe it’s not accurate to include Raúl de Nieves on this list because the Mexican-American artist isn’t a Chilango and lives and works in New York and is literally EVERYWHERE these days (hell, I even had the immense privilege of interviewing them in Baltimore last year)  but I wanted some excuse to mention their gorgeous, fully-functioning carousel installation at Faena House (presented by Art Production Fund). Anyway, this is like an even higher-production-value iteration (that brings out all the joy and otherworldly magick and obsessive craftiness) of  their vaguely theatrical installation at COMPANY’s Zona MACO booth earlier this year jn CDMX.

Seeing Raúl’s work is always a bit like getting a really good, long hug from someone that makes you feel a lot better about yourself and the world but also makes you suddenly remember “holy shit, am I super high and just forgot I did drugs? What is the true nature of this reality and why aren’t I fully participating in making it better right now? HORSES ARE SO BEAUTIFUL.” 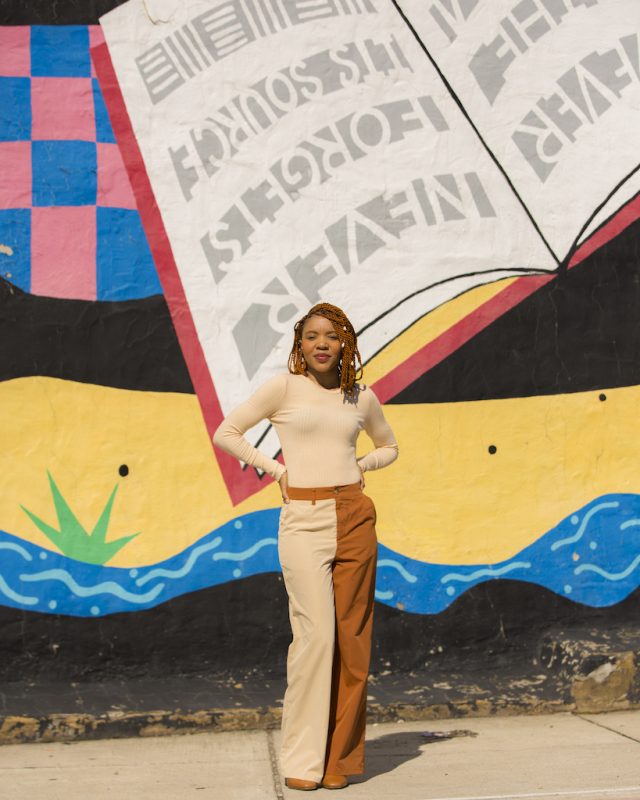 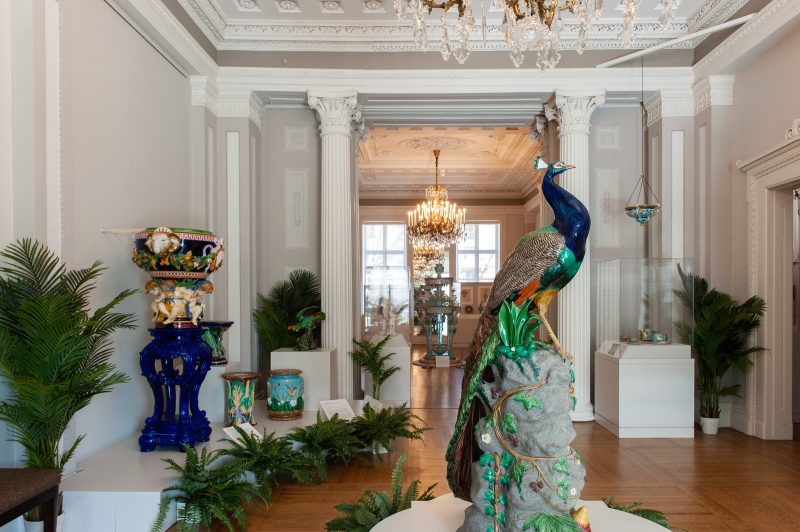 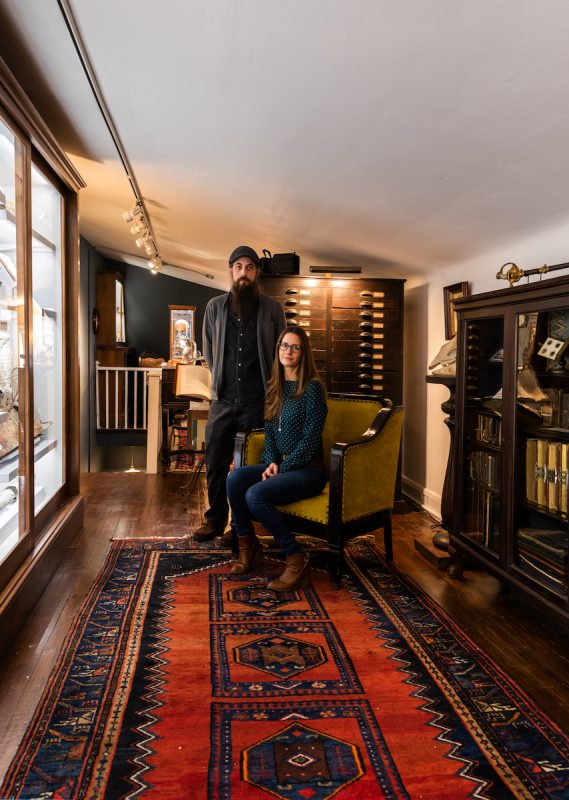