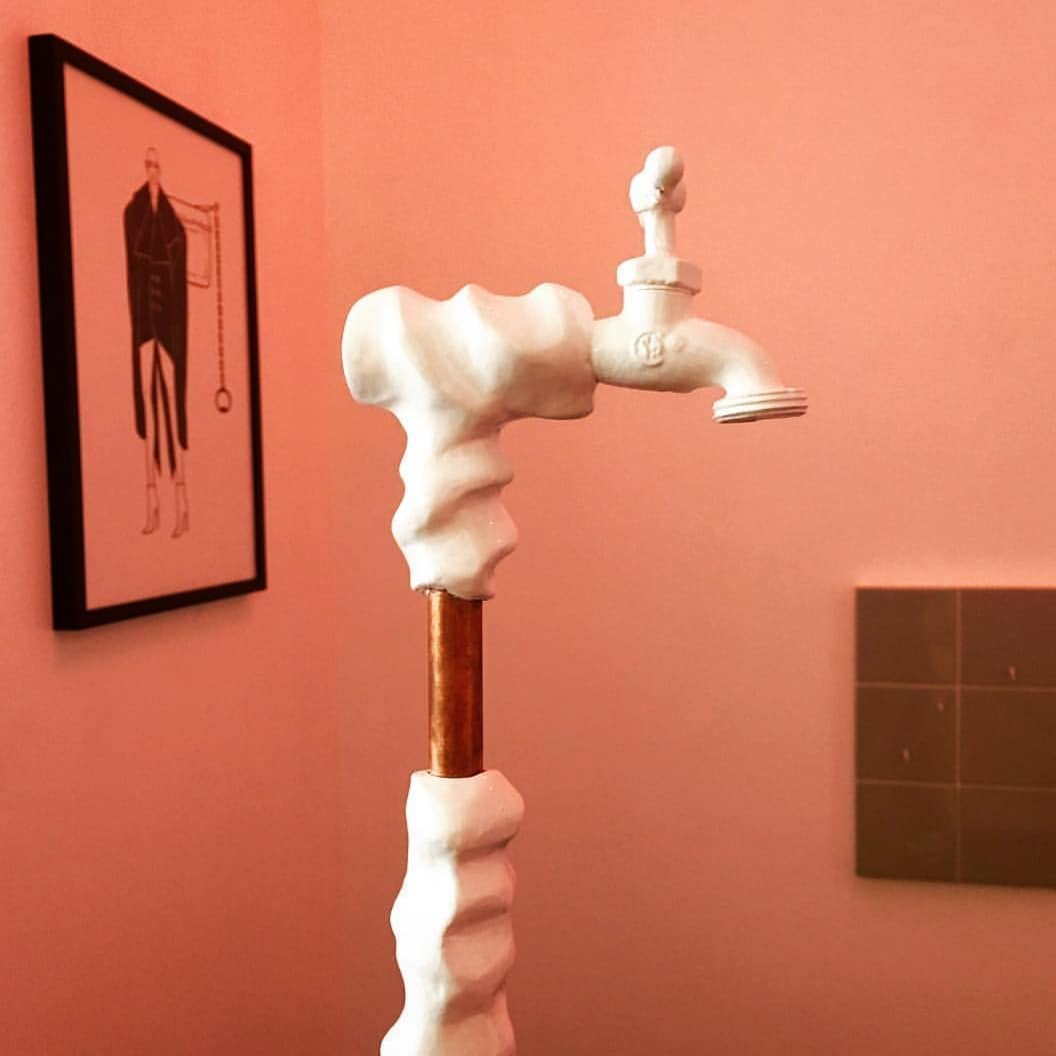 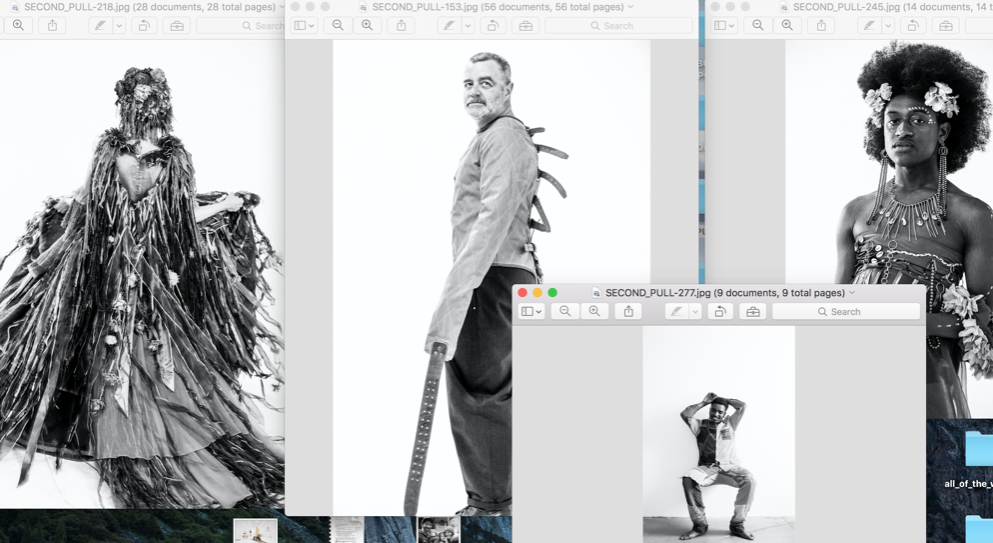 Wesley T. Brown isn’t interested in doing anything the easy way. The 28-year-old current resident at Baltimore Clayworks used to work toward creating obsessively uniform pottery. When he perfected that, he started making the largest vessels he could. When that got old, he started mixing chicken grit into the clay to give it a rough and unpredictable texture. That process cut up his hands, but he was hooked on this way of working: setting up a series of challenges within the making process and seeing what results from the fight with his materials.

For his current series of large ceramic sculptures, Monuments, he uses the “clay quilting” technique he invented while in grad school at Indiana University. He wedges all of the clay to make it more malleable, then throws it in “massive chunks” across the floor so it stretches and starts to pull itself apart. He then throws these pieces down onto a canvas support which he wraps around a structure to make his 200-pound sculptures. The resulting works are scarred, lumpy, and somewhat awkward, revealing every aspect of the skirmish and trauma of their making.

While we were chatting about his work, Brown quoted a mentor, the late abstract ceramicist Peter Voulkos, who when asked about the large scale of his work said, “I don’t want to be able to get my mind around it, because if I can get my mind around it, it becomes contrived.” Brown feels the same way, his eyes lighting up when he mentions the physical struggle of making a piece. Brown hopes that his resulting work feels like a “spontaneous moment that isn’t manicured,” a reminder of the beauty in the everyday as opposed to the pursuit of the perfect.

This fall, Brown’s work will be included in the prestigious Korean International Ceramics Biennale. 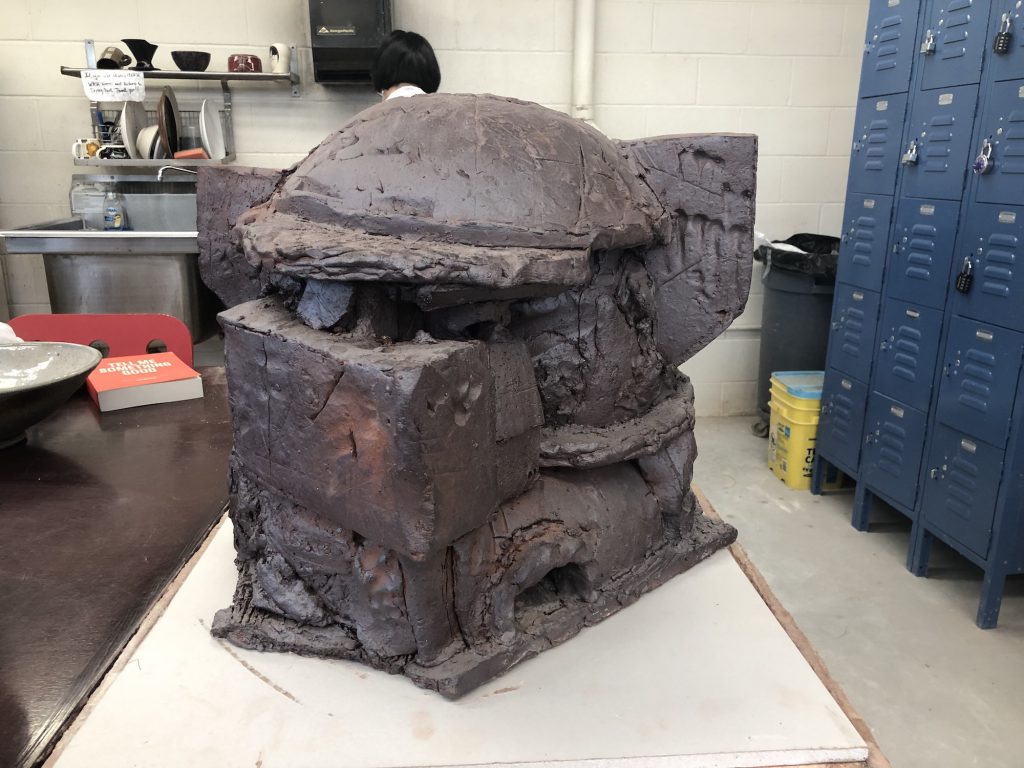 Wesley T. Brown: Garth Clark and Mark Del Vecchio’s collection Shifting Paradigms in Contemporary Ceramics. It is a ceramics book that outlines major ceramic artists and the different movements in the field throughout the years. Up until that point I did not know much about the field and flipping through the book’s impressive images and writings helped me give me a grounding I did not have.

People would tell me when I was starting out to do art shows and craft fairs making souvenir pieces. I knew that wasn’t my scene but in the beginning so many people talked about how much money I could make. I never followed that because I knew that is not where I wanted to be and I couldn’t see it leading anywhere.

Best advice I have ever received is from Tim Mather with a quote he said often, “worst way to find an artistic style is to go looking for one.”

Matt Wedel. The guy is a machine in his production of work. I’ve met him and seen him demo and talk several times over the years. I know he has his own massive kiln and teaches at the collegiate level. I admire that he has worked to the point where he has the space, the tools, and the infrastructure to make his large ceramic sculptures and make a living.

What was the last thing you bought for someone else?

I bought yogurt for my wife. I stayed at work late and was on the way home to buy a few things for the following day at 1am. I felt selfish buying apples and bread so I bought my wife’s favorite yogurt and left a note on it for when she was to wake up at 3am to get ready for work. She is a barista for a coffee shop where she has opening duties.

At the moment no, I don’t have a lot of free time. I’ve been into bladesmithing on the side, I like the utilitarian aspect of it. I also watch a tremendous amount of YouTube. I watch a lot of process videos. Woodworking and process videos of timber framing. A lot of psychology and philosophy videos, professor Jordan Peterson, occasionally Joe Rogan.

I’m always listening to music in the studio, almost every type, Bach, Paganini. Lately I’ve been on a jazz kick, Charles Mingus. My favorite hip-hop albums of all time are Kendrick Lamar’s Section 80 and Good Kid, M.A.A.D. City because of the narrative. Singer-songwriter Ben Howard and the Australian singer Tasha Sultana. FKJ, French Kiwi Juice, does a lot of collaborations and sound mixing and looping which I relate to my work. 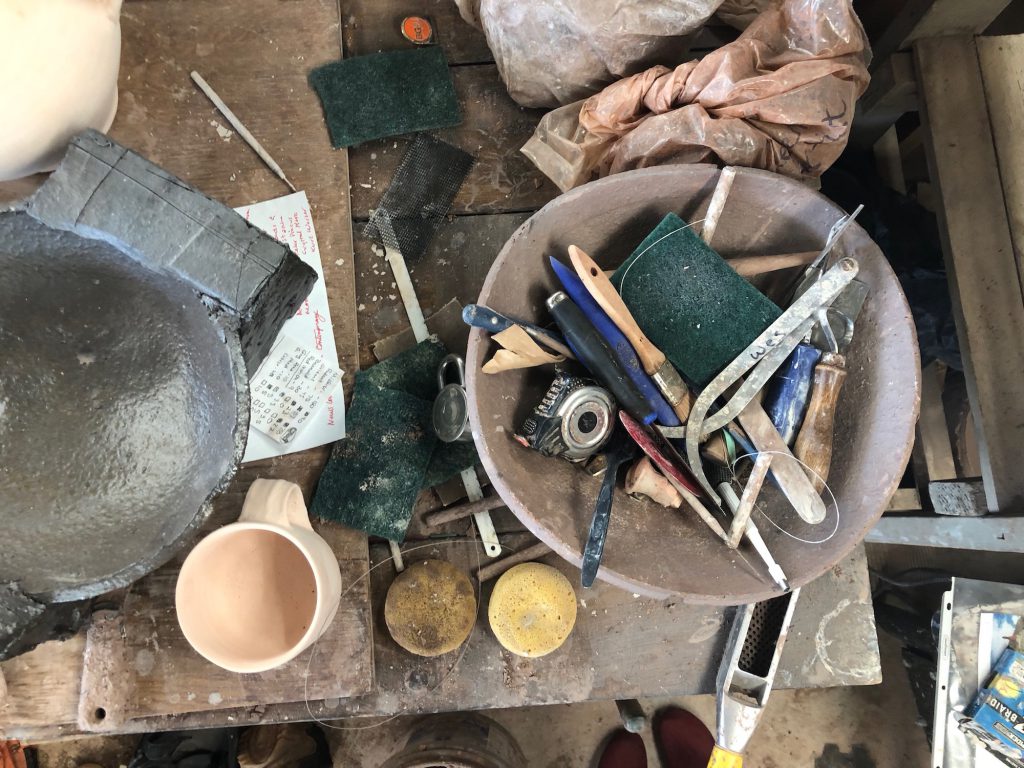 Anything Don Reitz. He was a very expressive potter and sculptor with a long history of wood firing. Even though he didn’t always woodfire he, as wood-fire ceramicists, had a tremendous understanding of form. And his work moves effortlessly between sculpture and vessel.

If someone made a voodoo doll of you, what is the outfit you’d most likely be wearing?

A tee shirt, canvas work pants and some old looking shoes. Probably need to drop it in a pile of clay so it wouldn’t be so clean.

I would make a series of monolithic outdoor metal sculptures. I would be working based off architectural references like triumphal arches, obelisks, and large double doors/gates. All the works would be made in clay, cast in iron, and they would have to be black. Think Rodin’s Gates of Hell but without the people.

Wake up around 9. Devotional time. Breakfast. Commute to one of my teaching jobs. Teach for a few hours. Stay after preparing stuff for the following day, data entry. Answer emails. Eat. Go either home or the studio to work ’til 9 p.m. Pick up my wife, Unity, eat dinner, spend time together before going to bed around 11 or 12. 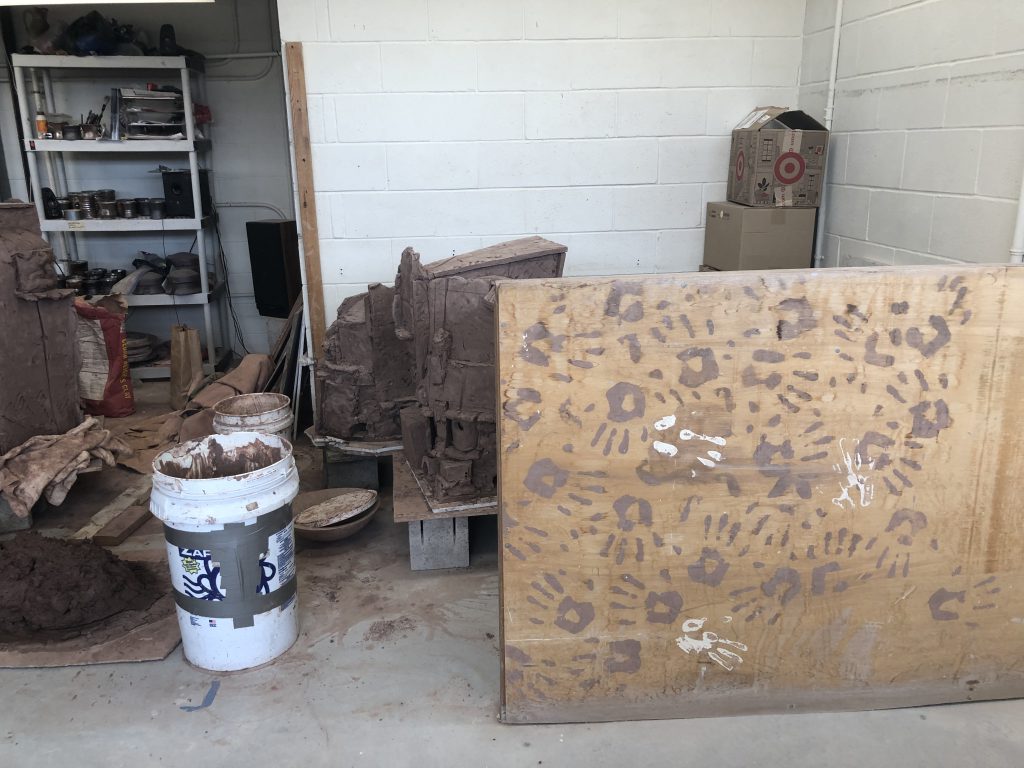 I would say at this moment my most memorable assignment in school was from community college when I had to make an anatomically correct animal sculpture. I made a rhino, it was of a decent size, and it turned out better than I hoped. It was a real head-turner. My teacher said it had the “wow” factor.

Hold up, do any photos exist of this rhino?

There were at a time but since switching computers I cannot locate them.

What are three words you hate that people use to describe your work?

I strongly dislike when people who make functional wares in ceramics talk about “rituals” and their work being “ritualistic” in its everyday use. “Routine” and “ritual” are not interchangeable words. I speak against the use of such language as someone who once used ritual as a way to describe my own work. I used it because I was self conscious and uncertain of how to talk about pots in an academic setting; I had an inferiority complex about my pots. I tried to raise my everyday pots to the level of those artifacts in museums.

A routine is what we do everyday, drinking morning coffee, driving to work, brushing teeth. A ritual is a choreographed and sacred ceremony tied to a transcendent experience. A ritual can be done regularly. But the terms routine and ritual are not interchangeable.

Getting coffee with a friend from a handmade mug can be life-changing, soul-filling, or cleansing but unless the two of you are both acting as performers in a choreographed ceremony seeking higher existence, then you just had coffee and a good conversation.

Neither routine nor ritual are inherently better. I don’t like when people say something about a routine task/art piece that is routine. It makes light of something truly special.

I imagine I would be quite scared and super overwhelmed. I was a very anxious kid. So if I told myself I would be living on the east coast, an artist, preparing to show work internationally, and married, I would simply be overwhelmed and shut down. 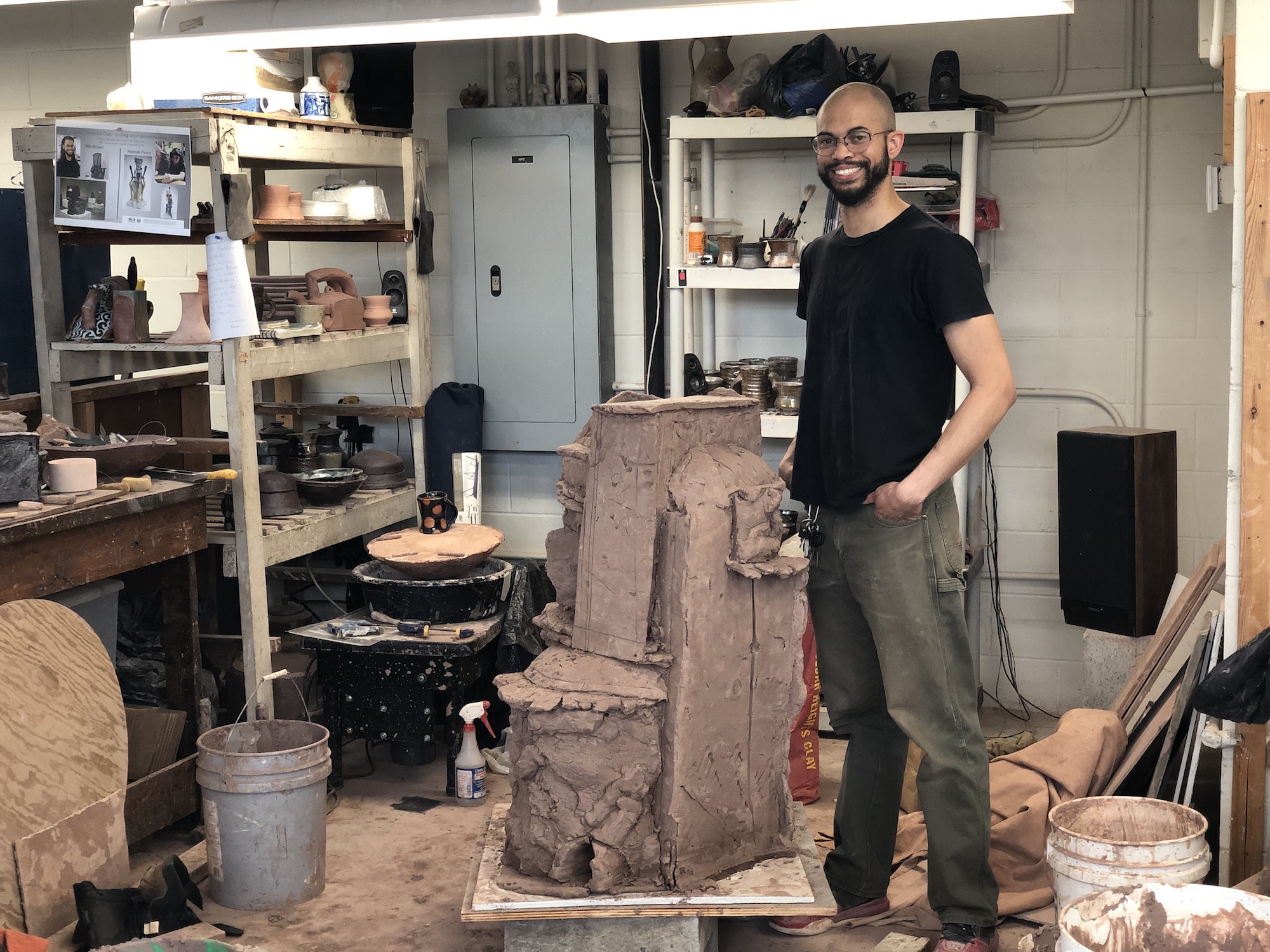