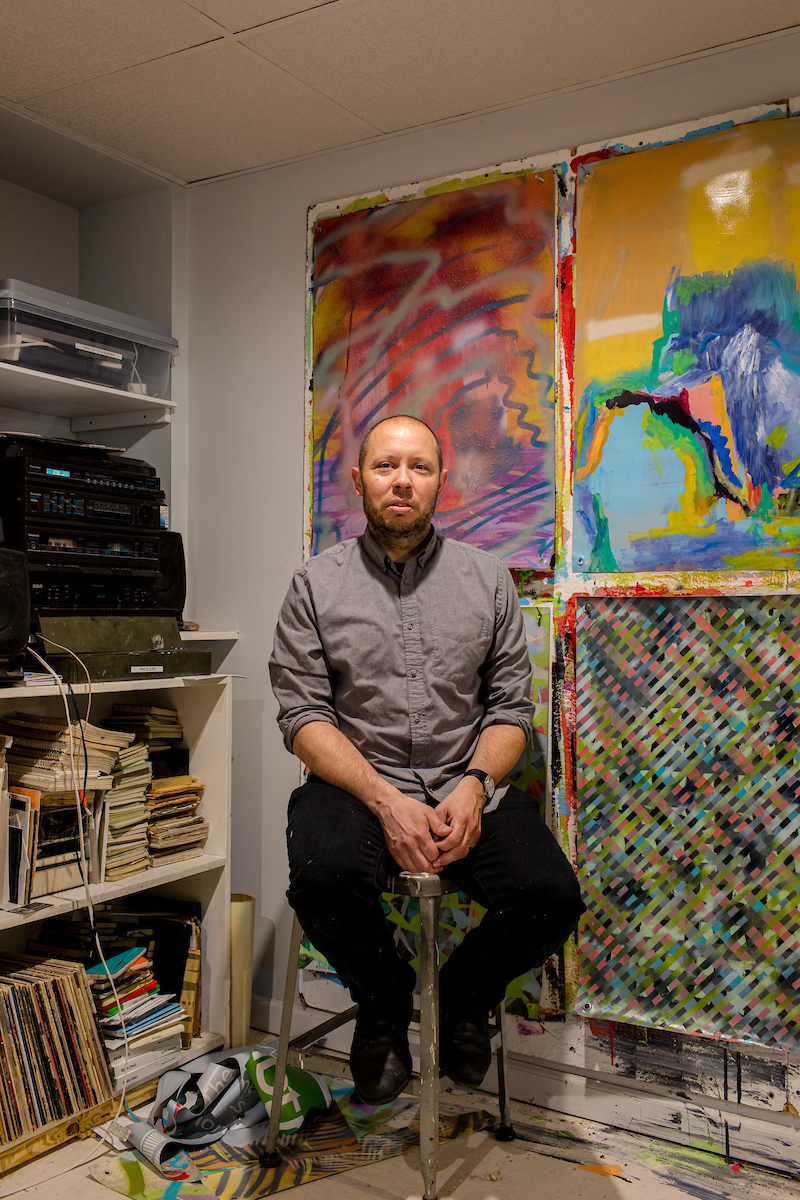 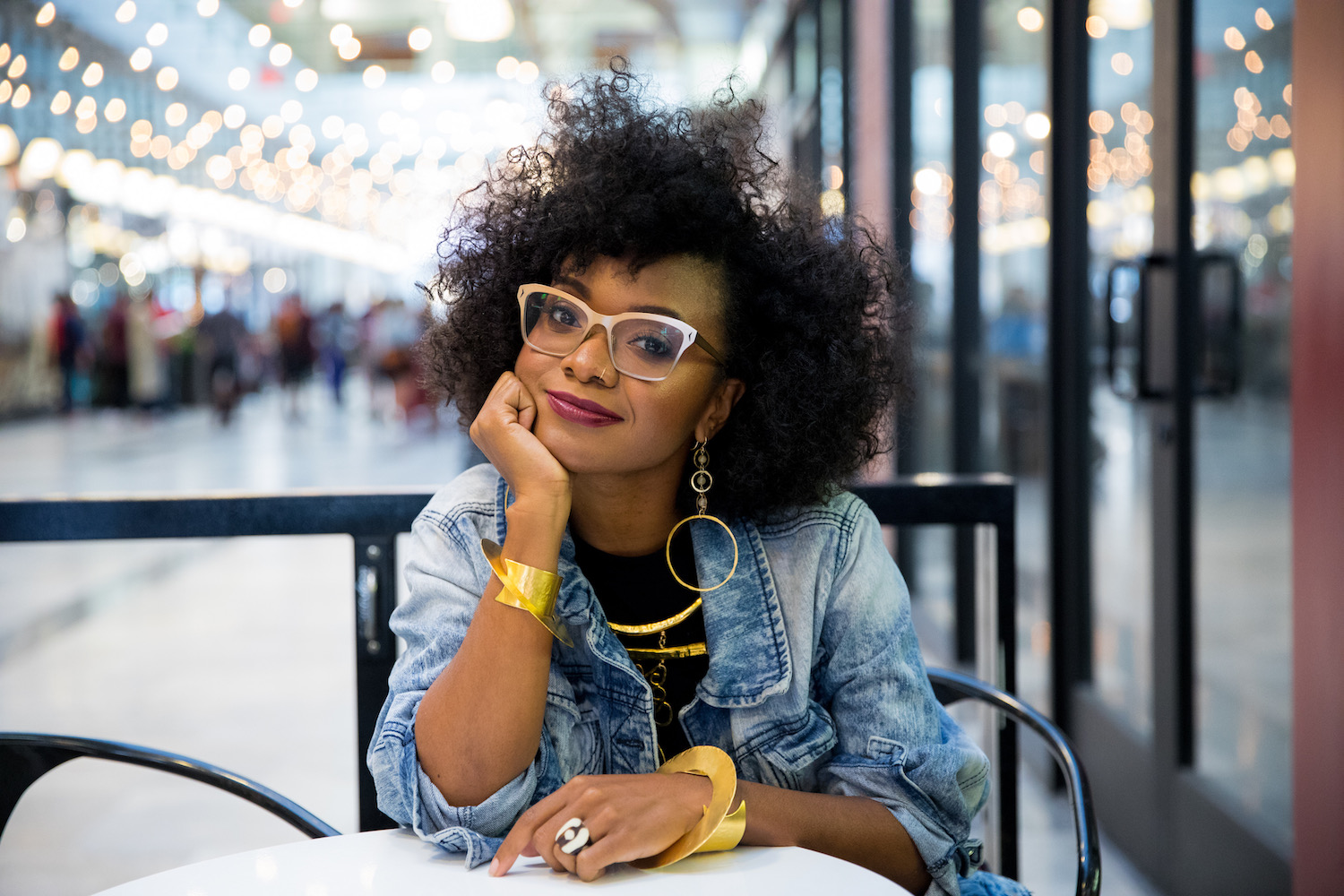 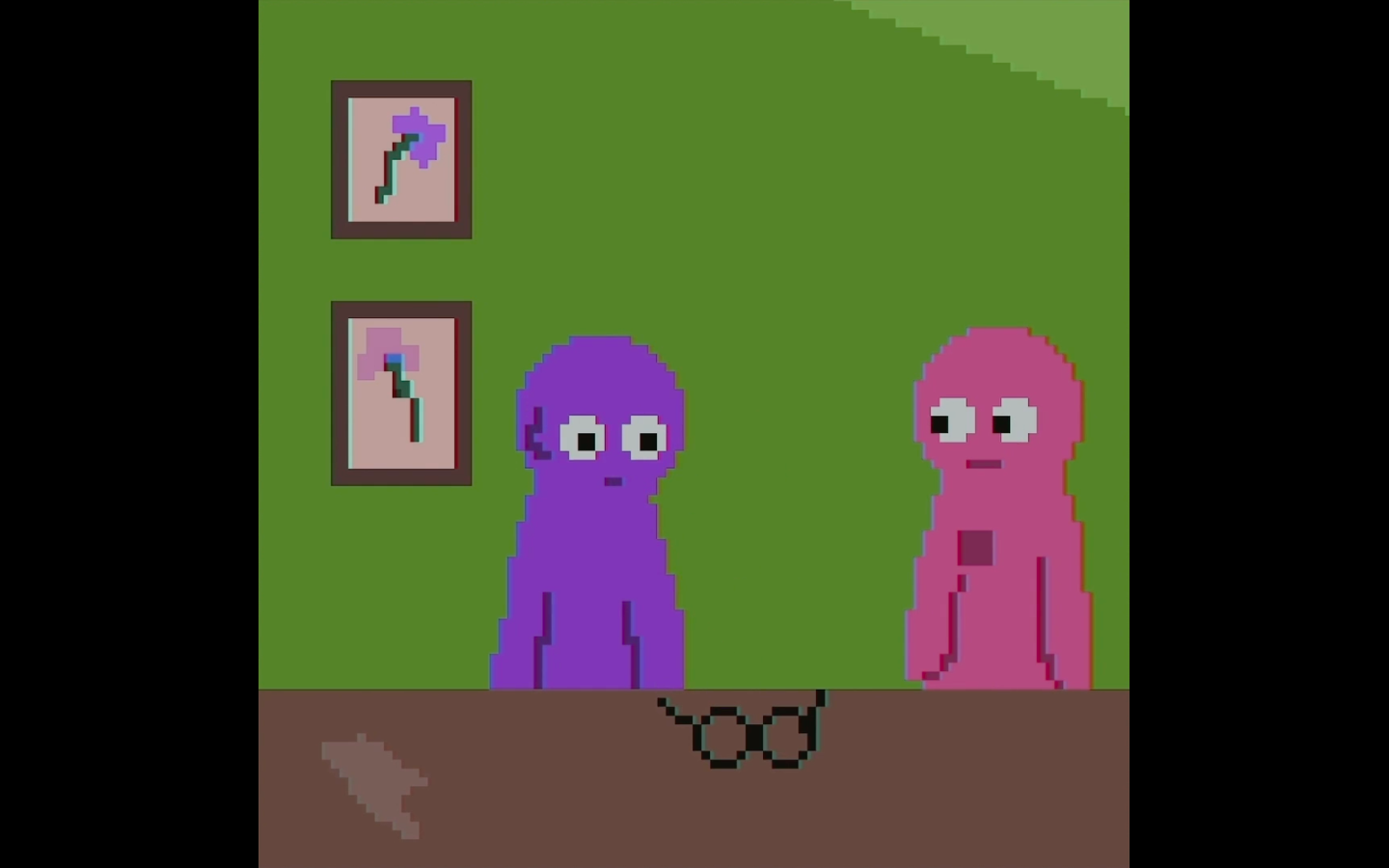 Two very kyooooot homunculi—one pink, the other purple—sit on a beach and contemplate, in Russian, the infinite by way of the sand surrounding them. Millions and millions of grains rendered, like most of Baltimore-based director/writer/animator Albert Birney’s Tux and Fanny, as a big-pixel ’80s video game and rudimentarily animated, recalling the leisurely rhythms of a cut scene from, say, Adventures of Lolo.

“That’s a lot of us,” says Fanny, the purple one, with a high-pitched voice and a wonder-filled, generally less lugubrious look on life. “If we do exist out there, I hope we have sunsets.”

Saddled with a devastating kind of stoicism—like Mr. Bill or the donkey in Au Hasard Balthazar—Tux and Fanny deliver a silly sort of insight (their dialogue is somewhere between a koan and a really solid, sweet tweet) via short vignettes, shifting between the regular and spectacular.

Tux and Fanny arrived piece-by-piece beginning in June of 2018 when Birney began posting one-minute-long, eight bit-looking animations to Instagram (his previous feature, Sylvio, began as a Vine series) starring these two characters. It was a riffy, retro series of gags and occasionally anti-punchline shorts that, before you knew it, unspooled an unfettered narrative that occasionally incorporated claymation, live action, CGI, clip art, abstract sculpture, and more, and floated a few lofty ideas. This year, Birney stitched the Instagram videos together into a feature—now streaming on Vimeo, for sale on VHS, and available to rent at Beyond Video—that is both expansive and, due to its IG origins, essentially resets itself every minute or two, giving it a hypnagogic pace all its own. 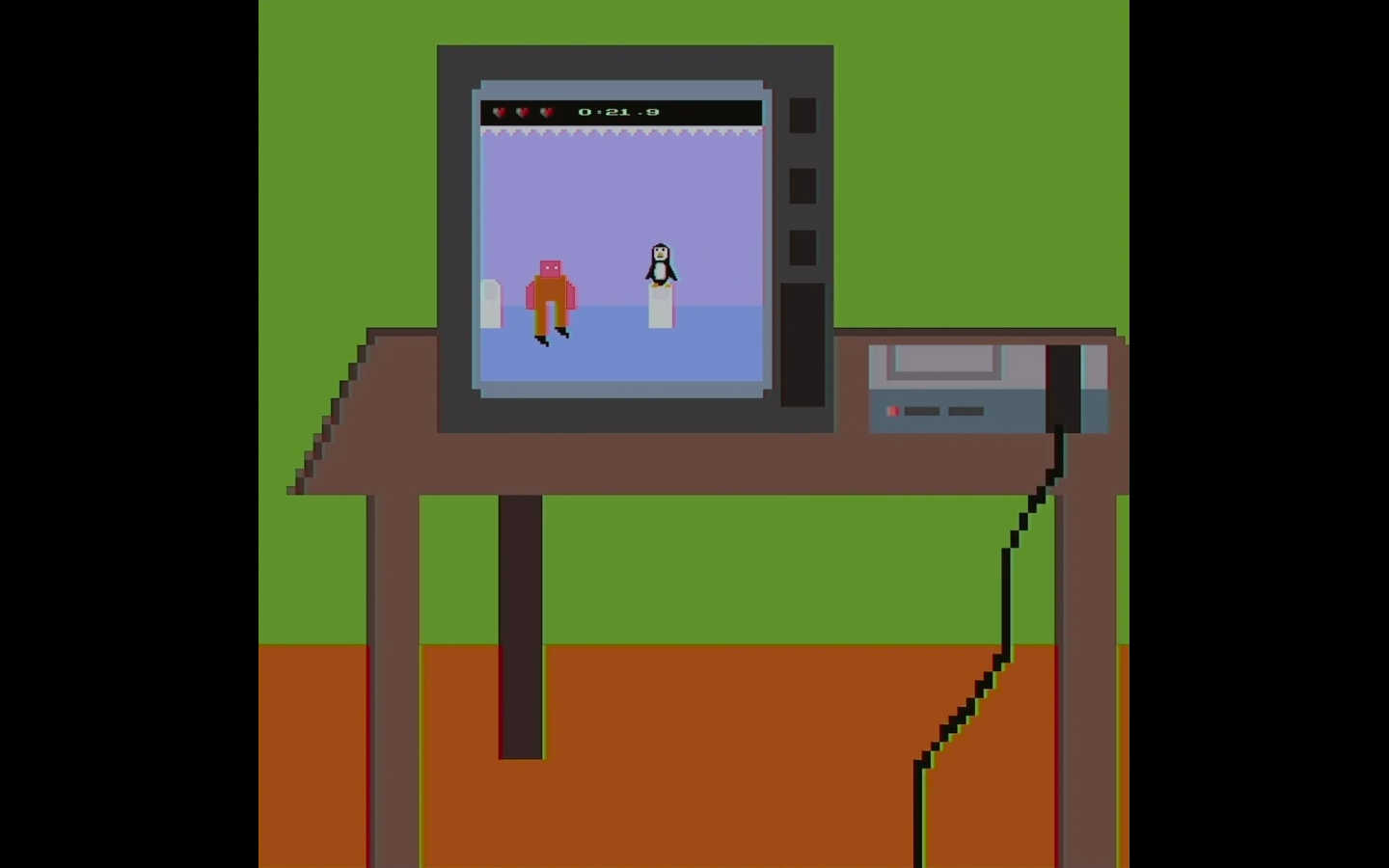 Consider this sequence of events around the 20-minute mark. Fanny obsessively plays a Nintendo game titled Penguin Pusher where she controls a pink man in overalls who pushes penguins off pedestals. After a particularly frustrating “Game Over,” Fanny walks over to Tux, who is standing on a chair trying to change a lightbulb, hallucinates him as a penguin, and pushes him off the chair.

Next scene: They are outside, near a crackling fire, Tux’s arm now in a sling.

“It’s nice to sit around a fire on a cool evening,” Fanny says.

“The flames, pure action. A never ending fever, a dance of torrid light. Those vagabond embers, exiled from their home drifting upwards into the solemn night,” Tux says. “Doomed to be swallowed by the cold nothingness above.”

Birney illustrates the fire at the bottom of a mostly black frame: a shifting, angular blot of brown represents the flame, stray pink pixel sparks fly upwards, hopping up the screen.

“A sacred reminder of our delicate and fleeting lives,” Tux says, in close-up, the brown blot reflected in his eyes.

The scene after that: Tux’s sling catches a gust of wind and sends him into the sky where he has a quiet moment with some migrating geese. Tux and Fanny is special in this way. Birney’s animation offers a painter’s appreciation of nature and its sweet details. The goose’s eye. The way it opens its odd, icky mouth just a little bit. 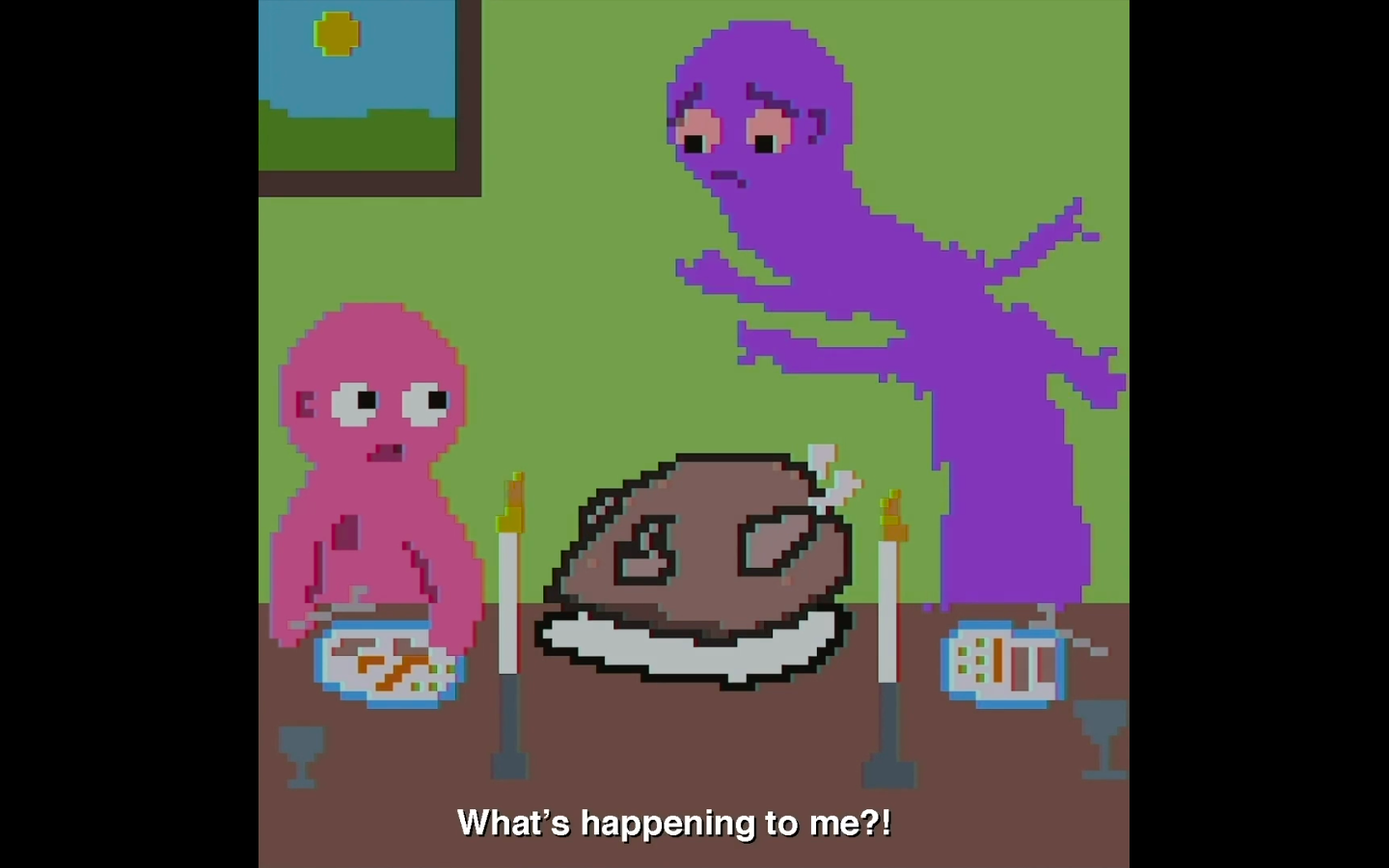 I recently rewatched David Lowery’s devastating, ridiculous A Ghost Story and realized its concept is absolutely Albert Birney-esque: A Ghost Story’s main character dies in a car crash and returns as a ghost who we watch for the next 80 minutes or so silently wandering around with a sheet draped over him, two black holes for eyes (the simplest, silliest idea of a ghost), haunting his wife and the house they lived in, and the party house it eventually becomes when she moves out, and the gentrified high-rise that occupies that chunk of land after the house is demolished, and the field it was 100-plus years before a house was there.

Eternal recurrence, time is a flat circle—big ideas here, you know—delivered by way of a stark simple character that is symbol, object, and person all at once with as much screen time spent on the supposedly humdrum as metaphysical—that’s A Ghost Story and that’s Tux and Fanny too.

In one scene, Tux points out that the massive turkey they’re eating is likely that way because of growth hormones which freaks Fanny out and she immediately turns into a twisted, John Carpenter’s The Thing-looking creature. What could be an absurd gag that comes and goes is instead a tangential subplot—a problem for Tux and Fanny to solve—continuing into the next few scenes until, RPG-like, the discovery of a “magic acorn” inside of a deer skull inexplicably turns Fanny back to normal. Later, Tux luxuriating in the feeling of stuffing a q-tip in his ear after a shower, blanks out when he shoves the q-tip too far in there (feels good man) and touches his brain. Fanny sees him sleepy-eyed and drooling as a result, and then we climb inside Tux’s mind where this brain poke opened up a world of forms represented by Tux spinning around bug-eyed, a shabby mandala of q-tips whirling behind him, all set to triumphant music.

These kinds of tone shifts make Tux and Fanny an antidote to the “endless scroll cinema” I mentioned a few weeks ago in my John Wick 3 review, where stacked setpieces and grand gestures are doled out to ultimately distract the viewer, a weaksauce kind of “wow”-ing.

I’m not the only one who thought about this, it seems. Richard Brody of The New Yorker wrote in his review of Tux and Fanny that it “is far more imaginative and more inspired than the clangorous gyrations” of Spider-Man: Into the Spider-Verse, another snazzy Hollywood product with enough vision to make it seem better than it is.

This is not just about boosting DIY filmmaking instead of Hollywood (though yes, do that, obviously), it’s about how Tux and Fanny is particular—and inventive. You can clearly see how Birney created these cartoons. It’s not that you could make them yourself, but that you see the seams sometimes and those seams are inspiring, handing off the sense of awe for movies and cartooning that Tux and Fanny have about the odd Atari world Birney has built around them. 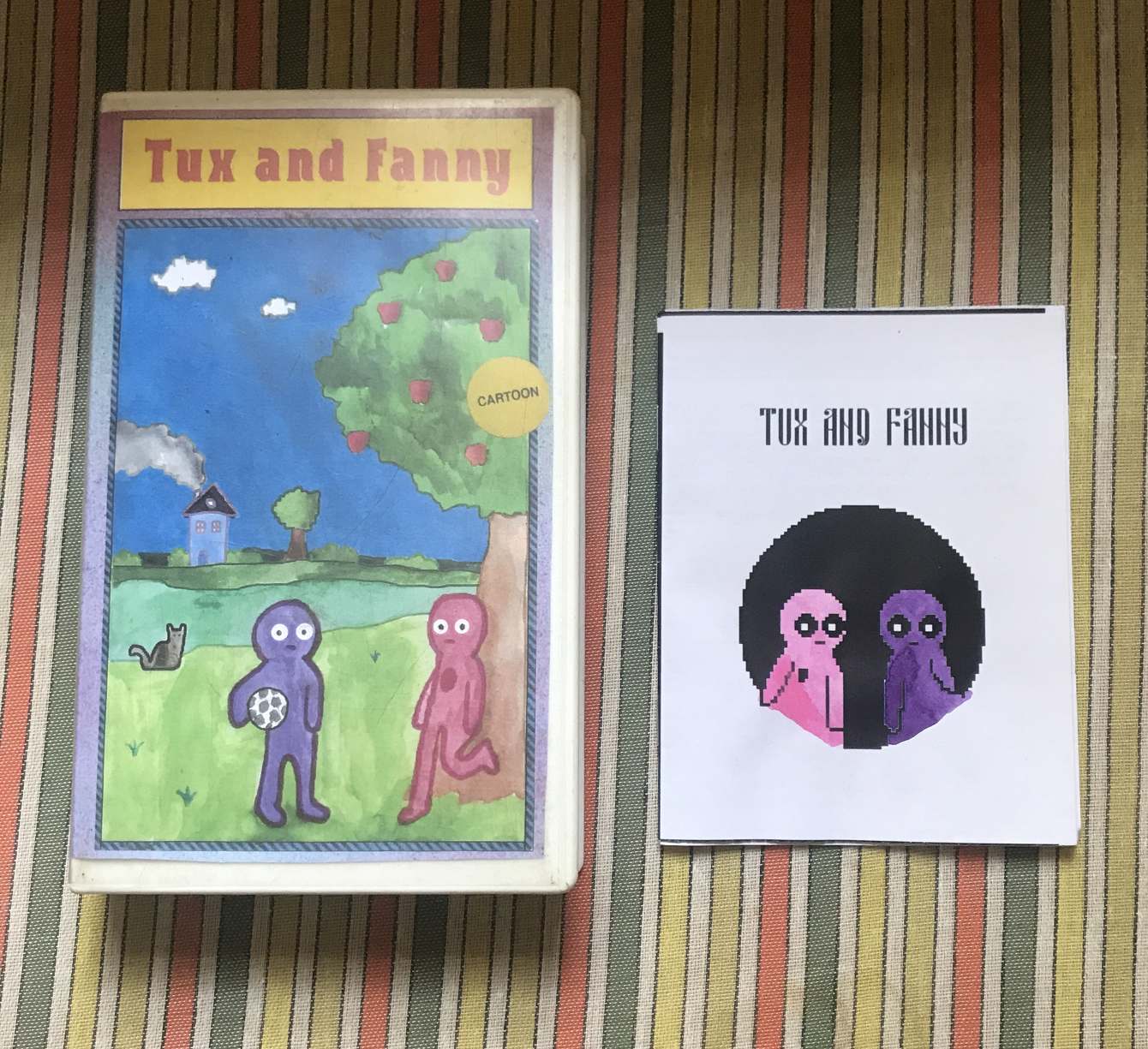 This time we have picks from Tux and Fanny creator Albert Birney. As will always be the case, in an attempt to counter the very convenient though inarguably movie culture-killing world of streaming, these recommendations are limited to movies that are available at Baltimore’s nonprofit video rental store Beyond Video (2545 N. Howard St.), of which Birney is a collective member. We violate that rule a bit this week, with one selection Birney says Beyond Video does not have in its inventory and another which is not a movie at all but old computer game.

The Night of the Hunter (Charles Laughton, 1955): “Contains a haunting sequence where the young brother and sister drift down the river at night. Stole a few shots outright for Tux and Fanny’s river journey.”

My Neighbor Totoro (Hayao Miyazaki, 1988): “Love how gentle this movie is. It feels like a cool summer breeze. Very inspired by the attention to detail.”

Microcosmos (Claude Nuridsany and Marie Pérennou, 1996): “Lots of beautiful bugs, up close and personal. The scene with the snails is my favorite.”

It’s Such a Beautiful Day (Don Hertzfeldt, 2012): “An animation made by one person over many years. Funny, sad, profound.”

King’s Quest III (Sierra Entertainment, 1986): “It’s a computer game but it feels very cinematic. I loved all of the Sierra games. Never grew tired of clicking around the screen and uncovering secrets. These games felt like whole universes you could explore. Huge inspiration for the world of Tux and Fanny.”