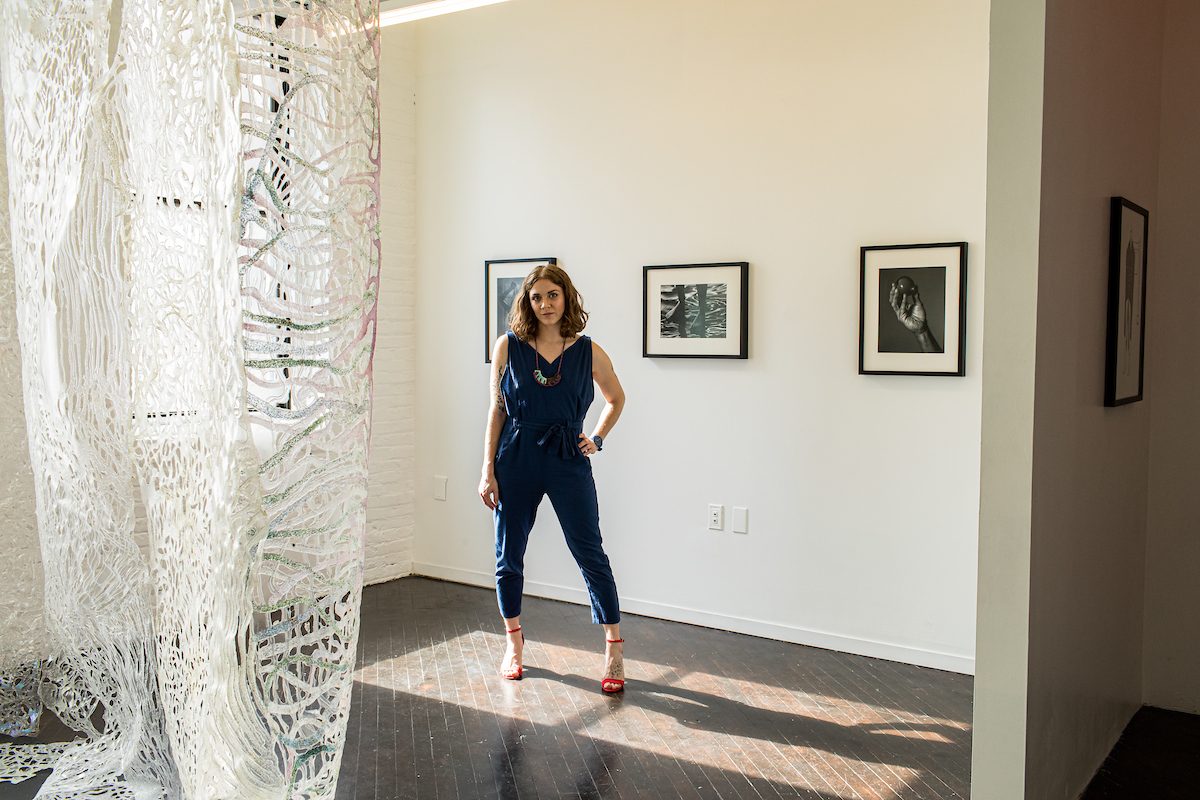 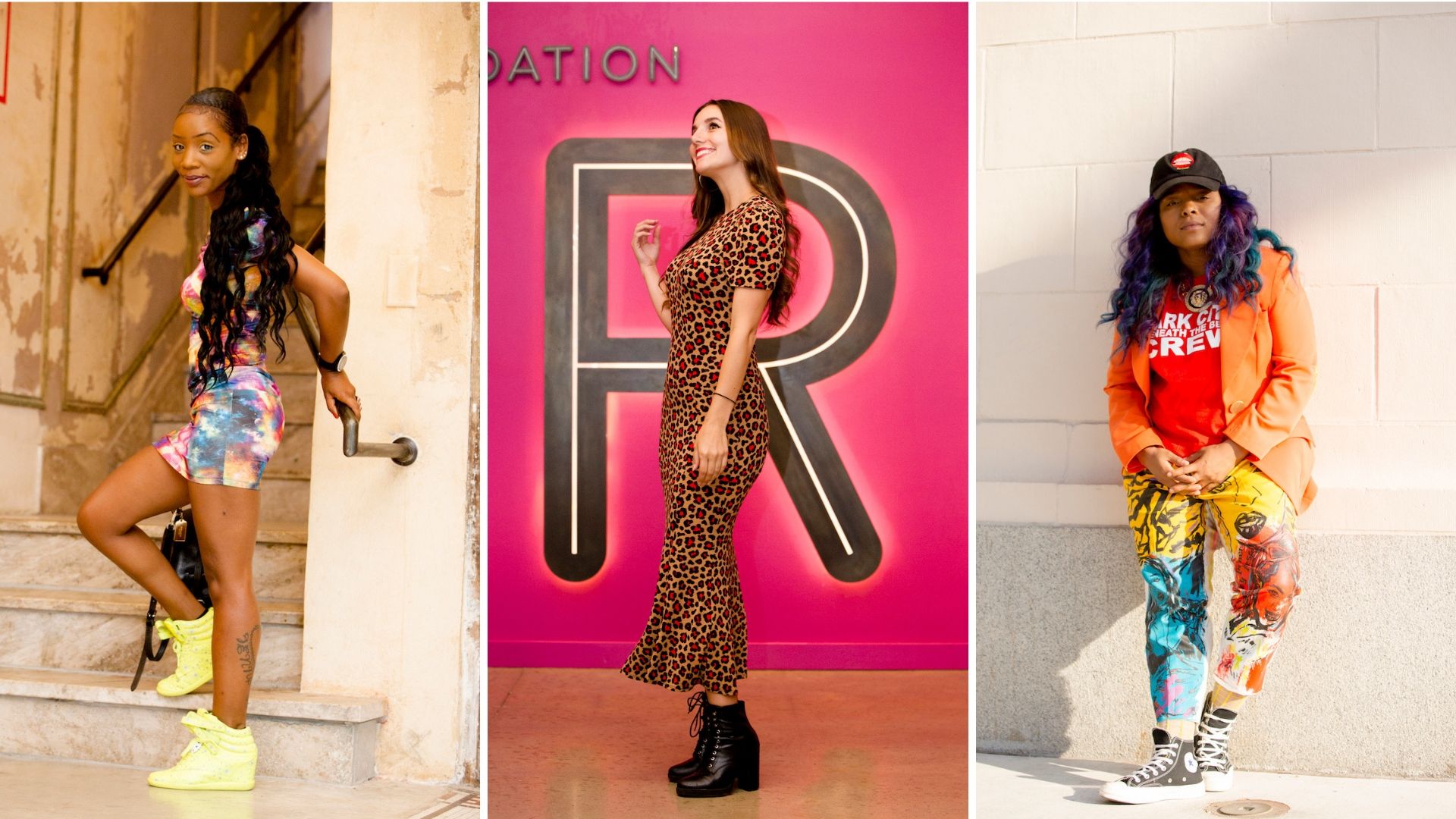 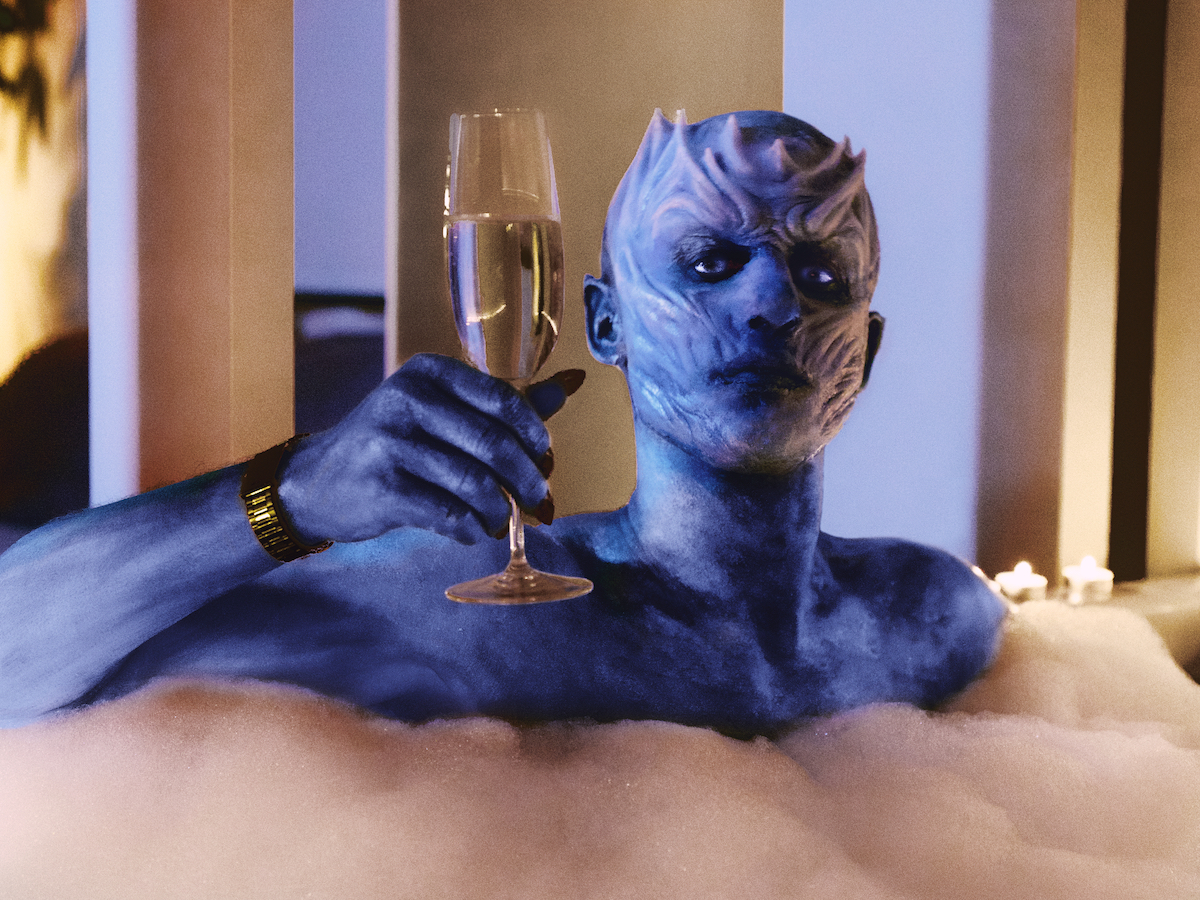 At the Baltimore Museum of Art, a museum that is free, on its most easily accessible floor, not far from one of its entrances, you can wander into a dark room and catch a few shorts that parse the economic bloodbath that was the financial crisis, present President Barack Obama as our Recuperator In Chief, and show how sexual freedom and economic freedom can pretty much be one in the same. These three radical, relatively straightforward shorts are a small part of A Good Crisis by the art collective DIS, a sprawling, ridiculous exploration of the economic crisis, on view through Nov. 17.

A Good Crisis features a blue monster that is basically the Night King from Game of Thrones in a tailored suit stalking around Wall Street at night, talking at you, like somebody in a car insurance commercial firing off soothing, sell-able facts, punctuated by filibustering, Riefenstahl-meets-reality-TV B-roll (flags flapping, rain-slicked streets). Though here, as is the case with most of the material in this Adbusters-but-less-bro-y exhibition, the presentation is deceptive, and Night King here is selling you on the rage you should have over the long-term effects of the financialization of the United States, with a focus on private-equity shitlord Steven Schwarzman of the Blackstone Group. The Night King, bitter, also observes that an economic revolution doesn’t need to happen, it happened, and is happening—it just isn’t the one that many of us wanted. It’s the one that stole wealth, screwed people over, and will likely keep generations stuck in debt, without assets, and renting for life.

Obama Baroque presents Financial Crisis-era mall fashion aesthetics with a voiceover connecting a media moment for entertainment about rich awful people and their problems (Gossip Girl, reality television) to the election of Obama, a historic moment for the country and, arguably, a terrible distraction from some unresolved issues at hand. In UBI: The Straight Truvada, writer Christopher Glazek traipses through an intentional community, handmade IUDs being constructed behind him, monologuing about IUDs and PrEP and the cyberpunk sexual uprising that is upon us—if and only if, Glazek argues, it is paired with economic freedom, found most likely through Universal Basic Income. Otherwise, we are all just freely fucking. Empowering in and of itself, sure, but hardly revolutionary.

Radical in their politics, neoliberal in their delivery—pleasant, calming, hip in that market-researched way, these shorts look and sound like commercials or those snappy explainers Vice and Vox regularly crank out. Stopping by the BMA and catching these shorts is about as close to stumbling into radicalization as you can get, short of getting stuck in traffic as the JHU Against Militarization march moves through Baltimore, as it did last week. (Instead of appreciating knowledge coming to one’s driver’s side window, at least one driver tried to run the protesters over.) 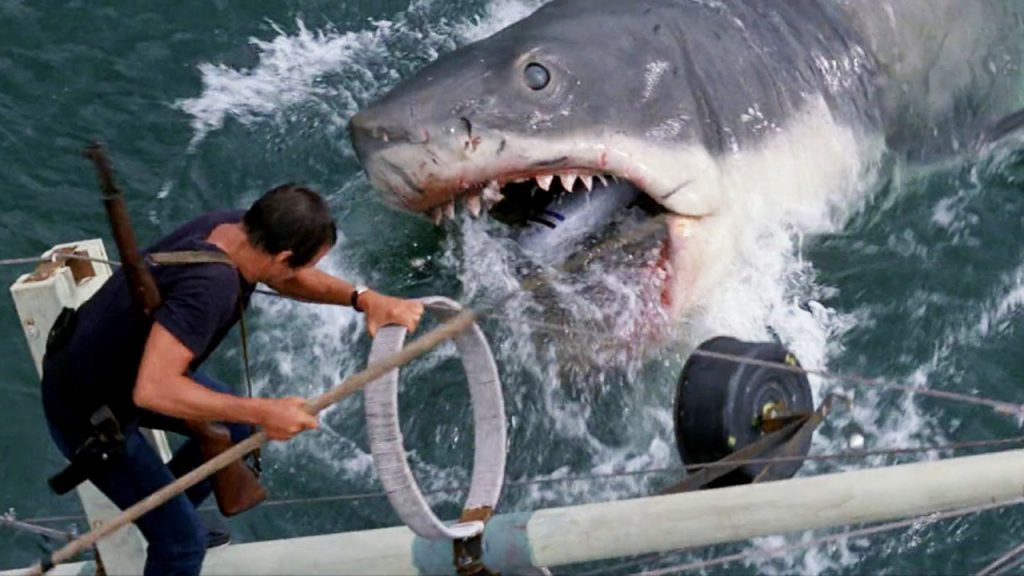 Somehow, I had never seen Jaws, which is screening outside for free at the Roland Park Eddie’s supermarket later this month (July 24 on the sidewalk; July 25 on the side lot). If, before this month, I have referenced Jaws or ever been like, “Yes, ha, like in that classic movie Jaws, I fully understand that reference” in your presence, I was faking it, trying to be like a regular American who has seen this Fourth-of-July-weekend-set shark murder actioner. Sure, I know the movie well enough to get the joke when it is parodied in, say, my favorite movie of all time, Master of Disguise, and surely I absorbed parts of it through constant cable TV airings, but I had never watched it.

For most of its running time, Jaws is sort of a hang-out movie about shark attacks where a police commissioner battles with business-minded types and the mayor who worry that too much talk about this killer shark chewing up tourists will hurt tourism and the town’s bottom line. Oh, for a time when a police official battled rather than bent over backwards for business types! In that sense, A Good Crisis echoes: Allowing regular folks to die so powerful people make more money must be opposed.

Yet this is a scarefest from Steven Spielberg who pulls pathos out of the comfortable and ostensibly unafflicted, so it is all unhurried. We see the important and tedious work it takes to convince a community it has a problem and then, once everybody agrees on the problem, how quick the solution is put into action. The solution is, of course, go hunt the shark. Climate crisis nags Jaws now and I wondered why a giant shark would come so close to land and attack folks. Surely there is a reason. You would not be unwise if in 2019, you rooted for the shark.

There is something communal about Jaws though. It is about this beach town. And there is something convivial about it once the trio (cop, scientist, shark hunter) get on the water to fight this thing together. The classic scene of all three drunk, singing and joking and processing war trauma is a rare portrait of a certain kind of masculinity with its guard down. I regret watching this for the first time at home when I could have viewed it with others, projected outside, for free, where the collective memory surrounding this classic would be floating around in the sticky, lovely summer air. 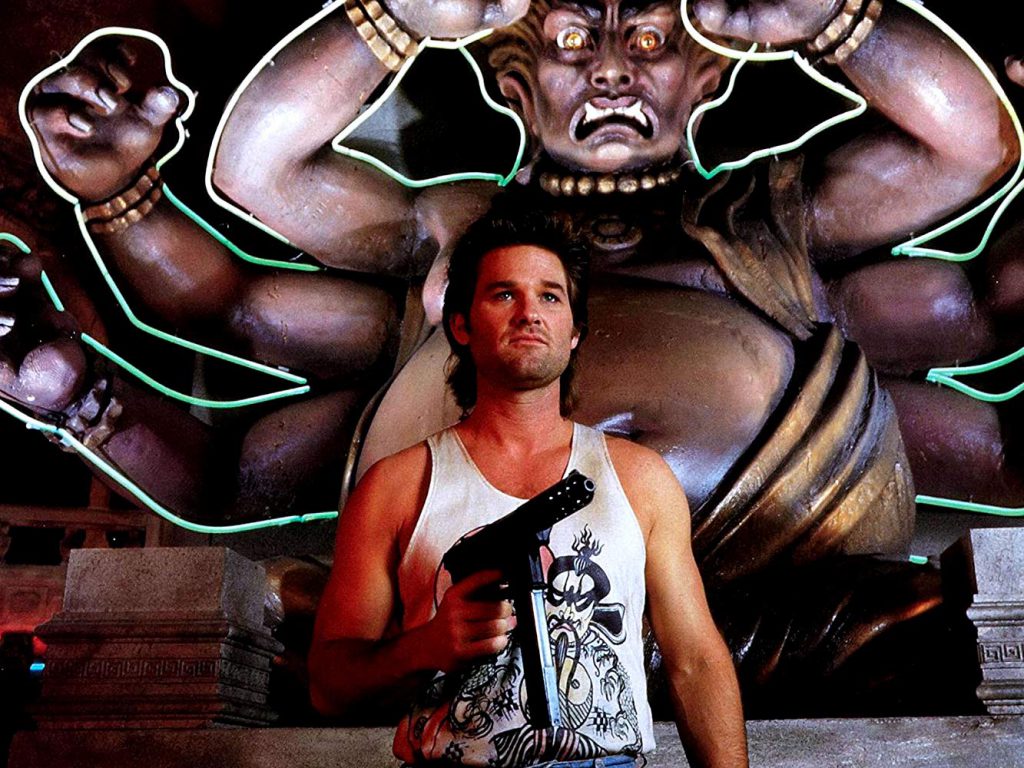 Big Trouble In Little China, screening on July 18 at Creative Alliance is a sort of semiotic clusterfuck of a western, man-on-a-mission movie, kung fu flick, horror romp, and short-lived hicksploitation lark. It is about a trucker named Jack Burton—who Kurt Russell plays as a sort of misremembered John Wayne—who has to save his girlfriend from some sort of kung fu overlord and save the world.

This screening of Big Trouble In Little China is part of the Can I Kick It? series where the concept is simple, crowd-pleasing: The movie is rescored in real time by DJ 2-Tone Jones who mixes, matches, and cuts up funk, jazz, rap, and soul and sets it to the action of a fighting-heavy movie most folks have likely seen and might get something out of seeing a little differently. That it takes a movie out of the control of its creator, decentralizing it from product or even anybody’s personal experience all at once is an inevitable development—and an interesting way to see a nerd classic. If this sort of thing is blasphemous to you, I suggest you grow up.

After all, Big Trouble In Little China is a goof. And really, it is not too different from DIS’s bricolage of signifiers (meanwhile, Carpenter’s sci-fi Reagan evisceration They Live, made two years after this one is DIS-like in concept). And in the way Big Trouble In Little China’s hero is an idiot, it says something about men in charge. In a famous, oft-GIF’d scene, Burton screams and heroically fires his gun above his head, like all the action heroes. The gunfire weakens the concrete ceiling above him which cracks and falls on his head, knocking him out. This gag meant something in the era of Schwarzenegger and Stallone. Libertarian shoot ‘em ups parodied with what is pretty much a Jerry Lewis routine. 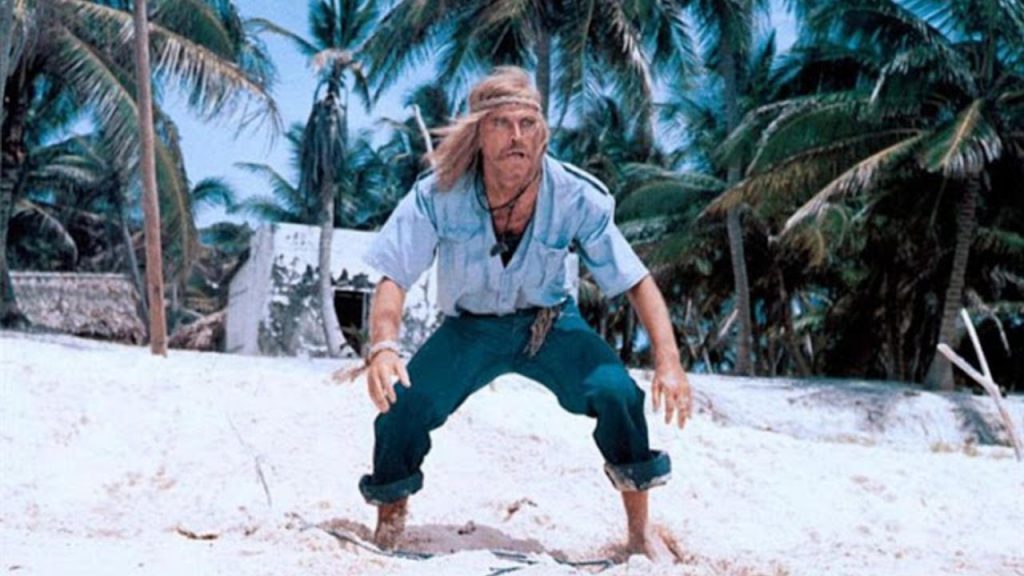 As will always be the case, in an attempt to counter the very convenient though inarguably movie culture-killing world of streaming, I have limited these recommendations to movies that are available at Baltimore’s nonprofit video rental store Beyond Video (2545 N. Howard St.) and movies that are screening somewhere.

–Dinner and a Movie: Activist Duane “Shorty” Davis—protest guru famous for toilet art—and Brian Dolge project Ava DuVernay’s 13th and other political docs around town in places that don’t often see outdoor screenings (such Poe Homes a few weeks ago amid its water crisis) or that don’t want outdoor screenings (such as on the side of City Hall or the jail). As always, Shorty will be grilling too.

–Films On The Pier: On Wednesday nights throughout the summer on the Broadway Pier in Fells Point, free outdoor screenings of Game Night, Oceans 8, Skyscraper, 10 Things I Hate About You, Crazy Rich Asians, Captain Marvel, and A Star Is Born.

–Maryland Film Festival Shorts: During Artscape on Saturday, July 20, the Parkway will be screening a series of shorts from the Maryland Film Festival each hour on the hour from 1–6 p.m., enabling an opportunity to view some truly independent work for free and escape the heat and beer-y chaos of Artscape. Among the shorts is the stunning Moon’s Milk, screening during the animation block and directed by Ri Crawford whose work you’ve seen if you remember the stop-motion sequence in Sorry To Bother You.

–Shark Hunter (Enzo Castellari, 1979): Amplifying slightly the class tensions in Jaws is this Italian shark movie cash-in in which an off-the-grid shark hunter named Mike (who looks a bit like Matthew McConaughey in The Beach Bum) fights gangsters for a buried treasure. A sort of Italo disco, Tintin adventure. You can find this at Beyond Video on a DVD titled Grindhouse Experience 2 which gathers 20 different weird trash movies.