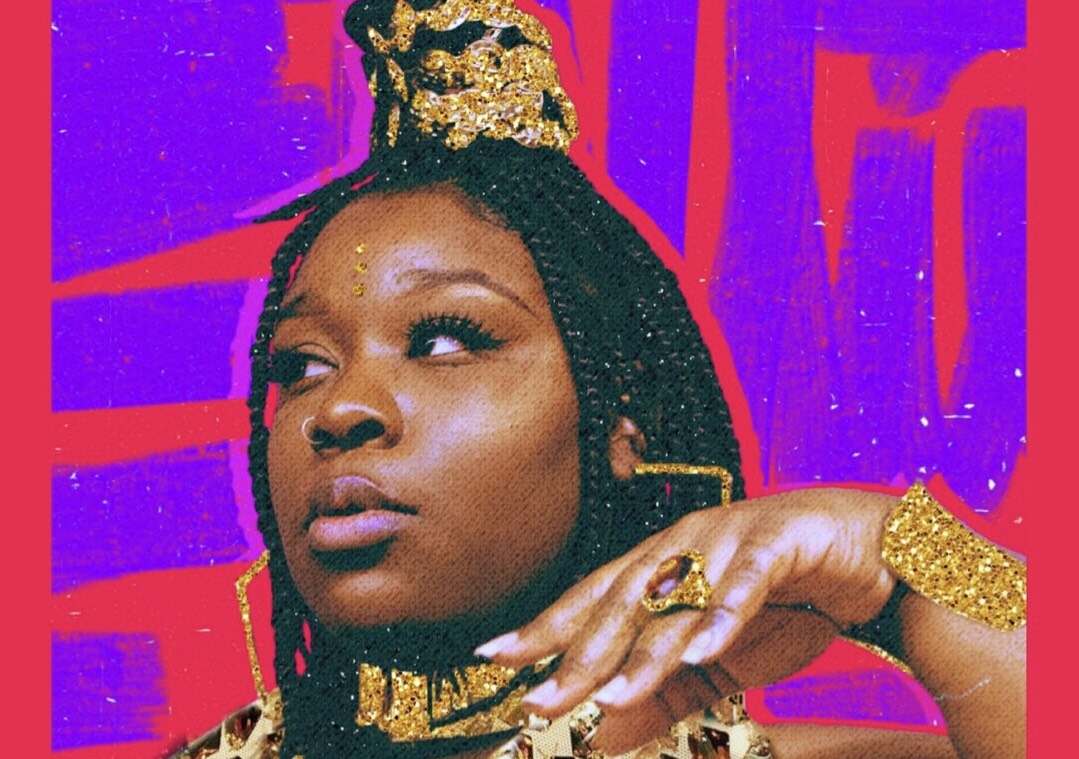 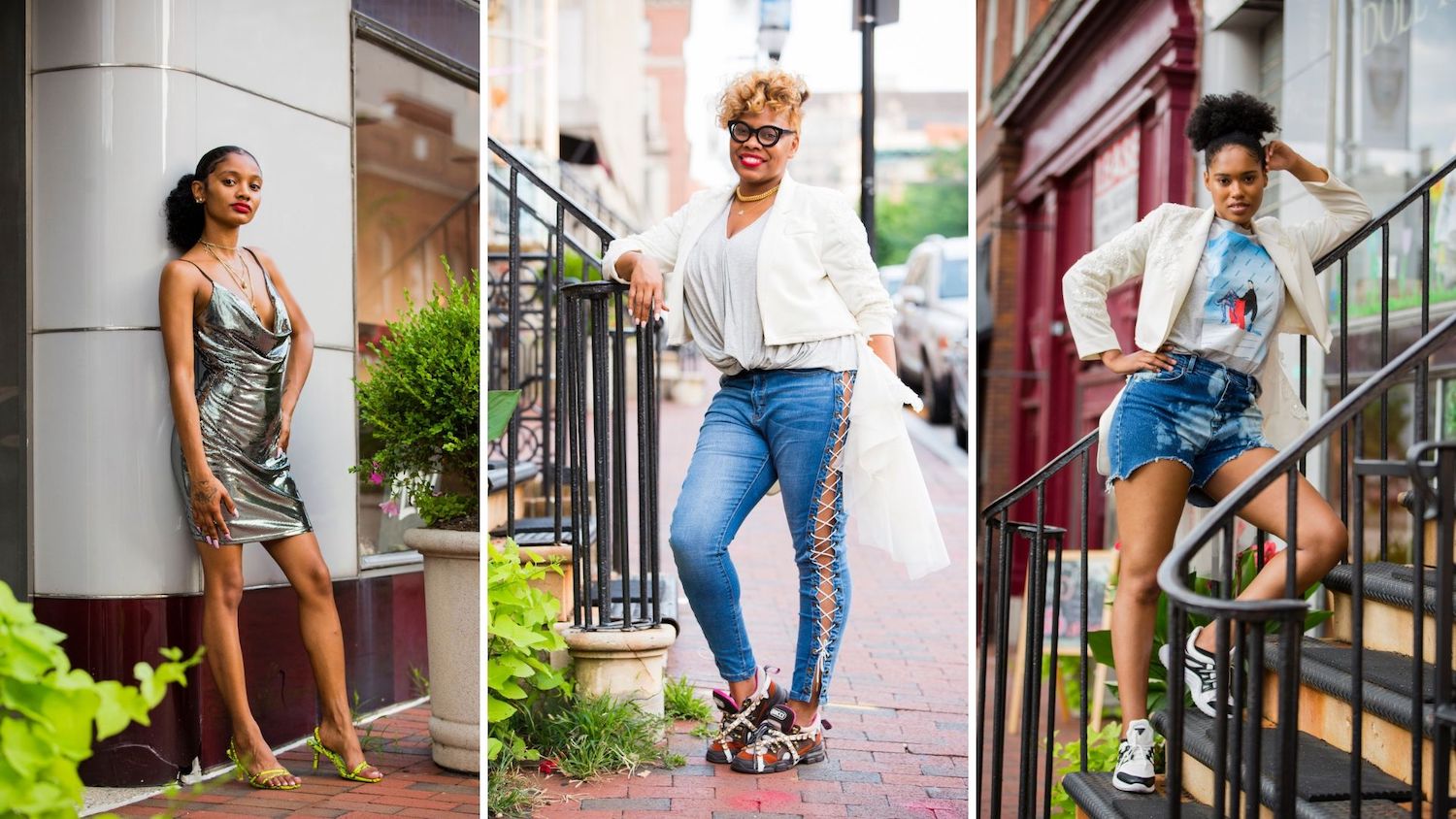 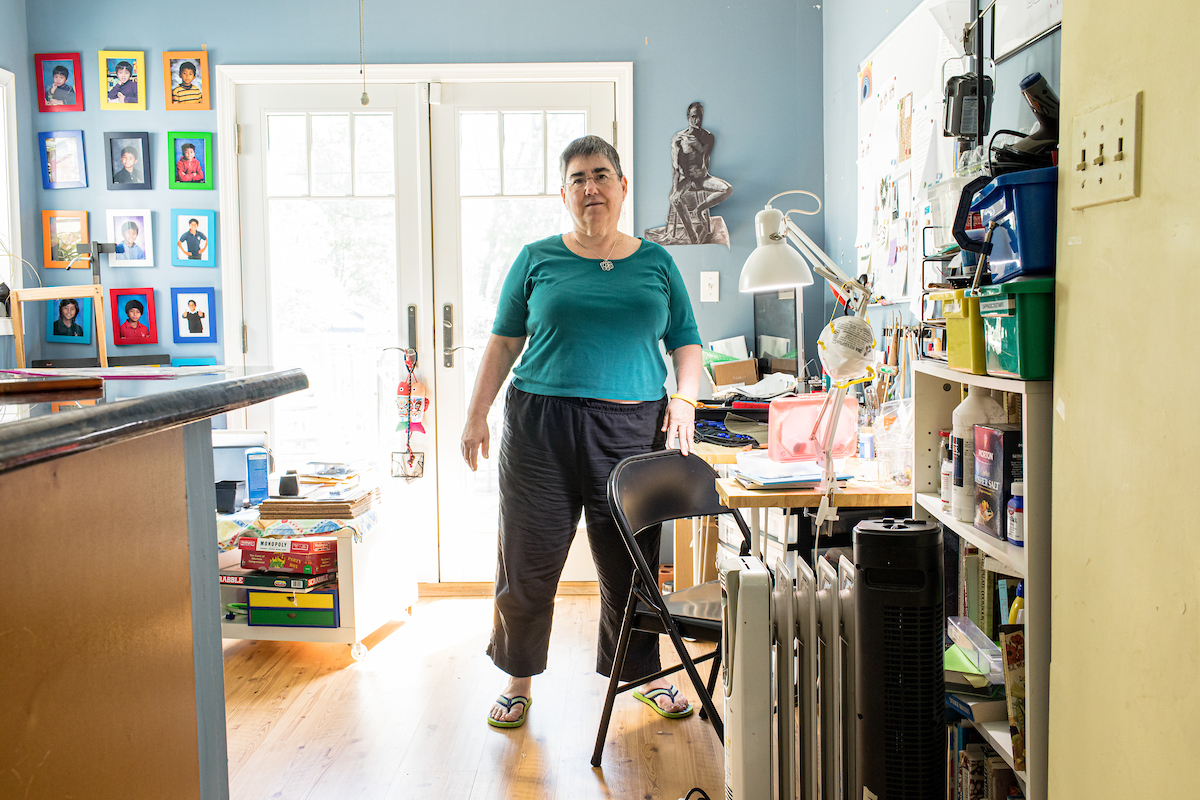 Mary Fissell is relatively new to this. A long-time professor of 17th- and 18th-century English history at Johns Hopkins University, Fissell is also a metalworker, primarily making wearable and nonwearable art jewelry. Once a ceramics enthusiast, Fissell came to metal work later in life, beginning classes at the Baltimore Jewelry Center four years ago and quickly falling in love with working with her hands in a new way. She now prefers metal to clay, citing the tough yet forgiving nature of the material that can sometimes be reworked and reshaped with heat.

In her statement necklaces and oversized pins, Fissell combines a number of processes including fabrication (the cutting up and folding of metal to make 3-D forms), photo etching using a battery, and soldering to make pieces. Her jewelry practice is driven by her appreciation for experimentation within the making process as well as her love for the material. It’s clear that doing this work has opened a door within her to a room she didn’t know she contained. “It’s such a luxury to be a beginner in your fifties,” she exclaims. “There’s something about how it doesn’t matter how much you mess up because you’re past it.”

Fissell explains that over the last year or so, her “life in metal and life as a history professor have started to converge a little bit” because she enjoys making subject-based work that she hopes can make “history visible in new ways.” For Fissell, the granite plinths left behind when the Confederate monuments were removed in August of 2017 by then-mayor Catherine Pugh, have been a source of much inspiration and a way to talk about absence in the present and the function that monuments serve in America today.

For Fissell, the legacy of slavery sits very close to the surface, a presence that she will not ignore or forget. “At Hopkins, I’m very conscious I’m walking on a plantation. But for generations no one has talked about that,” she says. “At times I’m very haunted by this sense of what has come before, it’s like a gut punch.” Fissell cuts and folds metal, forming pins and pendants with simple lines that immediately connote the statue bases for anyone who has seen them in the nearly two years since their occupants were removed.

As a relatively new artist, Fissell is open to learning through the process of making. “I have something to say. I may not be saying it perfectly, and I may not be saying it as well as one day I hope to say it.” There is a self reflective laugh in her voice when she says “to be an artist—you know, it’s taken me awhile to own that, it’s kind of weird to be a history professor who is also an artist—it’s all me though, and if it’s weird that’s fine.” 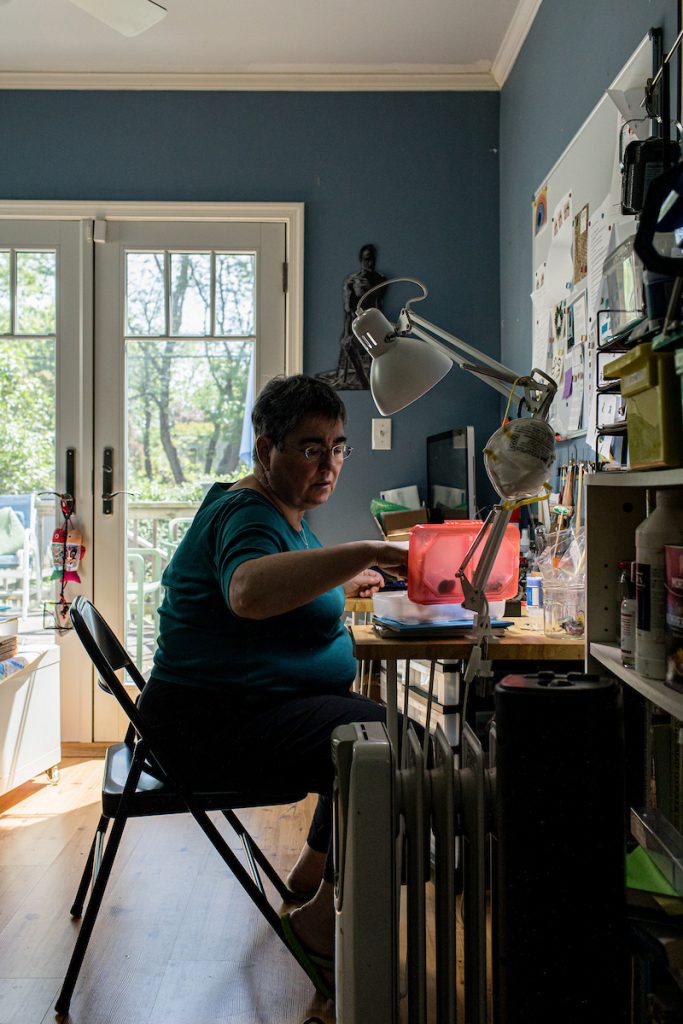 What is the most important book (or books) you’ve read?

Keith Thomas, Religion and the Decline of Magic. It showed me that we could begin to get into the heads of people very unlike us who lived long ago. E.P. Thompson, The Making of the English Working Class. It fired me up to tell stories about people who hadn’t been the focus of historical scholarship, and are instead ordinary people, workers. Both choices are absolutely typical for historians of my generation. What’s not so typical is that the enthusiasm for making a different kind of past visible is what animates my work in metal as well.

Well, I am not much good at taking such advice; I was told not to go to grad school because there were no jobs but I went anyway.

If you couldn’t live in Baltimore, would you live in either New York City or Los Angeles? Another city?

We lived in NYC when I was a little kid, and I have family and friends on the east coast, plus I hate to drive, so realistically, NYC. The first time I flew into LA, I saw that brown-crayon smudge of smog across the skyline, saw the hardscrabble Mediterranean landscape below, and thought, “People aren’t really meant to live here, at least not at this density.” Maybe a few sheep-herders, OK… But whenever I am in LA, I surprise myself by how much I like it! 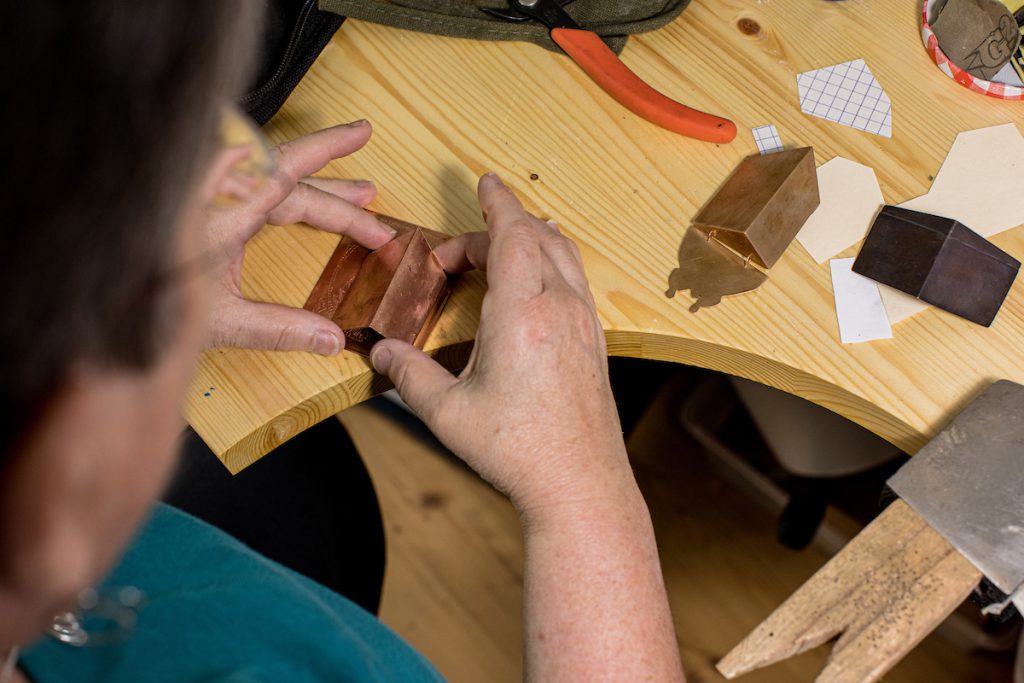 Not to typecast myself, but what I loved as a child was art supplies, anything that you could make things from: paper, pipe-cleaners, crayons, yarn, you name it.

Sandpaper! All my work gets hand-sanded a lot, and I am always running to the local hardware store to get more, just the most basic 3M wet or dry sandpaper that comes in 9 x 11 inch sheets. So grateful that it’s that easy!

Who do you admire? Why?

The artist whom I admire immensely is El Anatsui. He’s a Ghanaian artist who works in metal, he’s probably best known for these stunning large-scale pieces made out of the metal bits from discarded liquor bottles. I admire the vision that transforms scraps like these into glowing beautiful works of art that have a tremendous rhythm and energy; for him, metal becomes like a textile, flowing and drapey. Outside of art, probably Harriet Tubman, for the physical and moral courage of returning to free other enslaved people after she made it out. 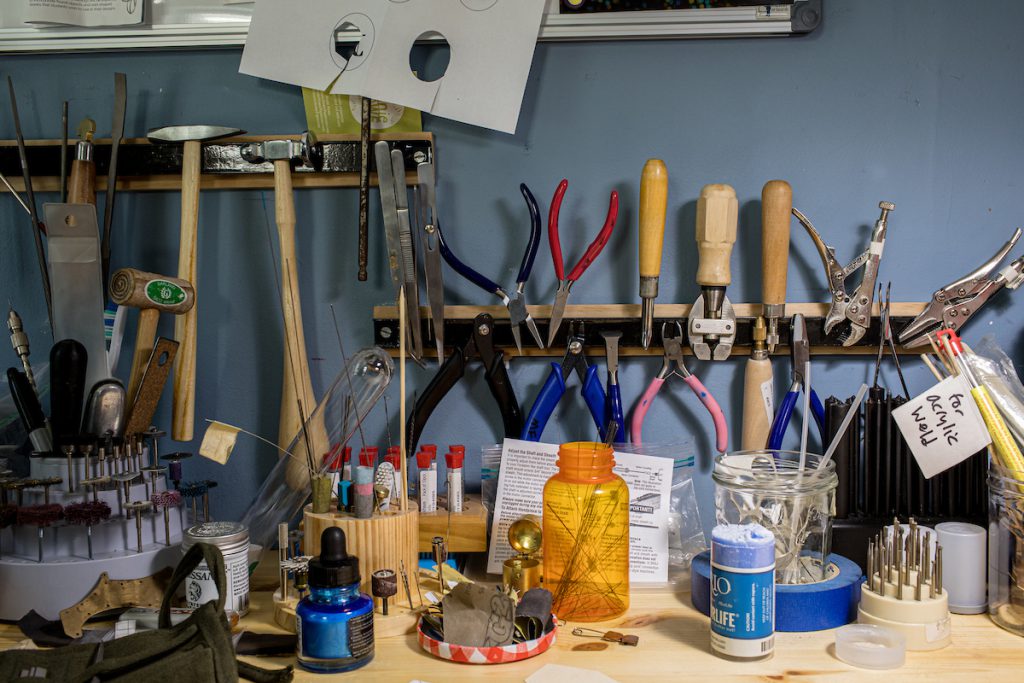 Kindness is not a virtue associated much with either artists or historians, but I think it’s underrated as not somehow fitting well with “smart” or “innovative.” I’m tough creatively and intellectually, but I aim for kindness too.

What is the most rewarding aspect of being a professor? Did you always know you wanted to teach?

I look back now and laugh, I can remember playing “school” with my siblings when I was little, no points for guessing which eldest child got the role of teacher in those make-believes! But no, at various points I wanted to be an archaeologist, a psychoanalyst—really the theme is history, I think. In the milieu that I grew up in, “artist” wasn’t really a thing you became. I have always made things, always, and I’m surprised and delighted by where that has brought me to a second life as an artist. Undoubtedly, for me the most rewarding aspect of being a professor is helping students to develop their work—I feel like a midwife sometimes, helping to bring something new into being. It’s an immense privilege.

Old Bay flavored popcorn, followed by OB potato chips! Old Bay is peppery and salty, but if you live here, it also in a weird way tastes like seafood, by association.

Do you consider yourself an artist?

To be an artist, it’s taken me a while to think, “Oh I am an artist,” now I own that. It’s actually a much more complicated progression than I had realized, to not feel like you’re a pretentious idiot by calling yourself an artist. And what does that mean? It’s kind of weird to be a history professor who is also an artist. But I don’t care about weird, that’s just who I am, it’s fine. And now, my work now is wanting to make the past visible in a different way. So to me, it’s all me. 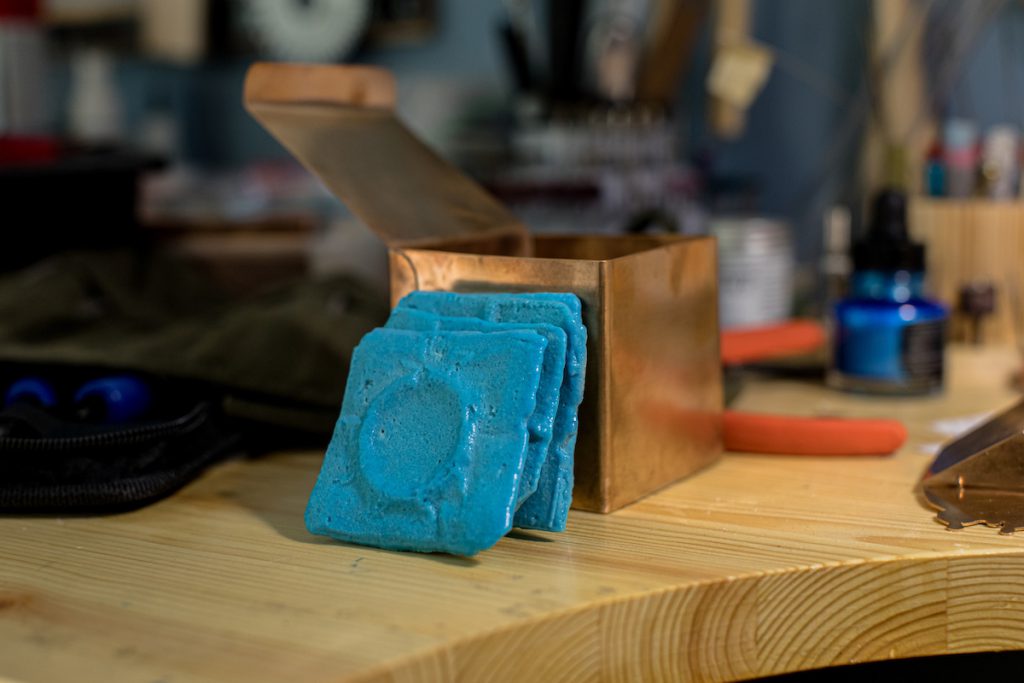 Whose work would you want in your home or to wear on your body? Specific piece?

That’s a really hard choice! Issam Kourbaj’s “Dark Water, Burning World” is a piece I saw a few years ago that has haunted me ever since, so that’s it. It is a series of small metal boats, with matchsticks representing passengers, made in conversation and exhibited with small 5th-century BCE boats made from gold. It’s about Syrian refugees who fled across the Mediterranean and it is, for me, breathtaking. The two sets of boats, old and new, were displayed together at the Fitzwilliam Museum in Cambridge, and my words don’t do it justice. I’d like to have the boats in my home not least because they are of a size to fit in the palm of your hand—and I’d like to hold them, and look closely at them, both the ancient and modern ones.

Do you have a typical day or not right now? Do you wish you had a routine if you don’t or do you thrive on change?

I always do better with routine. For the past year, I have been enjoying not having to use an alarm clock always, as my son went off to art school and so I am not up against a high school clock, but usually I’m up around 7:30. I try to organize my days so that I either get some writing done first, or sometimes some metal work; I’m not a morning person but it really helps to do creative work when the rest of one’s responsibilities haven’t yet taken up too much brain space. I often think of things I want to make or write when I am waking up, so it makes sense. 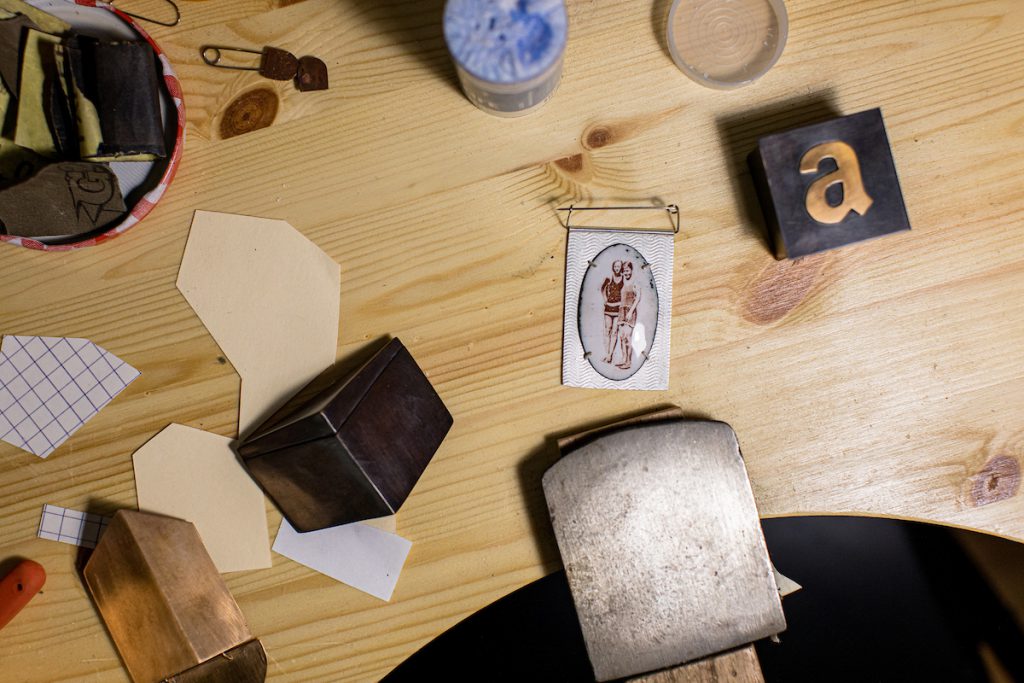 It always makes me laugh that Virgos are supposed to be neat and tidy. My desk and my bench are cluttered, and it’s clear I create just fine in the midst of piles of paper/tools. Of course, I like a neat and tidy workspace, but I would always rather create than clean.

Is there a show you’ve seen in the last 5 years that you’re still thinking about? Why do you think that is?

Common Threads at the Isabella Gardner Stewart Museum in Boston kind of snuck up on me and captivated me; I would not have thought an exhibit themed about tapestries would have been so enchanting, but it was, because of the very wide array of works based in some way on weaving was so diverse. Of course, the exhibition of women artists in metal at the National Museum of Women in the Arts last year was a total delight; the sheer array of work was wonderful. 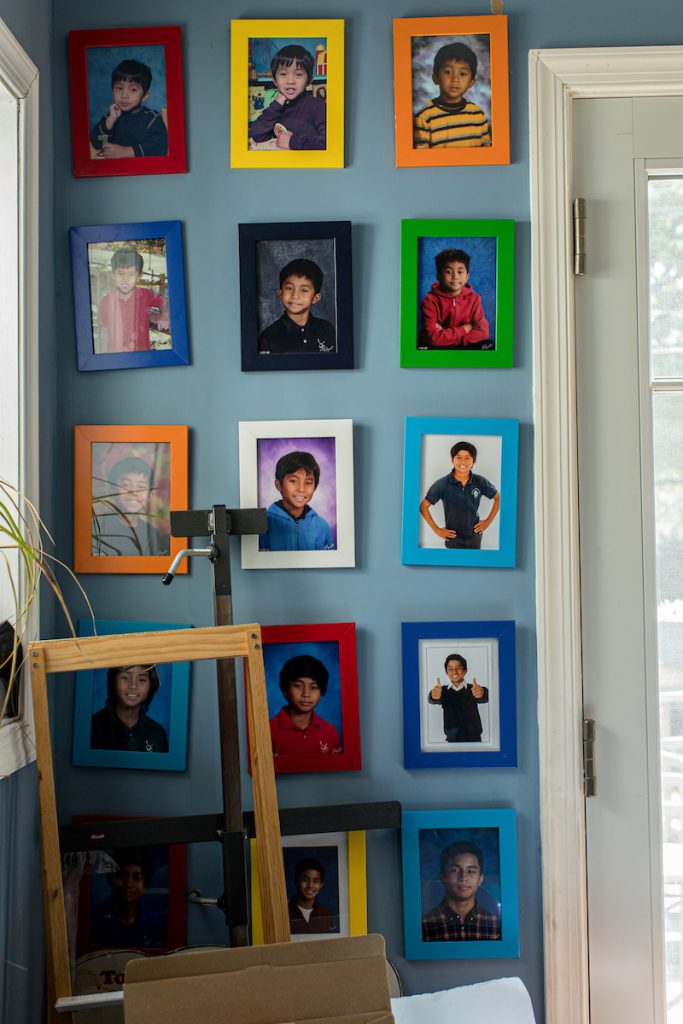 What was the most memorable assignment you have been assigned? What did you make?

I loved being assigned to make a reliquary in my Perfecting class with April Wood. The assignment really made me think about what a reliquary was, how an object made in precious materials could help transform the meaning of a little remnant like fabric or bone that might look ordinary but was actually sacred. I made a miniature lunchbox modeled on the kind I would have loved in my childhood—it has flower power “stickers” on it, and it’s flocked pink inside, where the 2 “relics” live: a small troll, and a Fisher-Price little person, both utterly emblematic of the mid-60s when I was a kid.

She’d be surprised by how happy I am, I think. Like many, I was a fairly melancholic teen. She’d be excited about my life as an artist for sure. 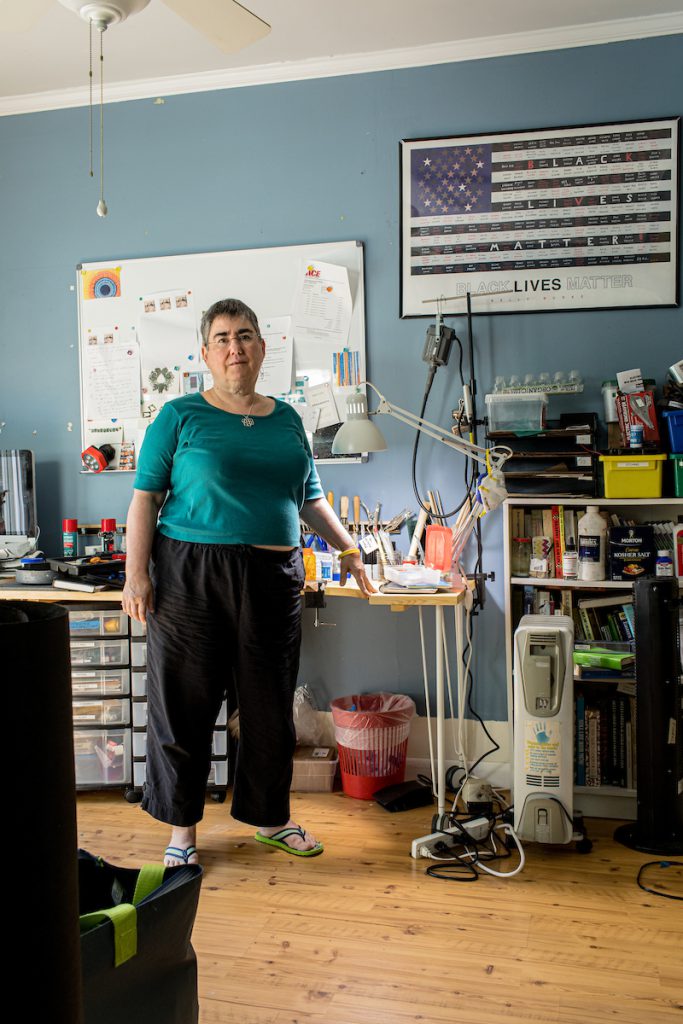