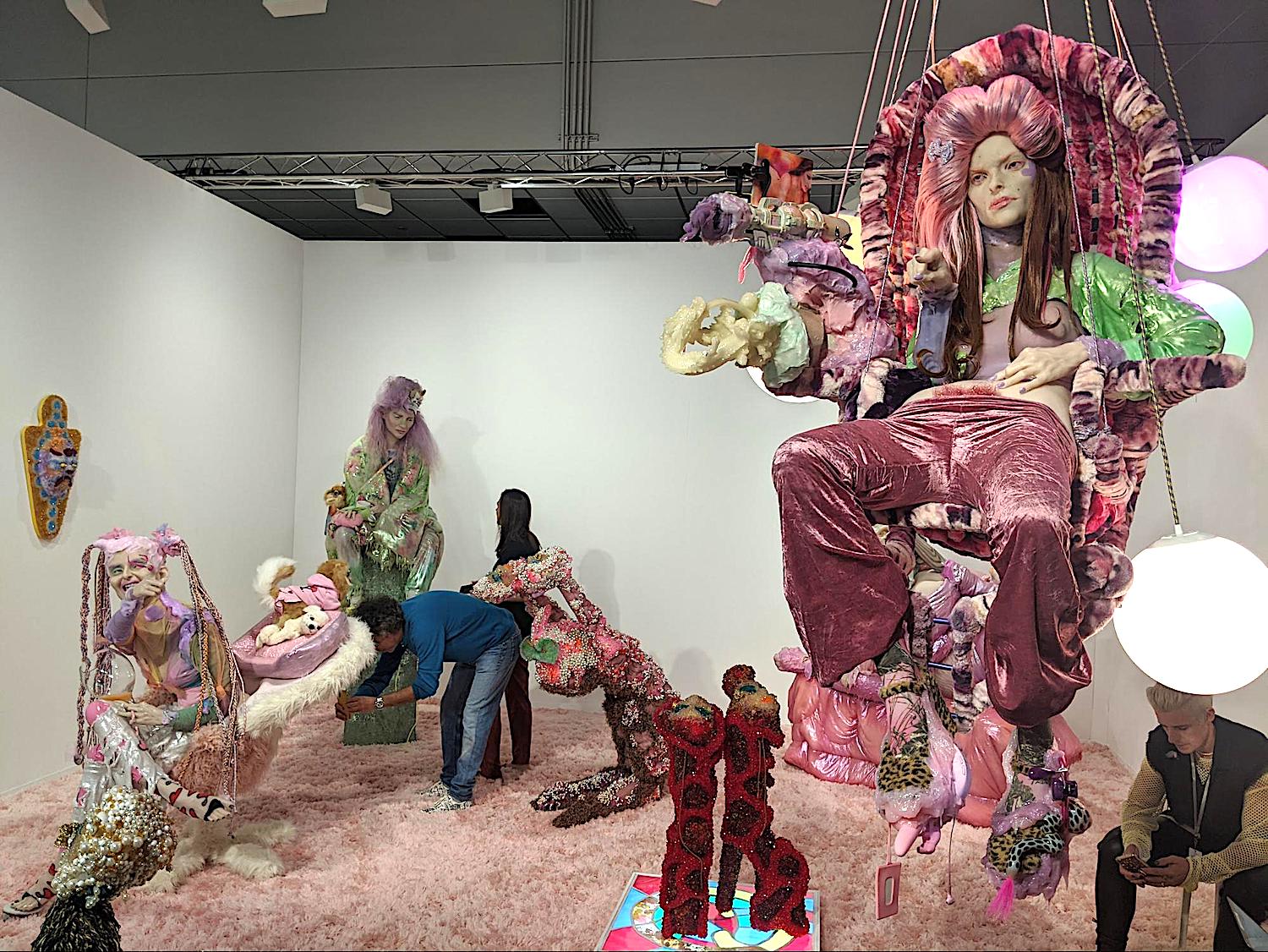 Collecting
Who Is All This For? A Miami Art Week Recap 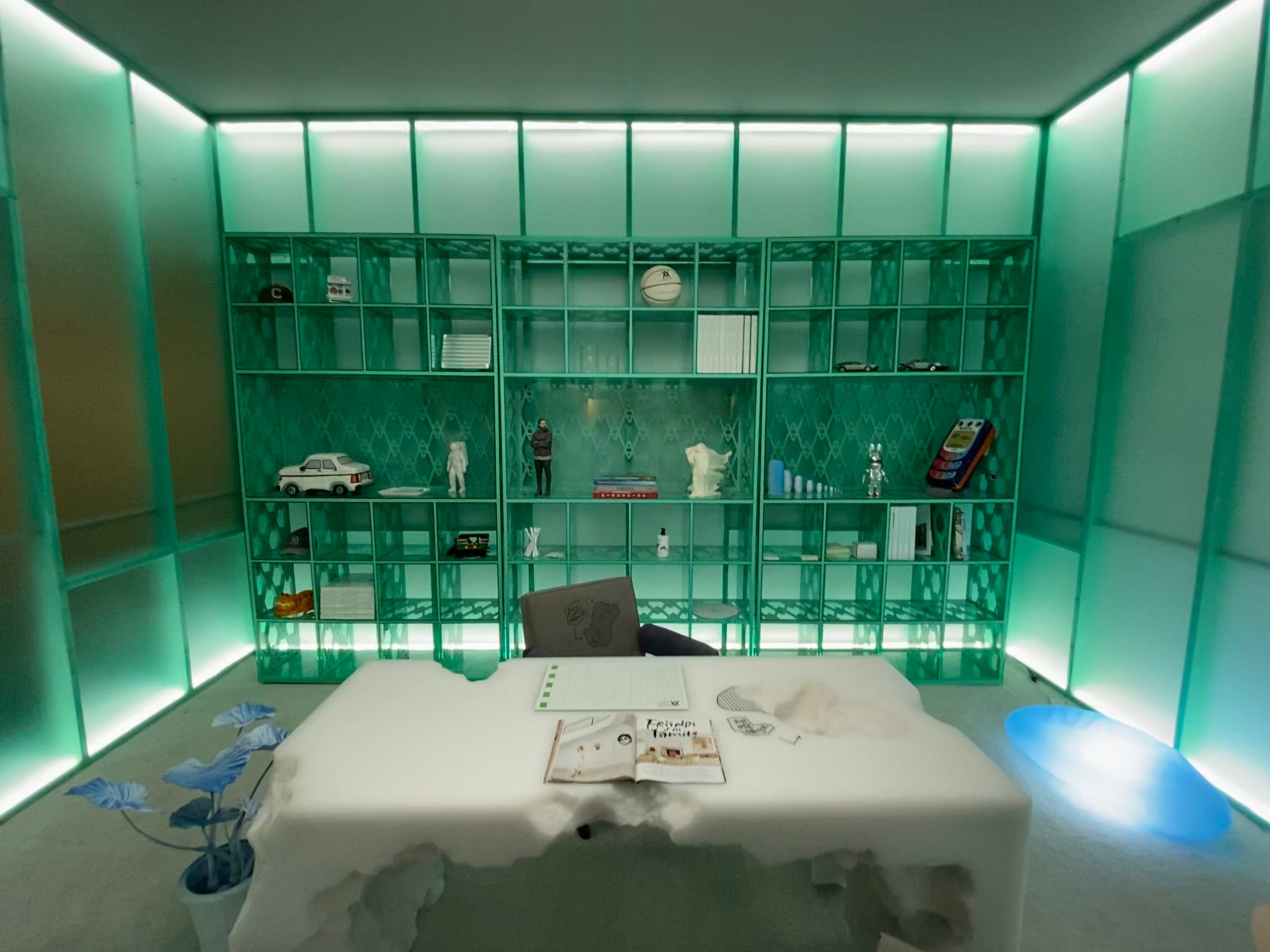 After my fourth trip, I finally think I’m beginning to understand Miami Art Week. It’s a microcosm of the art world and, when I close my eyes and think about previous trips, it’s as if I’ve taken everyone I know and all the contemporary art I’ve ever looked at and thrown them all in a blender to be dumped out on one stretch of coastline. I know that I will see friends from residencies I attended six years ago, former bosses and colleagues, along with art I have already seen in New York or California.

The first year, a friend and I called it vacation and stayed in Very North Miami Beach. We rented a convertible and I drove us to all the fairs. We sat by the hotel pool and visited a gator park and looked at what I thought at the time was a lot of art. The second year, my now-husband and I stayed with friends at their grandparents’ condo in Fort Lauderdale and drove in for the fairs each day. We sat near the ocean (it’s typically too cold in December for swimming in Florida) and went to a tiki bar that feels like a pirate ship. I wrote fair recaps on my phone while my friends (bless them) navigated Basel traffic. The third year, another friend and I rented an Airbnb in the heart of South Beach. The Airbnb’s hot water was broken so we took military showers and got shin splints walking the fairs. We hung out at Club Deuce every night and laughed about art boys’ lazy attempts at flirting while playing pool and drinking tequila and sodas.

This year, my husband and I made a strategic plan and stayed one night in Miami and two nights in Miami Beach. Doing so allowed me to see three museums, three outdoor installations, and six fairs in three days. Because he was there for his own work, and coordinating with friends staying all around Miami is impossible on a tight schedule, I went to the majority of fairs alone. Wolfing down $22 salads, charting the most efficient routes and then marching myself through them, my main goal was Instagramming for the magazine whenever I could get cellular or internet reception which was very, very sparse. As I always have, I saw lots of art I liked, plenty I hated, and some that made me think. I also thought a lot about the inherent limitations of this now crystalized 50-year-old fair system (Art Basel was founded in Switzerland in 1970, Art Basel Miami Beach began in 2002) we’re stuck with. 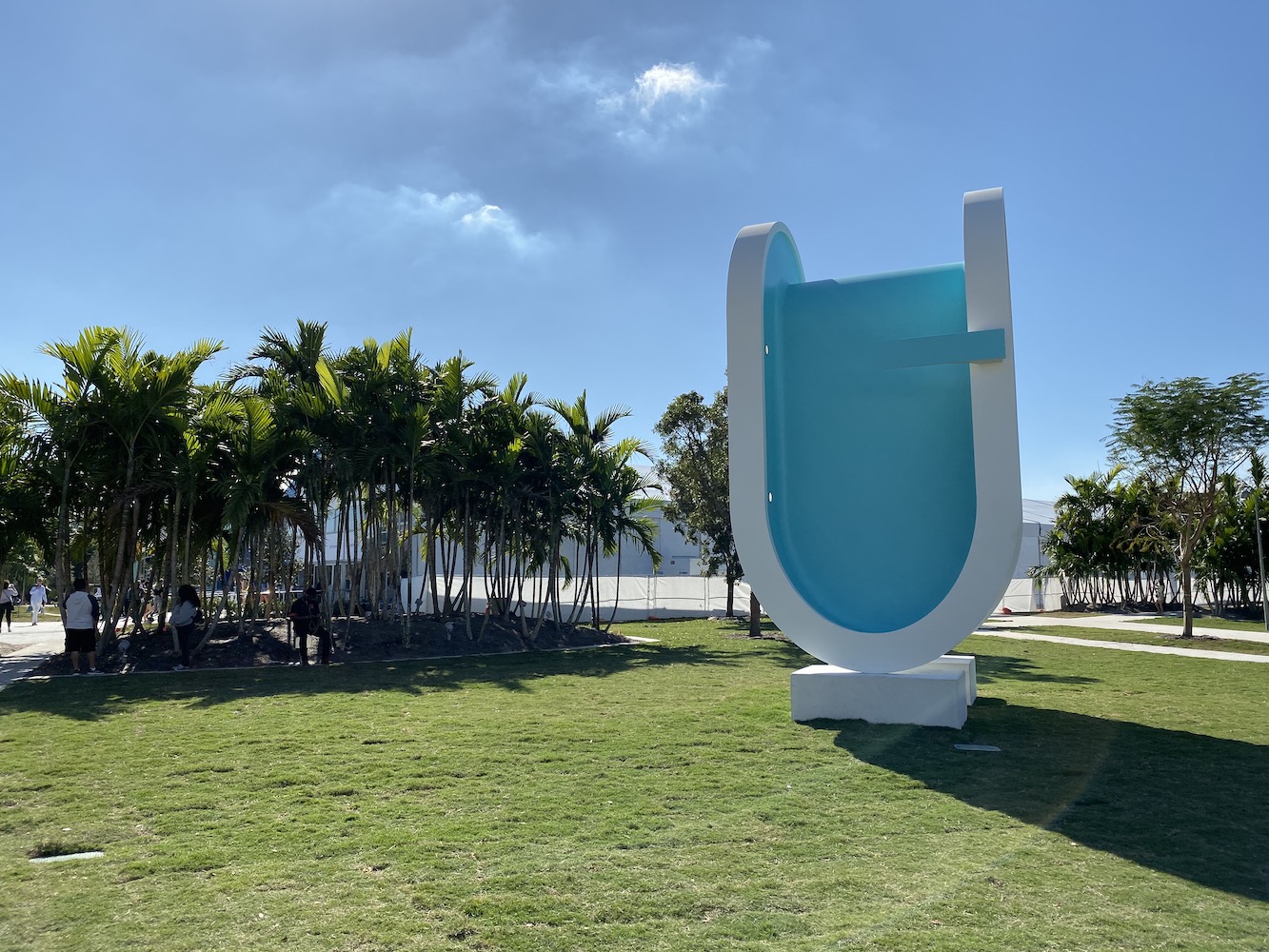 Elmgreen and Dragset’s new permanent installation, Bent Pool, was unveiled this week outside of the Miami Convention Center.
The piece is the final public art work paid for by the Miami Public Art Commission.

Art Basel is not, ostensibly, for me. If you’re reading this, it’s also most likely not for you. Art Basel is a trade show for the über elite who have been anointed responsible collectors and most of the sales happen before the show even holds its public days. That is its purpose and intention, with all of the satellite fairs, regardless of manifestos or so-called mission statements, hoping to suck up some of that excess money and energy. Celebrities and art stars arrive early in the week, attend the parties from Tuesday through Thursday and then largely depart before the average person’s weekend even begins. Much of the work we now see at art fairs is being marketed directly to museums, as with Basel’s new Meridians section. 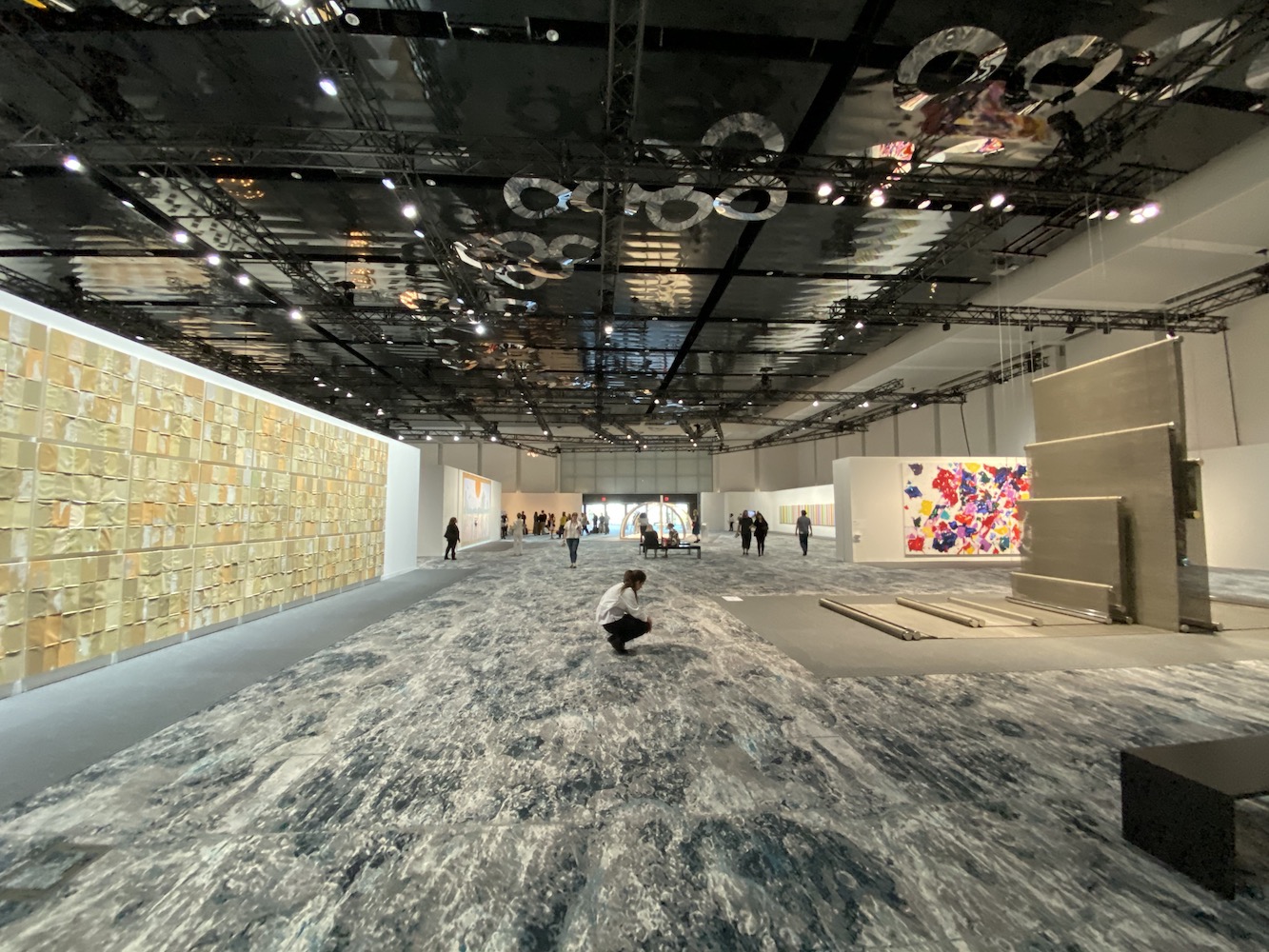 Yet it’s everyone else, you and me, that makes Miami Art Week a downright week-long Bacchanal. It’s us, in our sensible shoes and our Marshalls cheetah print that brings the likes of Heineken, Bacardi, Veuve Clicquot, and countless other alcohol brands to Miami to sponsor lounges and parties. It’s because of us that there are fashion shows and brand releases. It’s millennials, in all our stuff-averse ways, busy collecting experiences and documenting them, that have made Basel, BASEL. Miami Art Week is an experience. If you’re in the art world, it’s an experience you’re expected to have every December or supply a reason why not. One excellent reason why not that I’ve heard from a lot of artists? It’s very, very, expensive to pretend to be rich, even for a few days.

I acknowledge that there are affordable ways to eat and stay in Miami, and if you have time and want to do the research to seek them out, you can bring your costs down considerably. Over the years, I have attempted to apply many of them—staying with friends, sharing a bed, buying groceries instead of meals out, etc. But the average person will need to feed themselves three meals a day and they’ll need to pay for a place to sleep. Then there are transportation costs and fair fees plus the cost of any recreation you choose to indulge in. It’s very possible to spend hundreds of dollars a day, ferrying yourself around as quickly as possible in the allotted hours you have to see everything you can.

I tried very hard to fully enjoy my three days in Miami since each moment was literally costing me. For the first time, I accepted that I was not going to see or do every art thing and that would be okay (I give myself about a B- on accomplishing this; I do feel a twinge of regret that I didn’t make it to Satellite and that I was too exhausted from all my walking each night to do anything besides watch HGTV and fall asleep while my husband was still talking to me).

After being told to go for years, I finally visited Vizcaya and ate at Versailles. Over breakfast one morning, I read a magazine while looking at a hotel’s pool. I sang along with a Lyft driver to “Jingle Bells” while we sat unmoving on the Causeway and talked shop with as many dealers as would engage me. I put my feet in the ocean and I watched some palm trees sway. While it might read otherwise, I did all this to avoid becoming cynical and to try to center myself in my experience of Miami the place. International art fairs are an enormous part of the art market and they aren’t going anywhere. Their enduring appeal seems to leave us with no other option than to descend annually on a sandbar with our best outfits and hope they haven’t yet raised the price of water to $5. 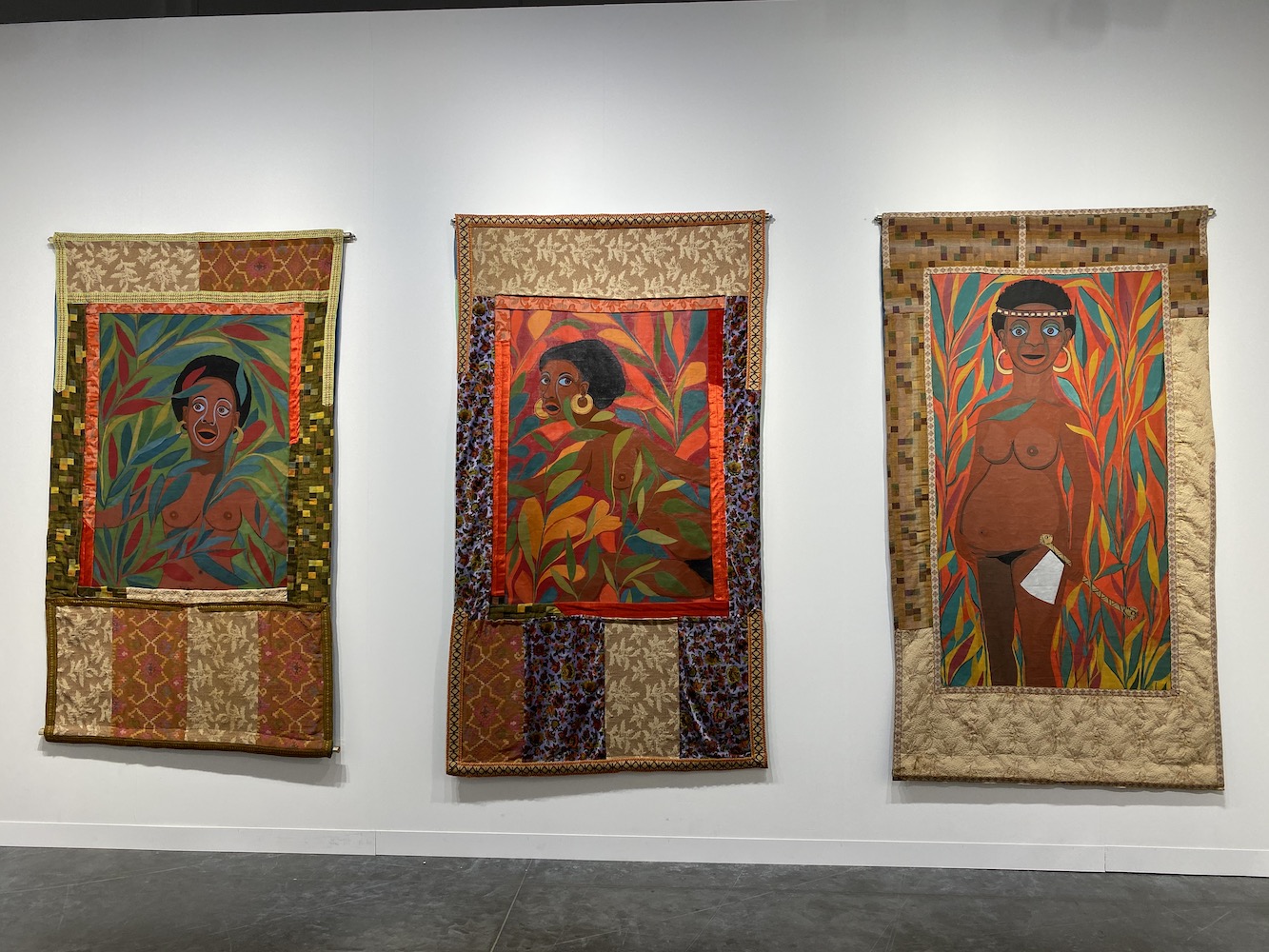 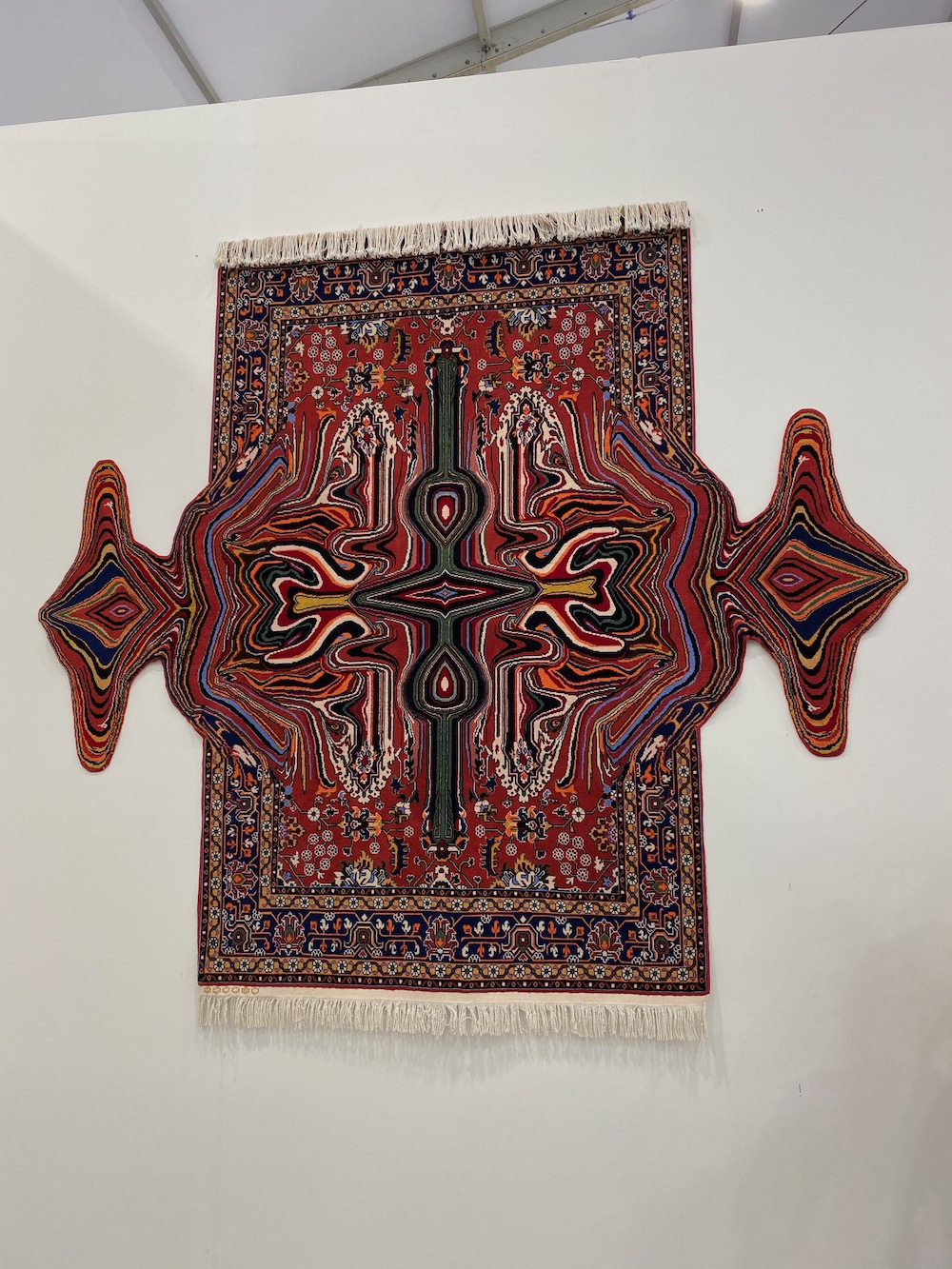 Detail of a molded ceiling at opulent mansion property Vizcaya and the entrance to the main house. Built by infamous bachelor and industrialist James Deering from 1914-1922, the mansion and its gardens are frequently the most recommended attraction in Miami. Painter John Singer Sargent was a frequent visitor and painted the house and grounds. 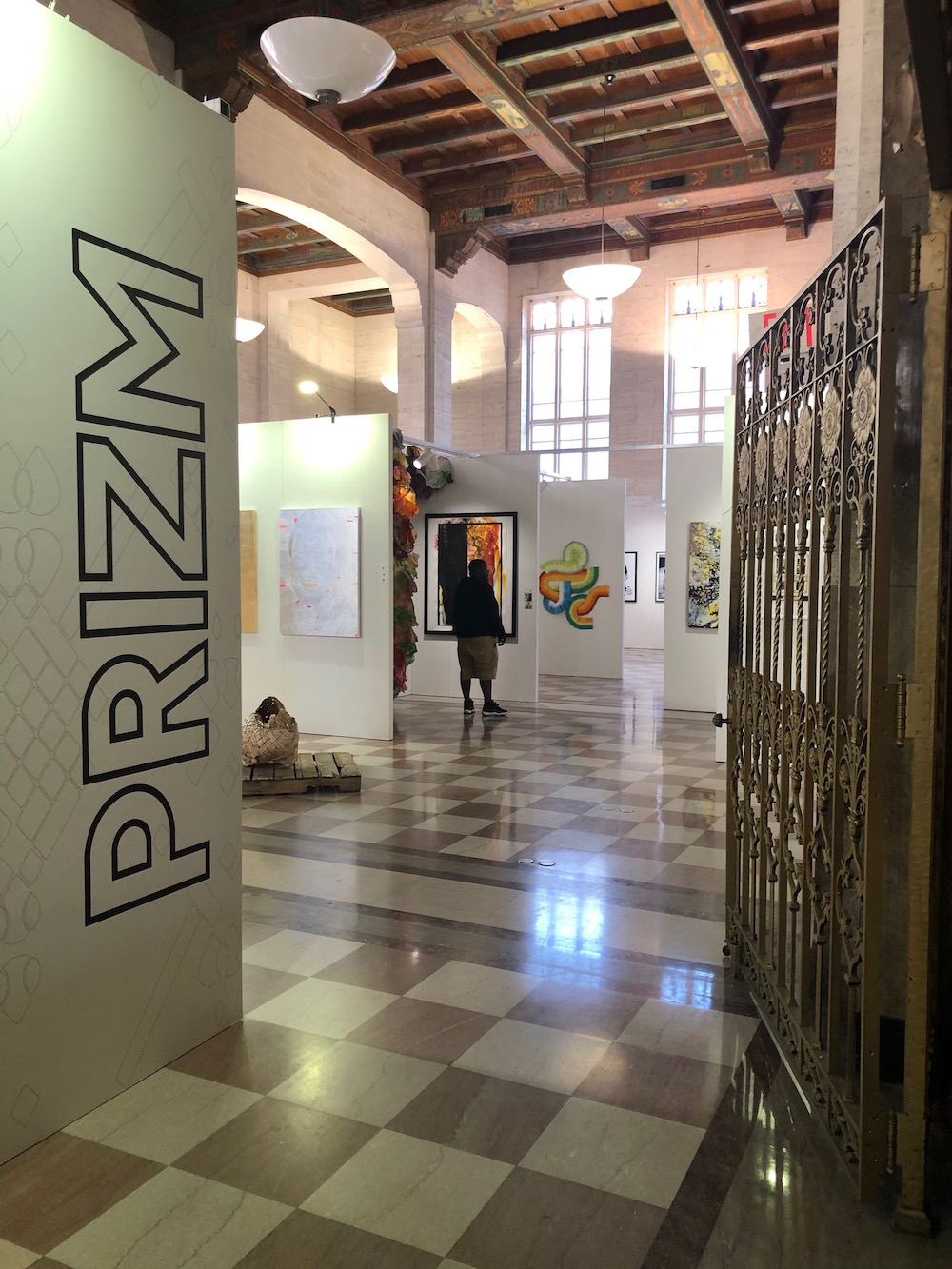 Entrance to Prizm art fair in the historic Alfred L. Dupont building in the design district of Miami 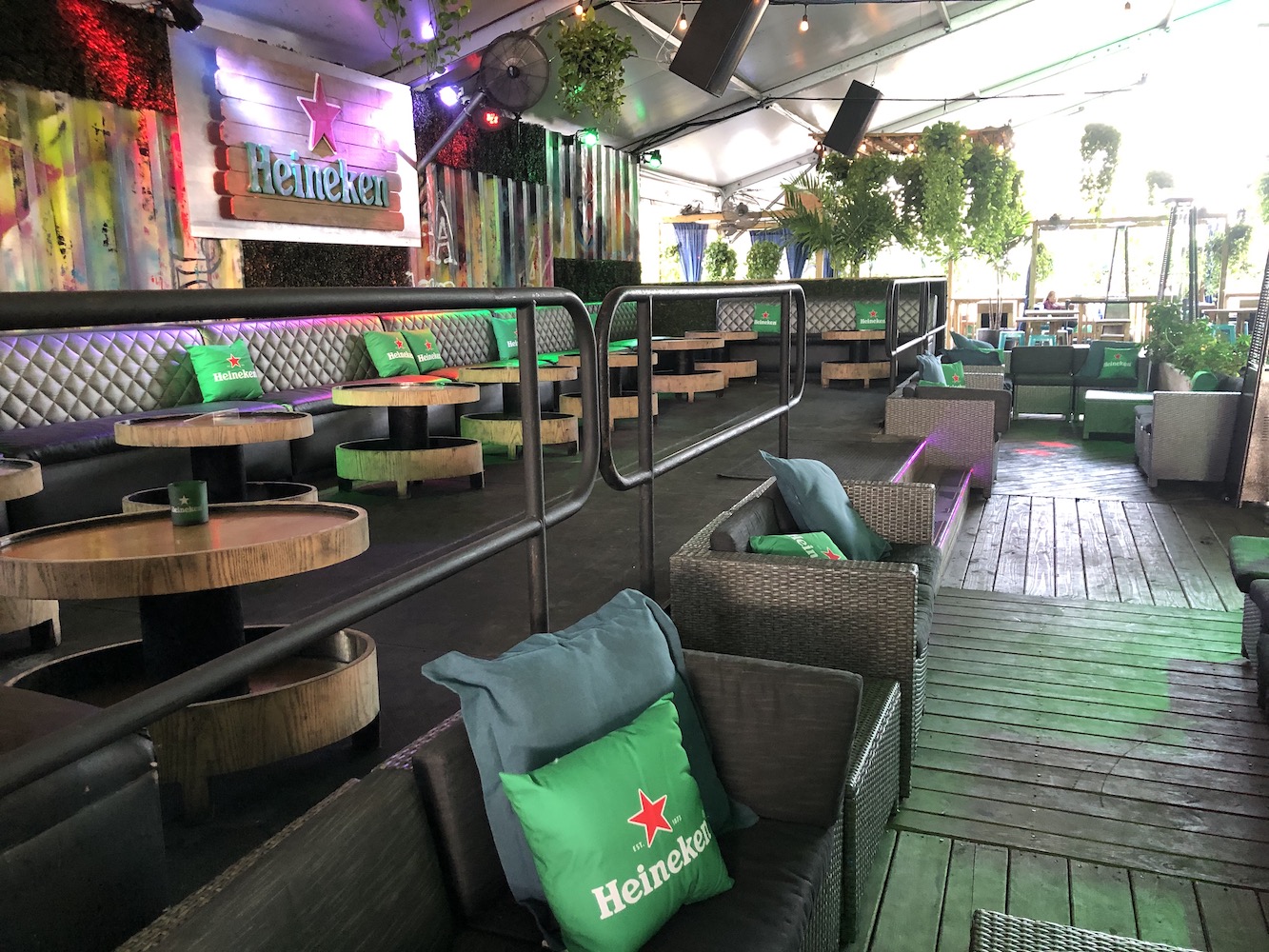 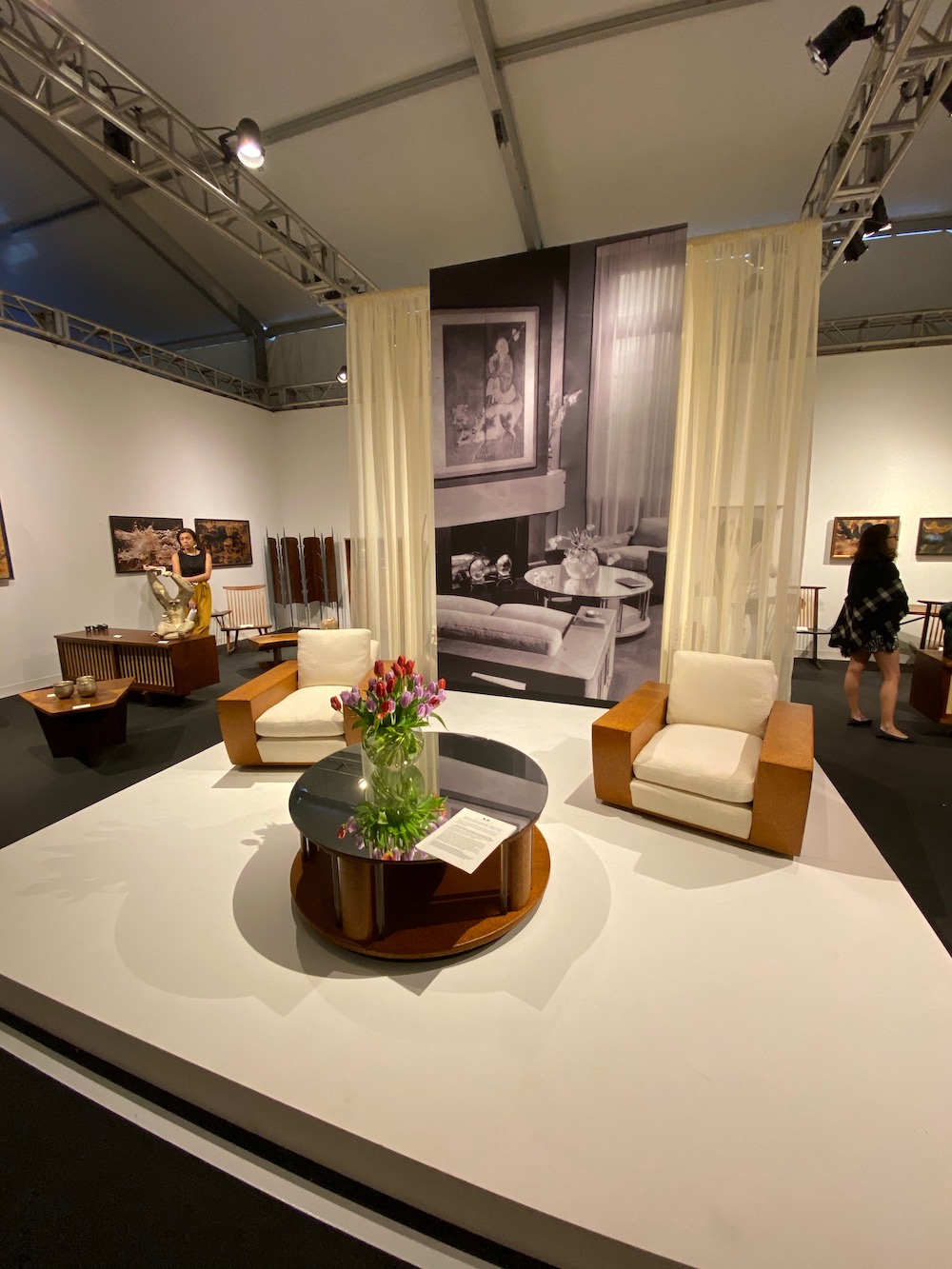 Moderne Gallery’s and Friedman Benda’s (featured image) booths at Design Miami/ are examples of the beautiful and transformational installations common at this fair. 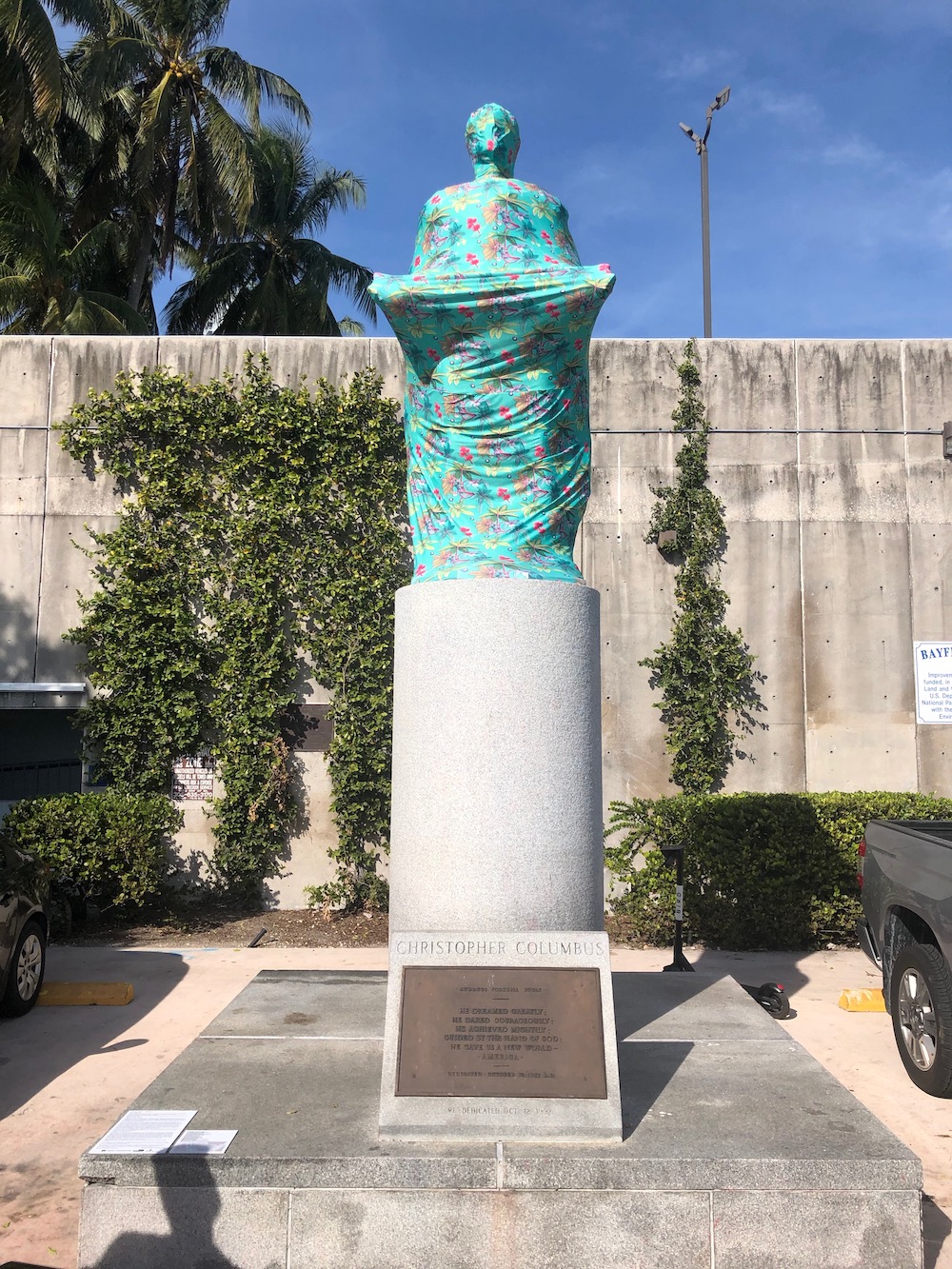 Joiri Minaya’s The Cloaking of Christopher Columbus behind the Bayfront Park Amphitheater in Miami, Florida, 2019 is part of the Fringe Project‘s temporary public art installations. 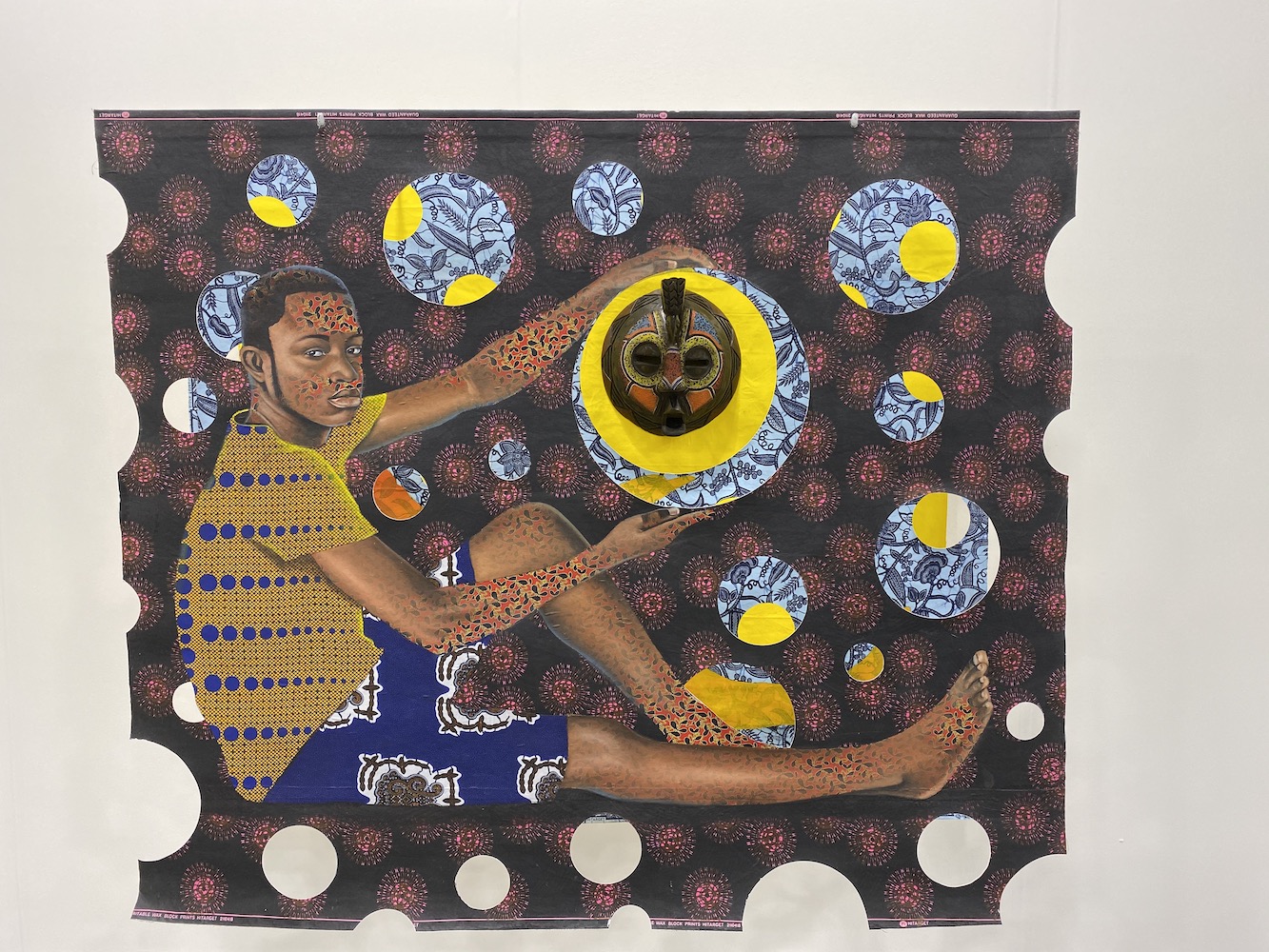 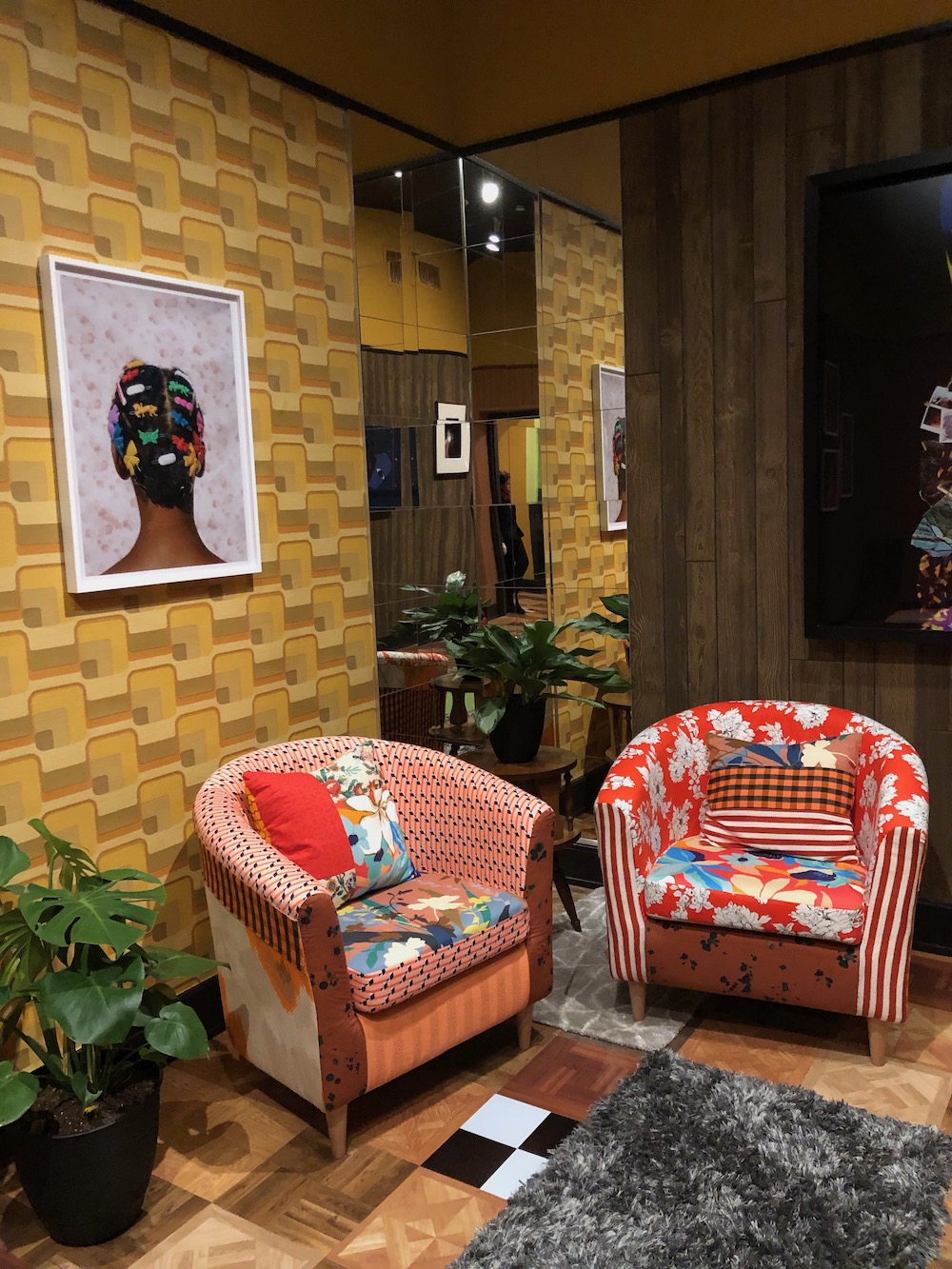 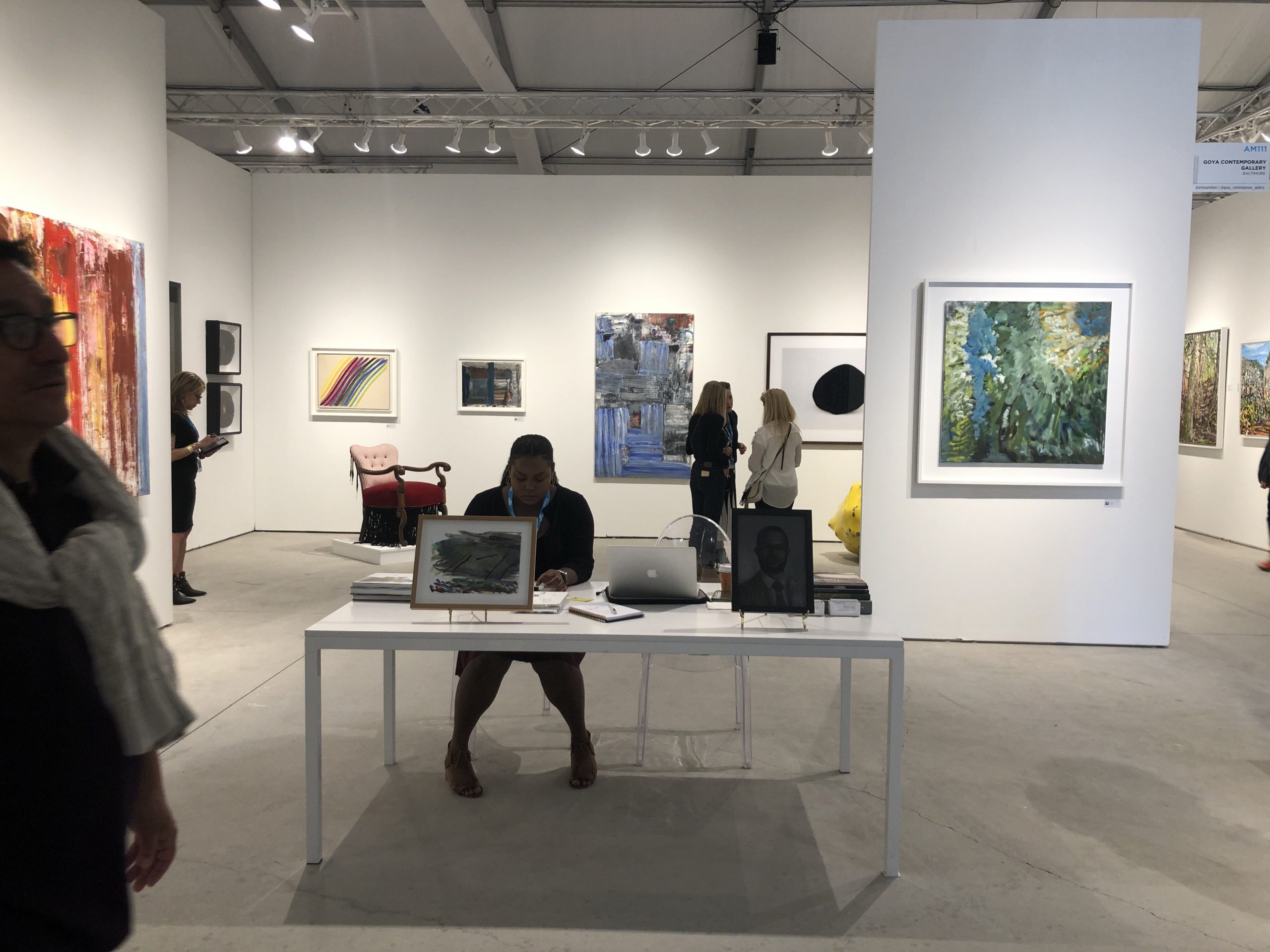 A view of Goya Contemporary’s booth at Art Miami 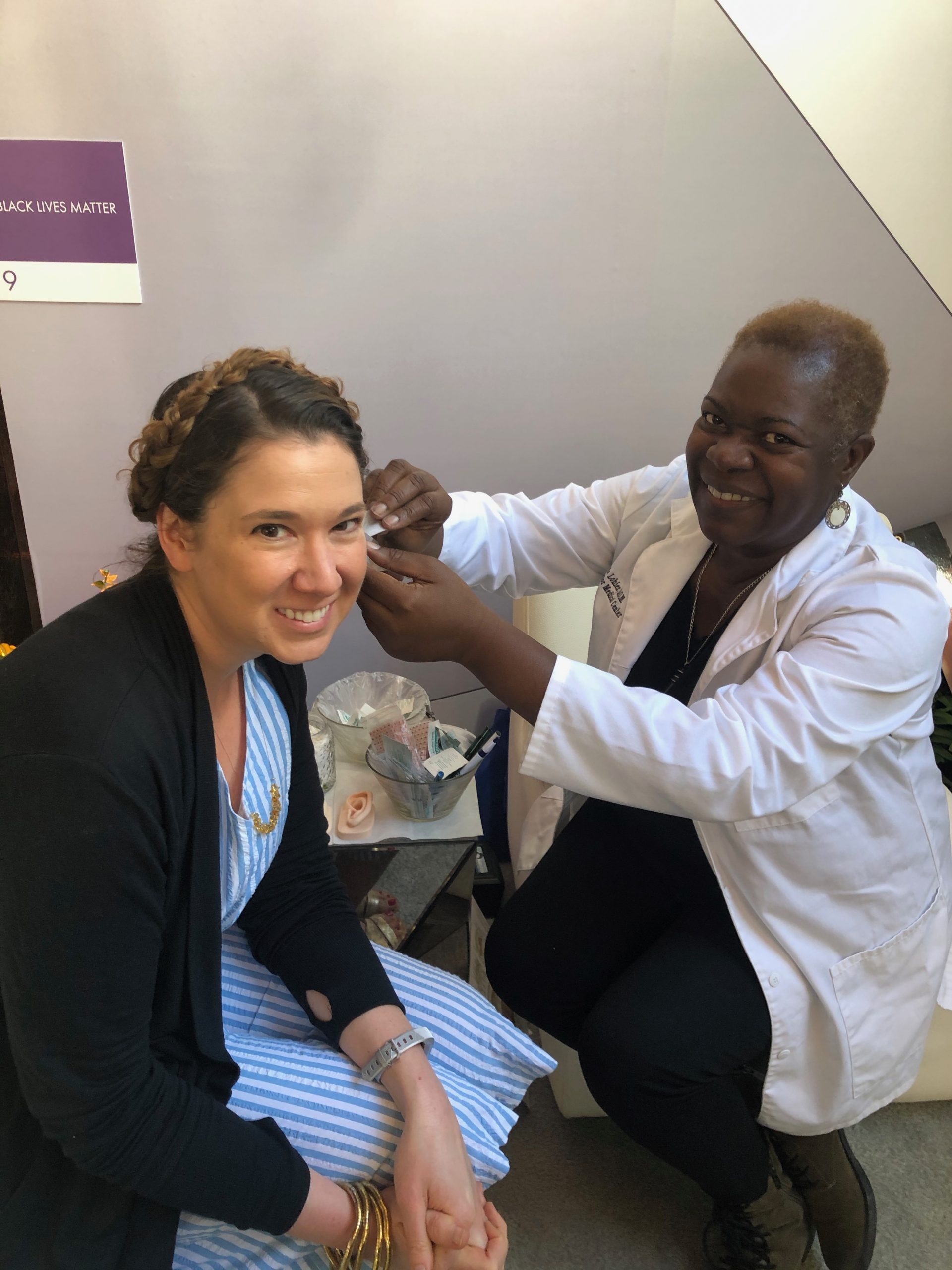 Suzy getting aquriculotherapy (ear acupuncture) from Rhoda Lohier, AP CME at the Black Lives Matter booth at Prizm. This is the second year BLM has been part of Prizm and offered free healing services to all fair attendees for stress and anxiety. 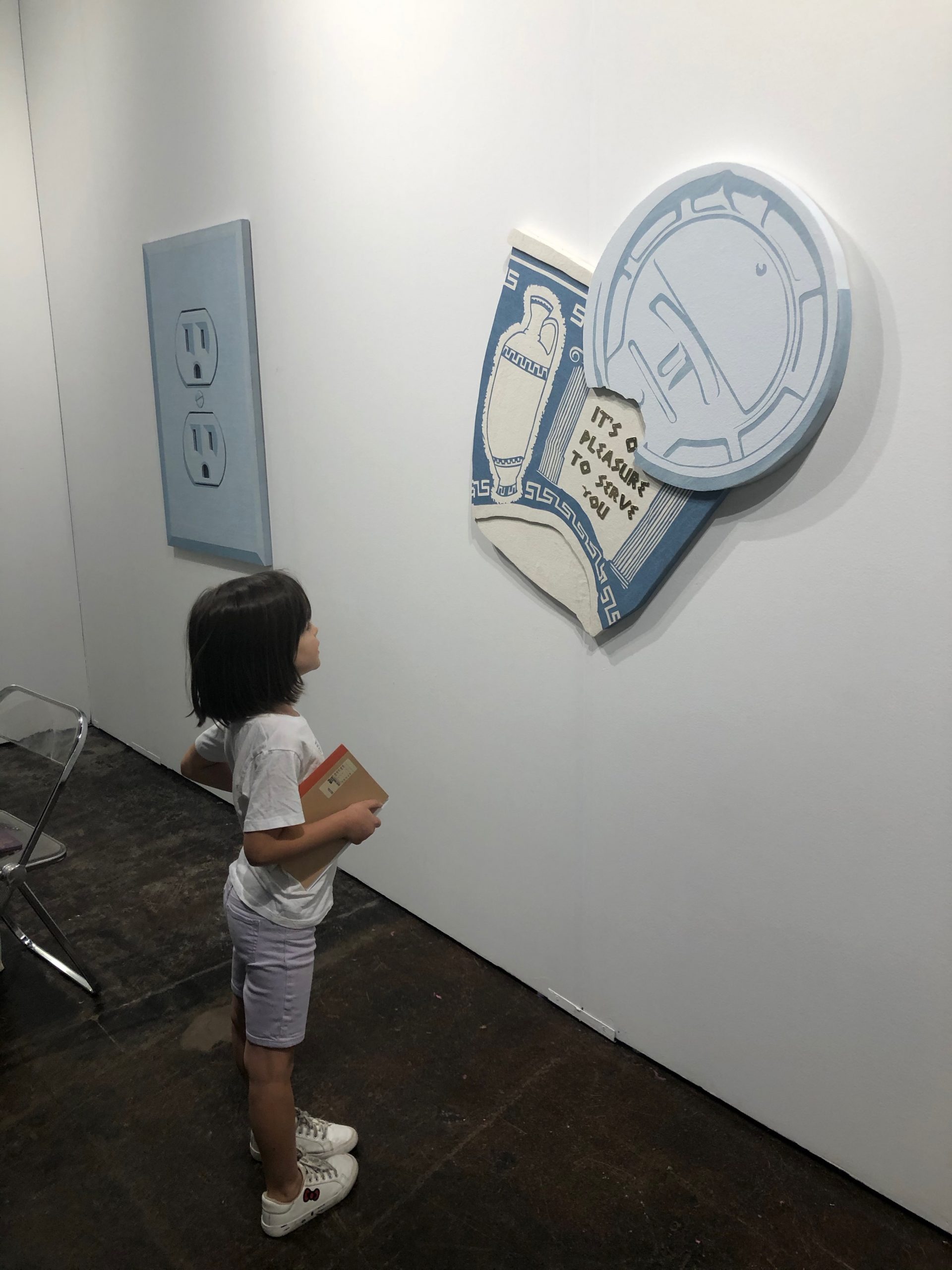