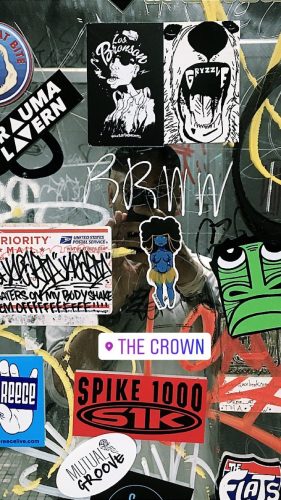 A Love Letter to The Crown 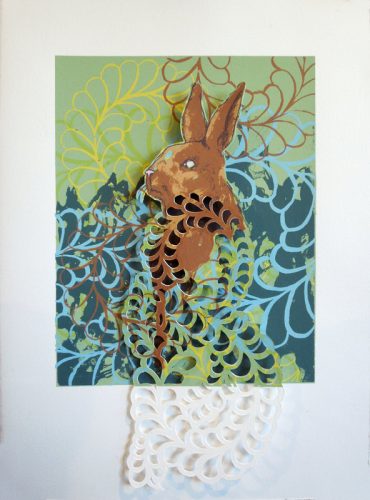 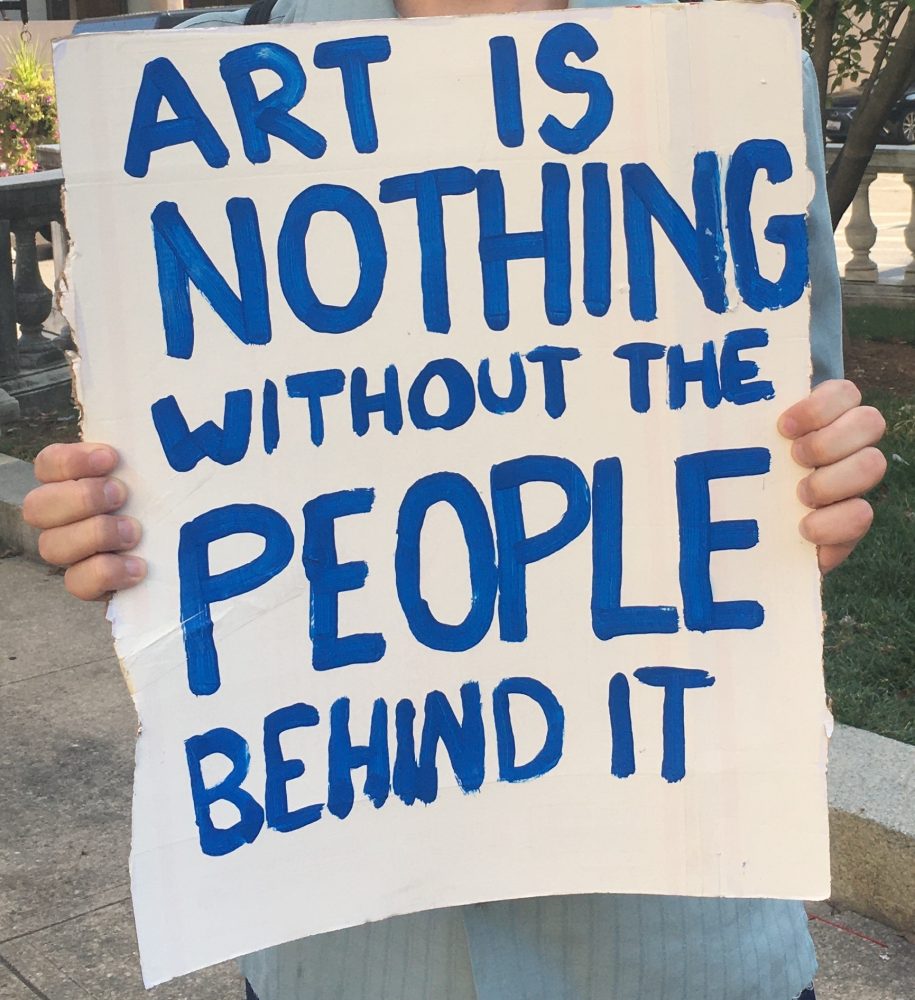 About a hundred people stood masked and sweaty, yet energized, at the August 12 evening rally outside of the Walters Art Museum. “We wouldn’t be out here if we didn’t have a really good reason,” said Elizabeth Norman in a rally speech. Norman is an organizing committee member of Walters Workers United, which wants to create a wall-to-wall union for the museum’s operational staff. “And that reason is because the workers at the Walters right now are overworked, understaffed, and we are ready for a change.”

Museum workers want Walters leadership to recognize their union voluntarily, or at least meet with representatives to “proceed with a fair and inclusive process for union recognition,” according to a WWU press release. In a July 29 letter to WWU, museum director Julia Marciari-Alexander denied a meeting request, writing, “We feel a meeting is unnecessary at this time given that positions have not changed since we received the first letter from Walters Workers United (WWU) several months ago.”

In April, workers announced their intent to unionize with the American Federation of State, County and Municipal Employees Council 67 as part of the Cultural Workers United campaign. They’re aiming to form a wall-to-wall union to negotiate pay equity, better communication and transparency, advancement opportunities, and safe work conditions for all union-eligible employees in all departments.

In a June 3 director’s statement posted to the Walters’ website and signed by Marciari-Alexander, Guy E. Flynn, and James H. DeGraffenreidt, Jr., the museum’s Board of Trustees president and chair, respectively, leadership argues it supports workers’ right “to choose whether to unionize” through a confidential vote organized by the National Labor Relations Board.

“I have likewise been clear with the museum’s staff that I am committed to ensuring this is not an adversarial process and that management will not take steps to influence the outcome of a vote,” Marciari-Alexander wrote. To address why she won’t voluntarily recognize the union, she wrote, “as Executive Director, I have a responsibility to act on behalf of all of the museum’s employees, some of whom may want a union and some of whom may not. For me to recognize the union voluntarily would require me to side with one group of employees over another.”

An NLRB election would require a simple majority vote—50 percent plus 1—for the union to be recognized. WWU organizers emphasized they already have “supermajority” support among the approximately 100 union-eligible employees, and they have collected signed union-authorization cards to prove it. The WWU doesn’t want to unionize through the NLRB because doing so would exclude gallery officers—who are technically security guards, an occupation that is specifically excluded from the right to join a bargaining unit according to Section 9(b)(3) of the National Labor Relations Act.

In August 2020, the Philadelphia Museum of Art voted to unionize through an NLRB election, becoming one of the biggest unionized museum workforces in the US, and the first major US museum to secure a wall-to-wall union. (This union contract excludes security workers, who unionized in 2009.)

According to AFSCME, the WWU does have options other than an NLRB vote or voluntary recognition from museum leadership. It can get a third party, mutually agreed upon by museum staff and leadership, to verify that the union cards are authentic. It can also run an election through another third-party organization, such as the American Arbitration Association. WWU organizers are open to these other options, and on July 25, the group sent a letter to museum leadership asking to move forward, but the director denied the meeting request on July 29.

Allison Gulick, the Walters’ learning and community engagement coordinator, said that the union is also “working on amending city code” which will be addressed at an upcoming city council hearing.

According to the present city code, some employees at specific institutions that receive city funds (the Enoch Pratt Free Library system, Baltimore Museum of Art, former Peale Museum, Baltimore City Public School System, and the Board of Trustees of the Community College of Baltimore) can be specially classified as municipal employees, if the institution’s governing body agrees. This classification by extension gives these employees a pathway “to negotiate collectively through representatives of their own choosing on terms and conditions of employment.” (Presently, workers at neither the BMA nor the Walters have collective bargaining rights.)

In a statement to BmoreArt after last week’s rally, museum leadership reiterated that “The Walters’ decision not to voluntarily recognize the union is . . . about every employee having the right to have their voice heard through a formal vote. The Walters is not opposing or interfering with our employees’ decision to consider forming a union or participating in the formal process of voting on that question. Moreover, if the outcome of these votes are in favor, we will negotiate in good faith and with expediency with the union, be that one unit or two. But let’s be very clear: this is not about the question of a mixed-guard unit, this is about the principle that the right to vote on this issue is essential and any other process would deprive eligible employees of their right to vote.”

Regarding the independent third-party option, the museum stated, “we do not believe that such an option exists. The National Labor Relations Board has jurisdiction over the Walters Art Museum on this issue, and for that reason any vote would have to go through the NLRB process.”

One job should be enough for a living wage.

The Walters organizers have spent the summer rousing support for their cause, calling on the community to share their opinions with museum leadership and to sign a letter of support. Several artists and museumgoers submitted statements that WWU posted on Instagram. Artist and musician April Camlin said she supports the union because “all workers deserve agency and respect,” and added that she has a “strong relationship” to the Walters because she has visited since childhood, and has exhibited, performed, and taught there.

“Supporting the people who care so deeply for and take care of the Walters is a no brainer,” wrote filmmaker Brandy Creek. “It’s time to show up 100% for the folks who show up 100% every day for one of the jewels in Baltimore’s crown.”

Lead maintenance technician Will Murray has worked at the Walters for 23 years. When he spoke at the Thursday rally, he said aside from annual 2 percent cost-of-living salary raises, his last individual raise came in 2003 when he was promoted to his current position. Before the pandemic, Murray made ends meet by working overtime each pay period. During the pandemic, workers were still getting paid, but there was no overtime, which was when he realized he wasn’t making enough with his base pay. “One job should be enough for a living wage,” he said.

Iman Cuffie works in the learning and community engagement department, which is responsible for a large part of the museum’s public-facing programs. During the pandemic, the department went from a staff of 15 people to four. “We can’t run the programs that the museum makes grant funding off of with four people,” Cuffie said, adding that with those personnel losses, “the glass ceilings that disproportionately affect a lot of my African-American coworkers [remain]. And a lot of staff are not given opportunities to rise higher than the positions that they start in, which are entry-level and terribly paid.”

Walters’ learning and community engagement coordinator Gulick said some of her coworkers have been “terminated without cause,” noting that “the work doesn’t go away . . . It’s divided among those of us that are left. Nobody gets a pay increase. It’s also passed onto our part-time workers who don’t receive benefits and are limited to very few hours per week, and that really affects what we are able to provide the community.”

On June 16 the Walters closed for three weeks due to a chemical exposure coming from the installation of new roofing materials and the use of a sealant to prevent leaks. According to an AFSCME press release, workers reported “headaches, nausea, dizziness and other respiratory issues” as a result of the organic vapors. Staff were sent home and the museum closed to the public and employees for a week, but gallery officers remained at their posts, and, according to AFSCME, these workers were “sent home only after they reported feeling sick.” A week after union-eligible staff wrote to management asking for information about the chemical and for protection from further exposure, they were sent safety data sheets, and the museum closure was extended.

In an email to BmoreArt, a Walters spokesperson replied: “The Walters Art Museum believes its actions have shown that the safety of its employees and patrons is of the utmost concern to the Museum. At some point after the contractor began the roof work on the Centre Street building, a number of people reported an odor inside the building. Out of an abundance of caution, we decided to close the museum while that work was completed. After ensuring the safety of our employees, we re-opened to staff on July 6, and to the public on July 7.”

The Walters confirmed that it is represented by Shawe Rosenthal LLP, the law firm it has used for ten years on labor issues and which, according to the self-described “management’s workplace lawyers” website, represents “both union-free and unionized companies in traditional labor law matters under the National Labor Relations Act.” For already-unionized clients, Shawe Rosenthal helps with collective bargaining, advises on the administration of labor contracts, and acts as “management’s advocates in arbitration and court proceedings.” The firm also boasts its handling of thousands of NLRB elections to ensure that union-free clients “[prevail] against efforts to unionize their workforces.”

Many union supporters call that approach union-busting. “Our lawyers work for us, at our direction, and we have been very clear that we absolutely respect our staff’s right to consider a union and to petition the NLRB to have a vote,” the Walters spokesperson wrote in the email to BmoreArt.

Throughout the rush-hour rally’s duration, cars—and an off-duty MTA bus—honked while passing. After the speakers, the crowd marched in a short circle around Mount Vernon Place’s south square, passing the museum’s east entrance. The crowd shut down Charles Street’s west-side lane for a few minutes, but a lone Acura slowly rolled through, seemingly by accident. Little kids in the backseat quietly chanted along with the marchers, “the people united will never be defeated.”

This article has been updated to clarify the groups included in the Philadelphia Museum of Art’s union and to clarify certain employee rights.

Photos by Rebekah Kirkman for BmoreArt