Looking Back While Facing Forward: Laurie Anderson at the Hirshhorn 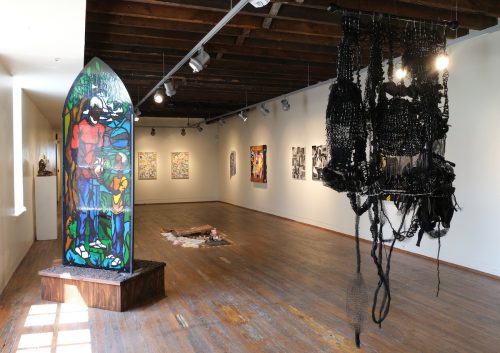 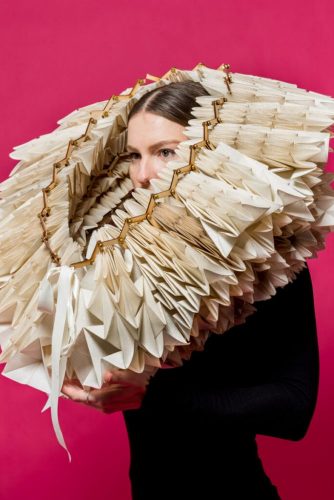 Visual Art
Looking Back While Facing Forward: Laurie Anderson at the Hirshhorn
"Laurie Anderson: The Weather" presents more than fifty works from across a renowned career 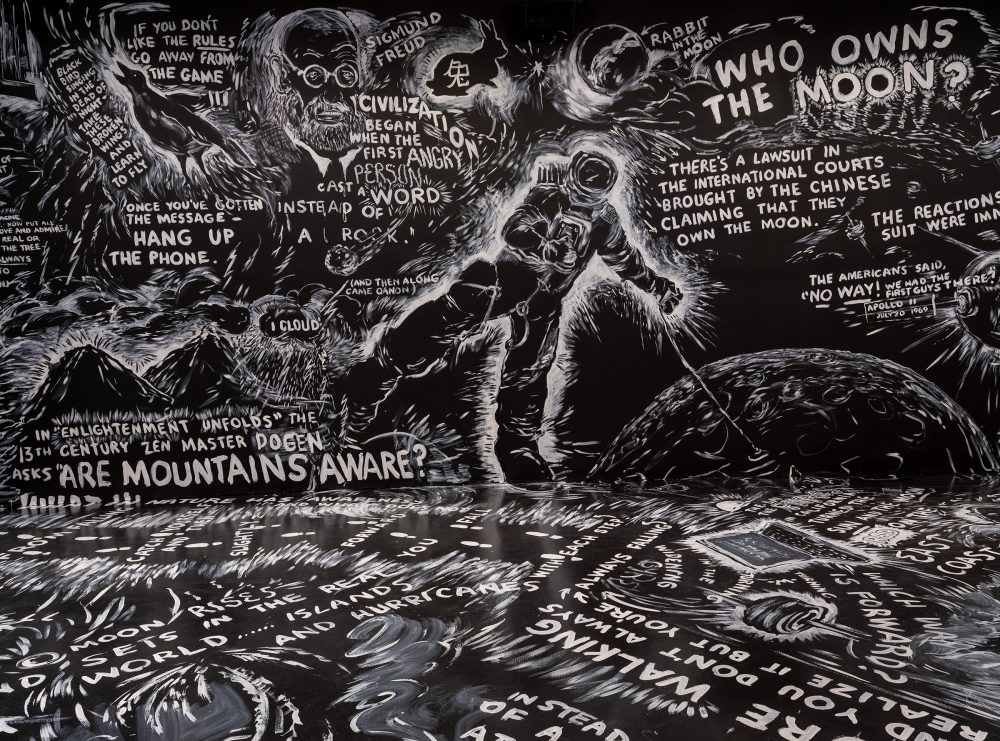 When Laurie Anderson was asked, at the media preview for her recently opened exhibition at the Hirshhorn, how it felt to see more than fifty works from across her renowned career gathered in a single place, she paused, and then offered a characteristically disarming response. “You think you have a brand-new idea,” she said, and seemed to smile behind her mask. “And then you think, I had that idea forty years ago.”

Well, perhaps—for, indeed, there are some repeating motifs and throughlines in Laurie Anderson: The Weather (through July 31, 2022). But there’s also a restless and agile inventiveness on display. Anderson is most widely known for her ambitious performance work, in which she typically combines music, storytelling, and technology in experimental and affecting ways. This show, the largest exhibition of her work ever staged in the U.S., certainly acknowledges those projects, and will include a series of live performances by Anderson. But it also foregrounds the considerable, and less frequently acknowledged, range of her artistic practice. Featuring sculptures, installations, videos, and photographs, and juxtaposing pieces from across her career with a host of recent works (including a suite of ambitious new paintings), it’s a dazzling display of what the art historian RoseLee Goldberg once called Anderson’s “powerful inventive drive.”

That drive is already apparent in the earliest works in the show: five photographs from the 1972-3 Institutional Dream Series. As a student, Anderson was fascinated by the creative possibilities of sleep; in an art history class, she sometimes slipped into a light sleep, in which the 19th-century imagery of the paintings on the screen merged with her own dreams. In these photos (taken by a collaborator), she took naps in public places—a courtroom, a ferry, a beach—and then reported, in accompanying captions, on the dreams she had onsite.

It’s at once an open experiment in mild transgression, vulnerability, and the creative process, and a clever riff on a range of artistic touchstones, from Vito Acconci’s urban aggressions to the passive, recumbent female figures of Fuseli and Millais. And in one especially potent image, the familiar amusement park rides of Coney Island hover above Anderson’s prone body as if they were nothing but an insubstantial dreamwork: the solid, as they say, melting into air.

That contrast between resolute form and an implicit insubstantiality also lies at the heart of the understated Windbook, from 1974 (and recreated here in a new iteration). A book of dreams, rendered in an indecipherable series of encoded lines of text, sits in a wooden box with all of the weight and gravitas of a religious codex. But wait—for two fans, installed at either end of the case, periodically blow towards the open pages of the book, ruffling them or occasionally turning them in quick sequence. Suddenly, the piece acquires a different aspect, implying a fugitive, random quality wholly appropriate to the realm of dreams.

From there, we’re led down a hall that eventually opens onto the confident and unsettling Salute, a 2021 installation work that fills the next gallery. Eight robotic arms brandish eight red flags, lifting them in precise patterns that are sometimes collective and sometimes individual. Once more, Anderson delights in opposites: the silken rustle of the fabric of the flags gives way to the percussive whack of the stiff rods as they hit the floor. But this work subtly invites, too, a more pointed political reading. One of the gallery walls bears lyrics from Anderson’s hit 1986 song “O Superman,” including these lines:

The dark, sardonic tone of the lyrics, with their hint of eroding faith in systems and values, infects the piece. A salute—but to what nation, principle, or dictator? And while the varied and random wrinkles of the flags as they come to rest may suggest a fragile, delicate individuality, they’re inevitably overwhelmed by the tireless, martial gestures of the mechanical collective.

Or, at least, they’re temporarily overwhelmed. For, several galleries later, the giddy Four Talks offers an irrepressible tribute to individual creativity—or to what Anderson terms “the push to make things, the urge to make something.” Working by herself over the course of two weeks, Anderson covered the white floor and walls of the gallery with a dizzying array of painted parables, aphorisms, and sketches. Broadly reminiscent of her 1996 installation at the Guggenheim Museum Soho, and including several passages drawn from previous performances, the space is characterized by vibrant density. Indeed, the four sculptures that share the space are nearly lost in a fervent chorus of words, allusions (to John Cage and Sigmund Freud, among others), and anecdotes.

Strikingly, though, Anderson has also been at work on a series of more conventional painted works: a new development about which she was discernibly nervous at the press preview. (“I’m very sheepish,” she said, “about saying I’m making paintings to my painting friends.”) She needn’t be, however, for the eight sizable oil paintings included in the show comfortably cohere. Pronouncedly gestural, they include loose, linear evocations of figures and architectural forms; in their scale, their provisional aspect, and their wraithlike outlines, they suggest Turner and De Kooning. At the same time, the palette, built around greens, reds, peaches, and oranges, evinces a Rococo lightness—and the gold grounds, according to Anderson, have their roots in the gilt backgrounds of medieval panel paintings. But these are not simple exercises in art historical citation. At the top of The House, a bold and impertinent splotch of blue offers a visual release: a raw sliver of sky in a hall of mirrors.

From there, the Hirshhorn’s circular gallery leads us to a devastating coupling of works that are typical of the clear-sighted but understated curatorial logic of Marina Isgro. In the corner of one gallery, a huge foam sculpture serves as the ground for a 35-minute video projection of Mohammed el Gharani. A teenager held for seven years at Guantanamo Bay, where he was repeatedly tortured, el Gharani was finally released in 2009; he now lives, stateless, in Ghana. In 2015, Anderson arranged for a live, remote conversation with him; here, he speaks in a recording, and his seemingly guileless recounting of his experiences is arresting in its casual immediacy.

And then, in the very next gallery, we find ourselves looking down at a tiny pair of clay figures, which serve as the ground for a video projection in which Anderson herself tells a story about her dog. It’s a compelling example of Anderson’s skill with scale, as the transition from the monumental image of the ex-prisoner to the toylike image of the artist yields a jarring effect and a delicate intimacy. But as she speaks, in restrained and measured tones, her story suddenly takes a distressing turn—and abruptly reframes the words of el Gharani in the previous room. There are many ways, it turns out, of telling the stories of innocent victims.

Finally, the last gallery offers a sort of summary and reprisal, as it includes a montage of brief excerpts from selected performances, a cluster of the novel instruments created by Anderson over the years, and a detailed summary of her major projects over the years (including, most recently, a post as a professor of poetry at Harvard and an opera-in-progress). Inevitably, of course, a single show can only do so much, and close observers of Anderson’s career may notice that her works from the 1990s are given relatively little attention here. Still, the effort at a summary is a fair one, and the placement of an interactive sound piece at the show’s end is a thoughtful gesture—for after all, as Anderson once claimed, “my work is always about communicating.”

But instead of leaving quite yet, let’s first circle back to What Time Can Do (Shaking Shelf), an understated installation that risks being lost in the accompanying swirls of text painted on the gallery walls. A modest shelf bears a collection of small wooden, plastic, and ceramic objects; below it, Anderson offers a touching story of a comparable shelf, whose precious contents were regularly threatened by the seismic passage of a passing train. Over time, the fragile originals were replaced with cheaper and more permanent pieces. Meanwhile, as we read, a recording of wheels and squeals grows more and more intense.

Will the house shake? Will the objects crash to the floor? It’s not immediately clear. But it does seem certain that whatever happens, the result will not be simple degradation. Anderson may feel that she keeps returning to ideas she had long in the past. But this show is vivid proof, too, of her sustained creative power, and of her ability to balance fragile forms with substantial concepts in new and rewarding ways.