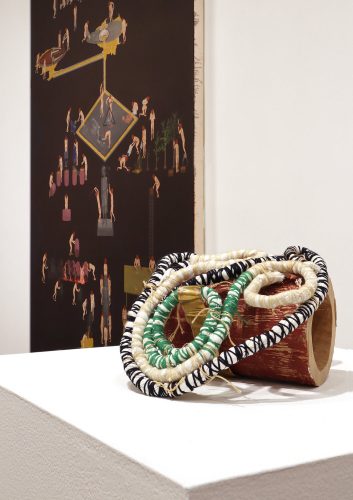 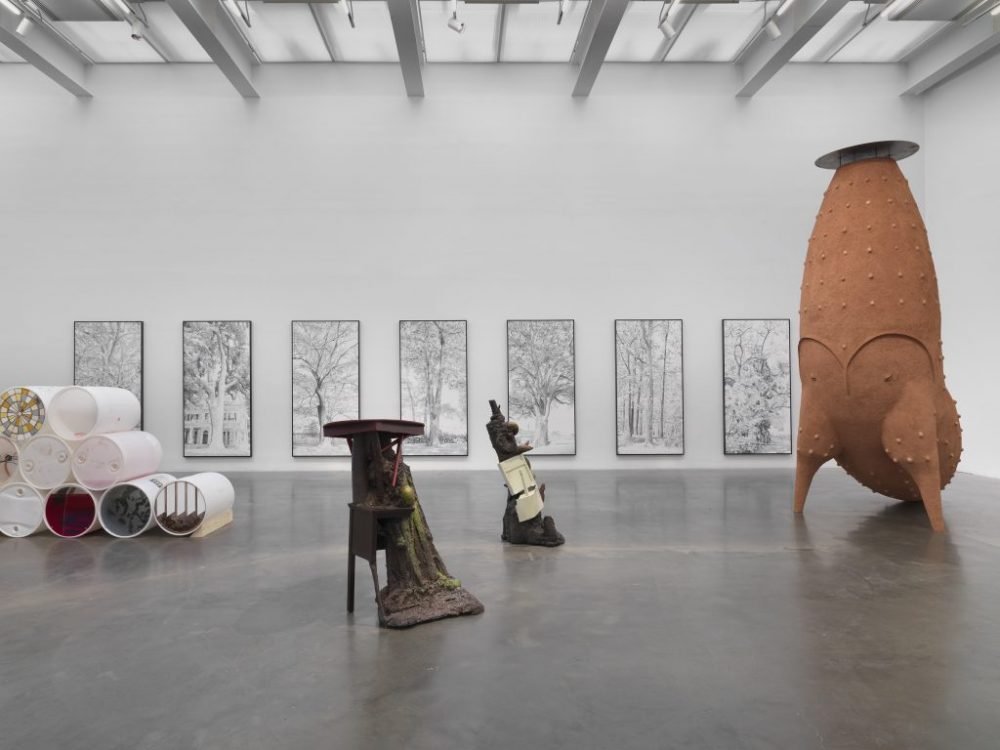 Flinty, weary, heavy: collectively, the dominant mood of the 2021 New Museum Triennial is distinctly sober. That’s understandable as many of the works (by 40 emerging artists and collectives from 23 countries) are products of a troubled, turbulent moment. Nevertheless, even as the show generally foregrounds the complex weight of history, a sense of embodied weariness, and a general existentialism, it’s lightened by several unexpected local grace notes. And central to its effect are works by two artists with strong Baltimore connections.

Begin on the fourth floor: as the elevator doors open, seven sizable canvases by Baltimore-based Cynthia Daignault stand before you. Painted gesturally, in a range of grays, they depict trees that witnessed Civil War battles and still live today, implicitly testifying to a lingering national trauma. But Daignault is not suggesting mere continuity here. Six of the paintings also include houses or fences, referencing an ongoing process of maintenance, framing, and reframing. In turn, emphatic black frames surrounding the paintings intensify the senses of mediation and rhetorical distance.

If you get close enough, the painted forms begin to dissolve into purely abstract mark making, generating an ethereal effect. In that sense, it’s worth pointing out that the structure of Daignault’s series softly echoes Robert Rauschenberg’s seven-panel White Painting, a monument in the history of abstract painting. Despite the presumable solidity of the massive trees that are their subjects, these are also clever evocations of the abstract nature of history and of the ghostly insubstantiality of memory. The past may be too much with us, as they say—but it cannot be simply grasped.

Viewed thus, Daignault’s suite of paintings acts as a potent exploration of one of the show’s primary themes. “History is a nightmare,” Stephen Dedalus famously declared, “from which I am trying to awake.” And several of the artists also tend to complex historical legacies. In an understated but affecting piece, Kang Seung Lee offers a delicate veil made from natural objects derived from sites that are associated with three pioneering gay rights activists (Harvey Milk, Derek Jarman, and Oh Joon-soo). Part shroud, part elegy, it’s a quiet, affecting object, and its respectful tone is extended in a video in which Tanya Lukin Linklater gently handles indigenous objects now held in museum collections. How to relate to the targets of a history of violence and marginalization? Tenderly, these artists propose, with a hushed reverence.

In the background, though, we can hear an ominous, percussive thud emanating from the Brazilian artist Gabriela Mureb’s Machine #4, in which an engine-driven rod regularly rams against a stone, momentarily jarring it. Here, the raw, mechanical force operates as an open-ended metaphor for the various pressures and harsh circumstances that can destabilize any of us. Nearby, a second work by Mureb features two engine-driven rotors. When a motion sensor is activated, they spin a belt in a loud, rapid, and senseless frenzy. In formal terms, the piece recalls an endless treadmill; thematically, it evokes the caffeinated mania of 24/7 culture. If we are still, though, the machine soon comes to a rest: a temporary calm contingent upon our own restraint.

In alluding to bodies under pressure while jettisoning conventional figural strategies, Mureb’s work is typical of a general tendency in this largely abstract show. Krista Clark’s concise assemblages of industrial materials such as concrete and fiberglass rely upon tensions between opposites—soft and hard; angled and rolled—and convey a Foucauldian sense of vulnerable identity in a repressive environment. Meanwhile, pools of small, colorful beads occupy interstices throughout the museum. Totaling, cumulatively, the body weight of the Vuntut Gwitchin artist Jeneen Frei Njootli, they hint at an indigenous presence that is both fugitive and fragmented, scattered but unifying. The body, in such works, is too overdetermined to be simply represented, but it is nevertheless implicitly present.

That idea is also partly responsible for the power of another local climax in the show: ten tabletop sculptures by Kahlil Robert Irving, who teaches ceramics at MICA. A rising star in the art world (another of his works is currently on display at the Whitney), Irving produces dense combinations of post-industrial objects, aborted ridges and flares, bright enamels and lusters, and decals derived from mass media and screen culture. The knotty resulting objects reward close inspection of their varied surfaces—but also gesture towards the precariousness of individuality in an oppressive and calcified world.

Does that sound overblown? Perhaps—but the emphatically intricate title of Irving’s series (Routes&Roots[(SaintLouis«NewYork (returnflight)]MEMORY MASSES) seems to insist upon a notion of meaning that is generated through layering and accretion. Rather like underwater reefs, his works feel like products of ponderous, random forces; like mottled granite, they are the residues of violent moments (a headline announcing the assassination of JFK appears, in one, near a small text reading “whites only”). And yet, there are occasional moments of grace, as sparkling, glittering surfaces shine and seem to glow. If history can feel geological in Irving’s hands, it also features brilliant moments.

The rest of the show plays out in a similar key for the most part. Deftly curated by Margot Norton and Jamillah James (who also has Baltimore connections), it’s exquisitely balanced in terms of media and geographical coverage. Again and again, though, heaviness and exhaustion emerge as themes. Yu Ji’s fragmented, slumped concrete figures seem incapable of autonomous action, while the foraged, repurposed light fixtures used by Iris Touliatou flicker weakly and die out. Even Hera Büyüktaşçiyan’s impishly arranged piles of industrial carpet, which feel almost musical in their bright variations, depend upon the simple fact of gravity as they curl and sag.

None of this should surprise, given that most of this work was produced in the midst of a global pandemic. Indeed, the accompanying rhetoric emphasizes the dire situation at hand: in the curatorial statement, we read that “structures once thought to be stable are disintegrating or on the edge of collapse.” Strikingly, though, the show’s title, Soft Water Hard Stone, was selected for its inspirational, rather than apocalyptic, implications. Derived from a Brazilian proverb that accents water’s ability to wear down the hardest of materials, it can be seen as embodying the themes of perseverance and resistance. Or, as the wall text accompanying Mureb’s Machine #4 puts it, “over time, the rod will eventually bore a hole in the stone.”

Perhaps—but perhaps not. For when I was there, the show’s carpenter suddenly strode up to Mureb’s machine and gently moved the rock, which had moved slightly away from the rod, back into its original position. How often does that have to be done? A few times a day, I was told; “it depends on its mood.”

The subtle intervention and humanizing language felt far from the assertiveness of the wall text, but close in spirit to the tender gestures occasionally visible elsewhere in the show. Mureb’s spinning rotors pause and rest; Lee and Linklater practice deliberate intergenerational care; facets in Irving’s objects glimmer. Sure, water can erode stone, Civil War-era trees are now endangered, and we all know how it feels to be worn down. But in admittedly difficult moments, even a subtle light or a single restorative moment can be a powerful salve.