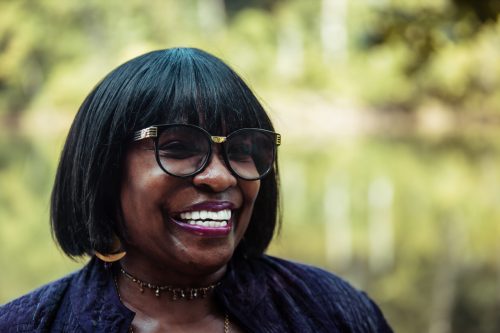 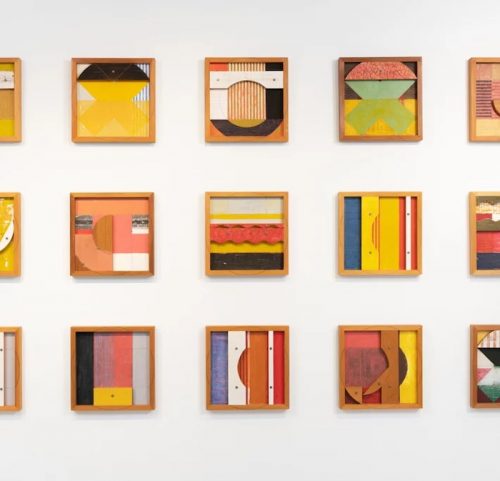 Visual Art , Issue 12: More is More
SEE ME: Murjoni Merriweather Personalizes the Portrait Bust Tradition
“I wanted to create a space for Black people to feel surrounded by ancestors, surrounded by love.” 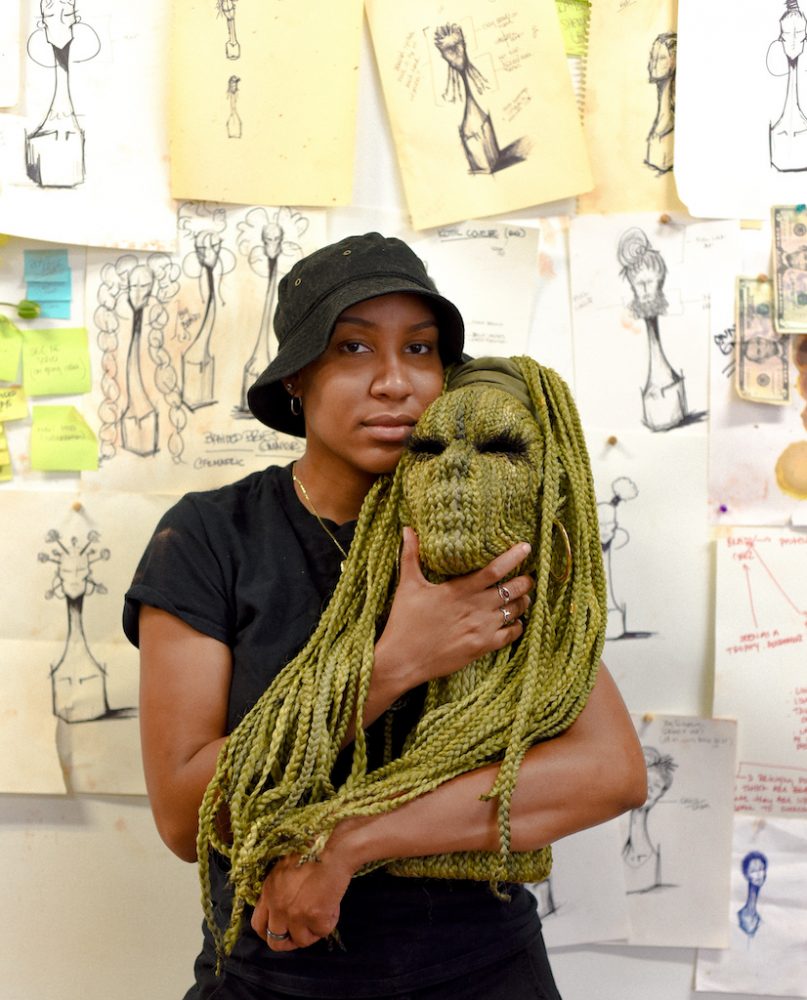 On a recent visit to Murjoni Merriweather’s home and studio at Creative Alliance, the artist enthusiastically showed me a shelving unit full of ceramic busts in various hues and finishes, embellished with gold teeth, kanekalon braids, giant hoop earrings, and faux eyelashes. These details are a specific infusion of Black hair culture into the Baltimore native’s sculptural practice which is now being nationally recognized, especially after exhibiting at Jeffrey Deitch in Los Angeles in March 2021.

Merriweather was warm and hospitable, and our visit was infused with a frenetic energy because she was readying herself (and her cat) to leave for Miami the following day for the prestigious Fountainhead Residency. The one-month residency is free and allows artists to fully immerse themselves in their work. Inclusion is by invitation only, and alumni include Shikeith, Deborah Roberts, Abigail DeVille, and Sable Elyse Smith, an impressive roster that bolsters Merriweather’s status as an artist to watch in the contemporary art world.

Merriweather has been sculpting lifesize clay busts for a decade, personalizing the historic tradition that goes back to the Ancient Greeks and Romans, as well as the Egyptians, and the Kingdoms of Benin and Ife. Historically, portrait busts were made of aristocrats and political leaders in marble or bronze, but Merriweather remixes the convention using terracotta clay. With high cheekbones, long necks, prominent lips, and shaved heads, Merriweather’s busts boast exaggerated features that often resemble her own likeness, as well as her friends and family. The artist’s impetus for creation has always been the representation and inclusion of Blackness within the art historical canon, a desire formed after growing up visiting museums and galleries full of European sculpture, where the few Black individuals depicted were either enslaved or had Eurocentric features.

Similar to Kehinde Wiley, Tschabalala Shelf, and Amy Sherald (formerly a Creative Alliance resident artist herself), Merriweather’s work offers a loving correction to art history and a bold statement about Black beauty. Her goal is to challenge aesthetic standards codified over thousands of years and to allow Black audiences to feel included in gallery exhibits and museum collections, creating a more expansive art history of the future.

At just 25 years old, Merriweather is seriously accomplished. The Eubie Blake Cultural Center hosted her first solo exhibit, SHININ’, curated by Thomas James in August 2021. “I wanted to create a space for Black people to feel surrounded by ancestors, surrounded by love,” Merriweather says. “I want to make work that looks like us. I want to make something that makes me feel loved and cared for. I think it’s also a reminder to love myself a little more.” The show’s glittering, incandescent, and multi-colored busts were displayed on pedestals throughout a dimly lit gallery painted black, with spotlights on each of the ten new sculptures. Reminiscent of African busts or Ancient Egyptian portrait sculpture, her works revealed my ancestors, and I saw myself, shinin’, reflected in her creative practice.

Meriweather uses her work to create spaces of joy and reverence, self-acceptance and self-love, contemplation and introspection. The exhibit’s title, SHININ’, offers a dual meaning. It refers to the reflective material that adorns and illuminates each of the clay busts as they shine under gallery spotlights, but it also refers to the physical embodiment of her message, that Black people are glittering stars.

The sculptures at Eubie Blake were displayed above eye level to ensure the viewers’ physical action—a literal elevation of Black portraits through her work. “I don’t want people to ever look down on my pieces,” she explains. “I want people to be at eye level or look up to them.” Every move in Merriweather’s process is intentional, especially when it comes to the works’ titles. The artist uses letters that are capitalized and spaced out, like S O S A, 2020, with a cobalt blue afro-hawk and silver hoops, or Q U E E N I E, 2020, adorned with a crown of burgundy braids. “It has to be capitalized because I want the name to take up space,” she says. “Take the time to read this muthafuckin’ name! You gon’ know this name!”

Encouraged by her mother, Merriweather began making art at an early age. “I don’t think my mom thought I would take it as seriously as I did,” she says. “She saw that I just liked to draw, she gave me the tools for it, and I figured it out from there. Did she expect me to become a full-time artist? No! [laughs] This is my mom’s fault!” In the eighth grade, Merriweather took her first ceramics class but she hated wheel throwing. She explained this to her teacher, who taught her how to hand build, a method she has used ever since, including her collegiate study at MICA, where she earned a BFA in 2018.

The creation of each sculpture is labor-intensive and takes at least a month to complete, with certain sculptures requiring three separate firings in the kiln. But Merriweather says that she doesn’t notice the passage of time because she enjoys the process so much. After construction and firing, she embellishes the surface. Like the act of getting dressed to go to a party or to church, Merriweather hand-braids and dyes the hair, which she purchases from beauty supply shops in Baltimore. She adorns the busts with bamboo earrings, eyelashes, and gold chains, before naming and photographing them.

Merriweather is inspired by the inherent beauty of Black people, especially by the appearance of her friends and family. “I think our features are amazing. I think that our hair, our hair culture in general is amazing,” she says. “Just how we vibe, how we feel, how we look like, how we go about our days.”

She also is quick to point out the influence of her artist friends, many of whom are based in or have ties to Baltimore and who “are definitely pushing me hard as hell,” she says, identifying Amani Lewis and Jo Nanajian as some of her close friends, and Tyler Ballon, Charles Mason, Monica Ikegwu, Stephen Towns, Derrick Adams, Devin Allen, and Jerrell Gibbs as other major influences. “We’re not only artists that are doing our thing, we’re also very cool with each other. We always come back to Baltimore.”

For Black History Month 2021, Artsy launched a series of online group exhibitions highlighting the work of Black artists and curators, and Merriweather was a part of the show Textured Histories: From Weaving to Collage, curated by Adeola Gay. The exhibition featured the work of legends like Romare Bearden, Faith Ringgold, Lorna Simpson, and Wangechi Mutu, and examined how Black artists employ materiality and craft mediums to communicate fresh ideas by relying heavily on the use of texture and material.

In March, six of Merriweather’s sculptures were included in Shattered Glass, guest-curated by Melahn Frierson and AJ Girard at Jeffrey Deitch in Los Angeles. The exhibit was massive in scale and featured work by 40 international artists of color working in painting, sculpture, and film, including Lauren Halsey, Amani Lewis, and Kandis Williams. Centered around redefining the tradition of Western Figurative Art, the exhibition’s goal was to “shatter the glass” of racist power structures in the art world.

Other national recognition and opportunities have followed. Merriweather will exhibit new work at Art Basel Miami Beach with Jeffrey Deitch in December 2021. “I’ve been manifesting Art Basel for the past two years,” Merriweather says. The future looks busy and bright for Merriweather, who completed the Fountainhead Residency in September and returned to live and work at Baltimore’s Creative Alliance, where she’ll be in residence through July 2022.

Back in Merriweather’s studio, I paid particular attention to S E E M E, a sculpture from 2016. Devoid of iridescence, S E E M E contrasted with the glittery works that I’d seen in SHININ’. It’s bone black, deep onyx, and has a grinning mouth of shiny gold fronts and a head of dreds. The figure struck a note of familiarity with me, reminding me of home, of the South, and of Baltimore. 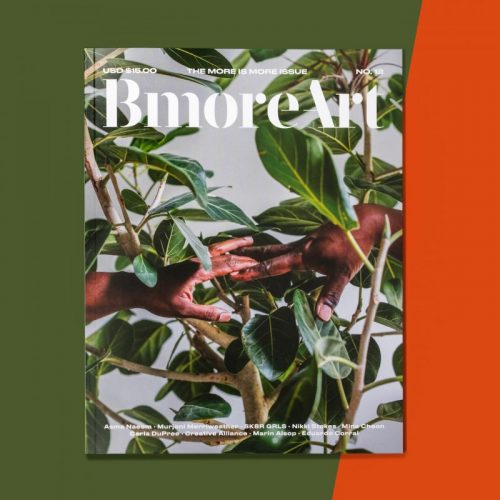