The Final Rotation: Sam Gilliam’s Full Circle at the Hirshhorn 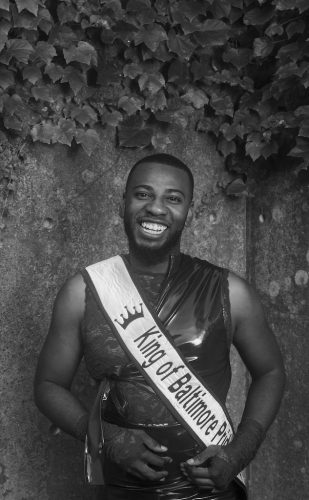 Visual Art
The Final Rotation: Sam Gilliam’s Full Circle at the Hirshhorn
Gilliam, who died on June 25, had an artistic practice dedicated to the interrogation of self and spirit 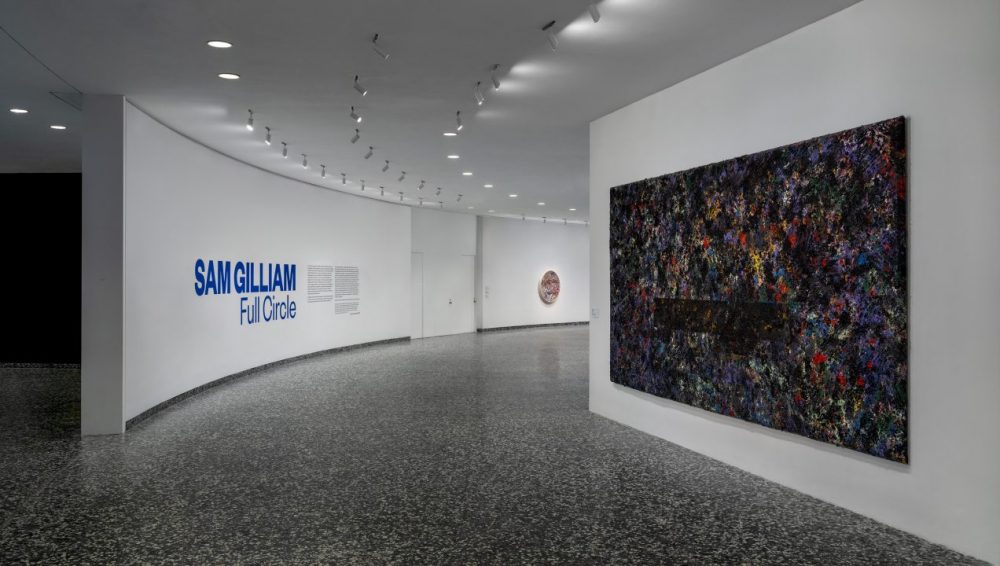 When you hear Full Circle in the same sentence as the seasoned and historically impactful abstractionist Sam Gilliam, a retrospective is probably the first thing that comes to mind. In the case of Gilliam’s latest exhibition, the name takes on several meanings. Of the 18 works on display, 17 are circular, bevel-edged canvases ranging from 3 to 5 feet in diameter. These structures, also known as tondos, mimic the shape of the Hirshhorn Museum and Sculpture Garden gallery where they hang. And poignantly, this exhibition marks the end of the artist’s life and active contribution to the canon. Just a month after Full Circle’s opening, Gilliam passed away at the age of 88.

Situated in the museum’s inner rotunda and conceived by lead curator Evelyn Hankins, Full Circle is something of a homecoming for Gilliam, who hasn’t exhibited in Washington, DC, since 2007. Much like the artist’s enduring body of work, the heart of Full Circle is found in its layers. Consisting of pieces primarily produced between 2020 and 2021, the exhibition begins with a nod to a style Gilliam began experimenting with in the late ‘60s that sets the stage and balances the scene.

Poignantly, this exhibition marks the end of the artist’s life and active contribution to the canon. Just a month after Full Circle’s opening, Gilliam passed away at the age of 88.

The painting Rail (1977) greets you upon entering the exhibition. The 15-foot-wide “Black” painting features the beveled edges and layered style seen throughout Full Circle. Its rectangular shape and darkness—in stark contrast to the round, white, wooden edges of the other paintings on view—exude a sense of beginning and ending, of possibility and finality.

In the collective blackness, all of Gilliam’s colors and contexts exist. From far away, the canvas appears saturated with darkness, and the closer you get, areas of black paint are scraped down, exposing bright, dramatic splotches of yellow, red, and blue. The array of colors is so pronounced that you can see a very deliberate area where Gilliam reapplied the black paint, drawing your eyes to the center. Rail is the chaos from which genius emerged, a premonition realized through the tondos of Full Circle, and a reminder of Gilliam’s life-long dedication to experimentation.

Born in Tupelo, Mississippi, in 1933, Gilliam developed a love for painting at an early age. By the time he reached the 5th grade, he attracted the support of his teacher and was placed in a special arts program when he entered junior high school. Gilliam went on to study fine arts at the University of Louisville, where he received both a bachelor’s and a master’s degree. In 1962, he moved to Washington, DC, where his exposure to the Washington Color School caused a shift in style that would mark the turning point in his practice. By 1965, Gilliam became the first artist to drape and suspend his pigment-soaked canvases instead of stretching them around a frame, a technique for which he received widespread acclaim.

Throughout his career, Gilliam was influenced by jazz music for its improvisational nature and the space it creates for meditation and moments of melancholy. Full Circle reads like a track listing to the album of a visionary. Before I could even begin to truly analyze the objects themselves, or delve into what each is intended to represent, I was struck first and foremost by how everything made me feel: happy, full of promise, and always aware of life’s ups and downs. I was especially taken with Something’s Going On, You Blue Moon, and Lucky, all from 2021.

The exhibition functions as a spectrum, going from lighthearted excitement in paintings that employ vibrant colors and varying degrees of saturation, to works with a more subdued palette that possess a stillness found through contemplation and solitude. Looking at Something is Going On (2021), it’s easy to imagine Gilliam in a studio, grooving to Charles Mingus, moving fluidly through splashes and spots, intentional yet unattached to the paint as it hits the canvas.

You Blue Moon (2021) conjures images of the once-lonely heart described in the classic song “Blue Moon” written by Richard Rogers and Lorenz Hart in 1934. The ballad has been a hit several times since then, covered by artists across musical genres, especially jazz legends like Billie Holiday and Ella Fitzgerald. A section of the lyrics reads “And then they suddenly appeared before me / The only one my arms will ever hold / I heard somebody whisper / ‘Please adore me’ / And when I looked / The moon had turned to gold.” Gilliam’s piece echoes the transformation. Shades of blue, flecks of white, and dashes of red dominate the canvas as a yellow-gold smolders to the surface, peeking at first and becoming more pronounced as Gilliam moves toward the bottom of the canvas. A crosshatched pattern embedded in the paint adds another layer of depth.

Lucky (2021), one of two pieces to include paint around the white frame, seems to be the exhibition’s most fluid and free-form painting. What one might consider as the background reminds me of graffiti, with its sprayed and dripped paint. In the foreground, concentrated droplets of dark blue, red, and hot pink span the top quadrant of the structure to create a loose star formation. The color white takes on varying levels of prominence throughout the exhibition, but in this piece, it creates a fluid middle ground. Taking in the work as a whole, it resembles a lucky coin. The distorted star lends itself to the idea of making one’s own luck. Its pattern and palette conjure a more whimsical moment of nostalgia, reminiscent of the color-swirled rubber balls used for the game jacks.

As each color palette sets the mood, each composition frames the conversation. What are our lived experiences if not jagged, layered, and nonlinear? Gilliam archives these textures by layering paints, altering their consistencies with thickening agents and studio scraps. According to the exhibition description, he blends these colors and uses a metal rake to reveal the layers beneath. Some are embellished with small beads of metal and employ finishing techniques like a netting overlay. A few of the tondos are sliced into quarters, supporting the idea that at times, to appreciate a whole, we must digest it in pieces.

For me, the loveliest layer of the exhibition was Gilliam’s presence at the press preview and VIP reception. As I moved through the exhibition, I heard whispers of an appearance, although it seemed unlikely to occur, given Gilliam’s health struggles in his later years and the ongoing pandemic. But silence swept the floor as Gilliam was ushered in via wheelchair with his family. He did not formally address the crowd, but his presence was more than enough. At 88 years old, Gilliam had reinvented himself several times over the course of his career. His bold and unapologetic way of breaking barriers expanded a path less traveled by Black artists in the ways of abstraction.

Gilliam’s enduring devotion to his practice amounted to a life-long interrogation of self and spirit. In Full Circle, we see yet another stage of this evolution. It is often said that you have to leave things behind to achieve a higher version of yourself. Gilliam reminds us that we must also take inspiration from our foundation to propel us further as we move toward completing our own unique circles of life.

Full Circle is on view at the Hirshhorn Museum and Sculpture Garden through September 11, 2022.