Abstraction in the Expanded Field: ‘The Space Between Us’ at Gallery CA 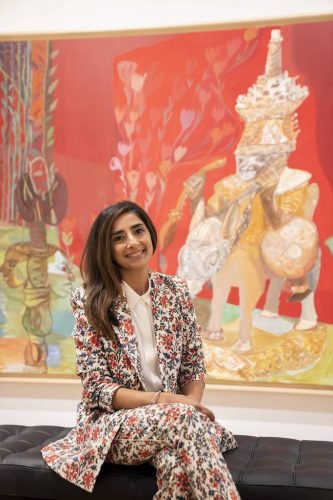 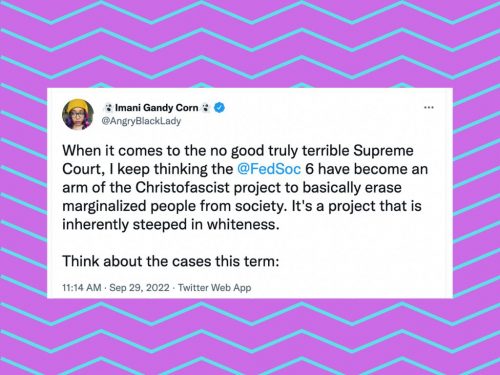 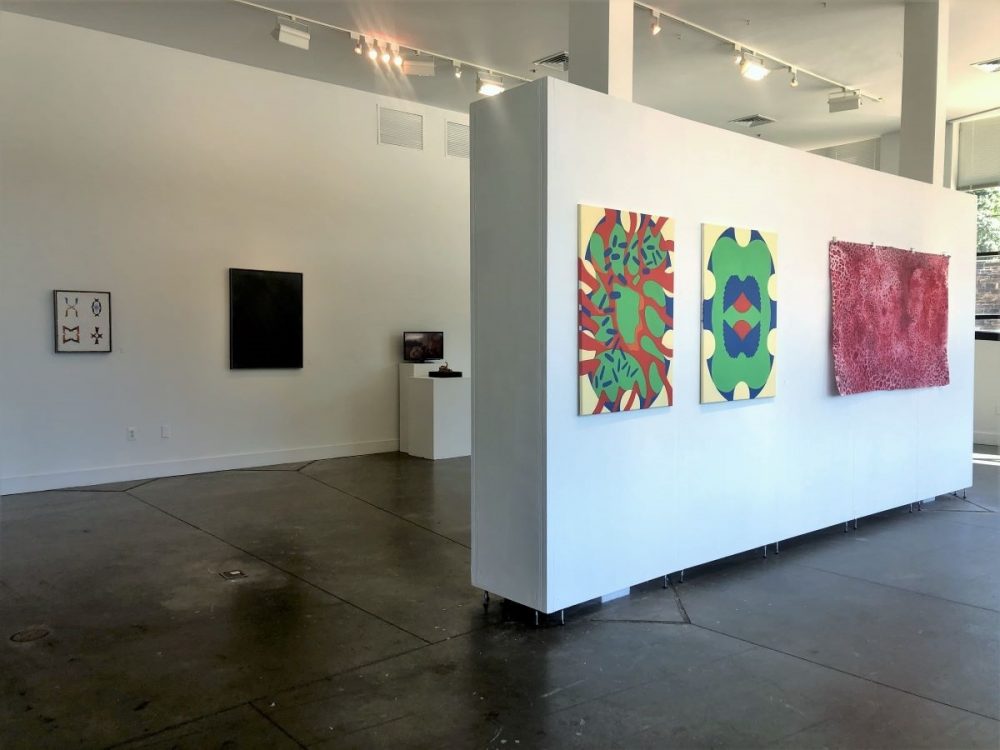 Material is the message in Gallery CA’s The Space Between Us. Redefining the concept of abstraction through the lens of BIPOC artists, the exhibition, curated by Lily Xiao, features seven multimedia artists using unique forms of storytelling in their artwork to illustrate their lived experiences with personal metamorphoses, trust in community, and the nature of seeing and being seen.

Three-dimensional textures and desaturated color palettes are central to Xavier Hardison’s “Artifact 058.” Made with acrylic and sand on board, the piece depicts four abstract interpretations of the letter X, an eye, a butterfly, and a cross. Organized in pairs, the shapes feel harmonious due to their sharp and precise outlines and how each shape incorporates x’s into its design—a subtle nod to the artist’s first initial. But each shape’s unique color palette gives them a sense of individuality: For example, the butterfly’s outline is composed of burgundy, oranges, and brown, while the letter X transitions from cyan blue to beige and ends in light brown.

The differences and similarities allow the shapes to coexist and balance each other, similar to the four elements of nature. Artifact 058’s background, a simple plane for the dynamic shapes to inhabit, is a soft white with a three-dimensional pebbled texture created by the acrylic and sand mixture. The piece is balanced and full of personality, in addition to encapsulating Hardison’s interpretation of abstraction.

Lily Xiao’s sculpture and video installation, “老虎不回家 (The Tiger Didn’t Come Home),” illustrates the process of leaving behind that which no longer serves us to reach a better outcome. The video depicts a satsuma mandarin being peeled, layered on top of a video of a woman cutting off their braids.

The videos converge into a single image in which the cut hair is placed within the peeled-off mandarin skin, curling up into its original round form as it holds the hair. In front of the monitor playing the video, the preserved mandarin skin sits unraveled on top of a small wooden platform. In art, haircuts have been historically used as symbolism for entering a new and more authentic era and a metaphor for “shedding our old skins.” Paired with the visuals of peeling an orange in order to get to the fruit, “老虎不回家 (The Tiger Didn’t Come Home)” displays the metamorphosis of becoming a new self and enjoying the symbolic fruit of one’s labors.

Bobbie Waugaman’s “Forever????” is an interactive video installation with a focus on trust. The video depicts two people playing around and laughing in a garden, interacting with one another with obvious familiarity and intimacy. The video is projected onto a circle drawing with a red spiral design and wave-like details, and the installation’s interactive element rests near the projection: There is a stand with a small wooden box, Post-it notes, pens, and a sign that reads “Before viewing, please write down one of the following: a secret, a memory, a prayer. And place it in this box. Thank you.”

By interacting, the viewer participates in an act of intimacy by trusting Waugaman with something they hold dear. “Forever????” is an active conversation between art, artist, and viewer about closeness, love, and safekeeping of the hearts that we have been trusted with.

Rebecca Marimutu reinterprets the human figure in her photographic diptych “Untitled” by highlighting it with fluorescent colors. In the first print, a chalk-like drawing of a figure’s bust, there is implied movement with the figure bowing down their head diagonally. The head is unnaturally large and there is a soft outline of the figure’s facial features still visible on the opposite side from where their features actually are. In addition, their features are defined in contrast to the soft and abstract outline of their body.

The figure is surrounded by a dark blue halo that blends into green, which highlights their bright pink decolletage. The second print is a black and white photograph of a nude Black woman, depicted sitting and visible from her jaw to her thighs. Neon green paint, applied to the print in swiping motions, hides her figure similar to the way a one-piece bathing suit covers the body. The woman’s body is further concealed and decorated with paper cutouts of colorful stars placed on top of the painted areas.

Separating the human figure’s face and body in two distinct prints, Marimutu’s piece sends a message to the viewer about the over-sexualization of the female body. The neon colors create a contradiction, attracting the eyes of the viewer while simultaneously covering the body. “Untitled” is a statement about consent and bodily autonomy that encourages the viewer to acknowledge the disjointed figure as a sum of its parts, instead of a traditional portrait and an anonymous nude.

Ramon Knight’s “Untitled” is a visually dynamic acrylic-on-panel diptych, with complimentary designs consisting of large layered shapes. Using the same highly saturated but limited color palette, they also share the same blue and green abstract shapes forming the base layers. The first half of “Untitled” is more complex than its counterpart, featuring more layers and fluid linework extending beyond the blue shape’s initial frame. The second canvas is simpler in design but its clean and precise marks and distinguishable shapes, angel wings, and semi-circles make it stand out as much as its companion.

Knight’s “Untitled” tells the story of two art pieces that started off with the same foundations and the final product became something completely different, one more controlled and the other more unrestrained. This visual storytelling can be applied to numerous stories and allegories of human experience, such as two individuals whose lives start out similarly but take different routes. The malleability of “Untitled’s” interpretation further proves how well it encompasses abstraction.

The act of stepping away to be able to see the bigger picture is an intrinsic part of abstraction that is captured well in Bobby Blazek’s “polyethylene.” The approximately 3×6-feet oil painting on a recycled bed sheet is composed of red blobs that vary in shape and depth, reminiscent of red blood cells. Up close, the red pattern appears to be random, but the full image is revealed once the viewer takes a step back.

The piece depicts three people huddled together, two of which are posed in a three-quarter view flanking the center figure who stares directly at the viewer with one unnaturally round eye. The visual elements of the red blood cell pattern and the three figures’ arrangement create an image of familial blood ties. The abstract piece asks the viewer to reexamine their relationships from a different point of view, as sometimes we are too close to see objective truths.

“She Became Exhausted,” a video installation by Adam White, portrays the internal struggle of keeping one’s thoughts straight and failing. The video reads like a photo slideshow as images fade in and out of the screen, or glitch into view for just a second. The photos themselves depict blurry or glitchy images of light fragments. The installation’s title indicates to the viewer that the abstract video is a visual representation of exhaustion, a state of being that often makes one’s mind short-circuit. The overlapping, hard-to-discern images and visual effects encapsulate this shared human experience and make it comprehensible.

The abstract works in The Space Between Us illustrate complex and layered human experiences—emotional intimacy, familial relationships, and self-acceptance—without the constraints of western ideals. The artists redefine abstraction while also expanding the possibility of multimedia storytelling.

Seen most evidently in Xiao’s video installation and Waugaman’s interactive piece, this combination of mediums creates immersive experiences that incorporate viewers as part of the artwork and convey visuals in innovative ways. By recontextualizing personal and universal experiences and focusing on artists who are Black, Indigenous, and people of color, the show presents an opportunity for other BIPOC artists to continue breaking the mold of what abstraction can look like: a fundamentally multifaceted form of expression.

The Space Between Us is on view at Gallery CA through Sept. 30