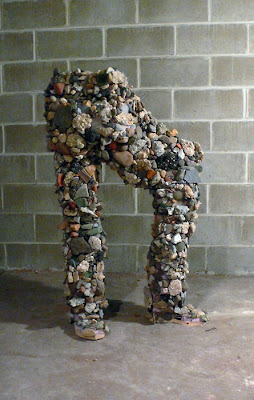 Open Space is pleased to present
Falling Off the Edge: new works by Ann Kelly and Christina Martinelli
Curated by Neal Reinalda

’Me too, I’m a painter’ means: me too, I have a soul, I have feelings to communicate to my fellow-men.” –Jacques Ranciere

In “The Ignorant Schoolmaster” Jacques Ranciere writes, “The virtue of our intelligence is less in knowing than in doing. Knowing is nothing, doing is everything.” It is in this sense that Ann Kelly and Christina Martinelli’s works embody a specific intelligence. These works are about doing. They present themselves simultaneously as objects and ideas, as poems. It is, as Ranciere says, “The impossibility of our saying the truth, even when we feel it, [that] makes us speak as poets,.., makes us communicate our feelings and see them shared by other feeling beings.”

By employing everyday materials and heavily abstracted imagery, while never failing to hide their own “hands” as artists, Kelly and Martinelli’s works are expressive without irony or kitsch. They engage the possibility of “universal experience” with sensitivity and sincerity. Mondrian wrote “art is…the direct expression of the universal in us – which is the exact appearance of the universal outside us.” It’s this direct expression of the universal that these works approach in their confusion of art and life. In conversation with Cindy Nemster, Eve Hesse speaks of this confusion:

“[People say] you can’t confuse life and art. But I think art is a total thing. A total person giving a contribution. It is an essence, a soul … in my inner soul art and life are inseparable. It becomes more absurd and less absurd to isolate a basically intuitive idea and then work up some calculated system and follow it through – that supposedly being the more intellectual approach – than giving precedence to soul or presence or whatever you want to call it … For me it’s a total image that has to do with me and life. It can’t be divorced as an idea or composition or form.”

This confusion of things is what makes these works vibrant, daring, and challenging. They refuse to function on a singular plane. We should as Rainciere says, “learn near those who have worked in the gap between … the silent language of emotion and the arbitrariness of the spoken tongue, near those who have tried to give voice to the silent dialogue the soul has within itself, who have gambled all their credibility on the bet of the similarity of minds.”

EH: So I am stuck with esthetic problems. But I want to reach out past…I want to give greater significance to my art. I want to extend my art perhaps into something that doesn’t exist yet…

EH: That’s a nice way of saying it. Yes, I would like to do that.