What is your Tar Baby? Reception and Artist Talk at Galerie Myrtis Feb 12 & 13

Of House and Home at the Whole Gallery Feb 19

What is your Tar Baby? Reception and Artist Talk at Galerie Myrtis Feb 12 & 13 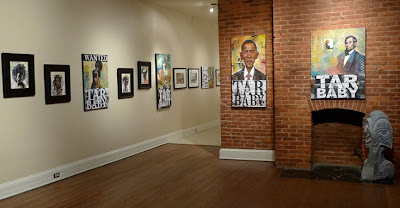 In the story of Brer Rabbit and the Tar Baby, the plucky folk hero falls prey to his own hot temper. “Are you deaf or just rude?” he demands of the figure seated beside the road, who refuses to respond to his greetings. “I can’t stand folks that are stuck up! You take off that hat and say ‘Howdy-do’ or I’m going to give you such a lickin’!” Shortly, he lays into the “baby,” but quickly discovers that it is a dummy created by his archenemy, Brer Fox. Too late: He’s become ensnared in the black goo.

The tale, which has roots in African American slave-era storytelling and was popularized in the late 19th century by Joel Chandler Harris (the quotes above come from a version by S.E. Schlosser), is being told in fresh forms this month at Gallerie Myrtis in the Old Goucher neighborhood. The gallery’s current exhibition, “What is your Tar Baby?” is a solo show of mixed media paintings by Atlanta-based Charly Palmer. Using the story as a cultural metaphor, Palmer analyzes the “sticky situations” that often entangle public figures. Using painted portraits, layers of text, and scraps of pattern, Palmer depicts President Barack Obama, singer and actor Paul Robeson, comedian and film producer Dave Chappelle, Marilyn Monroe, and many others, in order to question the bigotry, racism, and the stereotypes that confine them.

“Your convictions, your weaknesses, or your environment can be your tar baby,” explains gallery owner Myrtis Bedolla. “According to the artist, ‘sometimes the tar is simply being black,’ but these figures were chosen for their cultural resonance. Paul Robeson’s tar baby was his belief in communism. Richard Pryor’s was his drug use. The artist got started on this idea after hearing Cornell West speak about the political snares that surround and entangle President Obama. After that, he began looking at a number of famous civil rights leaders, athletes, scholars, and celebrities and realized that each one had their own kind of tar baby.”