Once Upon a Time reception Thursday, April 7 at Goucher’s Silber Gallery

Once Upon a Time reception Thursday, April 7 at Goucher’s Silber Gallery 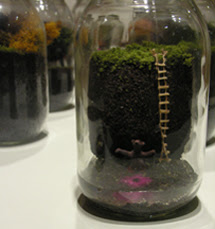 Once Upon a Time . . . — an exhibition featuring the work of nine artists who examine storytelling as illustrated in narrative artwork — will be presented at Goucher College’s Silber Art Gallery from Tuesday, April 5, through Sunday, May 8.

This exhibit, which is free and open to the public, can be viewed Tuesday through Sunday from 11 a.m. to 4 p.m. An artists’ reception will be held Thursday, April 7, at 6 p.m. Call 410-337-6477 or visit www.goucher.edu/silber for more information.

Libby Barbee is interested in the narratives that cultures create to describe their relationship to the natural world and how these narratives establish cultural identity. In In Search of the Myth, Barbee examines the historical relationship between Americans and their environment as it is represented in the American frontier myth, which has served as the primary creation myth for the United States. Though it has mutated over time, it continues to be the dominant narrative from which contemporary American political attitudes and identity derive significance.

Nora Sturges’ series of paintings was inspired by the narrative structure and subject matter of Italo Calvino’s novel Invisible Cities, in which a fictitious Marco Polo describes to Kublai Khan all the cities he has visited on his travels. The paintings grew to encompass the artist’s personal experience of travel and cultural displacement, as well as ideas she took from The Travels of Marco Polo.

As a child, Erin Fostel spent hours in her room writing, daydreaming, and creating different worlds on paper. Fostel wishes she had retained that pure, naïve imagination. In this series of imaginative drawings, she creates narratives where an imagined play has become all-consuming, and the audience witnesses what the characters have created.

Pamela Phatsimo Sunstrum is interested in how travel experiences can become mythologies that address the traces of history, stories, and memories from individual and collective identities. Her work is often interdisciplinary and ranges from love poems collaged from news headlines, to photo animations, drawings, performance, and sound works, to installations composed of found materials and traded goods.

In her work, Audrey Lea Collins Petrich explores memory, nostalgia, and utopia. By creating dioramas, vitrines, and life-sized sets, she invites the audience to share a moment in time, a glimpse of a personal utopia portrayed by an environment. She memorializes these places and events by obsessively recreating the physical location and environment along with the objects that were present, but she leaves the narrative to the viewer.

Katelyn Greth is interested in dark fairy tales, surrealism, and the inner child. Drawing inspiration from childhood fables, such as Little Red Riding Hood, and her subconscious dream state, she creates doll-like sculptures that are simultaneously familiar and otherworldly. Each sculpture depicts a moment from a larger narrative, thus encouraging the viewer to ponder and imagine the story behind its creation.

Themes of fantasy and nostalgia pervade James Swainbank’s paintings, and he attempts to evoke the viewer’s memories of youth and early imagination with culturally familiar figures. Swainbank presents these themes in a style and handling from centuries past — the work directly and indirectly borrows from early- and high-Renaissance painting of the northern and Italian traditions, as well as mimics the techniques of the old masters. But despite the art-historical context in which Swainbank’s narratives are created and staged, the characters and issues are wholly contemporary.

Rochelle Abramowitz has been making tiny things since she was a child; however, she only recently rekindled her love for all things small and began making miniature diorama sculptures. Her newest work is inspired by music from singer, songwriter, and harpist Joanna Newsome.

Brent Green is a filmmaker, writer, musician, and, perhaps above all else, a storyteller. His tragic, yet hopeful films unfold layer upon layer with a building sense of urgency. In the end, nostalgic feelings and loss transcend to a state of wonderment, a thoughtful reminder of Green’s idea that “there is euphoria all around you — you’re swimming in it.”

It’s hard to reconcile my rich memories of the place with what now reads as a limited and parochial landscape.