The Disinformation Phase Book Release and Party a [...] 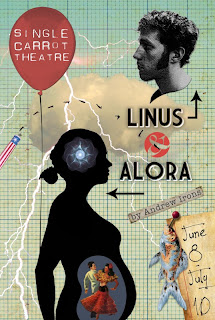 If you’ve ever fallen in love with a fantasy novel and then watched the movie version, you understand the difference between believing and seeing. One type of connection is magical, seamless, and complete while the other, even with high-tech and high-cost effects, tends to be a flawed and limited experience. To create a successful visual representation of fantasy, there is always a fine line between too much and too little, between literal and allegorical, and this is especially crucial for live theater.

Linus and Alora, the newest play at Single Carrot Theatre directed by Genevieve de Mahy, embraces a hyperbolic approach, as it attempts to bring imagination to life. Besides credible, solid acting, this over-the-top production employs a live band, dancers, and stream-of-consciousness video projections to mirror the plot, which veers into whimsy, grief, sentimentality, dark humor, and slapstick hilarity.

The play opens with Alora (Susannah Edwards), a young woman, at the doctor’s office. You learn that she had cancer as a child, and that it has returned. “How long do I have?” she asks. “No more than nine months,” the doctor replies. Immediately, two macabre and sexy dancers appear for a flamenco-esque interlude and a live band, including guitar, clarinet, banjo, and mouth harp, emerges to accompany them. All participants wear white face make-up with blacked eye sockets to create an otherworldly visage. A menacing chorus of doctors, wearing white coats and pantyhose over their faces, dances aggressively around Alora until she collapses on the floor. What can you do when faced with such terrible news? Alora resolves to cope with her illness the same way she did as a child—to escape into fantasy.

“A lot can happen in nine months,” is the line repeated by several characters during the one-act play, in a number of different contexts. Rather than telling her husband, Linus (Nathan A. Cooper), that she is dying, Alora imagines that she is pregnant. Her son-to-be appears and they have a warm conversation. Then, a trio of imaginary brothers—Neal, Owen, and Arthur—arrives. Their bumbling, good-natured, and sometimes violent outbursts are nearly identical to the antics of The Three Stooges, and they entertain and console Alora. Though Linus can’t see or hear the imaginary visitors, he goes along with the charade. He is thrilled to learn his wife is pregnant and he begins to fill their house with stuffed animals for the child.

The set in this simple black box verges on minimal, but works to effectively separate reality from fantasy. A black balcony, equipped with a sliding board in one corner functions as the couple’s apartment while a glowing tent, at the opposite end of the theater serves as a source for fantasy characters. A pit full of stuffed animals on the floor is the central emphasis of the stage and it creates a sense of unreality, and also allows characters to fall comfortably and balance precariously above it. The audience is seated in three sections of the theater, and much of the action unfolds in the same spaces, so that the audience is informally integrated with the production. Throughout the play, a large numerical timer on the wall is adjusted, with the numbers growing smaller and smaller, an ominous reminder of Alora’s shrinking future.

As Alora’s condition becomes worse, her imagination becomes more vivid. In the beginning, Linus resists Alora’s fantasies and is unable to share them, so he offers sensible alternatives. When Alora pleads with him to take her “to the stars,” Linus replies, “What’s wrong with the park?”  When an emergency strikes, Linus has no other choice, but to call on his wife’s fictitious brothers for help. Instead, he is confronted by his own childhood imaginary friends who take him back in time to the source of his resistance to fantasy. After his emotional breakthrough, Linus is able to fully embrace the world that becomes more and more necessary for Alora to escape to. The couple dances, laughs, and fantasizes about their child together, despite Alora’s static waistline. As the numbers count down, their relationship becomes more tender and intimate, and their collective imaginings become more and more complex.

Throughout the play, stream-of-consciousness video footage plays on several of the empty black walls of the theater. Projected imagery includes shooting stars, Old West landscapes, medical technology, and balloons, as well as original stop motion and painted animation which depicts Alora’s past. This is such an effective way to create changes in scenery and mood, as well as to access imaginary worlds, it’s amazing that more theatrical productions  doesn’t use this technique. Single Carrot Theatre employed five local artists to create the video footage: Chris Hartlove, Diana Peralita, Justin Salvia, Sandylee Triolo, and Jane Westrick all contributed different images and subject matter that blend together in the production.

There are times when the high-tech, multi-sensory effects distract from the emotional intensity of the play, but, for the most part, the audience is complicit in Linus and Alora’s fantasy world. Although this production emphasizes literal seeing – illustrating past events in video, for example – it also allows room to connect with the characters and maintains a high level of emotional involvement. Despite a tragic outcome, Linus and Alora manages to shine a ray of hope on the power of loving relationships and cultivates a strong belief in creative visualization as a tool for solace and even humor, in the face of a dire circumstance.