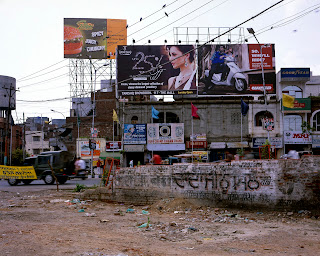 When asked if he thought it possible for the camera to lie, world famous photographer Walker Evans replied, “It almost always does.” Although he was hired by the United States Governments’ Farm Security Administration to document the plight of migrant farmers during the Great Depression, he never considered himself a documentarian. Rather, Evans believed his photography to be “the capture and projection of the delights of seeing … the defining of observation full and felt.”

Whether he intended to or not, Evans’s approach has influenced many generations of photographers—artists who choose to use photography to document events and places in an expressive and personal way. Passing Times and Places: Works by Ed Worteck and Ben Hoke, a new exhibit of photography at Gallery 1448, embodies many of Evans’s ideals, especially his commitment to multi-sensory observation, where one’s feelings and opinions are depicted along with the physical characteristics of the subject matter.

The exhibit features a selection of framed black and white photographs taken by Worteck over the past twenty-five years and a series of flexi-mounted color photos by Hoke, created in 2009 and 2010. Worteck has been a photography professor at Goucher College since 1980, and served as a teaching fellow at Yale from 1996 to 1997. Hoke is a recent Catonsville High School graduate and a self-taught photographer.

As photographers, Worteck and Hoke are cut from the same cloth, despite their differences in age and experience. Both shoot exclusively in film, despite the ubiquity and efficiency of digital photography. Both use large and medium format cameras, instead of a smaller, point-and-shoot camera. Both choose to photograph landscapes and places in transition, often urban or industrial sites that no longer exist in reality, except in their photos. It is not surprising that both cite Walker Evans as a mentor, so important that even the wall text in the gallery was chosen in the same typeface Evans used his books.

Hoke’s color photographs from several Indian cities depict the trappings of history, as well as the impact of modern civilization in densely saturated and subtle color. “Amritsar Billboards and Traffic” is teeming with layers of flashy advertisements, decaying architecture, moving traffic, garbage, and power lines. Through Hoke’s lens, the scene is a dazzling array of color, detail, and activity, more like an elaborate jewelry setting than a chaotic mess. “I like to capture the interaction of history and the present, not as a document, more to express a connection with a place, to express a relationship with it,” Hoke explains.

Worteck concurs. “While my photographs are documents, they are not documentary photographs. Perhaps they are closer to the genre of writing known as creative nonfiction. In most of my photos, I capture places and times that have passed.”

Next to Hoke’s intense color prints, Worteck’s “Spinning Wheel – First American Rayon Factory, Marcus Hook, Pennsylvania” comes off as dusky and subdued. However, once your eye begins to navigate the variety of rich, velvety grays, you become aware of an overwhelming amount of textural detail in the print. From the peeling paint on the ceiling, to the gritty debris on the floor, to the intricate layers of circular machine parts, every inch of the print is full of sensory information. Like many of the prints from his “Unmaking of America” series, this photograph captures an abandoned factory from Pennsylvania, just before it was demolished for redevelopment. “These images represent the end of manufacturing and skilled labor as a major cultural and economic force in America,” says Worteck. “I consider these photographs as elegies to all those who passed through these landscapes and structures.”

A majority of the photographs in Passing Times and Places were created with a large format view camera, an updated version of the original cameras used to create Daguerreotypes in the early 1800’s. The cameras are large and cumbersome, and need to be mounted on a tripod. Each has an accordion-shaped bellows, an external lens, film holder, light meter, and requires the photographer to put a dark cloth over his head to see through the lens. Large format cameras shoot only one or two images per set-up, and create very large negatives, typically 4×5 or 8×10 inches large.

Large format photography is a slow, exacting process, but the photographer has a higher degree of control over the image than a point and shoot camera can offer and the large size of the negative creates an infinitely richer image, with an exponential level of detail and subtlety in tonality. According to Worteck, “Some 4×5 shots take two hours to set up, others can be shot in about ten minutes. I often shoot a place once, then, after I take it home to develop and print, I’ll come back and reshoot under different weather conditions or slightly changing the angle.”

Though both photographers have worked with digital media in the past, they prefer the physical process, as well as the thinking process, involved in large format photography. The densely rich images on the wall of the gallery are a testament to their labor-intensive process. “When you work in this way, you have to really have strong feelings for your subject,” explains Hoke. “You can’t see the image immediately so you have to work slowly and get to know your subject and your media really well. My goal in photographing is always to see with greater clarity and openness.”