All My Friends Are Painters opens July 20 at Addison/Ripley

Photos from the Sondheim SemiFinalist Exhibit at MICA

All My Friends Are Painters opens July 20 at Addison/Ripley 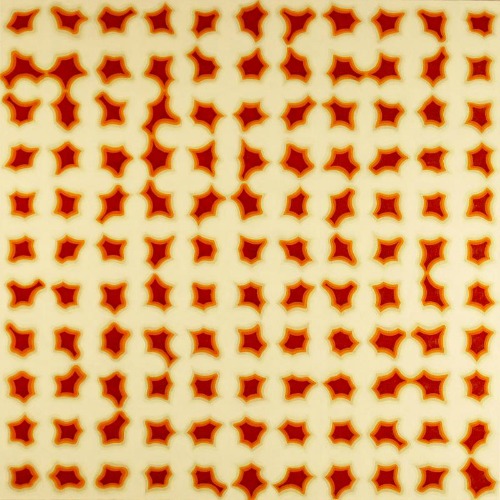 Steve Cushner, UNTANGLED, 2010, acrylic on canvas, 53 x 46 inches
Addison/Ripley Fine Art is excited to present All My Friends Are Painters: a group exhibition curated by Dan Treado
As abstract painting celebrates a milestone – it’s 100 years old – the significance of Art in the Age of Mechanical Reproduction has yielded to the primacy of Art in the Age of the Image, where all and anything goes and singular focus on a particular medium, such as painting, might be considered a less than useful way to spend one’s time in the studio. For these 8 artists, however, the mark of the hand and the materiality of the stuff of paint is a seductive combination that can very easily add up to a career of exploration.
A certain descriptor might apply to most of them, even: that of being a “painter’s painter.” It’s a curious turn of phrase; it usually refers to an artist who is respected by peers as a supreme executor of craft with a distinctly personal body of work, and also as a thinker who is thoroughly engaged in thinking about the problem of painting. The term also describes someone who is not afraid to make work that feels a little argumentative — and as such, advances a viewpoint about how that artist wants the world to look and feel. For the most part, these painters have committed themselves to inventing and exploring abstract systems and organic structures in which the equally inventive handling of paint is a significant part of the work.
Their efforts combine to uncover some simple truths about painting that are worth considering. Some argue that, these days, painters of abstraction are committing acts of resistance; I would argue that these artists’ works are crafting worlds unto themselves, sui generis, and that the reaction to outside aesthetic forces is quite irrelevant. It is the exquisite benefit of the viewer who, upon considering the work, has no choice but to engage in the deliriously pleasurable viewing exercise that, very succinctly, succeeds in arguing for itself. – DAN TREADO

News & Opinion
The Internet Is Exploding: 10 Must-Read Articles This Week

The internet was chaotic this week, but patterns are also starting to emerge.

News & Opinion
Fever Dream: Symptoms, But No Covid-19 Tests and No Results
It took eight days of coronavirus symptoms and a trip to the ER to get a test

The US has known about COVID-19 since January. Why are there not enough tests?

The town of Bacurau fights back, they do some damage, and it feels like a victory for its characters and for viewers, a blueprint for imminent direct action and self-defense.

News & Opinion
Take Care of Yourself: On Chronic Illness and Anxiety
Organizing my memories into a semi-linear timeline gives me a whisper of peace

The cruelty of our government is overwhelming.