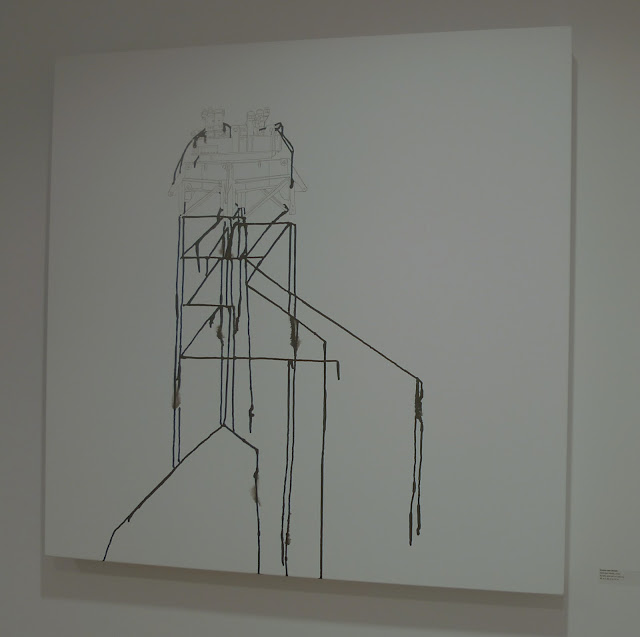 Geo-Structure
Goucher College’s Silber Art Gallery in the Athenaeum
September 4 – October 7, 2012.
This exhibit, which is free and open to the public, can be viewed Tuesday through Sunday from 11 a.m. to 4 p.m. or visit www.goucher.edu/silber for more information
The works by artists Jessica van Brakle, Ryan Browning, Mimi Frank, Magnolia Laurie, Bill Schmidt, Richard Vosseller, and Jowita Wyszomirska use repetition and architectural building blocks to comment on their surroundings and daily experiences.

Mimi Frank
Mary Annella “Mimi” Frank uses the geometry of chairs to explore familial relationships. A chair can be a powerful metaphor, a connection between people and the positions they occupy. Frank’s “constellation” of small welded steel chairs expands across space to illustrate the complexity of interpersonal connections.

Magnolia Laurie
Magnolia Laurie’s paintings and installations show delicate and makeshift systems and structures that may not endure their own weight, let alone impending disruptions. Referencing modern architecture, nomadic cultures, and the nesting habits of bowerbirds, the works depict the instinctive, sometimes-manic act of building.

Ryan Browning
Ryan Browing uses painting to suggest space and the actions and decisions of its creator over time. Browning’s paintings consider the nature of the contemporary landscape and how space and memories are felt in an increasingly layered, complex world. He draws from experiences and memories, both real and virtual, to generate the imagery in his works.

Jowita Wyszomirska
Jowita Wyszomirska’s site-specific wall drawings are dynamic arrays of geometry that navigate between random and chaotic. She employs a range of commonplace materials – masking tape, Tyvek, plastic, and wire – while hovering between two- and three-dimensional states. Intrigued by underlying cycles and ongoing changes in landscape where manmade and natural worlds intersect and override one another, her work reflects the web of complex relations.

Bill Schmidt
Bill Schmidt’s roots as an artist are in traditional, observational painting. His works depict the sometimes-uneasy coexistence of the manmade and natural worlds. Schmidt prefers to begin each painting without a clear idea of the end product. His images – made from various combinations of gouache, ink, charcoal, and water-soluble crayons – encourage the viewer to make associations and arrive at a personal understanding that is likely to shift each time the work is considered.

Richard Vosseller
Richard Vosseller often uses wood, sheetrock, and other residential construction materials for his sculptures, which he bases on the meter of poetry. In all of Vosseller’s projects, he endeavors to solidify his thoughts on failure. His recent foray into three-dimensional scanning has provided a fertile proving ground for this idea.

Fashion & Lifestyle
Vision Under Quarantine: 15 Baltimore-Based Photographers to Follow on Instagram
Poignant observations, compelling points of view, and beautiful fantasies, made in Baltimore during the Covid-19 pandemic and quarantine

We are living through a major historical event and it's essential that we record our experiences.

Visual Art
Seeking Out Imperfection with Ellen Lesperance
Ellen Lesperance talks about the relevance of craft, the beauty of mistakes, creative direct action, and more

Craft materials, like art materials, need to be utilized to generate new and personal meanings that have relevance, that also engage with the world of ideas.

This week we are featuring online events that you can view from the comfort of your own couch plus a few ways to get involved locally. Stay home, stay healthy, stay engaged in the arts.

Opportunities to help out, apply for much-needed support, and make plans for the future.