Photos from The Contemporary Response at Galerie Myrtis

Photos from The Contemporary Response at Galerie Myrtis 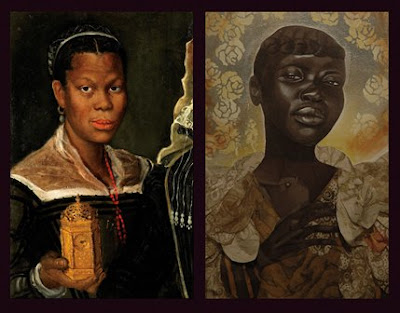 Left image: Annibale Carracci (attributed), Portrait of a Black Servant, (Fragment of larger portrait),
Oil on Canvas, 24 x 12 in., ca. 1580s. Courtesy: Leeds, private collection.
Right image: Jamea Richmond-Edwards
Giving a seasoned artist an assignment is always a gamble. Most will rebel against a new directive, or simply ignore it. However, in the best case scenario, an accomplished practitioner will integrate the challenge into their current practice, and enrich their output significantly based on all kinds of visual research. This seems to be the case in the new exhibit at Galerie Myrtis.
In The Contemporary Response, eight contemporary African-American artists were asked to create a new, original work based on one of the works included in ‘Revealing the African Presence in Renaissance Europe,’ currently on view at The Walters. The results abound from mixed media assemblages to more traditional oil paintings, with a particular emphasis on the human figure, although not exclusively.  – Cara Ober
Revealing the African Presence in Renaissance Europe: The Contemporary Response
September 27, 2012 – January 19, 2013
Galerie Myrtis, Baltimore, MD