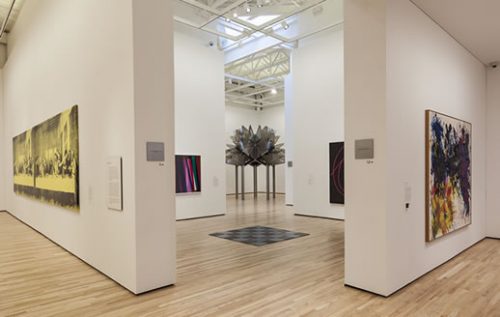 Four Women and a Bicycle: The Five Most Important [...] “I love the way that Guyton/Walker’s art speaks to the work of many of the great artists of the twentieth century—the use of appropriated pictures that one finds in Pop artists like Warhol and Lichtenstein, the interest in recontextualizing objects from the everyday world that we associate with figures like Duchamp and Warhol, and an interest in basic, serially repeating forms that defines many Minimalist works,” says Curator of Contemporary Art Kristen Hileman. “It’s almost as if there’s an art history lesson embedded in each of Guyton\Walker’s work.  However, there’s also an attitude or spirit of irreverence and questioning that keeps their art from being purely didactic, and the tools they use to produce their pieces—scanner and Photoshop—very much speak to the present.”

According to official Museum text, “Wade Guyton and Kelley Walker have established careers of their own as individual painters, but when they collaborate, they put aside their personal styles to produce work as a third creative entity, Guyton\Walker. Not unlike artists of an earlier generation, such as Robert Rauschenberg and Andy Warhol, the duo turns to their surroundings for content, appropriating images from magazines and catalogs. However, they update the approaches of those earlier artists by placing fresh fruit and other commonplace items on a digital scanner and using Photoshop to build compositions.”