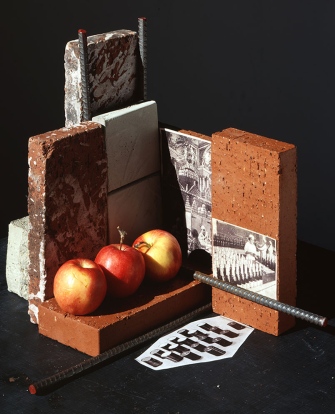 New History , the current show at Guest Spot’s new Calvert Street location, brings together four artists whose work explores themes of memory, time, and cultural identity. Ranging from internet-based work to collage and constructivist photography, the show explores the ways in which we catalog and interpret memory in a personal context, as well as how our stories shift and change, becoming part of a larger cultural fabric when they are put out into the world to interact with the memories of others. “The artist’s processes in New History range from individuals who create something tangible from an abstract idea to people who’ve had a lived or perceived experience and use that to create something abstract,” Ginevra Shay, the show’s curator, says. http://citypaper.com/arts/visualart/reinstitutionalized-1.1399344

Art Fag City: Jen Catron and Paul Outlaw Go for the Gold by Corinna Kirsch
Jen Catron and Paul Outlaw are some of the most passionate performance artists we know, but they’re bored by most performance art. “What’s the best thing about performance art?” Paul Outlaw quizzed me during a phone interview. “I don’t know. I left before it’s over.” Given those feelings, it’s unsurprising that the two have made it their goal to make the most unboring performance art possible. Last we checked, the duo were getting sand in their American flag swimwear at Creative Time’s artist sandcastle competition. They won first prize for a whimsical entry: a fortress full of sunburned performers spitting at the passers-by. http://www.artfagcity.com/2012/11/08/jen-catron-and-paul-outlaw-go-for-the-gold/

Art in America: Post-Sandy, the Art World Heads to the Rockaways by leigh anne miller
Over the course of several days last week, MoMA PS1 director Klaus Biesenbach went from tweeting snapshots of Rockaway Beach surfers in wacky Halloween costumes to devastating photos of the heavily damaged Rockaway peninsula. The popular surfing area in Queens is less than 20 miles from Biesenbach’s Long Island City museum. “There are whole families standing outside in the cold, in front of everything they own, kids not wanting to leave their ruined toys,” he told A.i.A. On Nov. 1, Biesenbach, who spends summers in the Rockaways and recently purchased a house there, was arranging bus and van rentals to take 100 volunteers and supplies to a distribution center at Beach 84th Street the following Saturday. In groups of two they went door to door making “shopping lists,” delivered supplies, and helped clear basements. http://www.artinamericamagazine.com/news-opinion/news/2012-11-09/hurricane-sandy-rockaways/

Hyperallergic: The Fair Begins, Artissima Giornale #3 by Lindsay L. Benedict
TURIN — Last night, we had to hustle to get tickets for the Artissima after party. It was a sad moment because some of us got the tickets and the others did not, it fractured the group (would it be another night at Liber, our local billiard parlor?). In fact, the presence of Artissima in Torino has changed the energy and rhythm in our home. Lia Cecchin’s artist edition, 150 euros to support Cripta 747. What I love most about living here is the time, endless amounts of time spent together, often doing nothing — which is difficult for me because I am so well trained to produce. Another thing I love about being an artist in Torino is the impossibility of being organized, which forces me to let go of my need to control everything. The wild unpredictability amplifies a certain chronic desire.
http://hyperallergic.com/60052/the-fair-begins-artissima-giornale-3/

New York Magazine: The Sinking of 22nd Street, Art and commerce underwater. By Benjamin Wallace
Twenty-second Street between Tenth and Eleventh Avenues grades downward. Last Wednesday, the residual high-water mark graphed the extent of the damage. Near Tenth, it was at your ankle. Toward the middle of the block, it hit your shin, your thigh, your waist. As you approached Eleventh, it passed your chest until it was at your armpit.
“It was surreal,” said a resident who watched the Hudson arrive. “One minute the street was dry, the next it was a full-on river. Our doorman couldn’t get to his car on the street fast enough to drive it away.” The water flowed over the block-long 7,000 Oaks installation, by Joseph Beuys—slabs of rock planted next to trees—and it entered the galleries and shops, drowning gowns and paintings.
This is where Chelsea gentrified. It was the first big art block—pioneered by Dia and Matthew Marks, settled by major galleries (Sonnabend, PaceWildenstein) and high fashion: Balenciaga and Comme des Garçons opening stand-alone stores. Plus the High Line, the condos, Linda Evangelista and Kate Winslet. For a decade, it was where one-percent money came to play. http://nymag.com/news/features/hurricane-sandy-art-galleries-2012-11/

You may be more likely to encounter Serra Victoria Bothwell Fels’s atmospheric installations in a ruined building (she participated in the acclaimed 2011 installation “The Music Box” in New Orleans) or an abandoned convent (“Sequence of Waves,” also 2011, in Greenpoint) than a gallery. Yet no matter the location, her work converts the space it inhabits into a strange new world. “I’m interested in sculpting environments, and playing with how specific qualities of constructed environments create experiential constructs for the people in them,” Fels told ARTINFO. “I like to make sculptures people can touch, where you can get inside a sculpture’s mood.”
http://www.artinfo.com/news/story/839527/emerging-serra-victoria-bothwell-fels-erects-eerie

Joan Mitchell is a painter who hates esthetic labels. She agrees with Harry Holtzman that “the hardening of the categories causes art disease.” She finds particularly distasteful moral insinuations concerning “good” versus “bad” criteria, and insists that “there is no one way to paint; there is no single answer.” Miss Mitchell is reticent to talk about painting, so in order to approach the underlying processes in her work, the Socratic method was needed, rejecting some classifications, modifying or keeping others. The catchphrase to which she objected least was “New York School,” and she readily admitted membership in that non-academy. Unlike some of the younger artists who have reacted away from the elders of Abstract-Expressionism, she sees herself as a “conservative,” although her pictures can hardly be described as hidebound. She not only appreciates the early struggles of the older painters, whose efforts expedited acceptance for those following them, but finds a number of qualities in their work that have a profound meaning for her. http://www.artnews.com/2012/11/05/mitchell-paints-a-picture/