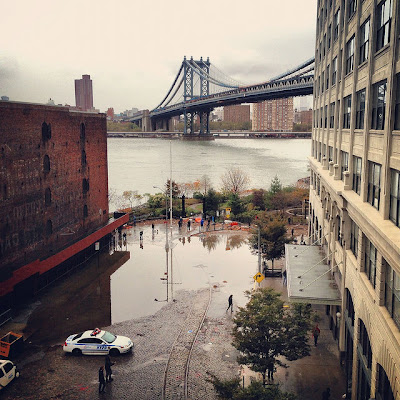 Hurricane Sandy hit DUMBO, Brooklyn’s waterfront neighborhood, and hard. Heavy with non-profit art spaces, we wondered how many were doing after the storm.

Dumbo Arts Center stayed high and dry despite its location on Front Street, the neighborhood’s pulsing strip of shops and galleries just two blocks away from the East River. It helped that the gallery, like many in their building, is on the second floor. On Tuesday evening, Dumbo Arts Center Executive Director Karl Erickson told us, “Our building doesn’t have any power at this time, and we haven’t heard when it will be restored, but we fully expect it to be on in time for our opening of ‘A Wake’ on Thursday night.” A few hours later, Erikson added via email, “Hoping to have power back for a Saturday opening, but no confirmation yet.” The gallery has decided to postpone their opening tomorrow of A Wake: Still Lives and Moving Images, and the neighborhood-wide art walk scheduled to coincide with it has been cancelled.
http://www.artfagcity.com/2012/10/31/dumbo-after-hurricane-sandy/

Hyperallergic: What is the Labor of Art Writing? Part 1

Last Thursday night at Housing Works Bookstore Cafe, Occupy Wall Street affinity group Arts & Labor organized a panel of New York art writers to discuss the labor of art criticism. Village Voiceand New York Times critic Martha Schwendener opened the round table with the question, “What is the labor of writing?” Schwendener and Arts and Labor proposed a discussion about the working conditions of art criticism in an effort to dispel some prevailing myths, which she framed as power, authority, and allure. She then started things off with an open question to the panel about how they became art critics. http://hyperallergic.com/59509/labor-of-art-writing-part-1/

Art Fag City: Photos From the Aftermath in Chelsea

Walking down 21st street yesterday was a sobering reminder that even the most impenetrable Chelsea galleries are run by people; from the looks of it, they may have been hit the hardest. We wouldn’t wish this on anyone.
http://www.artfagcity.com/2012/10/31/photos-from-the-aftermath-in-chelsea/

ArtInfo: After the Flood – How Will Hurricane Sandy Change New York’s Art World?

Frankenstorm Sandy has shaken the city, from the aeries of its postmodern penthouses to the obscure reaches of its still-flooded subways. Many thousands remain without power, and the return to normalcy will be long and trying. Truth be told, the transformation of Chelsea’s sparkling gallery neighborhood into waterlogged chaos is probably a minor episode within the greater drama, but it is a highly visible one. These images — and others from inundated studios and spaces from across a blighted New York — are upsetting, representing livilihoods lost or at least transfigured.
http://www.artinfo.com/news/story/838275/after-the-flood-how-will-hurricane-sandy-change-new-yorks-art

Baltimore Citypaper: Strangers in a Strange Land: Walters explores the role of Africans in the world of Shakespeare and Leonardo da Vinci By Evan Serpick
Anyone who’s taken a 10th grade American history class is generally familiar with the contours of African-American history, which dates back to the 17th century. But the experience of Africans in Europe goes back much, much further, to the days of Hannibal, from modern-day Tunisia, and Egypt’s Cleopatra, the last of the pharaohs, who are among the many early Africans in European lore. It’s a thousands-of-years-old history, full of changing dynamics of military strength, cultural exchange, and power. By the time of the Renaissance, Africans were a significant presence in Europe, from servants and slaves to royal court members and diplomats. http://citypaper.com/arts/visualart/strangers-in-a-strange-land-1.1392372

The Most Incredible Campus Art Collections Around the World by Best Colleges dot com
The Louvre and the Metropolitan Museum of Art aren’t the only places to go to see amazing collections of art. While often overlooked by tourists and locals alike, college and university collections can be very impressive, and in some cases boast hundreds of thousands of works that range from contemporary paintings to carvings by ancient artisans. These collections can be great resources for students and the general public alike and in many cases rival those of major art museums in their size, scope, and uniqueness. Such university art collections exist all over the world, and we’ve highlighted just a few of the biggest, best, and most compelling here that will undoubtedly impress any art enthusiast. http://www.thebestcolleges.org/the-most-incredible-campus-art-collections-around-the-world/
Share

Unlike Basel, where you know the names of every single artist and gallery, at Maco there was so much space for discovery.