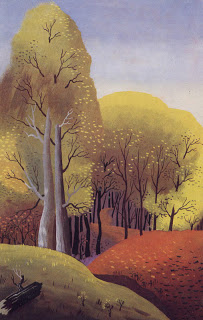 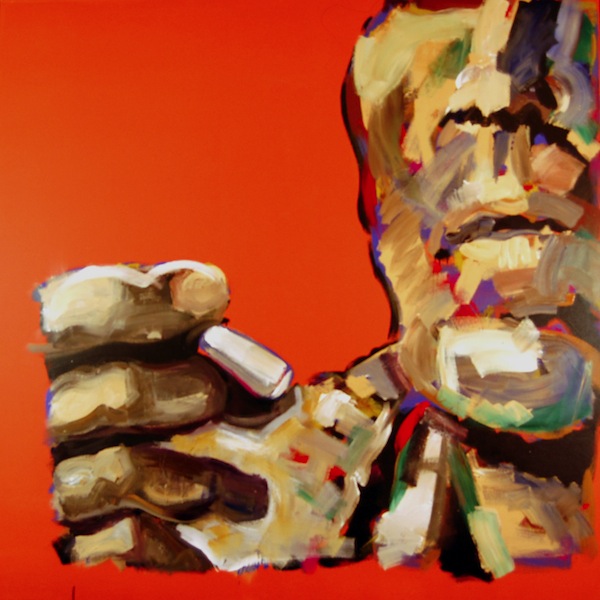 This summer I had the opportunity to visit Ashley Lathe’s Studio at MICA. At the time, Ashley was enrolled in his third summer of the Low Residency MFA in Studio Art (MFAST) program. Having just graduated from the program myself in 2012 I was surprised at what I saw: The studio walls were covered with large brightly colored expressive paintings of a man’s face. The man in question turned out to be Andy Griffith. These paintings seemed to go against the ethos of the kind of contemporary work that I usually seek out but I liked them nonetheless. I really wanted to find out why, so I decided to ask some questions through an email exchange. The answers to the questions I posed seem to be as refreshing as the work itself.

Bart O’Reilly: What is the primary motivation behind your new work?

Ashley Lathe: That’s a great question. It’s often difficult to understand why I did something until after the fact. There is a compulsion to do something, to make something, and the bigger picture only presents itself afterwards in a broader context. This is no exception.

I went into this series with a simple goal; to work within the limitations of a traditional approach to painting; paint on canvas. While I consider myself a “painter,” I have spent my efforts exploring ways to take painting into different contexts, to challenge what the essence of painting is. I always want to challenge myself, and the time seemed right to confront an agreed upon approach to the medium. This meant treating the canvas surface as a sacred space upon which I could undertake the same challenges and contradictions that all painters have had to deal with historically, such as depth versus flatness, the role of the mark, the function of color.

My work has certainly taken a trajectory towards a personal identity within a cultural one. Being from the American South, I have had to negotiate perception, heritage, and legacy. The canvas surface has become the battlefield for these negotiations. BO: How is the imagery sourced? Do you know the subjects of these paintings? If so does that matter or affect how you approach them?

AL: These images began as an exercise in “painting as documentation” last year when Andy Griffith passed away. I grew up watching “The Andy Griffith Show” like many in my demographic, but I believe I had a stronger connection to what the show promoted because it was set in my home state of North Carolina. In fact, the mythical Mayberry was located within a mile of where I lived, and I grew up hearing stories about the “real” Aunt Bea and Andy Griffith, both of whom lived not too far from were I grew up. So when Griffith passed away, I felt required to address this component of my identity in some way.

Those who watched the show will remember the rare moment when Andy, the great paternal role model, would light up a cigarette on the program. This was harmless enough at the time, but today there is a contradiction in this pairing of the morally astute character and the demonized habit of smoking. I took it upon myself to have a marathon session with the program and document as painting sketches each of these moments. As it turns out, he apparently smoked 13 cigarettes over eight seasons. The sketches were the final artifacts of the documentation process.

BO: It seems like color and the application of paint is crucial here, are the figures just a starting point to investigate painterly concerns?

AL: I believe so. The original idea of “painting as documentation” has been shed in this reiteration of the original series. As I noted before, there was intentionality in attacking this with a more traditional approach than I have undertaken before; in the materials, in the utilization of a “sacred space,” so on. The biggest difference I would say was in my mental approach. When I have painted through preset parameters, I left the results as they were without regard for an aesthetic ending. What came out of these parameters were a specific record of the process.

Thinking traditionally, I had to change my mindset and deal with the image in a tit-for-tat, call-and-response approach. The image had to be consciously dealt with at each stage, the end of that process dictated through the development of the image itself. Colors and marks had to respond to those colors and marks that came before it. In fact, you’ll notice the solid color backgrounds. Those background colors had psychological intentions for the final image, but they also gave me something to immediately respond to as a painter rather than working from a blank raw canvas. The background became the chords by which I could build a melody on top of.

BO: I can’t help but think of Francis Bacon and Lucian Freud in relation to this body of work was their work a consideration before making this departure?

AL: The biggest problem painters today have to negotiate is the fact that when it comes to painting, everything has already been done. A close study of contemporary painting bears this out. This creates a condition that we have two basic options to work from. We can either reinvestigate previous explorations, or we can cite what is already in place in an attempt to cobble together a meaning that is relevant today. As an exercise in identity and psychological framing, there were a few painters that had an impact on my approach including Freud and Bacon, but also Frank Auerbach, the Neo Expressionists, and more contemporary painters like Jenny Seville and Elizabeth Peyton, both of whom utilize the lessons of previous painters beautifully.

For me, there is some irony in the pervasive idea that painting is a dead medium given that “everything has been done.” Creativity has always been about reconfiguring what is already there in new and innovative ways. In this regard I’m not convinced that painting today is doing anything it hasn’t been doing all along.

BO: Could you discuss the importance of scale? If I remember from the time in your studio this summer the works are larger than life size. Are you interested in how color on this scale relates to and effects the body of the viewer?

AL: Absolutely. Scale is the big difference between these paintings and the original sketches that prompted this series. As a sketch implies, the originals were small, intimate, and contemplative. I think this is where I saw more potential from that original concept. With little variation otherwise, I knew that a change in scale would reinvent the series into something overpowering and less voluntary for the viewer. In other words, the sense of intimacy would be replaced with a sense of domination. If the subject of the image is considered an icon or archetype in the same way that any celebrity could be understood, a larger scale seemed more appropriate.

Color became a significant tool in the transition. My use of color has been greatly informed by my working education in graphic design, i.e. the psychological function of color and color relations. I think this explains some of the Pop Art qualities of the paintings. At the same time, the force that colors and color relations have is magnified exponentially when it visually consumes the viewer at this scale. The original sketches were black and white to match the screen image they were replicating. Since replication wasn’t the goal here, bold primaries and secondaries were utilized to reinforce the forceful nature of the image. At this scale, it bold colors do. BO: What are the challenges and difficulties you face making this kind of work in 2013? How do you think they are different to say the generation of painters who worked in this way before you. What is particular about this moment that sets your work apart from them? Or do you see yourself continuing a figurative style of painting that has been heavily influenced by the lessons of modernism?

AL: Painting as a legitimate form of art has been “dead” for 50 years, and there is a schism between painters and non-painters that artists adopt as they are indoctrinated into a higher, more educated level of art practice. It’s a “skill” in an “unskilled” world; It’s self-gratuitous; It’s a commodity supporting the worst ideals of a capitalist system; it ran its course and there’s nothing else it can say. The arguments against painting are always plentiful and are based on an academically agreed upon trajectory. As a painter, I can understand where many of the arguments come from, but this attitude misses the point entirely. Painting is a form of theater, and this form seems to satisfy something that we desire. It satisfies a curiosity we have about ourselves in a language that most of us can interpret in subjective ways.

As a contemporary painter, the shadow of the Modernists looms large over my practice. It’s an ironic situation. On the one hand, I am not tied to a singular pursuit for a universal truth like the Modernists were. On the other hand, the possibilities painting holds have been exhausted. As I noted before, my approach is to plunder the ideas that have already been explored, reconfiguring and recombining what is already there to find something new and valid for the contemporary viewer.

BO: How important is the notion of self-expression to you?

AL: “Self-expression” as a creative endeavor is considered far too passé today as if it is a naïve relic from the Modernists. I agree with the criticisms against self-grandeur, but I believe self-expression serves a different function today. The world is shrinking at an astonishing rate through globalization and there are signs of resistance to the threat of homogenization that today’s condition endorses. Coming from the American South, I grew up understanding the threat of a loss of heritage and cultural identity. This fear is in the genes of Southerners, and it seems that there is a similar concern growing in the larger population.

It’s these conditions that create a particular need for self-expression, especially when that expression takes on cultural allusions. We all want to progress to a non-hierarchical, equal world culture, but it’s a road riddled with uncertainty that is perceived as threatening to our individuality. Self-expression today is just a form of clinging to that identity. It isn’t meant to inflate the individual or deny the identity of others. It is simply a stand, one that stubbornly clings to the value of oneself in a way that cannot be replicated by another, no matter how similar we are or how much the lines of cultural distinction are blurred.

A native of North Carolina, Ashley Lathe began his art career via the commercial arts. Graduating in 1992 from East Carolina University with a BA in Graphic Design and Illustration, Ashley worked for several years in web design and marketing. Following completion of post-baccalaureate classes at the University of North Carolina at Charlotte, he taught art classes at the university level. In 2002, he made the final leap to full-time artist. He is currently a candidate for Masters of Fine Art from Maryland Institute College of Art.

Author Bart O’Reilly is a multi-media artist and adjunct professor at Harford Community College. He has shown work in Ireland and the United States and writes about art and critical theory.