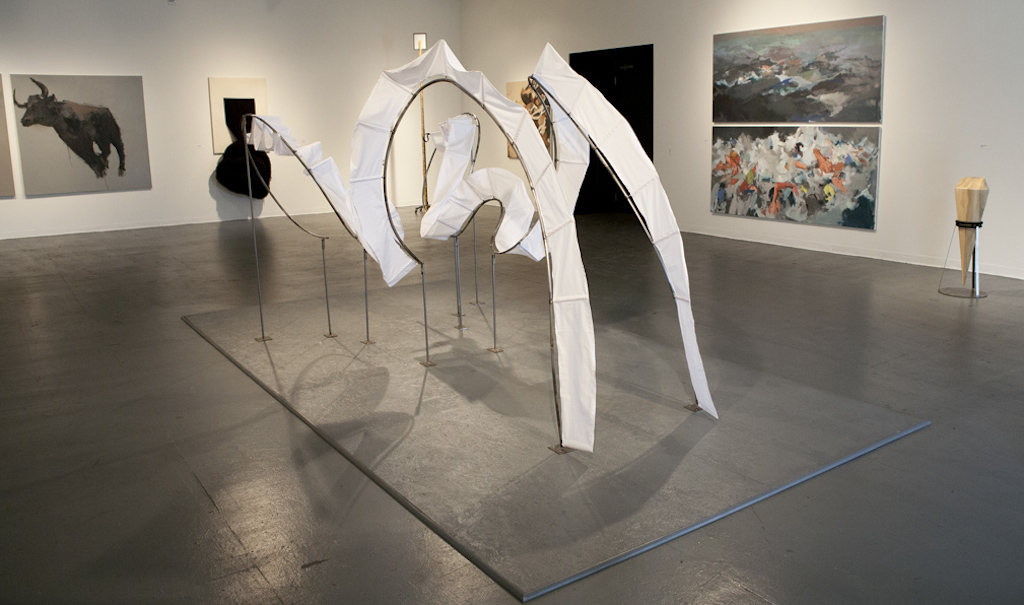 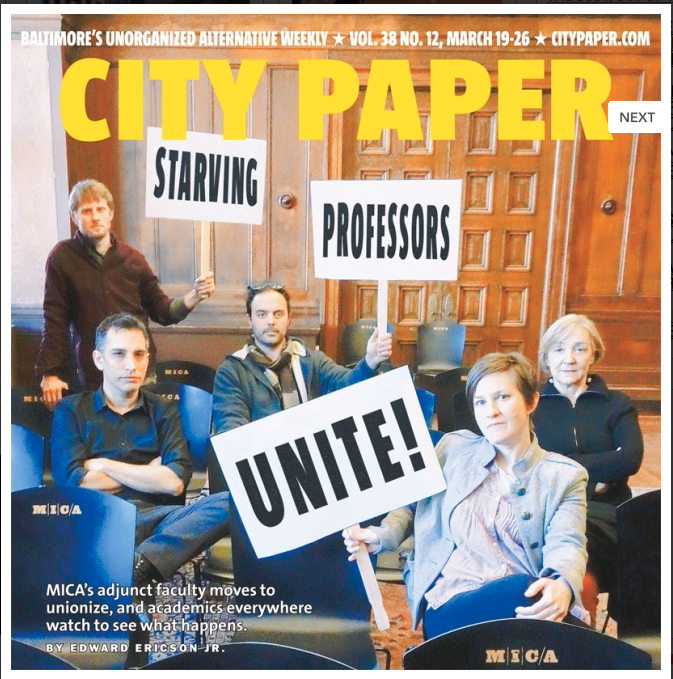 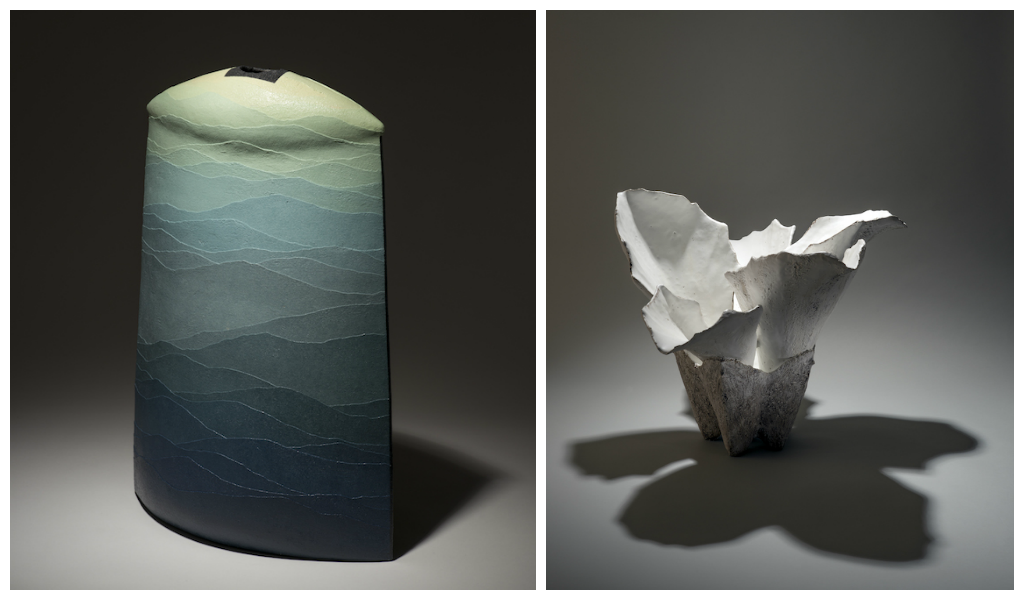 A white blossom of unraveling ribbons cuts a theatrical profile in the first room of The Walters Art Museum’s special exhibition Designed for Flowers: Contemporary Japanese Ceramics. Like blooming scrolls of delicate white paper, the object by Fujino Sachiko toys with expectations of balance and support. It appears to wobble in its glass vitrine, with a wide breast and a tiny foot, as if on the verge of tipping over. Simultaneously heavy and delicate, this ‘star starter object’ was fashioned by a contemporary ceramicist who also happens to be a textile artist. It captures the soft flow of folding fabric as well as the soft fragility of fresh, crusty snow.

The entrance and organization of this exhibit couldn’t be more seasonally appropriate, as Baltimoreans enter a mercurial spring after a brutal winter. Curated by Chief Curator Robert Mintz, the exhibit follows the natural theme of changing seasons and is arranged aesthetically throughout the museum’s U-shaped special exhibit galleries, rather than following an art historical chronology. If the dramatic entrance reflects the chill and refinement of winter, your progression through the exhibit gradually reaches the pale hues of spring, as you head toward summer’s bright colorations.

Although the Walters tends to focus on historical works of art, this new exhibit features contemporary ceramics from the 1970s to the present created by highly respected Japanese potters. All works come directly from the private collection of Betsy and Robert Feinberg and will eventually be a part of the Walters permanent collection of Asian ceramics.

This particular show features vases and containers designed for Ikebana, the traditional Japanese art of flower arranging. However, you will not see a single bud, real or artificial, except for those depicted in paintings; the vessels are deliberately empty so that viewers can imagine this fulfillment of purpose for themselves.

As you progress to the second room, the colors transition to neutral grays and browns and the surfaces of clay objects reflect the rustic properties of the earth that produced them. Each piece in this section of the exhibit was created in a different part of Japan, and each exclusively employs the unique historical traditions of their region. Rich with coarse textures and rough gestures, the variety of works in this room were all made from local clays, fired with native wood in kilns made the same way as those from hundreds of years ago. They represent and manifest the specific colors and properties of the earth that inspired them, as well as winter’s neutrals. On the whole, they are crusty, cruddy, lumpy, and earthen in ways that seem both daring and solemn. One giant stoneware vase sports a busted lip and appears to be damaged. Created by Hosokawa Morihiro, a former Prime Minister who started a career in ceramics after retiring from politics, the piece’s V-shaped crack is not an accident, rather an homage and signature. It refers to a similar technique used in the 14th century, and Morihiro’s adoption of this practice is in line with the sampling from art history that many postmodern artists employ. In the same room, Kohyama Yasuhisa’s Kaze (Wind) vessel, looks like a rough-hewn slab of clay still waiting to be formed. Also made of stoneware, its bent rectangular shape with incised swipes of texture appears to be completely closed except for a tiny crack on top for a stem.

Advancing into early spring, the next room is filled with a gold leaf screen painting from the Walters permanent collection by Kishi Ganku. The piece depicts tigers and dragons in ink that drips as insouciantly as any modern Sumi painter. Although they blend seamlessly with the contemporary ceramics, the paintings were made in the early 19th Century and have never been shown at the museum until now. Coupled with Koike Shoko’s dramatic Shiro no katachi (White Form), which looks like a piece of exploding popcorn, the paintings help to create a Zen garden aura enhanced by surfaces which replicate the parallel lines made by raking sand that represent listening to the sound of waves. Bamboo mats are provided to sit on, establishing an opportunity to carefully absorb the stimuli around you.

In the proceeding room, the surfaces of the vessels transition to become jewel-like, colorful, and much more refined. It is finally spring! Mihara Ken fires each of his small pieces thirty to fifty times, employing new technologies with his stoneware. The artist adds tiny bits to the pot’s surface over time so that colored chips are inlaid and appear like textile wall patterns or the seedy center of a flower. This piece also contains one tiny hole for a single branch. Competing for an even more baroque surface, Kondo Takahiro’s Guriin misto (Green Mist) is a porcelain box whose surface sparkles like a bejeweled snakeskin. The artist uses a secret mix of gold, silver, and platinum, which is melted into a liquid form and then sprayed onto the surface of the clay before firing. The condensation on the surface melts into a delicate beading so shiny you will want to lick it. It is probably best that his works are in a glass box.

As you approach the more ecstatic colors of summer, a Tokonoma built into the wall provides another opportunity for contemplation. Also known as a toko, this type of built-in alcove can be found in many Japanese homes, and it serves as a space for decorative display. In this exhibit, the tokonoma is ‘ideally unstructured,’ with a faux window and a painting situated above Hayashi Shōtarō’s Nezumi shino henko (Mouse Shino Vase). Apparently, the russet color of the vase, mixed in with a bubbling white sheen is a perfect match for the color of the inside of a mouse’s ear, hence the curious branding.

Summer is announced in the exhibit by lush colored surfaces. An exhibition of Japanese ceramics would not be complete without a selection of Celadon glazes and Designed for Flowers does not disappoint. Displayed in a central case, a wide variety of pale hues represent a dramatic shift from the typical green-blue pastel expected. The shapes and surfaces in this part of the exhibit reflect a perfect and ideal aesthetic and most are delicate porcelain – they couldn’t be more different than the works presented at the beginning of the exhibit. Many of the ‘summer’ vessels were created and glazed through new technological means and their innovative processes make them more precious and more remote.

In the final room filled with brightly glazed forms, a few depict singing birds and landscapes, but the most dramatic works are abstract. Yōsai tsubo “kōga” (Brilliant Glazed Jar “Galaxy”) by Tokuda Yasokichi III, is a perfectly round, porcelain bauble punctuated with a tiny straw shape at the top. A white vertical stripe divides the piece in half and gradually fades to intense yellow, green, aquamarine, and royal blue tones that are greatly enhanced by a wet-looking, shiny surface. It could compete with any summer blossom. Most dramatic, though, are the vessels by Miyashita Zenji, which employ subtle gradations of analogous color to resemble sedimentary landscape layers. These stoneware vases are tall and lean and their fragile horizontal bands of transitioning color look more like collaged pieces of ripped paper than clay. They were created through building up layers of different colored clays, and their matte surfaces are soothing and sincere. In many ways they appear to have been made by nature.

The exhibit ends with an interactive opportunity to write and share your own Haiku poem, which might be a culminating creative response or it could be an exercise in silliness. The Walters has also scheduled a number of interactive workshops for those who want to learn more about Ikebana, Japanese traditions, and ceramics outside of the gallery.

Unlike the symmetrical, pedestrian versions we Americans keep under the sink to recognize Valentines Day, proms, and funerals, it must be noted that Japanese vases are considered to be symbolic representation of the earth. This very meta idea has shaped the tradition of ceramics in Japan for centuries, and, in addition to being made of clay, the vessels in Designed for Flowers explore the physical, metaphorical, and narrative properties of their materials in order to manifest aspects of the natural world. Like Ikebana floral arrangements themselves, which are dramatic, unexpected, minimal, and even cacophonous, the vases in this exhibit take on an odd diversity of forms. Designed for Flowers: Contemporary Japanese Ceramics at the Walters is a rare opportunity to experience a sampling of Japan’s finest contemporary ceramics: it is a breath of fresh air and a lush, physical experience.

Designed for Flowers will be on display at The Walters through May 11, 2014. To purchase tickets to this special exhibition click here.

* Author Cara Ober is the Founding Editor at Bmoreart

** All close-up photographs by John Dean, courtesy of The Walters / Install shots by Lu Zhang