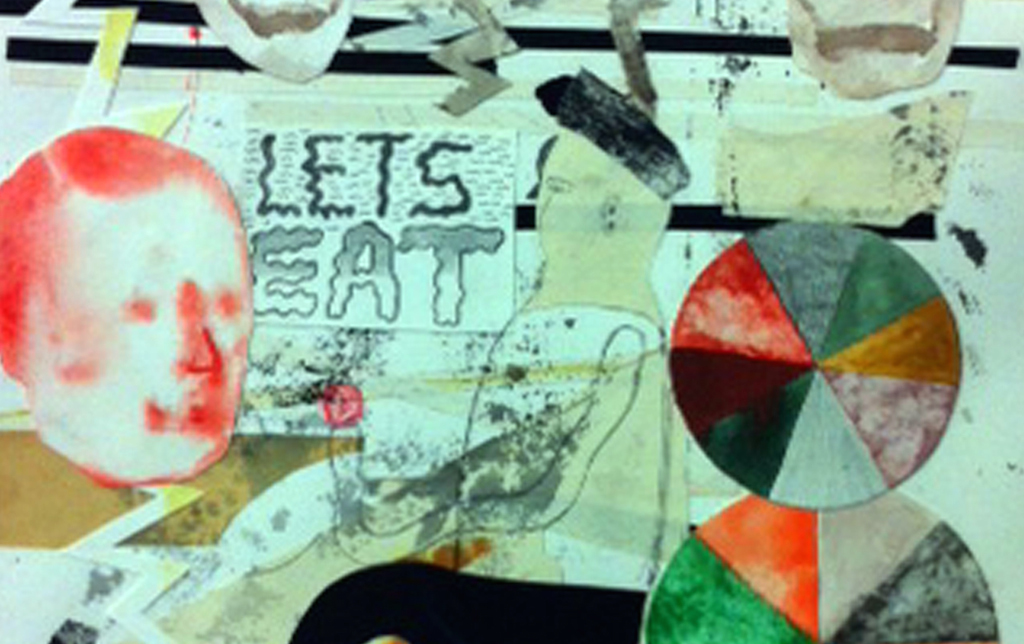 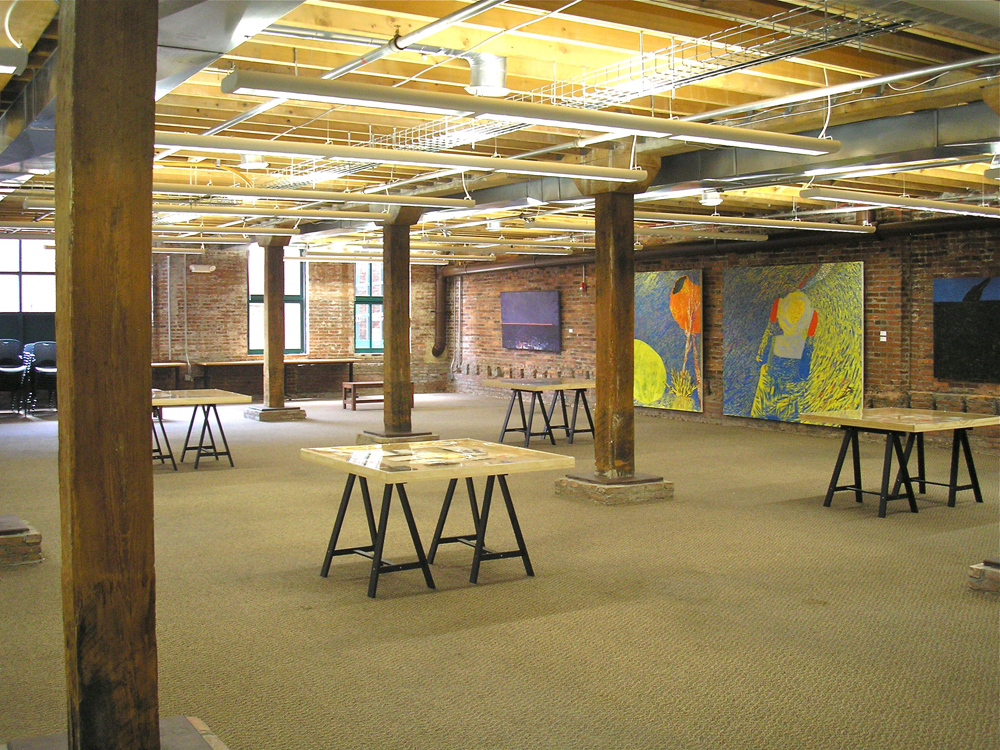 Can a retrospective fully express the enigmatic complexity of the life and work of an artist? Humanoid Boogy, an exhibition of the estate of William S. Dutterer (1943-2007) takes on the challenge headfirst. The show at 1407 Fleet Street is curated by Caitlin Tucker-Melvin as a Masters Thesis in Curatorial Practice at the Maryland Institute College of Art. The large-scale show of paintings, works on paper, and artifacts create a contemplative space for examining Dutterer’s lifelong practice.

Dutterer received his education at MICA, earning his BFA in 1965 and, two years later, his MFA in the inaugural class of Grace Hartigan’s graduate painting program, now the Hoffberger School of Painting. He taught at the Corcoran College of Art and Design for twenty years while he lived in New York City with his wife, Jamie Johnson.

The nature of work exhibited in Humanoid Boogy presents the diversity of Dutterer’s spunky visual language ranging from bold oil paintings, often illustrative and graphic, to smaller drawings and paintings concerned with incised mark making and color relationships. Paintings repeat images of scuba divers, alligators, cranial shapes, and masks; many are bound to resemble mummification. Material concerns, especially in forms that become more sculptural in the 90s, tie together interests in lithography and tattoo design with texture and haptic touch. In these works, Dutterer combines building structures with drawing and painting using media including tempera, gouache, hardware cloth, plaster, and paper-mâché. Curator Tucker-Melvin excavated the artist’s estate to present not only the artist’s life, but the relationships that clarify how content evolved throughout Dutterer’s career. The chronologically and thematically displaced, yet fluid, works present viewers with a format that resembles both a map and puzzle. There is a sense of possibility in the expanse of the work; 200 pieces on are on view. Rather than being overwhelmed, I felt intrigued to know more.

Complementing the large rear gallery are smaller rooms that explore themes in Dutterer’s work such as line, color, surface, material, and scale. These rooms act as thought bubbles, linking together repeated motifs such as ellipses, draped heads, and underwater creatures. Humanoid Boogy captures Dutterer’s active mind and reflects the vitality of a work’s ability to speak, even after artist is no longer with us. The expanse of the show opens up new questions and propels us back and forth through subject, content, and time.

At first I attempted to make sense of the relationship between different bodies of works in the show. The paintings featuring an underwater wayfarer, such as Guide (1984-85), contrast mightily with his abstract works, which are concerned with enfolding a rectilinear shape in on itself. There are numerous drawings of these geometric abstractions, which are mostly untitled works or referred to as “flaps.” These works appear to coalesce in a series of paintings on unstretched canvas where the corners protrude out and become sculptural.

Dutterer’s obsession with the fold in his drawings and paintings from the 70’s is reflective of his time and bring to mind the early work of Dorthea Rockburne. I found myself drawn to Slide (1987), an unassuming oil painting in the corner of a small room in the middle section of the gallery. The painting is a hybrid, incorporating aspects of the marine paintings, but is reduced to an abstract, diagonal shape found again in Below the Horizon, 1986 and the formal works from the mid 70s. A luscious concern for materiality in Slide balances itself with thicker paint of a deep Phthalo blue on the left and warmer tones of blue violet on the right.

After familiarizing myself with more of the work, I found that the diagonal abstract form splitting the painting referenced the snout of an alligator, depicted in several other works. In this example, figurative elements creep into the minimal forms Dutterer would abandon and later return to. This painting also combines Dutterer’s interests in animal forms and the relationship between flat and textured surfaces of paint. After time in the gallery, the shifts in the work that initially seemed spontaneous collide to reveal the artist’s determined and constant search for content.

Artifacts from Dutterer’s studio are exposed in viewing cases throughout the gallery. The show’s title comes from a journal on display titled, Logic + Absurdity = Humanoid Boogy. One of the most curious pieces in the show is a large acrylic painting in the back room, I Don’t Know What To Put In This Space, 1978. This work feels like the culmination of witticisms also found in other works where descriptive words are written to describe kitsch drawings. In this series, play and profundity come together as does the relationship between word and image. The humor seems to speak to the abundance of work in the room, a selection of 200 out of 3,000 works, according to the curator.

Standing directly in front of Profile in Profile, 2000, an abstract form juts out of its support. It is only when standing at an angle that the viewer recognizes the profile of a head. Placed next to oblong abstractions of craniums, this piece is a meditation on the conundrum between identifying the external and internal self. The physical need to walk to see both sides of the protruding head relates physically to the idea that other’s views of us can never be aligned with our own image of self. Dutterer nods at the duality of perspective when he references the Roman god Janus in the titles of other ‘head’ works. One feels the interior limits of the mind bound into itself through the repetition of masked forms and draped heads.

While the depths of the ocean remain one of the most mysterious and unchartered territories to humankind, Dutterer suggests that our cognitive selves remain equally mysterious. His brilliant survey of work, heavily edited and composed by the curator, takes us to a place of contemplation on the inner psyche. Dutterer’s work questions the weight of the mind, absurdity, and the role of the cognitive self in the world. Collectively existential, the undercurrent of his work explores the relationship between experiential understanding and the humbling, yet determined, trudge to articulate these experiences. Humanoid Boogy proves that getting to know an artist’s work can often reveal the urge to better understand ourselves.

*Katherine Gagnon is an artist and writer based in Baltimore, MD.