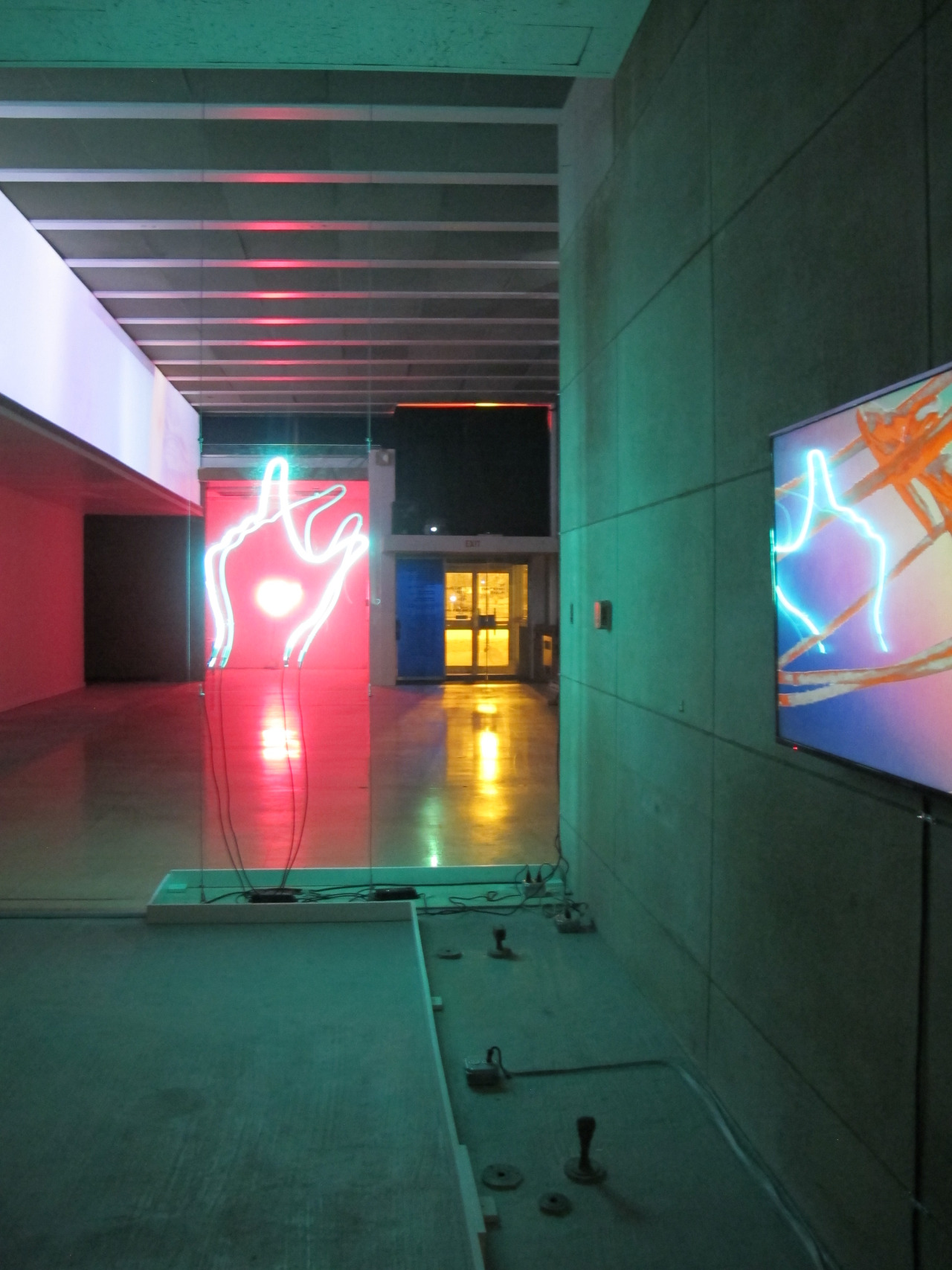 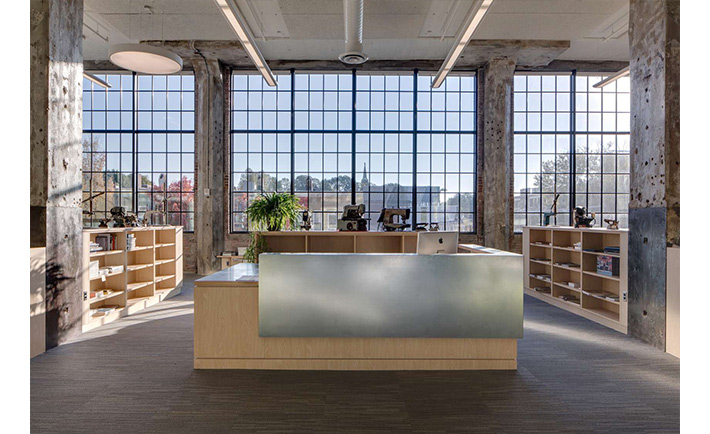 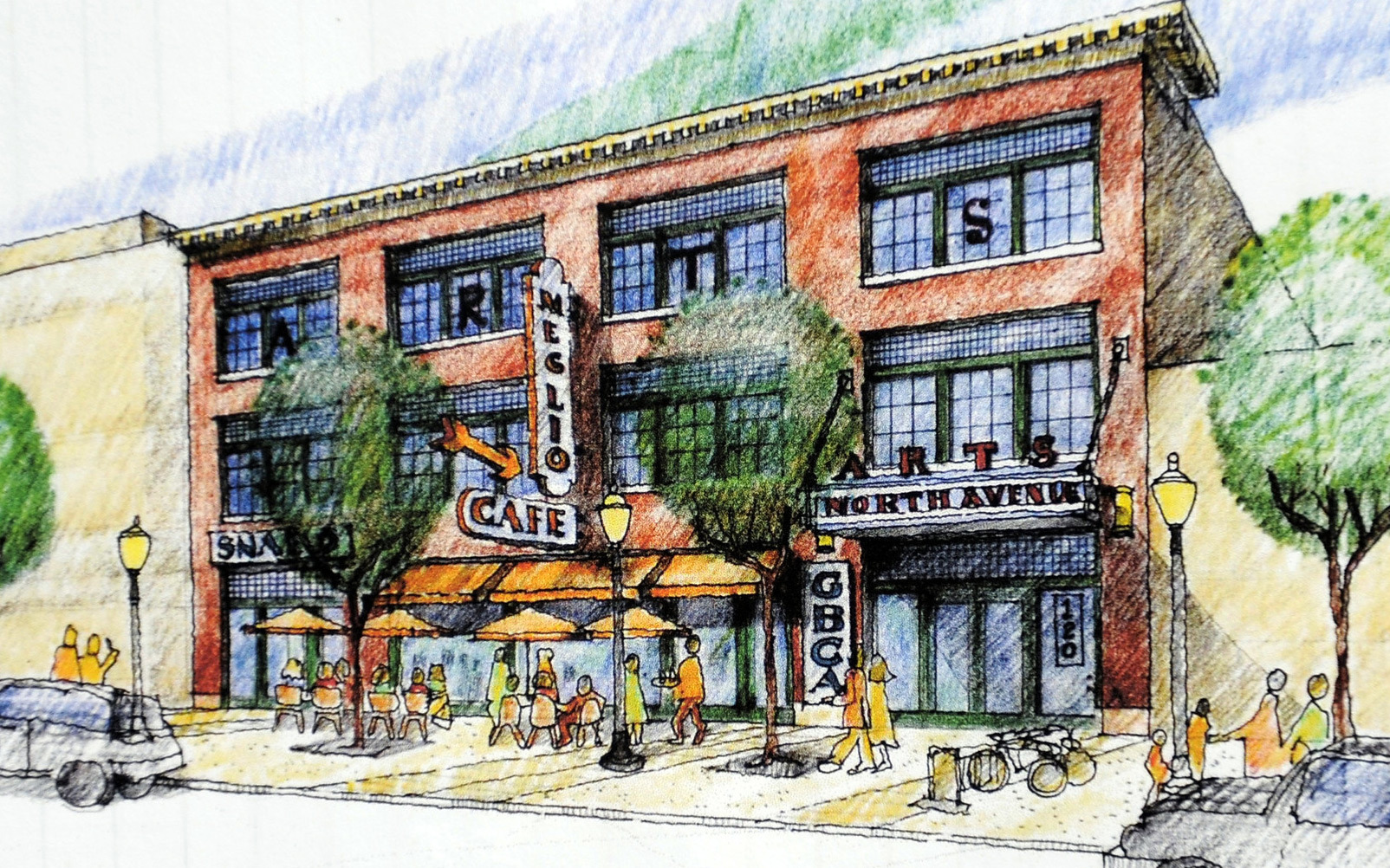 On Thursday morning, March 19, an exuberant gathering of creative professionals, arts administrators, college presidents, entrepreneurs, neighborhood property owners, developers, architects, community members, and artists convened at 120 W. North Avenue to celebrate the start of construction on a new community arts space: The Motor House. The nearly 25,000 square foot building, located between Howard Street and Maryland Avenue, is about to undergo a $6.5 million transformation to establish it as a cultural hub for Baltimore’s Station North Arts and Entertainment District. The Baltimore Arts Realty Corporation (BARCO) purchased the building in 2013 and is planning professional facilities for artists, performers, and nonprofit arts organizations as well as a gallery and 175-seat performance space open to the public.

In addition to BARCO’s $1.5 million equity investment, the property has also received $1.2 million from the Maryland Historic Trust, $1.2 million in long-term financing from M&T Bank, and $550,000 in grants from various programs through the Maryland Dept of Housing and Community Development. Currently, 68% of the funding is secured, with another 32% to be raised over coming months.

At the launch event, stakeholders, community members, and potential tenants celebrated the past and future of the space, listened to speeches, munched on snacks, and walked through the soon-to-be renovated structure. The building’s new name, The Motor House, is a tribute to it’s first resident from 1914: Eastwick Motor Company, Maryland’s first Ford dealership. Over the past century, the building was occupied by a series of car dealerships and later, an office furniture company, before it was bought in 2005 by Sherwin Mark, an artist and entrepreneur. He transformed it into Load of Fun Studios, a much loved, multi-purpose space for artists, performers, and Single Carrot Theatre. LOF was one of the first arts spaces in the Station North Arts District and many believe its presence is responsible for the resurgence of the arts and economy in the neighborhood. The space was shut down suddenly in 2012 due to safety concerns and 30 artists were forced to leave their studios, as well as the community created within the space.

“Anchoring the northwest corner of Station North, The Motor House will build on the legacy of Load of Fun as an arts hub,” says Mac MacLure, managing director of BARCO. “It will be a place that promotes diversity where artists and arts organizations will be co-located. One of the things that I love about Station North is that everyone works together and supports each other to make the community stronger.”

BARCO, funded in part by the Robert W. Deutsch Foundation (as is this publication), purchased the building in August 2013, with the goal of restoring it as a home for artists, musicians, performers, and arts and design organizations to come together. The rehabilitation plans include a bar and restaurant, with a gallery and black box theater on the first floor, artist studios on the second floor, and office and communal spaces for creative non-profit organizations at the top.

“We are working toward completing the renovation by November,” continues MacLure. “Between now and then, we’ll be restoring the historic façade, putting on a new roof, restoring the three skylights on the third floor, restoring the original flooring, installing all new HVAC (heating, ventilation and air conditioning systems), installing a new elevator, removing the existing staircase and adding two new ones, installing a sprinkler system throughout the building, and building a state of the art performance space. We will also be designing the first floor to accommodate a café, although we are still in the process of trying to identify a café operator appropriate for the building and the neighborhood.”

“The development of the Motor House as an arts hub is a welcomed addition to the burgeoning North Avenue Arts corridor,” says local restaurateur Kevin Brown, co-owner of the Station North Arts Cafe and Nancy Cafe directly across the street from the new mixed-use project. “This is evidenced by the attendance at today’s launch, which included threads and swathes of committed art-focused individuals who make up the city’s rich cultural tapestry. The vision of what a refreshed North Avenue might look and feel like is slowly becoming a reality.”

Future studio tenants include artists Geraldine Bullock and Mike McConnell and FORCE, a duo of political activists and artists Rebecca Nagle and Hannah Brancato. A surprise announcement at the event was of a Master Artist studio on the second floor, the first recipent of which will be the legendary Baltimore-based artist Joyce J Scott. Applications are still being accepted for second floor studio space from individual artists and collectives. Six micro studios will be also be available on the second floor at highly competitive rental rates.

Deutsch Foundation senior fellow, Leslie King-Hammond, is working with BARCO to find appropriate tenants for the second floor, and to create an interface between the second and third floors of the building. “The Motor House is committed to creating a safe and accessible environment,” she says. “We want to support the work artists are doing here in Baltimore, but also to give them a platform to be recognized as serious contributors to an urban center that desperately needs an economic boost.” As the building fills with tenants, it is her goal that the artists, organizations, and community will come together to use the space on a variety of collaborative projects and events.

“Baltimore has a great depth and diversity of talented artists who are invaluable assets in its creative economy,” says Jane Brown, President of the Deutsch Foundation. “Too often this vital sector is overlooked and not adequately supported. The Deutsch Foundation is honored to support BARCO’s transformation of one of the city’s historic landmarks into a vibrant and diverse hub for local artists, performers and arts organizations. It is our hope that The Motor House will provide greater visibility for Baltimore’s creative talents locally, regionally and nationally.”

Visitors and participants at the event expressed excitement about the coming reality of The Motor House. “I am especially looking forward to David Mitchell’s work as Founder and Manager of the Urban Arts Leadership program [within the Greater Baltimore Cultural Alliance] doing performance programming in the space,” said Michelle Gomez, a MICA graduate and current Urban Arts Leadership Fellow. “I think that 20 years from now, we will be able to look back and say, ‘Wow – look at how much has transformed.’” Ben Stone, Director of the Station North Arts and Entertainment Inc. expressed enthusiasm for his organization’s upcoming move to The Motor House because it signifies the rebirth of multiple art spaces in Station North. “We’re leaving the Chicken Box because that building will soon be renovated along with the adjacent Parkway Theatre into the new permanent home of the Maryland Film Festival, and we’re moving into The Motor House because of the opportunity to help anchor this important space with a number of our partners,” he explains.

“Few things in Baltimore’s arts community are accomplished unilaterally, and our proximity to so many great artists and arts organizations in the Motor House will facilitate our collaborative approach to our work,” says Stone.

In addition to The Motor House, other major redevelopments on North Avenue include the Maryland Film Festival’s Parkway Theater and The Centre, each of which will house portions of a film program that is a collaboration between Johns Hopkins University and MICA. The Baltimore Jewelry Center will relocate to The Centre once building renovations are completed.

“The Motor House and this whole Station North neighborhood is an opportunity to make things happen in a way people did not think possible,” says Leslie King-Hammond. “We are paying attention and doing a lot of outreach to create a presence that draws from our creative community. We are trying to take this energy and ingenuity that empowers us and channel it so that the entire community benefits.”

Hope Llanso, a 2014 MICA graduate and current Urban Arts Leadership Fellow, attended the Motor House launch party and expressed her hopes for the future of the space. “As a former MICA student, I often stared at this [vacant] building from my studio window,” she says. “I constantly wondered what the future of this space held as it silently screamed with potential. Sure enough, here I am today touring the building and exploring the plans with a powerful group of leaders. Through The Motor House, Station North is welcoming an opportunity that will encourage more collaboration and engagement between artists, students, nonprofits, and community members.”