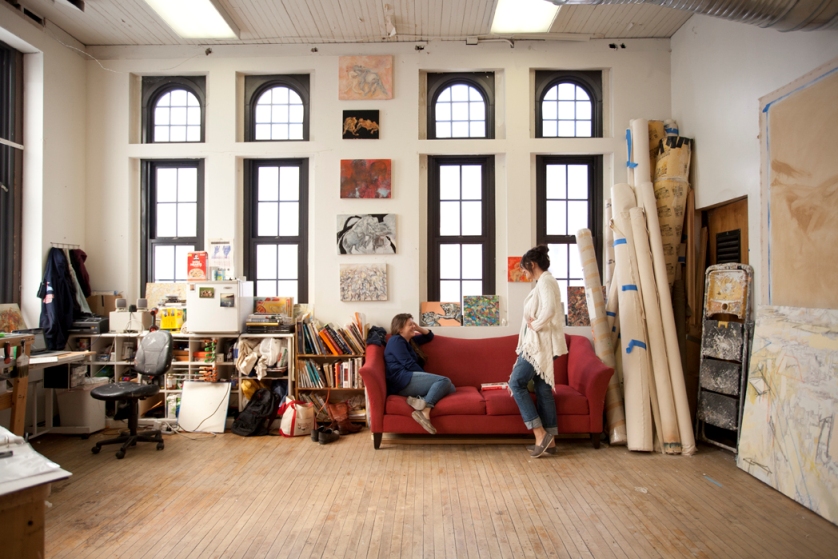 Metropolitan Structures is a new project space located in a private residence in Charles Village. It is run by Philip Tomaru. A recent exhibition, Broken Window, featured artist Sterling Wells from July 10-19, 2015. Although the exhibit took place in last summer, the ideas within the work, as well as the new existence of the gallery, are relevant and worthy of consideration.

Well above the tree line, inside a snug, modernist apartment, Sterling Wells’s “Broken Window” installation occupies the empty living room space. The work is composed of reclaimed auto body parts mounted on a wooden armature, to the approximate scale of an automobile. “Broken Window” is set on the diagonal against a row of picture windows, with the car front facing the view and tilting downward. Except for a few shards of glass and debris on the floor, the work is a self-contained unit poised between assembly and unmaking, a cataloging of parts and relics held in suspended motion. I talked with artist Sterling Wells about his process and the impetus behind the project. Jan Razauskas: Much of your work comes out of interactions with the natural environment, in pieces that position nature and the built environment within the same framework. How did this work evolve out of that interest?

How did you come to connect your ideas for this project with this particular space?

For a long time, I wanted to do a project where I used the car parts the way they are designed, and was waiting for the right opportunity. Philip and I were both interested in the apartment’s windows and how the architecture frames the viewer’s experience. This led to the idea to place an additional framing device in the space. We were also interested in the contrast between the damaged car parts and the Modernist interior. Mies van der Rohe designed this building; it’s lean, devoid of ornament – it must have seemed a perfect foil for this project.

Philip and I spent a lot of time talking about why the building is designed the way it is, and how that relates to cars. To move through the building is to feel like one’s movements are pre-orchestrated by the architecture. Additionally, due to the vast amount of glass, one feels very exposed, almost on display. This is a very different sensation from the comforting sense of privacy and freedom one experiences in a car. The car and Mies’ building present two oppositional ways of living. This opposition expresses itself visually.

Compared with the simple, geometric architecture, the philosophy that designed the car parts appears baroque and decorative. If form followed function, every car would look like a Prius or Tesla. While the surfaces of the interior are perfectly painted walls and immaculate parquet floors, the car parts are damaged from accidents- torn, scratched, and dirty. All these ideas culminated in my proposal to re-constitute the car parts into a car shape, in the space.

The auto parts are held in the approximate positions they assume on a working car. We can even, cautiously, enter the interior through an opening in the armature. Can you talk about the decision to have the interior accessible?

It seemed natural for viewers to enter the car, both to perceive the architecture from within, and to see the backs of the car parts. The sculpture is the porous outline of a car, with the various parts floating in space with large gaps between them. Standing in the car, the sculpture takes on a narrative dimension, as if the car were about to fly out into the landscape.

A poignant aspect of this work involves being able to examine the car parts up close, from all angles, with their dents, defects and road grime. The idea of “car” loses its generic aspect and the parts become specific and personal. They seem to relate to the interior/exterior experience of the human body.

I think a lot about cars as bodies, and how humans are like cars. I think of the car as another layer surrounding the body, augmenting its capabilities. Protecting the body, making it go faster, and heightening its senses. But, the car has its own fragile interior. The insulation inside the car doors is particularly bodily- shapes of foam, and gauzy cotton-like filler are glued and riveted to the plastic. The parts we are seeing are the exterior, the skin- not the functioning interior.

Most of the car pieces used in this sculpture are façade, hiding the mechanical parts of the car. This emphasis on a façade that must be unnecessarily re-designed every year, while the functional part of the car remains largely unchanged, definitely relates to our culture’s emphasis on a technologically designed exterior human appearance.

You mention that you first started seeing the car bumper as a symbol of contemporary life after accessing used parts from an auto body shop near your studio.

The plastic bumper is a decorative cover that conceals the real metal bumper. When the bumper expresses its functionality, as in a fender-bender, the used plastic cover is discarded. It is this wasteful disposability that I find symbolic. This work literally continues the metaphor, because when the show ended, I dismantled the sculpture, and Philip and I disposed the parts in a suburban dumpster.

There is also a humorous ship-in-a-bottle aspect to this piece. Would you care to comment on the journey of the sculpture into this very compact, residential space?

Philip and I had a lot of fun devising a method to bring this material into the apartment. What can be brought in and out of the apartments, and how, and when, is tightly regulated by the building management, so Philip and I had to resort to clever measures in order to realize this unconventional project.

There is a history of artists positioning cars as pivotal in their projects – I think of Chris Burden, crucified on a Volkswagen, John Chamberlain’s auto body sculptures, Lee Friedlander’s photos of America as seen from a car, British artist Michael Landy crushing all of his possessions, including his car – how much of that history was on your mind?

I have found it helpful to position myself against John Chamberlain. Whereas his sculptures are predominately formal and abstract, I am mostly interested in the content implied by the car parts as a material. When I am working with a piece of plastic, I am working with all the forces that created it- the factory, the designer, and the culture that has collectively decided it wants this form to exist. Landy’s Break Down reminds me of Jean Tinguely, who also critiques overconsumption by destruction. I also think a lot about the implications of Tony Smith’s account of driving at night on the unfinished New Jersey Turnpike. This text suggests that the car, and the American landscape designed for cars, is a helpful lens through which to interpret Minimalism, as well as High Modernism. The American experience of the landscape is through the window of a car, divorced from nature.

And what’s next for you?

I entered the Graduate Art MFA program at the Art Center College of Design in September.

Author Jan Razauskas is an artist and writer living in Baltimore.

Sterling Wells received his BFA in Painting from RISD. He will be entering the Graduate Art program at Art Center College of Design in September. Sterling has participated in recent shows at American Medium, Lana’s, and A Slender Gamut. He is currently based in Brooklyn.

Metropolitan Structures is located in an apartment on Charles Street in Baltimore. Invited artists are extended opportunities to present recent work and/or utilize the confines of the space to develop a new project.