Artsy < Hungry: Escaping To The World of Alice Gadzinski 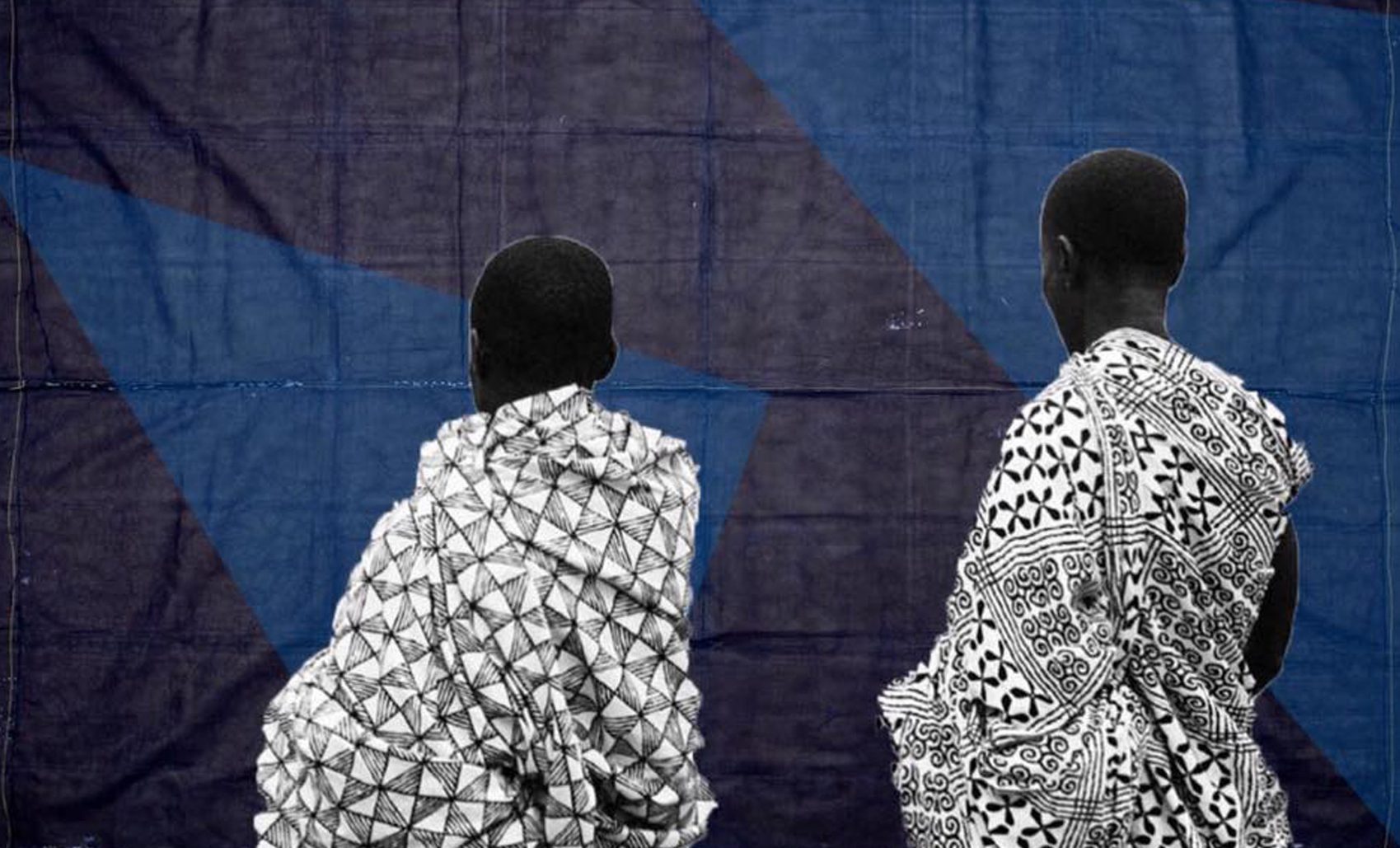 The Magic that is Indigo 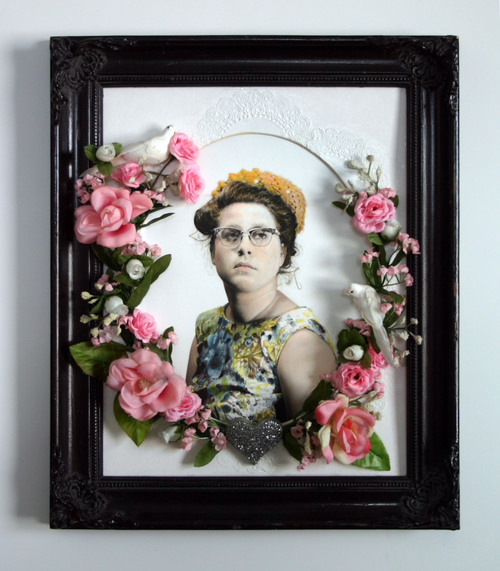 I’m running late for an interview with Baltimore based artist Alice Gadzinski. We are meeting for coffee and pastries at Cafe Poupon, a French inspired cafe in lower Mount Vernon and I am oddly nervous.

It’s strange that I’m nervous because this isn’t my first time meeting Alice. But my guess is that nerves are because this is my first interview for BmoreArt. I’m happy to have my first story be with someone I’m comfortable with but the pressure still remains.

Alice and I recently worked together on a project for my frozen dessert business KarmaPop that was heavily inspired by her work. I created “Disco Lemonade” Ice Pops (Lemonade Popsicles coated in Pop Rocks) and she decorated my tricycle that I use to sell my treats in her aesthetic. The trike and pops made their debut at the most recent BmoreArt Magazine party for the launch of Issue 2 with a very warm reception.

I finally arrived to the cafe 10 minutes after our originally scheduled time (thanks rush hour traffic) and I see she’s ordered a coffee, black. We head back over to the counter to order more treats. I start with the morning special, a Double Latte and Raspberry Macaron with an Almond Croissant.

Then after taking a look at the display case we knew what was coming…. fancy french pastries. We decided to get mix of a few different things and just split them family style: Chocolate Mousse, Pineapple-Mango-Passion Fruit Coconut Cake, Creme Filled Croquembouche, and a Strawberry Napoleon.

Once the drinks and pastries came my nervousness went away and I was ready to hop into our conversation. Since we were eating fancy sweets her most recent pieces came to mind. She has been selling a lot of cake sculptures as of late: cake slices, whole cakes, and jewelry in the form of cake slice rings to be exact. All perfectly frosted with epoxy and paint and finished with a sprinkle of glitter. All true to the scale of actual cakes, except of course, the rings.

KM: So why the cakes? That’s such a shift from your first piece I saw in 2014, the toilet sculpture, “There’s Always Poise”. Why desserts as sculpture?

AG: Well ‘There’s Always Poise’ was about realizing that people walk around like they don’t shit. We all shit, but people don’t want to admit it. Everyone shits…. give me a break! The cakes came later and started when I created food props to be used by Tiffany Lange of Charm City Puppets. I was creating cakes out of sponges and making tons of them as part of my process. Outside of that, everything I was making at that time was very domestic and I wanted to make food that I thought the person in a domestic space would make. AG: Cake is just that but somehow more. Its very decadent. It exists only to be enjoyed. It just fit in seamlessly with my work…. It’s something everyone can enjoy. Kind of like the cigarettes pieces. They are enjoyable but they can also be a vice. Food is something you need to survive but it has evolved into a bunch of unnecessary things. I’ve been watching the Cooked series with Michael Pollan and he talks about how we expect food to look perfect, and how that’s not natural. We expect chocolate not to melt and be perfect because of how its commercially made.

We talked about perfection in art school a lot and I think perfection is attainable but, boring. It’s so limiting in a way. You can buy perfect at a store. I’ve always want to figure out what authenticity means to me as a human and an artist.

Everything is sort of fake at some point. What is an authentic pastry? Is it the process? Is it a caricature in your mind? Is my memory of it authentic? Homemade things made on a small scale feel more authentic to me. I would imagine that if you make things people are familiar with you have to be true to the original. “My work is an unfulfillable pursuit of an “original” through an interpretation of my own definition of authenticity. I explore ideas of taste and the pressures of social performance, examining the present through past ‘camp’ iconographies. My work strives to juxtapose beauty with artificiality, social standards with natural urges, and domestic safety with vulnerability. I am interested in the point of identity formation when childhood pretending evolves into adulthood denial. Through this questioning of façade and escapism I hope to cast a neurotic yet tongue-in-cheek light on our oftentimes-laughable adult existence….Each piece demonstrates a guilty pleasure in the artificial, particularly as it refers to the construction of female identity. In revealing the norm as artifice and facade, my work uses the redefinition of social obstacles as a source of empowerment.”

If I wasn’t fan-girling before, I most definitely was after reading her artist statement. Juxtaposing beauty with artificiality?! Examining when childhood pretending evolves into adulthood denial?! Yes and yes!

I knew there was a reason I wanted to work with Alice for a Karmapop collaboration. Those are key elements in my product development process when making KarmaPop Ice Pops. My ice pops focus on Mid-Atlantic seasonality so that means the flavors are somewhat odd yet reflective of the seasons local produce. So when it’s not berry season, I will most likely not have berry-flavored treats. My thought process in creating these desserts is that it would be clever way to juxtapose the beauty of in season locally grown produce with a typically artificial dessert form. As kids we all loved pops and as adults we could fall back in love with them in a new way but the ingredients themselves are forcing you out of that denial by making you think about how and why this ice pop was made the way it was. Ok. Sold. Even more of an Alice Gadzinski fan.

Our collaboration started off as just ice pops inspired by her work, but that soon extended to the tricycle, then to my outfit, and even a portion of the room around us at the Bmore Art party at Area 405. This collaboration turned performance piece was exactly what I hoped it would be and exactly what I wasn’t expecting. I wore a baby pink outfit with lace and pearls, we even had a bubble machine like The Lawrence Welk Show. Alice’s thesis show drew inspiration from the 1950s program and its “heavy-handed negation of its parallel reality (actual reality).” As she put it in her thesis, “The Lawrence Welk Show is, in its essence, an abstraction of truth.”

KM: I love that your work addresses escapism. It truly makes sense.

AG: Thanks! All of my work comes from that same feeling of wanting to organize chaos but also wanting to escape from reality. All art reflects the world outside of your studio but I don’t want my work to repeat that negative experience. As severe as reality is, the escape has to be sometimes just as severe to find that balance.

KM: The performance piece was fun to be a part of and I have to say, it was fun to retreat to the 5 year old inside of me that loved the wardrobe switch from my everyday grays and black to pink. Oh and what’s up with the pink? I mean, I like pink! I think it has its place. I wouldn’t wear it too often but I like the use of it in your work. Any push back on its use from critics? You used baby pink and baby blue a lot for our collaboration.

AG: My parents raised us in a very gender fluid home. They made a point to not buy me barbies. But I made it clear that I liked frilly pink dress. I’ve always loved fancy dresses as objects. That ended a bit in High School. By the time I got to college I was that hardcore feminist that was almost anti-pink. I’ve heard people say pink is anti-feminist but whatever. You don’t have to have hairy legs to be a feminist. There’s more than just one way to be a feminist.

Pink can be seen as fragile and passive, but it’s a color that can hold a lot of preconceived ideas. Assemblage works in that way too. The pieces all come together but they have their own existence other than what they are used to create. Pink works in the same way, it makes its own statement but also adds to a piece. I think most pastel tones are a bit sarcastic and add to the experience.

KM: Do you see yourself doing more performance pieces in the future?

AG: They’re calling themselves French. They’ve hit it on the head a few times with the seats and tables but then you see the cafeteria style trays and plastic milk crates in the window with potted dying poinsettias inside of them and it’s June. Like the tricycle (from our collaboration), you see it and you’re like whoa! The assemblage part is the wow factor. But when you spend more time with it you see the roses are made of bubble wrap and the side is made of chicken wire. That could add to or take away from the experience.

KM: So you’ve been to France?

AG: I’ve been to Marseilles in the south of France and actually it’s a lot like Baltimore. It’s a port city with its share of problems, crime being one of them, but it also has a great art scene.

KM: I know you’re from Michigan but do you draw inspiration from Baltimore at all for your work?

AG: Yes I’ve always loved Jon Waters as a child. I feel like he nails parts of Baltimore in a very unapologetic way. I feel my work has found its comfort zone in baltimore. It makes sense here.

Can Be Found This Summer: Settling into her residency at The Creative Alliance and teaching a Food Sculpture workshop at the American Visionary Art Museum.