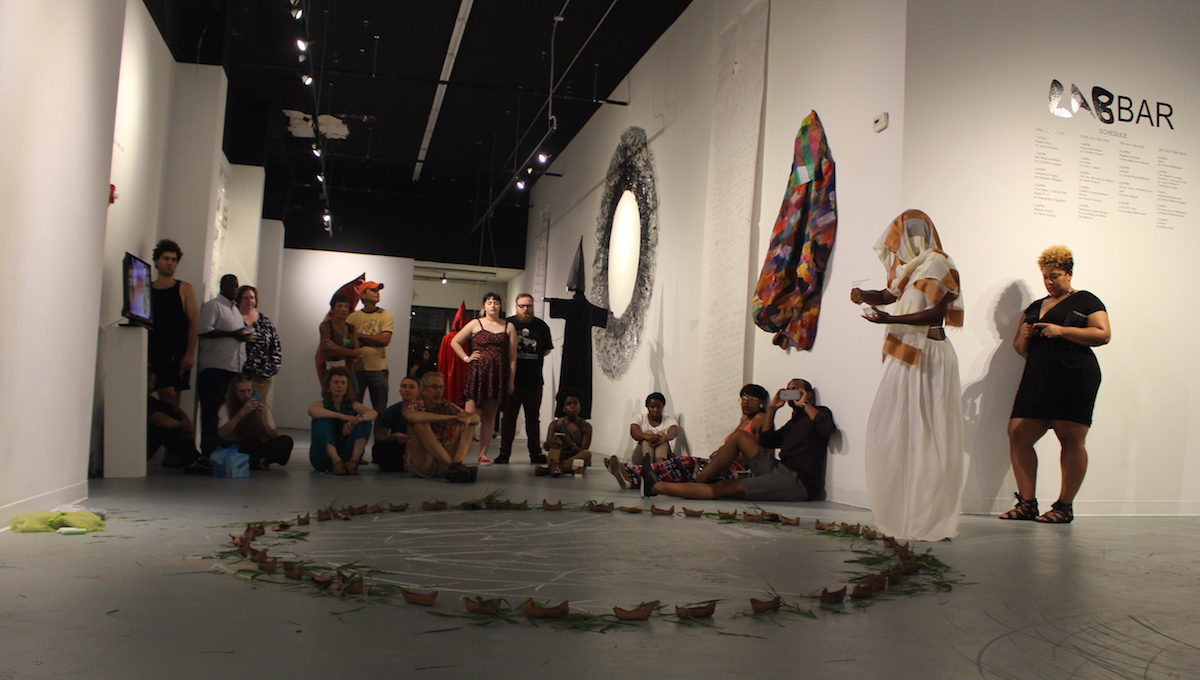 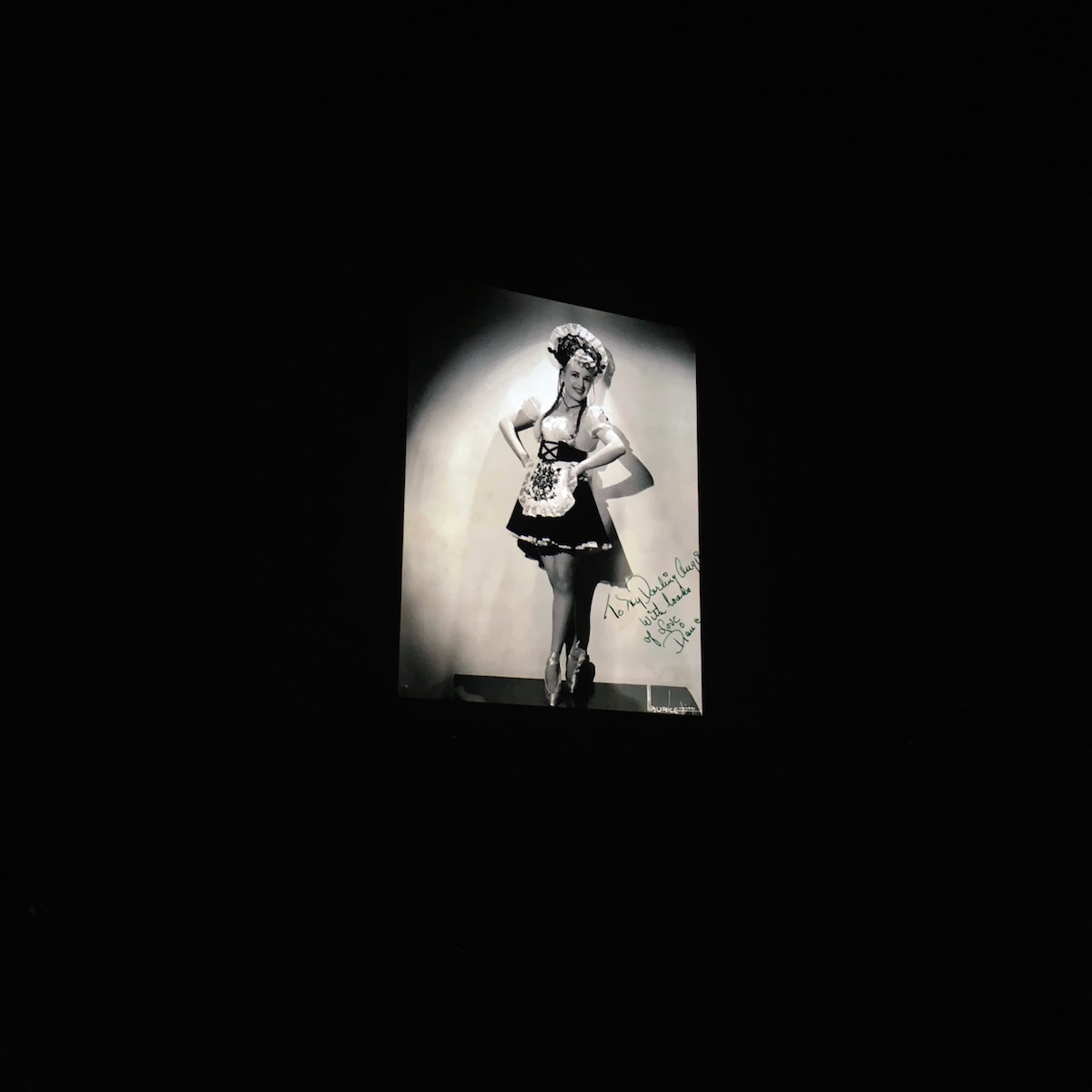 Retrospective: A Performance Art Review presented by Labbodies at Spacecamp was the second annual event of its kind. Over four evenings, twenty artists enacted performances that had previously been presented in and around Baltimore. Seven additional artists’ work was represented through installations of ephemera and documentation of previous performances. Laure Drogoul
I found it noteworthy that the curators’ selection of performances that evening were by women artists who were predominantly of European descent, where all of the pieces took place in proximity to installations of performance ephemera, much of which was racially charged.
The objects and videos that comprised the installations provided a context for the performances in which the usually invisible whiteness of the performers was foregrounded through its contrast to the physical environment, hinting at other performances happening on the other three nights. Christine Ferrara “Cave of the Winds” Ferrara presented a slide show about her family’s history. She chronicled her grandfather’s early childhood in Italy and how he came to be the owner of supper clubs in Chicago in the 1930s and 40s. Often the supper clubs only served spaghetti and presented three performances a night by various comedians, burlesque dancers, musicians, and at times roller skating little people. Dressed like a Laura Ingalls Wilder heroine wearing a gas mask, Laure Drogoul entered a darkened performance space carrying a single lit candle. Viewers were compelled to follow her to the front of the gallery where she sat at a table arranged with the equipment needed to produce .38 caliber lead bullets intended for a civil war era revolver.

After silently making enough bullets to go around, she stood, and one by one placed bullets into the hands of the viewers. She then exited to the rear of the gallery. Drogoul originally performed this piece at the Phoenix Shot Tower as a part of the Carroll Museum/Current Space exhibit Hope Against Hope. Bales’ performance began with her seated in a chair wearing a white lace frock and holding a white bowl of white balls of dough. Next to her on a pedestal was a jar and beneath it a sign with “I will eat your sins” scrawled repeatedly in handwritten cursive. Below that message, a simple $1 price indicator.

Participants who placed a dollar in the jar were invited to sit in the chair while Bales knelt before them, and dipped a ball of the doughy food substance into a black bowl of black liquid. She then stared into the eyes of the participant as she ate the food substance while the dark liquid dripped down her chin and onto her hands. In Chanan Delivuk’s “untitled (a meal between friends)” two participants at a time were invited to sit at a table. On the table, a video monitor requested that the participants please sit for the duration of the video. Then Delivuk, dressed in an apron, began to serve the participants chocolate crepes, coffee, and liquor.

At this time, the video showed scenes of a table in Croatia where people were eating the same meal. On the wall hung a photograph of a sign indicating a Croatian town called “Delivuki” named for the artist’s family. In “Rainbow & Heart Bridge,” small colorful clay objects were arranged on the floor in the corner of the gallery space. Early in the performance, the toy-like objects were positioned to spell “North Howard.” Then, Wang and Doroshenko donned tall rectangular cardboard hats between which a red heart-shaped Mylar balloon was attached.

They scattered the objects on the floor, and proceeded to walk carefully around them stopping occasionally to high five one another. At one point, they took off their hats and placed them on the floor, creating a kind of string archway held up by the balloon. Author Bonnie Crawford Kotula is a Baltimore-based artist and professor. Her studio practice is part science experiment, part meditation, and part mischief. Employing both cerebral and sensual faculties, she makes sculptures and installations that combine tiny blinking electrical circuits with simple materials. She free-form solders the circuits into sculptural compositions and then augment them with art materials, brightly colored trash, and cheap craft supplies. The resultant amalgamations respond to the environment, signaling tenderly and playfully to the viewer.

You can check out another review of Labbodies that covers different nights and performances by Angela N. Carroll here.