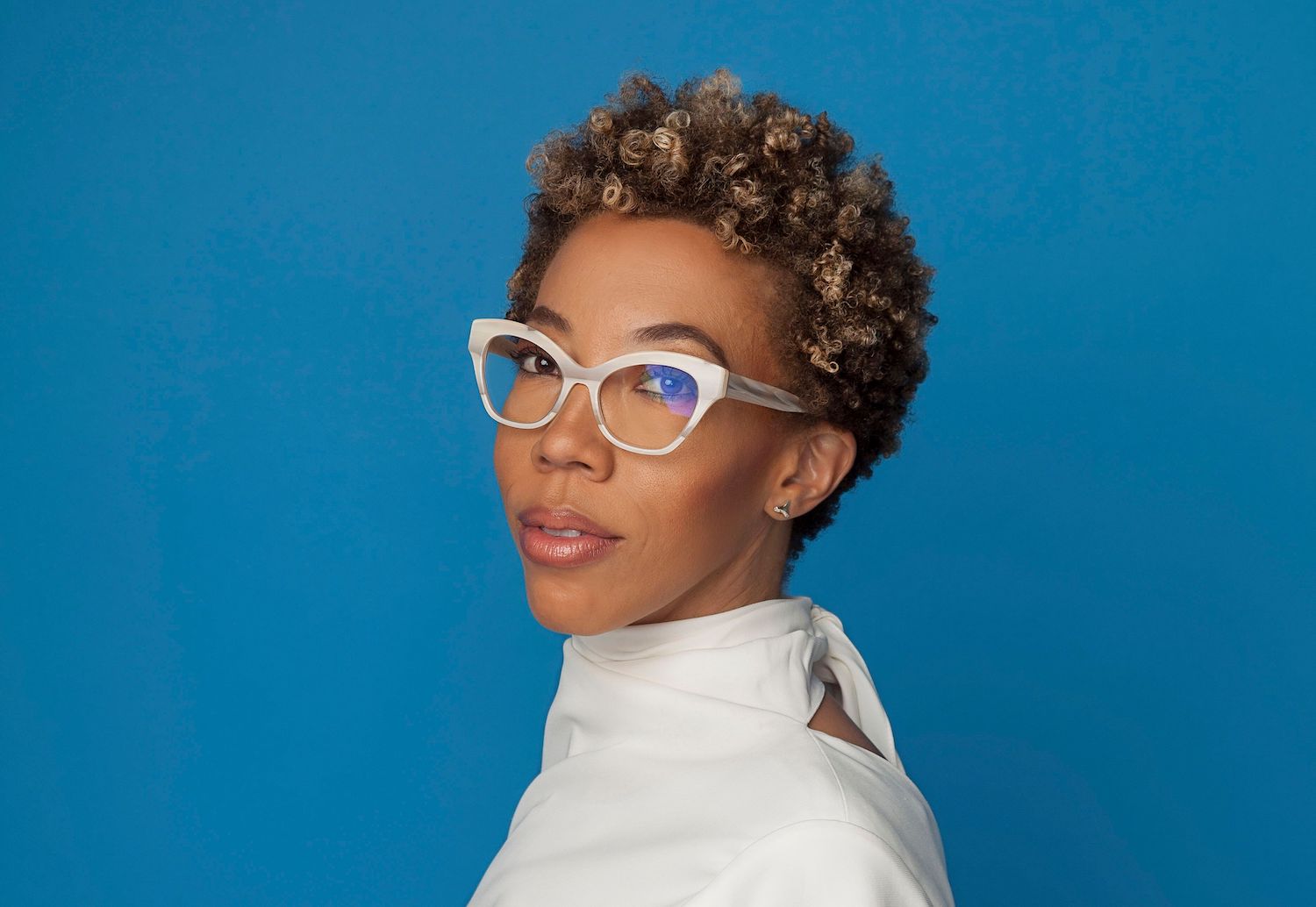 A Sense of a Human Connection: The Work of Amy Sherald 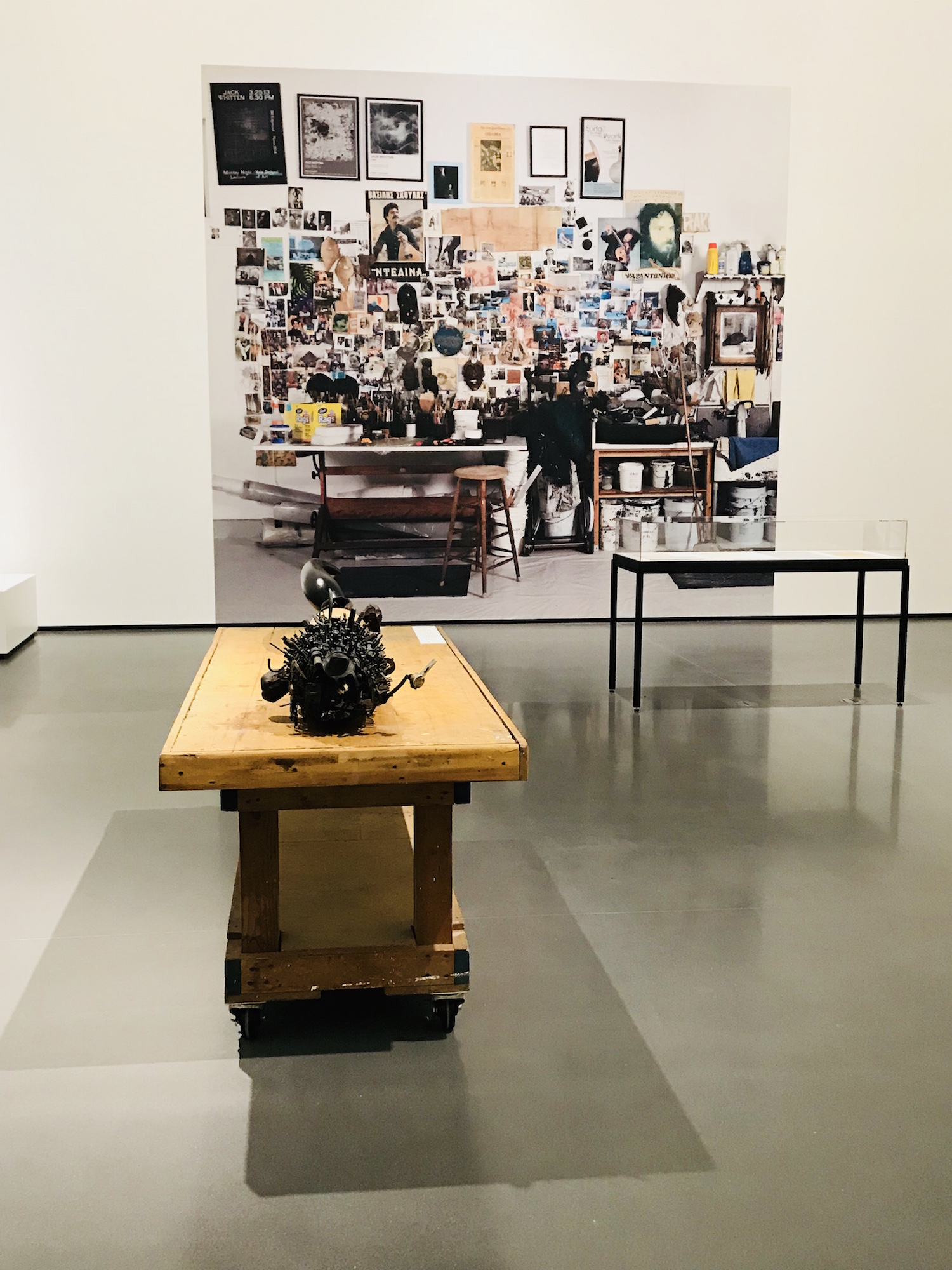 “The mosaic laying is a form of painting that reflects the materiality of paint as medium and painting as practice.” – Jack Whitten

Throughout his career, Jack Whitten was a consummate innovator who explored and refined new techniques to visualize what he called “symbolic abstractions.” Rather than subscribe to traditional narrative painting formulas, or the idea that a painting must illustrate a particular idea, Whitten focused on the materiality of the paint and the process of making the artwork to construct meaning. Using a unique style of cutting small acrylic fragments from larger acrylic slabs into “tesserae” or tiles, Whitten created dense abstractions that function like mosaics and expand the contextualization of Black portraiture beyond representational figuration. Although he graduated from Cooper Union in 1964 and taught painting there from 1974-95, he did not gain significant fame until near the end of his life. Whitten recently passed away, at the age of 78 in January 2018.

Whitten’s contributions broaden the purpose and modalities of Abstract Expressionism, a field most notably recognized for its white male icons like Mark Rothko, Willem de Kooning, and Jackson Pollock. He and other classical Black abstractionists like Howardena Pindell, Ed Love, AfriCobra, Norman Lewis, Sam Gilliam, Mildred Thompson, and Alma Thomas queried the intersections of abstraction and Black identity. Despite the prolific accomplishments of those artists, very few of them are still alive to reap the benefits of the art world’s new-found appreciation for Black abstraction. Contemporary abstract artists like Julie Mehretu, Adam Pendleton, and Mark Bradford stand on the foundation laid by their contributions. 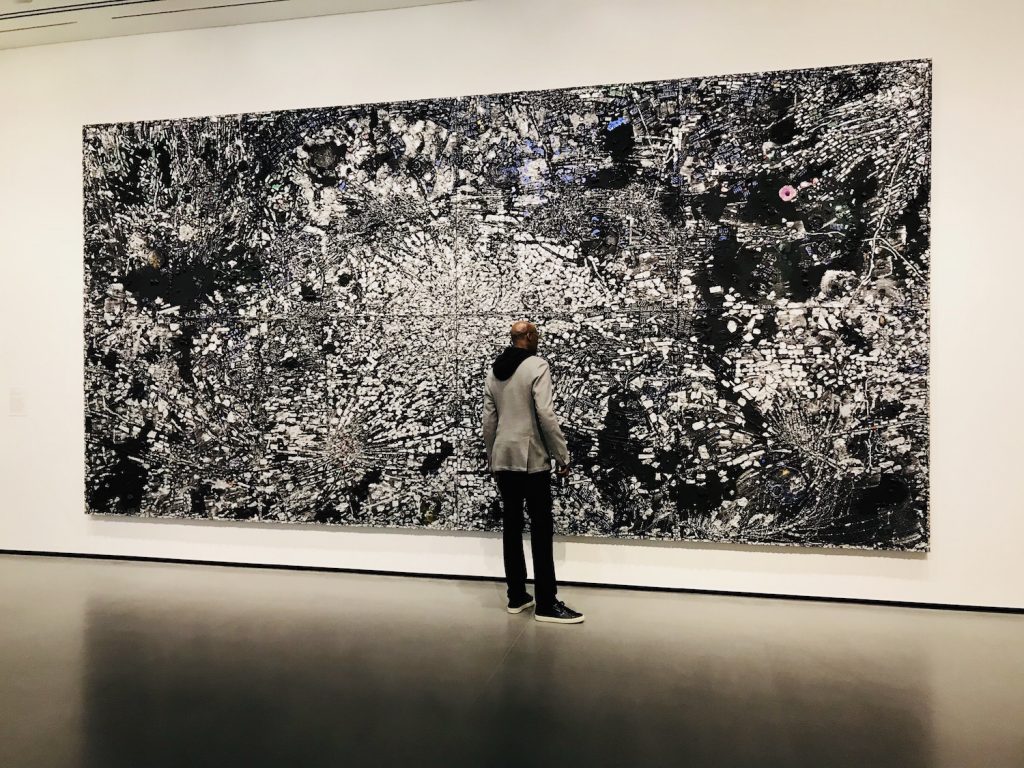 What’s most interesting about Odyssey: Jack Whitten Sculpture, 1963-2017, a traveling retrospective co-organized by The Metropolitan Museum of Art and The Baltimore Museum of Art, is that for the first time ever, Whitten’s prolific painting practice is accompanied by an extensive collection of previously unexhibited sculptural works. The 40 sculptures, which fill two large galleries of the BMA, don’t immediately seem to have much in common with his paintings. But, after viewing the stunning array of monumental works it becomes clear that the sculptures employ the same additive method as Whitten’s most famous “Black Monoliths” painting series. Each of the selected paintings and assemblages in Odyssey draws from expansive African Diasporic pasts and immortalizes optimistic visualizations about Black futures.

Whitten’s abstractions are more than stoic art objects, they are potent figurations that compound time, mythology, and history. The collection showcases the evolution of Whitten’s process and use of materials and celebrates a lifetime of creative genius. 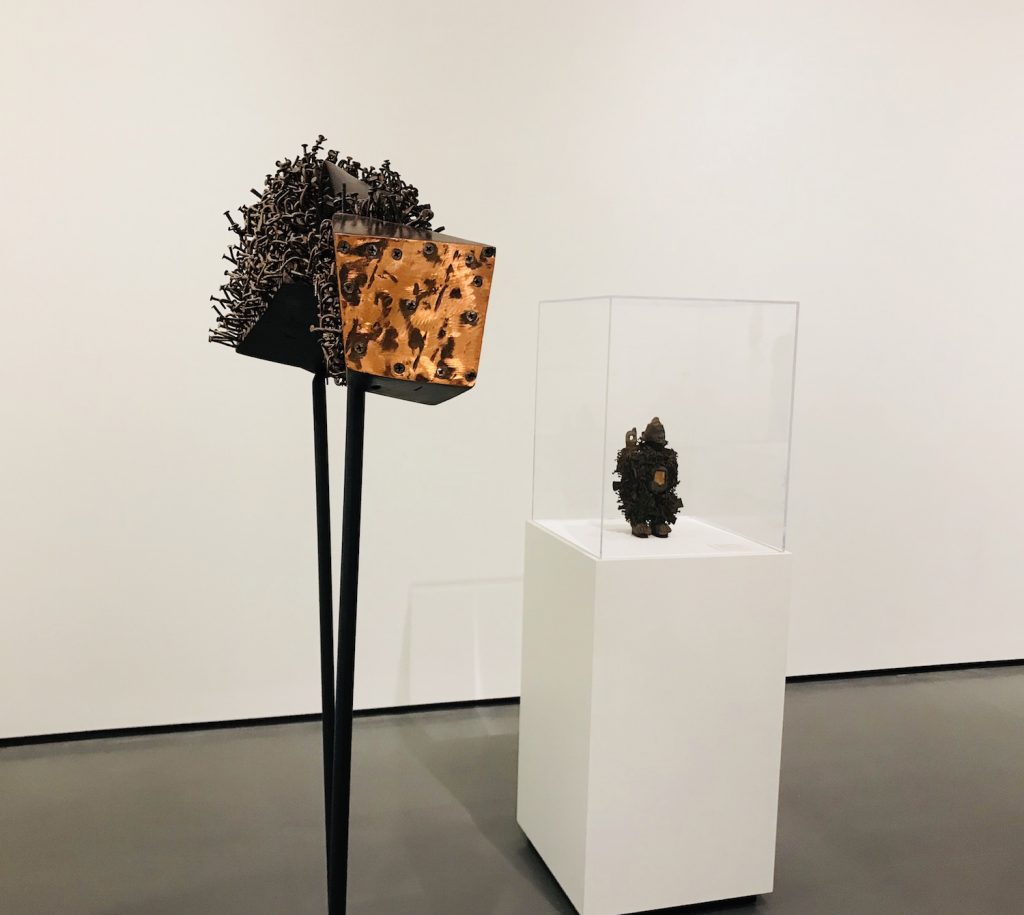 One can only speculate why Whitten’s sculptures were never exhibited during his lifetime. The artist lived a charmed life full of epic explorations and studies of history, culture, and mythologies about the places he traveled to, like Greece and West Africa. His adventures, friendships, inspirations, and loves are encapsulated in his sculptures through the incorporation of a hodgepodge of materials: wood, metal, glass, acrylic, and other found or made objects. The pieces are charged with spiritual intention and weighted by titles like “Bush Woman” (1974-75), “The Afro American Thunderbolt” (1983-84 ), or “The Guardian I, For Mary” (1983 ), among others, that explicitly ground the work in African spiritual sciences and liberation histories. Those distinct decisions to orient his abstractions in Black aesthetics could have limited his access to white art markets, who, at that time, were less interested in collecting exploratory works made by African American artists.

Whitten understood the implications of appropriating and re-activating ancient tools, African and Greek artifacts, to create new protective totems. “The African pieces speak to me directly,” he says in gallery wall text. “I feel their presence and I can see their use value for me today.” Antiquities from the BMA, Walters, and MOMA are exhibited alongside Whitten’s sculptures to illustrate some of the traditions that influenced his designs. 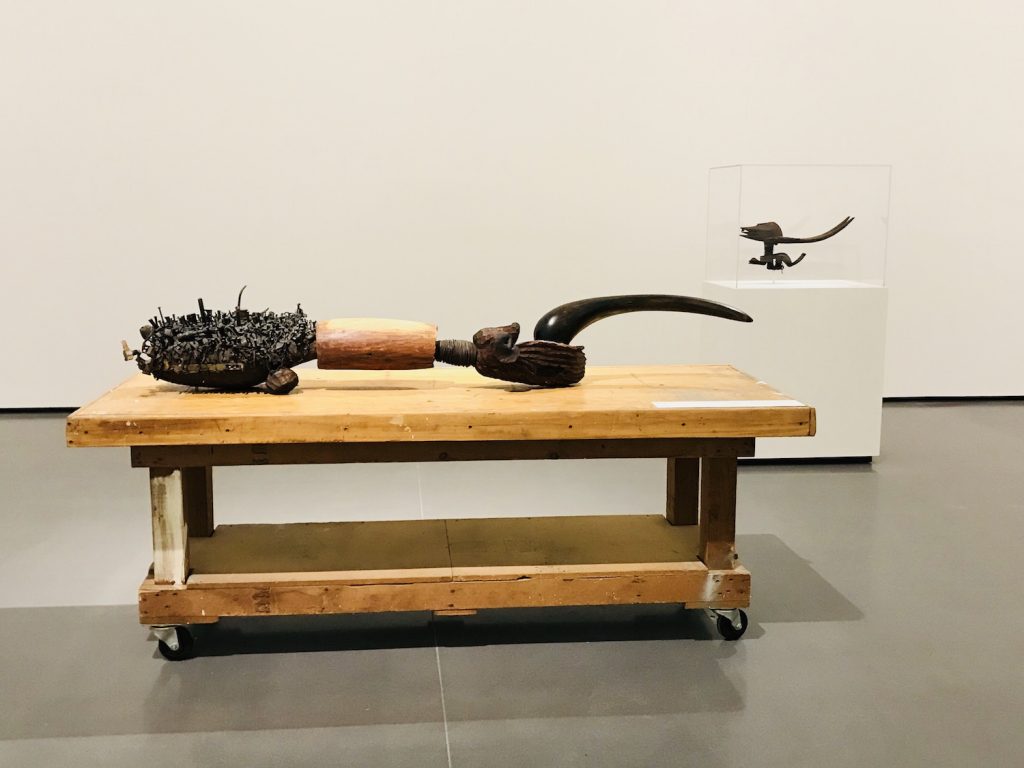 Upon entering Odyssey, “Homage to Malcolm” (1965) a dense mixed media sculpture composed of elm wood, coiled wire, nails and other materials, is one of the first sculptures you will see. Whitten composites wood and metal objects into an elongated horn-like form that recalls Malian and Kongo sculptural traditions invoked to make ceremonial headdresses and protective power figures (Nkisi n’kondi). “Malcolm” was rendered the summer following the brutal assassination of Civil Rights Activist, Minister Malcolm X. It is fitting that Whitten would engage African traditions to eulogize the activist known in the later part of his life for his veneration of Pan-Africanism, a collective Diasporic understanding that connected African Americans with continental Africa, South America, and the Caribbean. Whitten’s adaptation of sacred traditions to memorialize Malcolm X reveals his respect and admiration for those willing to sacrifice their lives for the sustained freedom and protection of Others.

In wall text he notes, “My involvement with all of these geometrical objects is the transformation of them into spiritual objects to be used in the ritual of survival within a technological society. I am sure that any sane individual will agree with me of the necessity of such an object.” 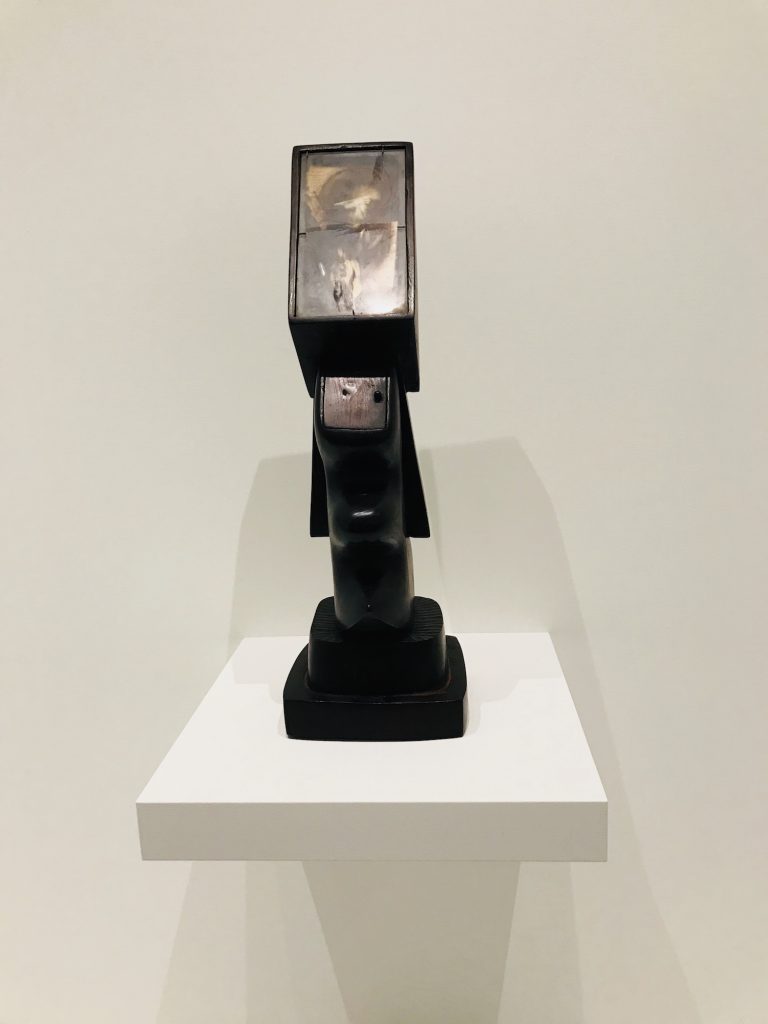 “The Guardian, I For Mary” (1983), a mixed media sculpture composed of black mulberry, his wife Mary’s hair, and window glass, is installed in the next room and surrounded by other sculptures from the Crete and Guardians collections. The sculpture was created as a protective tool, a ritualized art object, for the artist’s wife. The resultant work resembles an elegant anthropomorphic shrine; delicate objects encased behind glass tilt backwards like a head looking up towards the sky held by a beautiful carved wooden base that plumps and curves like a woman’s body. Works from the “Ancient Futures” and “Blades” series are installed nearby. Many of the works in “Ancient Futures” were inspired by the prolific pianist, composer, and Afrofuturist Sun Ra. The series draws parallels between sacred objects from the past and imagined futures.

“Quantum Man (The Sixth Portal)” (2016), a marble, wood, lead and mixed media creation, does not depict any specific or easily identifiably form, rather it references easily recognizable objects like computer motherboards, bones, plastic fragments, and obsolete motors to situate the work in history and the future embedded into a rectangular mixed media block. A blue circular disk, like an eye or a portal, opens at the center of the block. A tall knife-like white marble structure cuts into the back of the block and towers above it like an antenna. The whimsical object brings to mind technologies that a character from a space novella might use for inter-dimensional travel.

In wall text, Whitten explains, “We are a multidimensional people… The African belief system accommodated multiple notions of reality existing simultaneously. This allows me access to the ancient and the contemporary at the same time.” Sculptures from the “Ancient Futures” series meld African cosmologies, African American liberation efforts, and astronomy in profoundly imaginative ways. Whitten continues, “How I make the sculpture, the essence of it, transfers into the painting.” 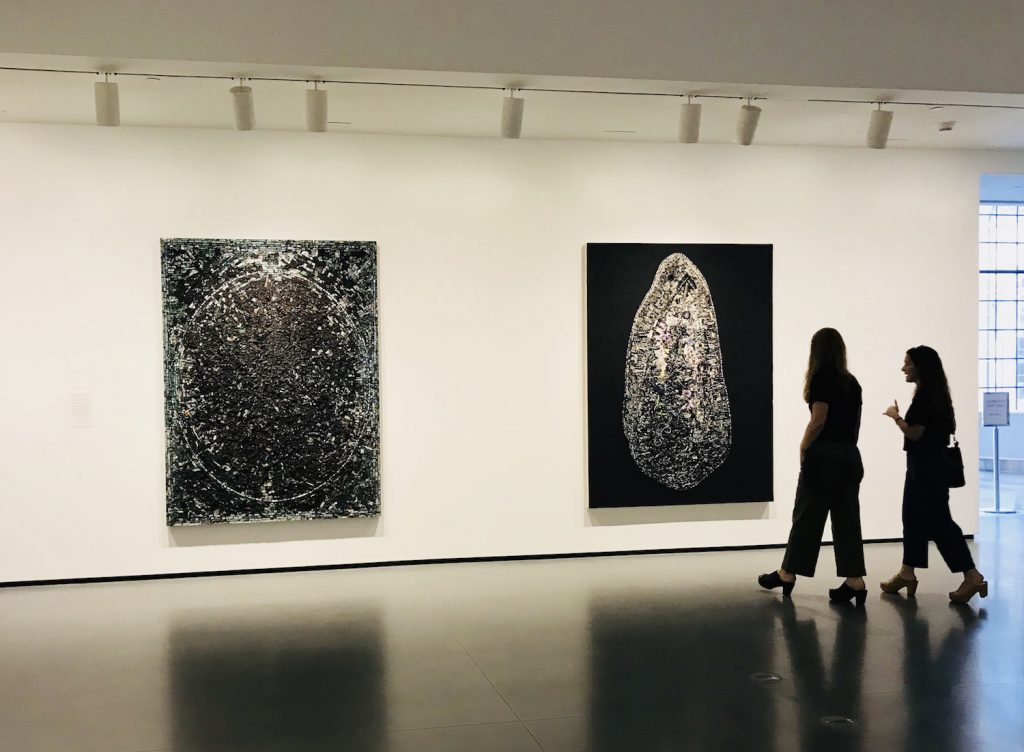 It is interesting that Whitten never considered his paintings to be traditional paintings, rather, he preferred to call them constructions. The continuation of his sculptural processes into painterly assemblages are especially pronounced in his most well known painting series, “Black Monoliths,” which memorialize African American icons. These works are exhibited in the last of the three galleries. Visionaries like Dr. Maya Angelou, Dr. W.E.B. Du Bois, Édouard Glissant, Terry Adkins, and Muhammad Ali are immortalized as immersive Astroblack planes. Each work is inset with tesserae arranged in intricate designs that reflect the light and sparkle like galaxies against the dark background.

“Atopolis: For Édouard Glissant” (2014) the largest work in the series, is an epic abstraction befitting Glissant, a novelist, theorist, poet and scholar who spearheaded and championed the Negritude Movement developed by Aimé Césaire. In the years that preceded colonial rule of African countries, Negritude spoke to a critical need for continental Africans, and the world, to recognize the intellectual and creative genius of Africans. 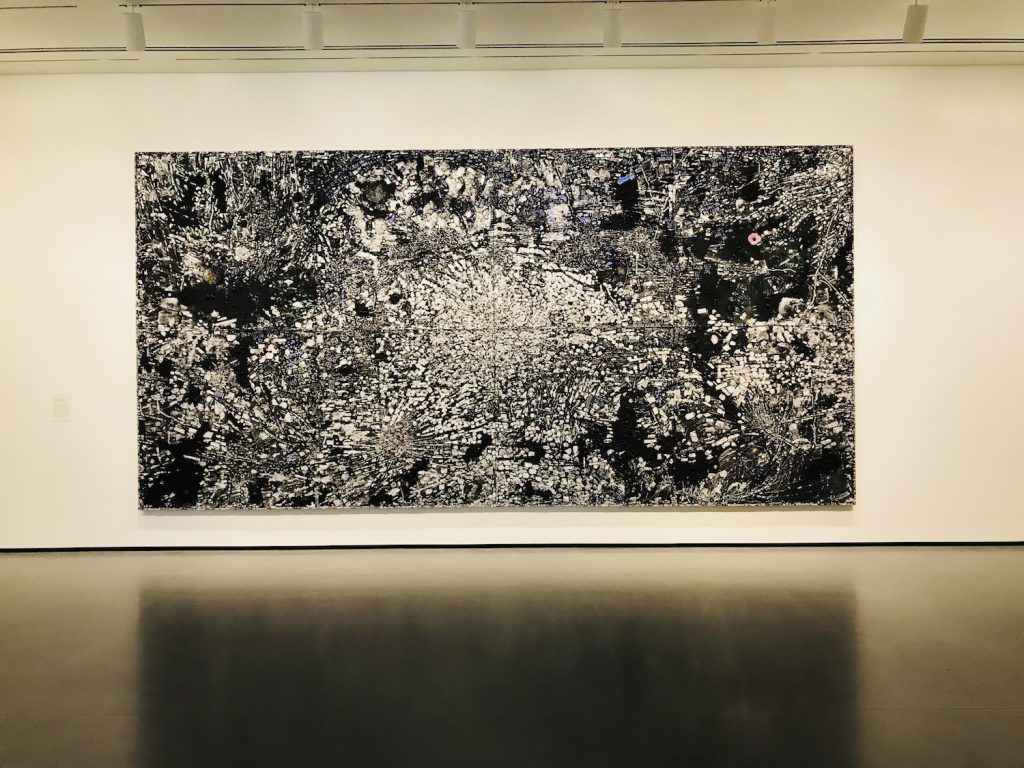 “Atopolis” is a beautiful homage to Glissant’s immense vision. In it clusters of chrome and blue acrylic tiles are arranged in sweeping patterns that mimic aerial geographies. The patterns and color scheme Whitten uses evokes NASA photographs from space of the world at night, whole countries reduced to a dark landmass of distant flickering lights.

Standing before the work is awe inspiring. Up close, one can see the intricacies of Whitten’s detailing, as he laid thousands of small acrylic pieces by hand. Stepping back from the work provides new perspectives, a broader worldview, referencing the global impact of Glissant’s work. 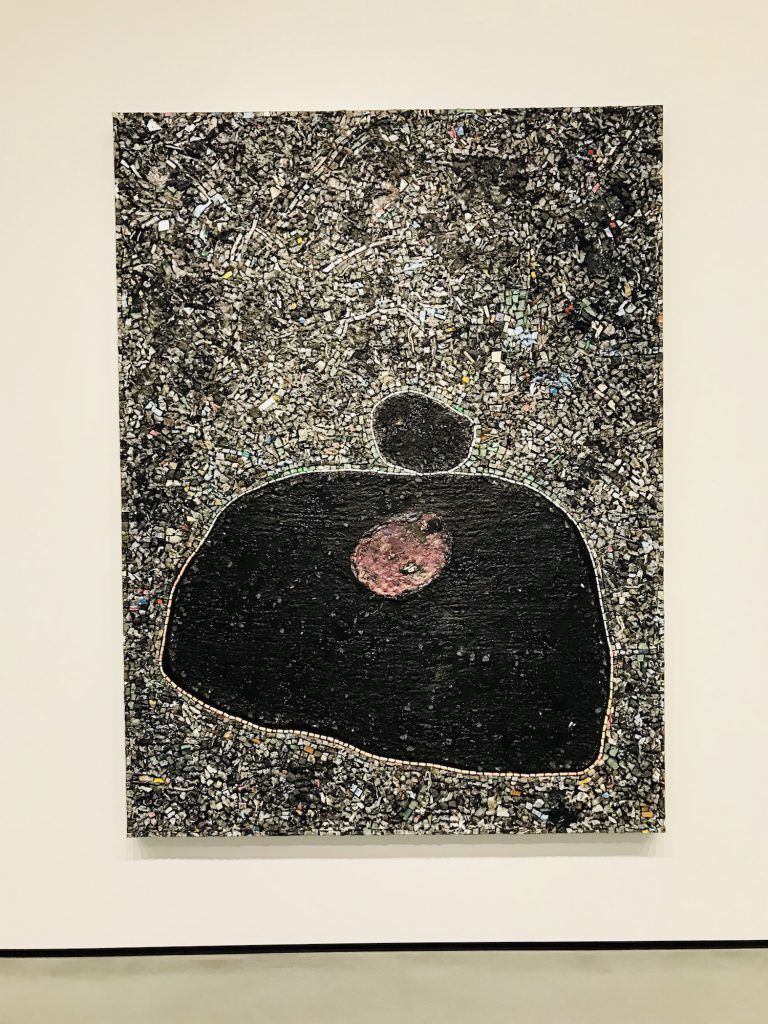 I kept returning to “Black Monolith X (The Birth of Muhammad Ali)” (2016), a beautiful work made to honor one of the greatest boxers the world has ever seen. A large black blob floats semi-center in a dense sea of colorful tesserae. A smaller black blob floats above it. Together the circular forms mimic a deconstructed humanoid silhouette. Another blob tinged purplish pink, like swollen flesh, is placed where one imagines the heart of the form would be. Whitten depicted Ali as all heart, a vulnerable and transient presence. I thought about the impact of such a depiction, the ease with which our country imprisoned an Olympic champion because of his political and religious beliefs, and Ali’s determined decision to stand firm in the fullness of his identity despite threats to his career.

In this abstract painting, Whitten realizes the bravery and fragility of Black accomplishment, a lifetime of celebration snatched at the whim of offended corporate interests. Even as Ali was shunned by the world, he set an unshakable precedent to be proud of who you are, to stand up for what you believe in, despite the consequences. Whitten’s memorial is a powerful and humbling one; it is a stark reminder of the penalties inflicted on Black insurrectionists. Ali is a shadow, a phantom left with only his heart and aura intact. The parallels between Ali’s sacrifices and those of contemporary athletes, as well as artists, is significant.

In Odyssey, Jack Whitten’s paintings and sculptures are grounded in an unflinching love and esteem for Black life, accomplishment, creative genius, and joy. Each of the works exhibited in the exhibit riff on non-figurative portraiture, and enunciate the lived experiences, dreams and mythologies of marginalized communities and forgotten cultures. Odyssey is an epic love story to the unsung brilliance of Jack Whitten. 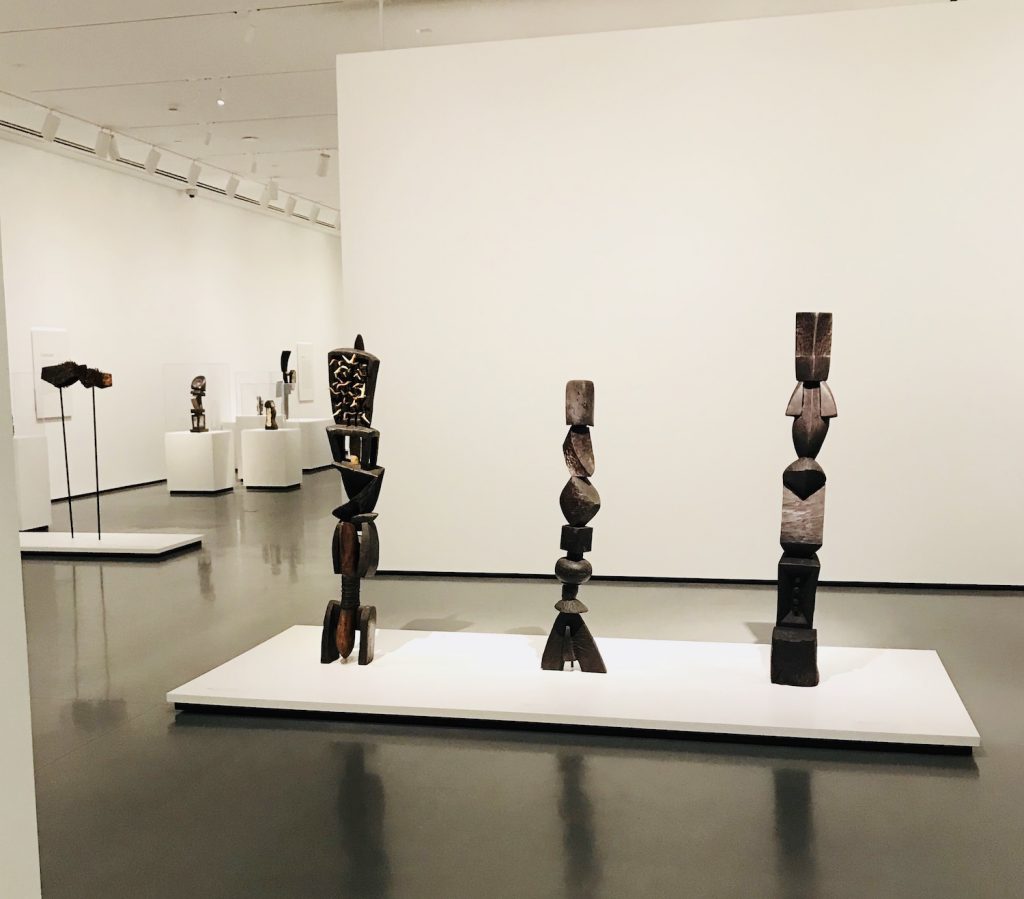 Odyssey: Jack Whitten Sculpture, 1963–2017 will be on view until July 29th, and includes a jazz series that will feature performances from Ravi Coltrane, Sun Ra Arkestra and Lafyette Gilchrist Quartet. Check out artbma.org for more information.