Designed to Dazzle: Kuba Textiles at the BMA 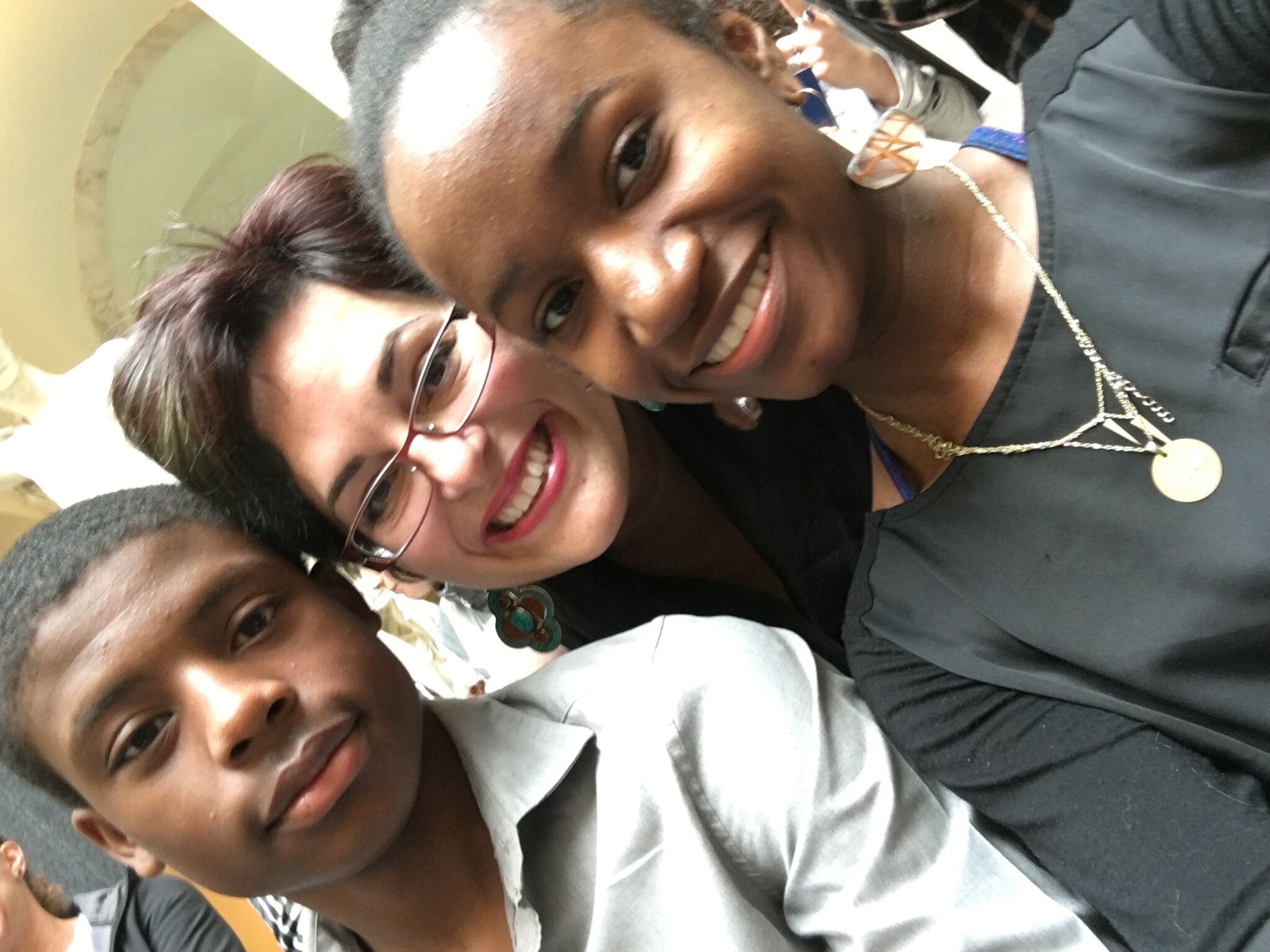 From the Venice Biennale to MD Teacher of the Yea [...] 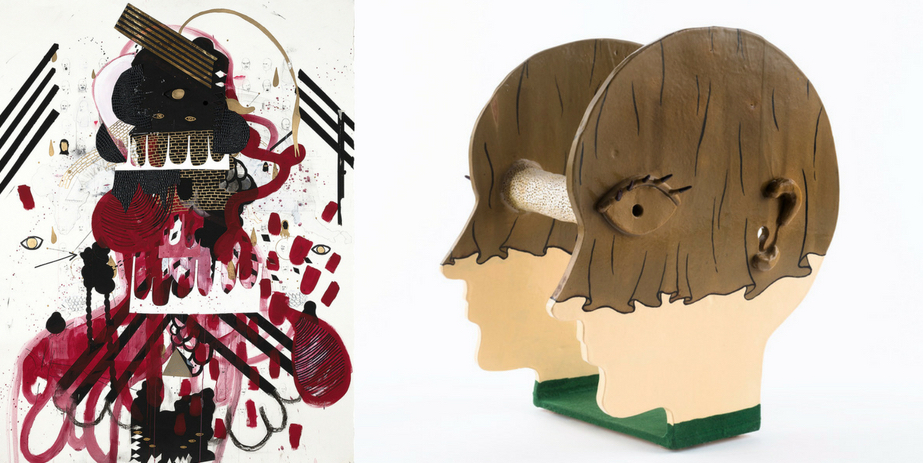 Visual Art
Designed to Dazzle: Kuba Textiles at the BMA 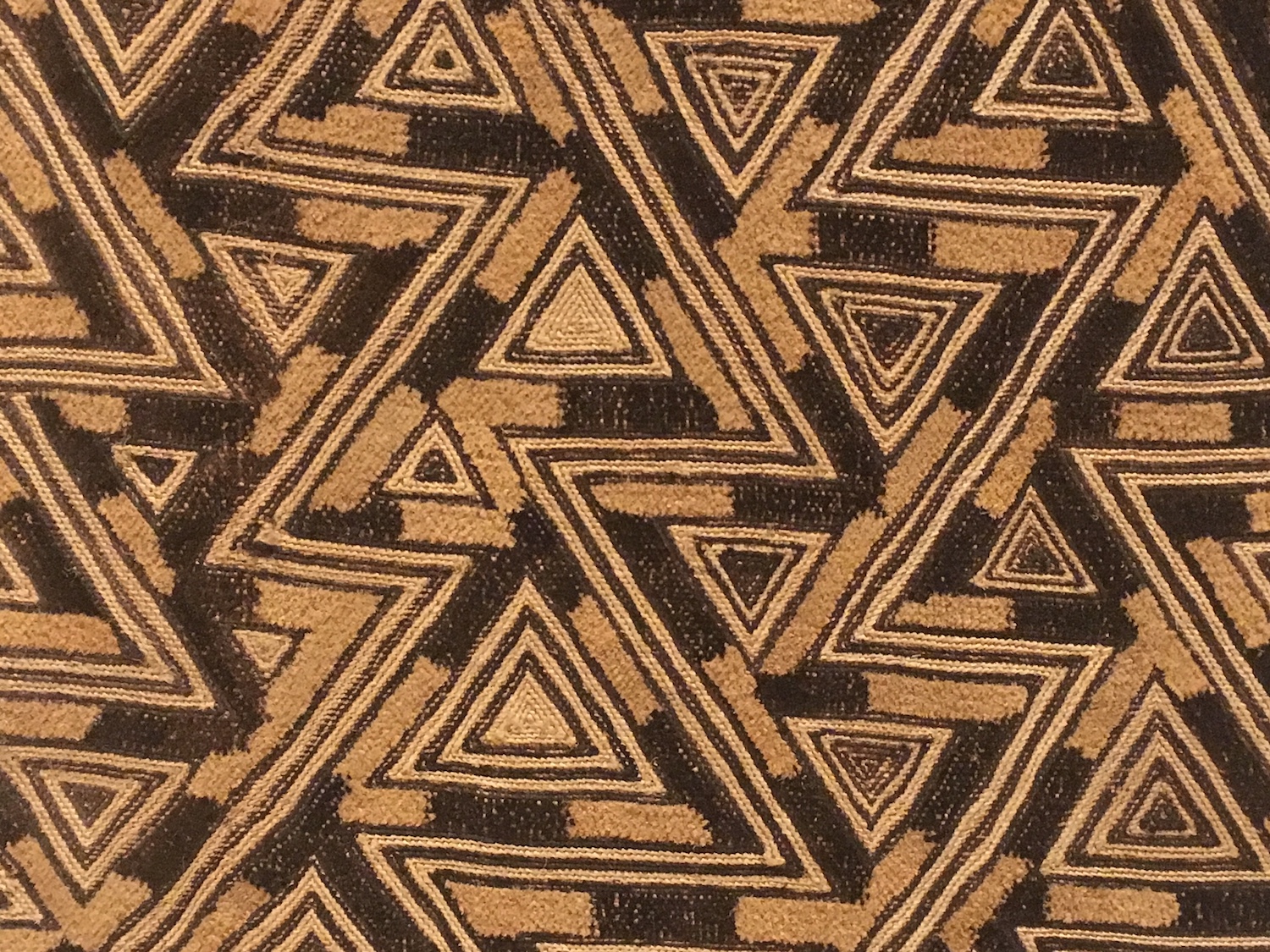 Kuba: Fabric of an Empire at the Baltimore Museum of Art by Kerr Houston

There’s little question that the Kuba textiles currently on view in one of the BMA’s Cone Collection galleries (Kuba: Fabric of an Empire, through January 20, 2019) are beautiful and beguiling objects. Made largely of raffia fibers and featuring a range of embroidery and appliqué work, these pieces arrest the eye: their bold patterns and jazzy rhythms yield a lively, confident abstraction. They’re visually various but consistently inventive; each piece holds its own. Or almost does – for in this installation (curated by Kevin Tervala), the twenty pieces have to compete with wall texts that propose a dizzying range of interpretive possibilities but never quite manage to advance a conclusive central idea. It’s a lot, to say the least, for a single room. Still, this is a rewarding show that may well leave you wanting more; if anything, these objects are so interesting that they deserve an even more sustained and ambitious treatment.

So let’s begin by being generous. For starters, the BMA can be praised for simply mounting this show – for while the textiles of the Kuba (a term used to refer to the various peoples who lived under the rule of a pre-colonial Central African kingdom) have long appealed to collectors, they have not often been the subject of museum shows. As recently as 2003, Irwin Hersey wistfully imagined “the best of these marvelous artifacts hanging on gallery and museum walls in the not too distant future.” That future has now apparently arrived, and the works on display at the BMA – most of which date to the 19th and 20th centuries, and are on loan from a private collection – justify Hersey’s enthusiasm. 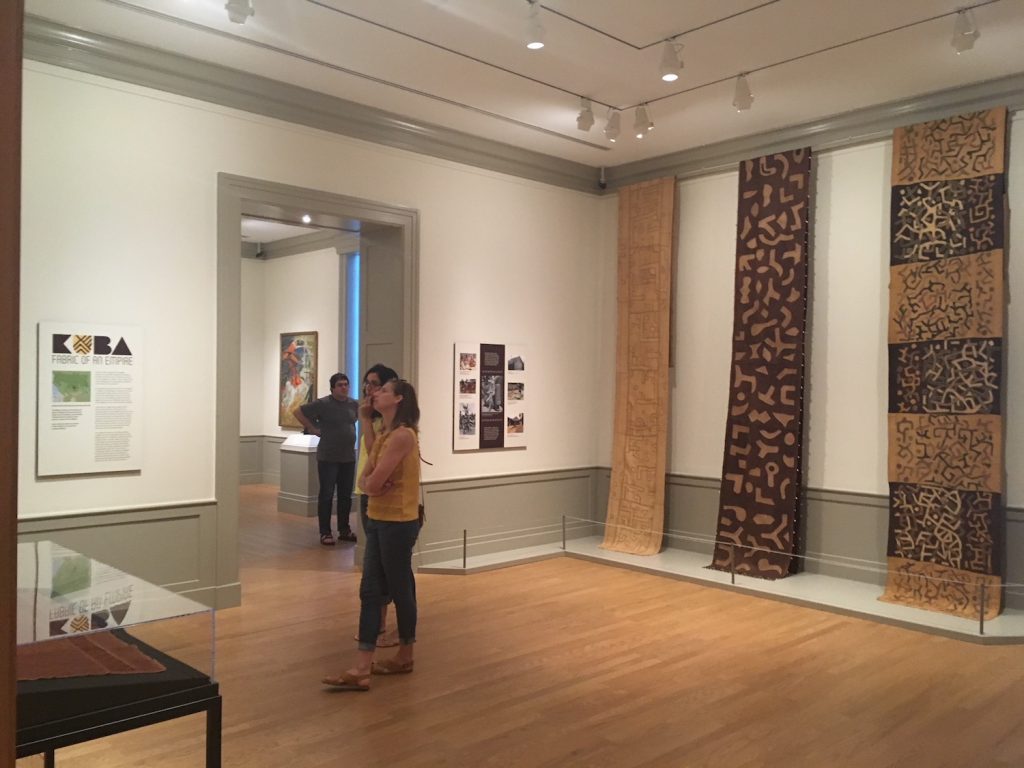 Installation view of Kuba: Fabric of an Empire

The first piece in the show, a lengthy band of embroidered patchwork that was apparently intended to be worn as a formal skirt, is one of the more memorable. Decorated with a series of softly perpendicular forms and circular motifs, it recalls the stout balance of Kufic epigraphy even as it also evinces an almost gaseous buoyancy. The scale of the piece is substantial, but it also honors the human scale of its wearer. And the embroidery is exquisite: figure and ground threaten to merge at points, and the vocabulary of forms is both organic and geometric. Datable, apparently, to the 19th century, this is a remarkable historical object.

Also remarkable is the potent inventiveness evident in an early twentieth century overskirt. While the names of the makers of the works in the show are lost, Kuba textiles were typically the result of a collaborative process, as men cut and stripped the fibers and women executed the more detailed work, devising and applying a stunning range of linear and geometric forms in an array of woodsy browns, peachy oranges and stout blacks. Remarkably, they did not usually rely on patterns in this process, relying instead on memory and improvisatory talent. You get the sense, in looking at a piece like the overskirt, of an almost bottomless well of related possibilities; both the diversity and the precision of the forms astound. 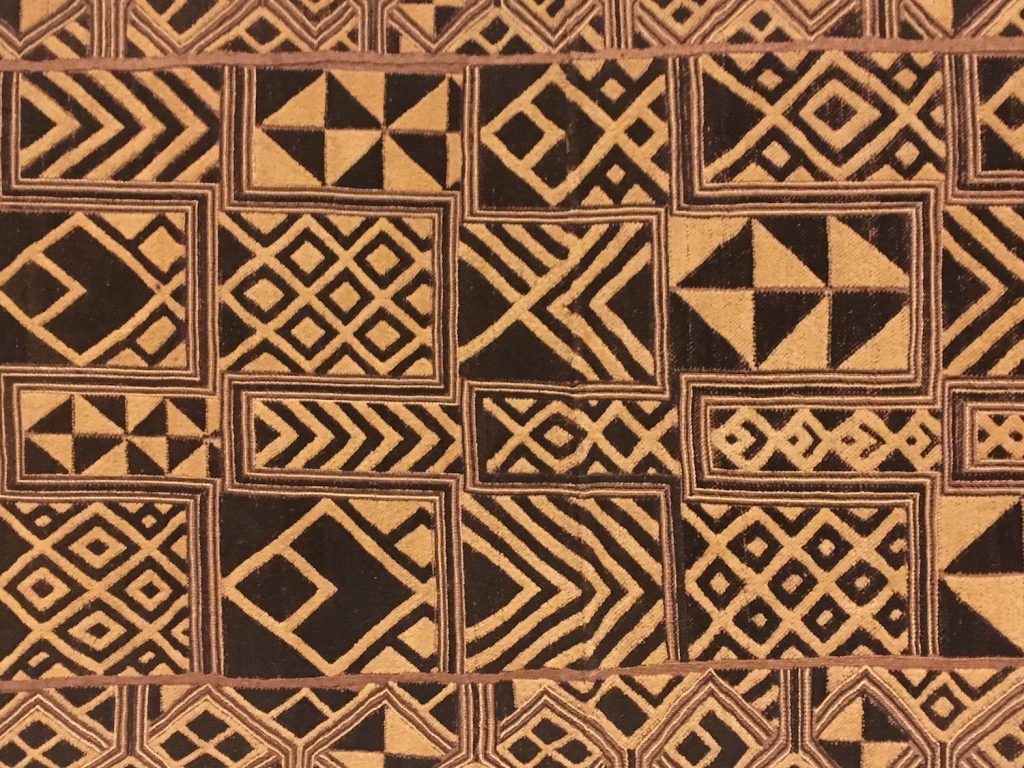 And in fact they were probably calculated to astound. Manufactured primarily for members of the king’s ruling class, and sometimes as tributes to the king himself, Kuba textiles frequently acted as advertisements of social status and wealth. Specific dyes could denote social station (red for the royal family; white for the nobility), and the relative intricacy of the designs often corresponded, as Elizabeth Bennett and Niangi Batulukisi point out in a book on Kuba textiles, to the status of the owner. Far from mere experiments in form, then, these textiles played a constitutive role in the display and maintenance of social standing: they were meant to impress.

That’s a point openly articulated in this show, as well; indeed, one of the wall texts explores the intriguing idea that the sheer waste of cloth implied in the unique applied shapes in some of the examples may have connoted the wealth of the wearer. Rather like the expansive bands of luxury fabric that tumble into the foregrounds of Renaissance Italian paintings of the Virgin Mary, these Kuba textiles thus seem to have associated the profligate display of cloth with status. But the BMA wall texts then go further still, and propose a broad evolution in which repeating patterns gave way to bold, inventive, ever-changing ones. Citing recent carbon dating analysis (the show was produced in partnership with the Historic Textile Research Foundation), the wall texts thus make a case for a formal change that unfolded over the course of several centuries.

It’s an interesting hypothesis, and nudges viewers to see the work in diachronic, as well as formal and symbolic, terms. But the result is also confusing, as the exhibition suddenly seems more interested in multiplying possible avenues of analysis than in pursuing any one in real depth. And as we move about the room, the methodological angles continue to proliferate. At one point, we are encouraged to think in terms of semiotic analysis: “Like words on a page,” we read, “these textiles tell the history of this empire.” At other points, the show leans on reception theory, as when we are told that some of the textiles were made to be recognized from a distance during state ceremonies, and to impress both citizens and Belgians. Then, too, there is a determinedly postcolonial bent to the wall texts, which refer repeatedly to the period of Belgian control (between 1900 and 1960), and pledge an “attention to colonialism and globalized trade.” 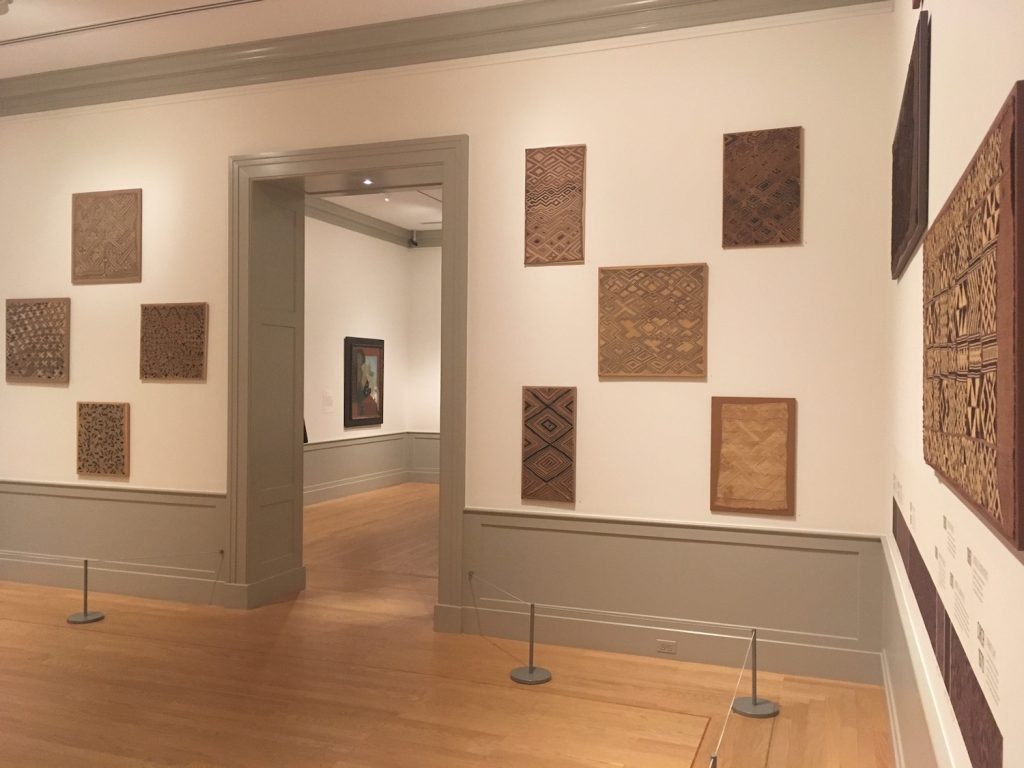 Installation view of Kuba: Fabric of an Empire

These are all, to be sure, potentially rewarding angles of analysis. But invoked, as here, in brief passages and in the confines of a single room, they feel unresolved and underdeveloped – or even unconvincing. The comparison to words on a page is especially awkward, as these textiles were evidently understood and experienced in a range of extra-linguistic modes and contexts. But other claims also raise questions. Would audiences as disparate as Belgian authorities and Central African rebels really have responded to such work (which, scholars have argued, featured visual forms that carried particular associations for their makers and wearers) in similar ways? A more nuanced and sustained analysis of the textiles’ specific audiences would help.

And so, too, would a more compelling discussion of the effects of colonialism. This show seems to want to adopt an empowering reading of Kuba textiles as objects that manifest a conscious and active response to the encroaching Western world. “This is not,” one wall text insists, “a story of victimization.” At the same time, however, a second wall text contends that the Belgian sack of the capital city plunged the Kuba kingdom into a period of instability and caused a marked decline in textile production. I suppose we could quibble over whether or not such systemic violence resulted in victimization, but the larger point seems undeniable: Kuba textiles were obviously affected by the arrival of the European powers.

Indeed, the story of that relationship is a fascinating and complex one, as it points to the dynamic reciprocity that could characterize interactions between colonizing powers and creative subjects. It has been argued, for example, that one of the purple dyes used in late Kuba textiles was derived from the mimeograph ink brought to Central Africa by missionaries. Or consider an even more frequently repeated story: in the 1920s, the Kuba king saw his first motorcycle, a European import. He allegedly showed relatively little interest in the machine itself, but was deeply intrigued by the tracks left by its tires, and used the pattern as a basis for a series of textiles. 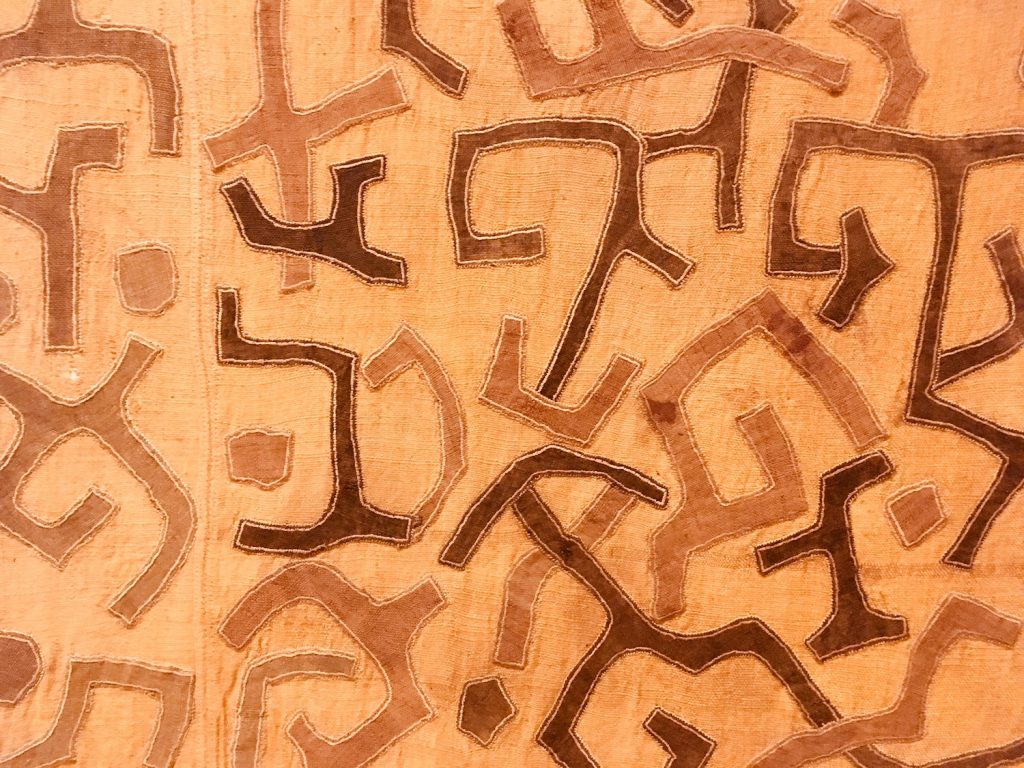 Cross-cultural interactions, then, can result in novel developments and creative repurposings. And, happily, this show seems to acknowledge that fact in several ways. It’s installed in a gallery that opens directly onto a room featuring work by Matisse – who was an early admirer of Kuba textiles, and kept several of them in his studio. You can thus study that relationship for yourself by taking a few brief steps. More broadly still, the Kuba textiles are placed between the largely modernist Cone Collection and the Contemporary Wing: in a gallery that constitutes a transitional moment in the history of art that is implied by the museum’s layout. In that sense, the decision to fill the room with African work is notable, as it suggests an alternative, global history of art; the familiar passage from Paris to New York is momentarily disrupted.

Ultimately, then, there’s much to like about this show, despite the slightly confusing aspect of the wall texts. And even those texts, perhaps, are best read as a sign of real curatorial enthusiasm for an obviously appealing set of objects. Colorful, confident, and historically complex, the Kuba textiles reward the eye, even as they productively complicate the museum’s more general geography. They easily command the single room they are given – and one comes away with the pleasant sense that they could support an even more sustained investigation.

All photography by Kerr Houston

Kuba: Fabric of an Empire is on exhibit at the Baltimore Museum of Art through January 20, 2019.