The Past, Presented: Dawoud Bey at the National Gallery of Art 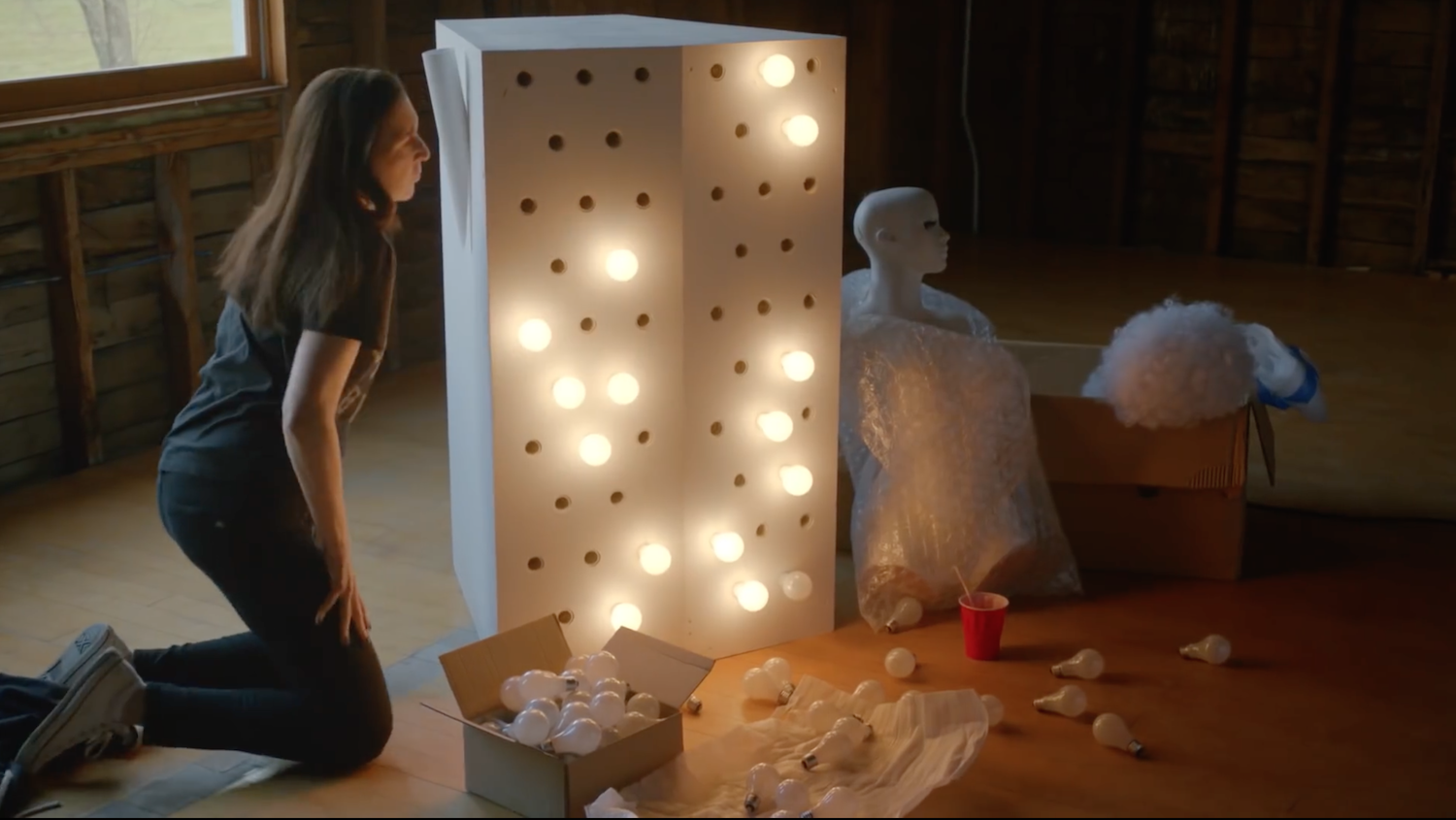 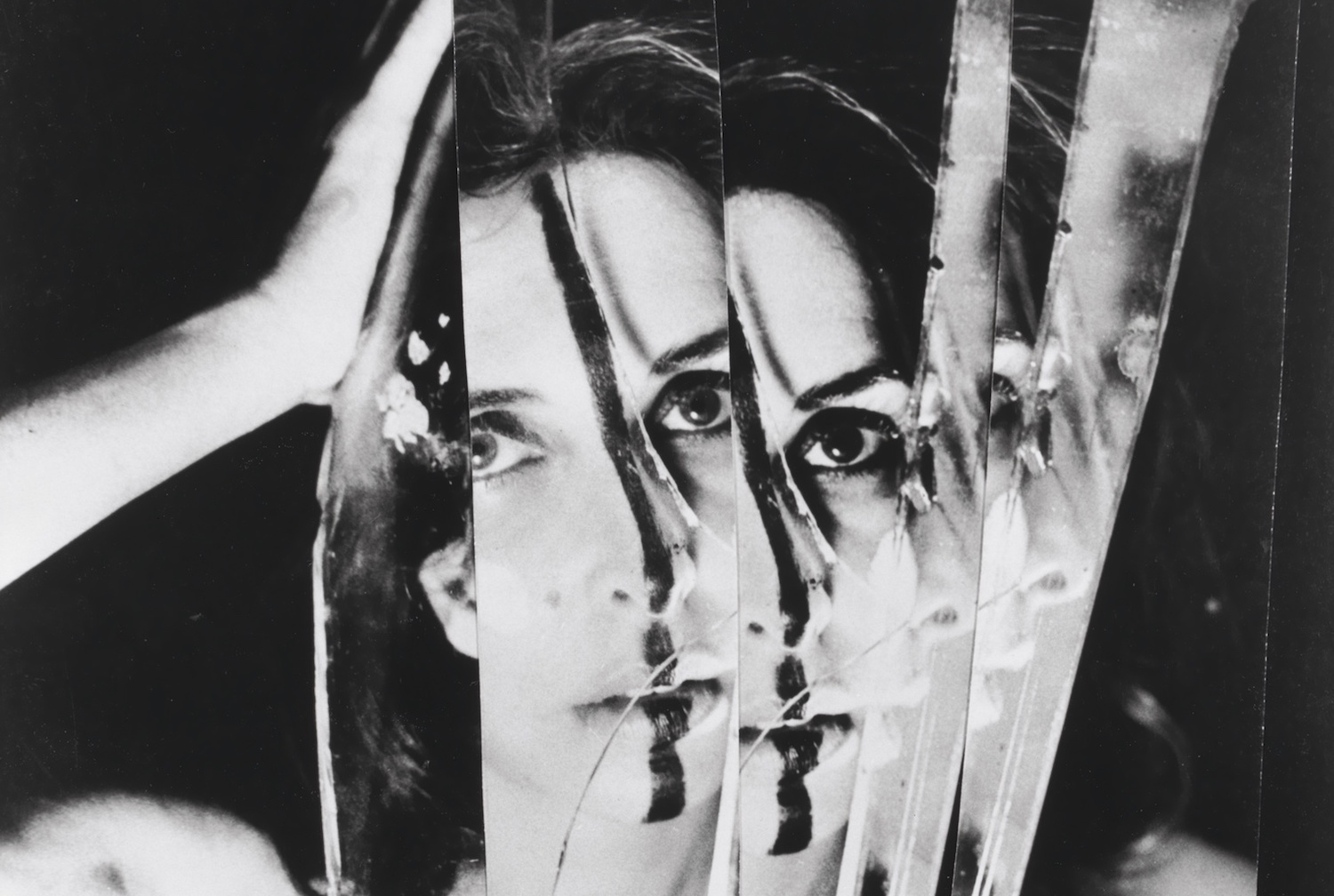 Visual Art
The Past, Presented: Dawoud Bey at the National Gallery of Art 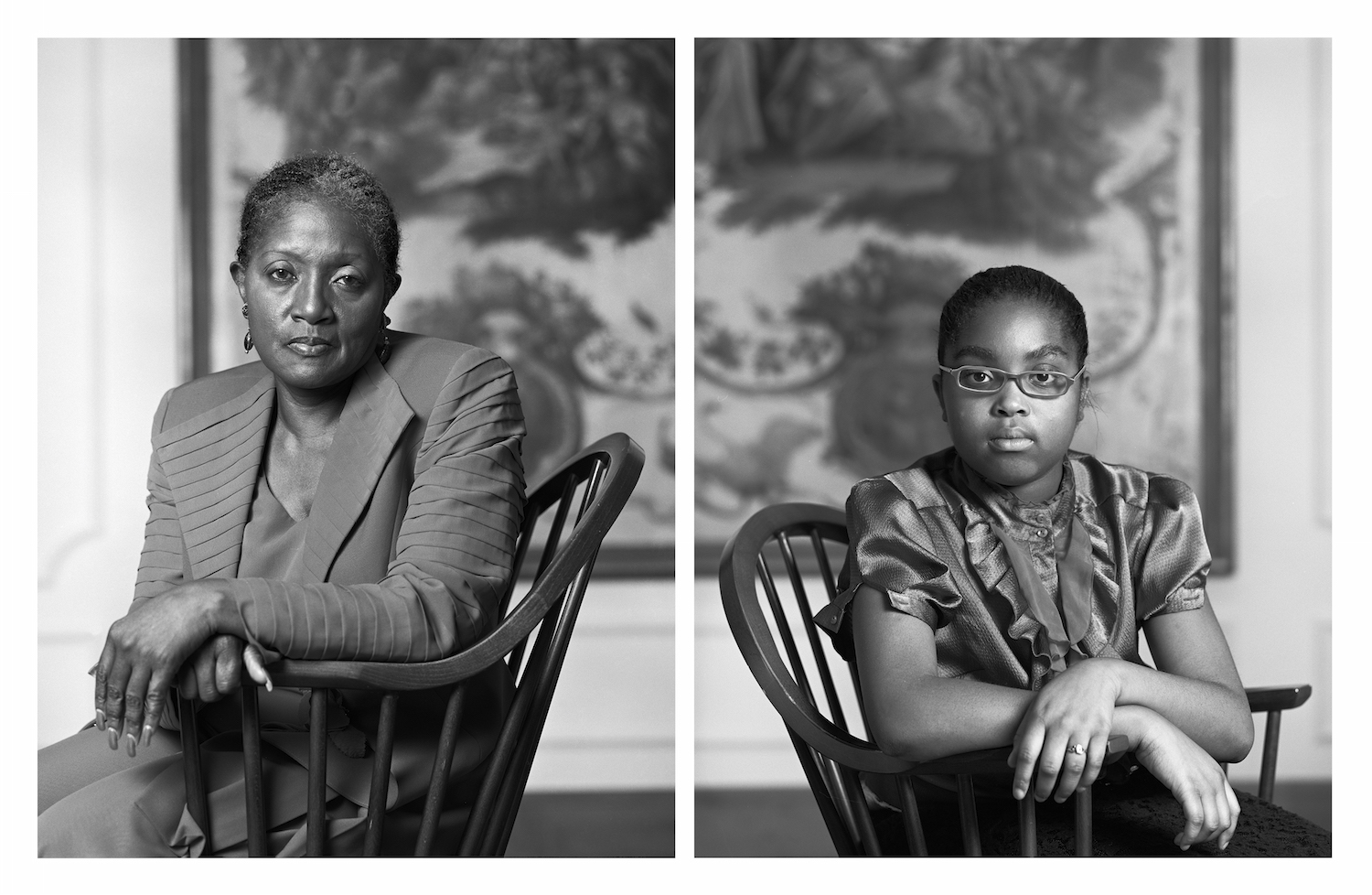 The episode was so grim, so barbaric, that it seems almost unimaginable. On a September Sunday in 1963, four members of the Ku Klux Klan placed more than a dozen sticks of dynamite and a timer beneath the steps of Birmingham’s 16th Street Baptist Church, a prominent African-American place of worship. At about 10:23 a.m., an explosion tore through the structure, leaving a crater in a basement lounge, throwing a passing motorist from his car, injuring more than twenty parishioners – and killing four girls who had been changing into their choir robes.

What can one possibly do in the wake of such an atrocity? More than 2,000 people quickly assembled, stunned, and sifted through the rubble as the pastor recited psalms through a bullhorn. Others took to the street to protest, and violence soon redounded: before the day was done, one black boy was fatally shot in the back by Birmingham police, and a second was killed by a white teenager coming from an anti-immigration rally. Martin Luther King Jr. tried to offer a sense of context, labeling the attack “one of the most vicious and tragic crimes ever perpetuated against humanity,” while Nina Simone mournfully sang that “Alabama’s gotten me so upset.” And in New York City, a young boy named David Edward Smikley studied a wrenching photograph of Sarah Collins, a 12-year-old girl who had been badly injured in the explosion – and sensed that his life was altered. 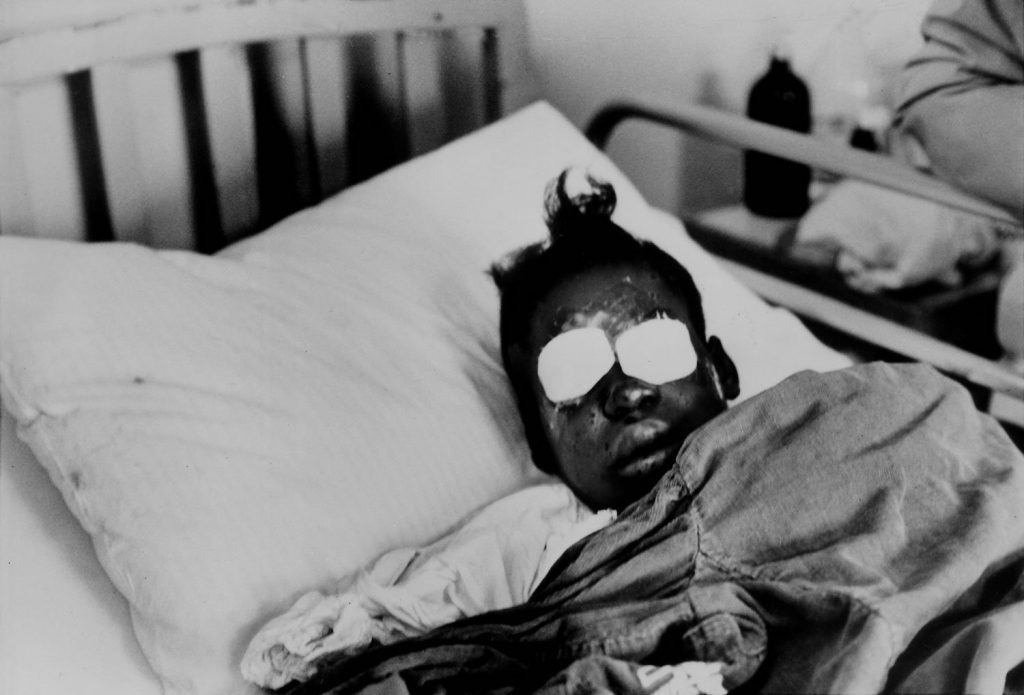 Nearly fifty years later, Smikley – who had since earned an MFA from Yale, changed his name to Dawoud Bey (King David, in Arabic), and earned a reputation for his photographs of adolescents and African-Americans – sat bolt upright, with the photograph of Collins in his mind. “Something disgorged,” he said on Tuesday, remembering the moment, “and I knew I needed to go to Birmingham.” He soon did, and once there sought a means of coming to terms, in some fashion, with the legacy of the bombing. Eventually, he began to reach out – through Craigslist, school visits, and local pastors – to Birmingham’s black residents, seeking subjects who were either the exact age of the children killed in the attack (that is, 11, 13, 14, or 16 years old), or the age that they would now have been, had they lived. He then photographed each sitter in one of two settings with a historical connection to the city’s history of segregation (The Birmingham Museum of Art, and Bethel Baptist Church), and grouped 32 of the black-and-white pictures in sixteen diptychs that pair an adolescent and an adult: a potent conflation of testimony to lives cut short and speculation about what might have been.

First shown in 2013, The Birmingham Project has since been mounted in a number of variously scaled permutations and venues across the country. (Indeed, the sustained visibility of the work helped Bey earn a Macarthur Fellowship in 2017.) Recently, the National Gallery acquired four of the diptychs, along with a related 11-minute video, and is now exhibiting them in a modest but moving two-room show (in the Gallery’s West Wing through March 24, 2019). Roughly life-sized in scale, the eight figures seem to gaze at us in a remarkable condensation of appraisal, reflection, and a simple bearing of witness to a tortured local history.

“I wanted,” Bey has said, “to give tangible and palpable physical presence to the young people martyred that day.” The works certainly do that. But, exhibited in D.C. at this moment, and only a few years after a deadly attack on an African-American church in South Carolina, they inevitably do something else, as well. As Kara Fiedorek, who curated the show, noted, they also pose “the question of how much has or has not changed.” 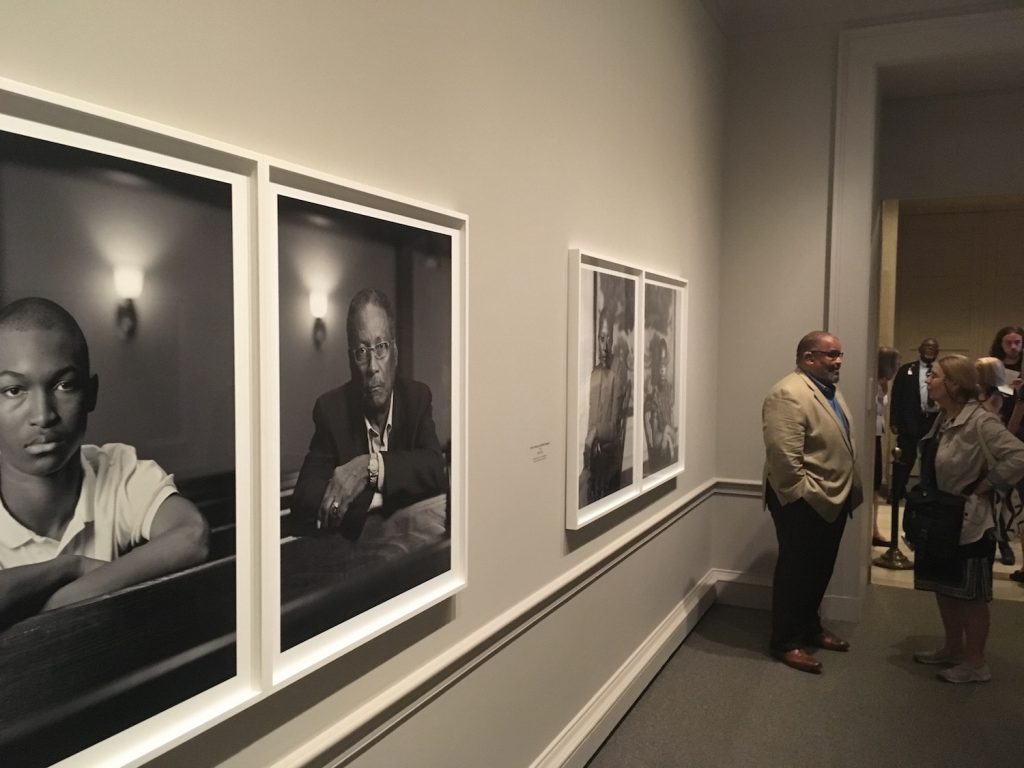 The basic premise behind Bey’s project is timeless and rich with associations. What might have happened, we naturally ask when a life is cut short, had that person lived, and what might they have become? It’s the question that has haunted the sons of Princess Diana since her death (as Prince Harry put it in a recent interview, “There’s not a day that William and I don’t wish that she was… still around, and we wonder what kind of a mother she would be now, and what kind of a public role she would have, and what a difference she would be making.”) But it’s a question that’s also implicit in the age-processed photographs of missing children, which aim, using a blend of science and art, to develop a possible future for a tragic past. And it’s the question, too, at the heart of a recent project by Mariela Sancari, who photographed a number of men the precise age that her father would be, had he not died when she was a teen. This is the realm of the hypothetical, a territory where imagination can act as a temporary tool against grief or uncertainty.

And yet Bey’s work, while it thus addresses a more general concern, is undeniably distinct. Indeed, much of its power lies in its specificity and its facticity. Bey, as he usually does, granted his sitters a pronounced degree of agency, allowing them to choose between the two venues and to select their own clothing. Over the course of several visits, he then took hundreds of photos, and eventually created pairings based on gestural, physical, and dispositional relationships. The sitters, then, did not know each other and were not photographed in tandem – but their images, grouped together, inevitably suggest the passage of time. The taut skin and touching self-consciousness of the adolescents gives way to the evident wrinkles, grayed hair, and complicated maturity of the adults. And three of the adults wear glasses: a concession, sure, to the realities of aging, but also a testament to how much they have witnessed (each of them remembers, says Bey, the bombing; several of them knew at least one of the victims). 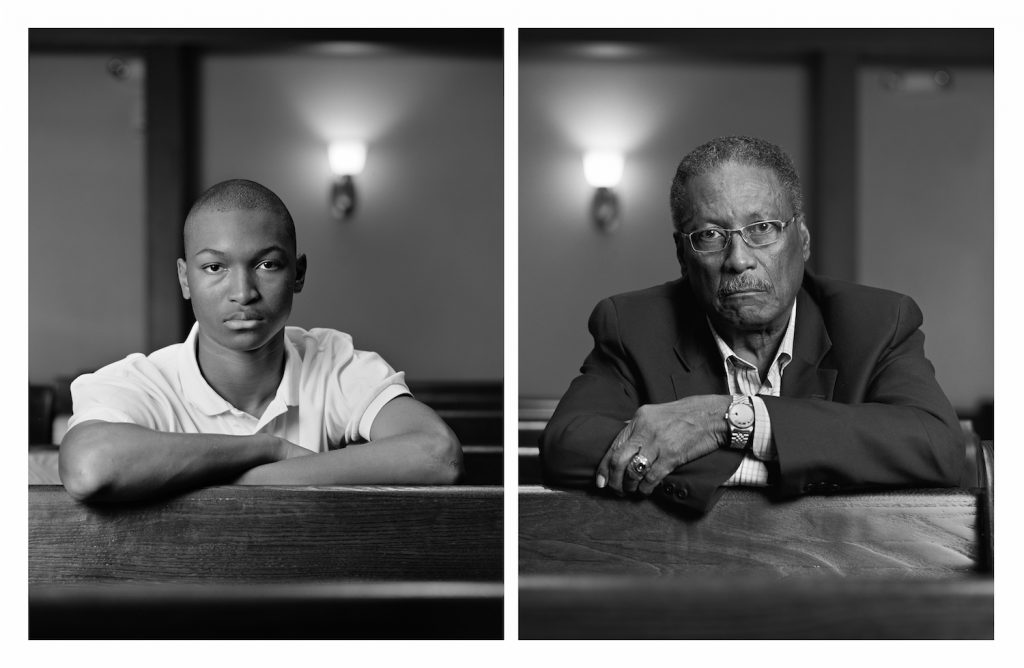 Consider the diptych that pairs Michael-Anthony Allen and George Washington. The two photographs are in black and white, suggesting a historical past. And yet these figures are, again, undeniably present: present before Bey’s lens, in 2012, but psychologically present, as well. Leaning forward slightly, on the hard wood of a church pew, they both occupy space, but in distinct ways; Allen’s jutting elbow feels slightly aggressive or proprietary, while Washington’s folded arms yield an air of patient expectation or sociability. And then we notice his watch, and what seems to be a class ring: unsettling material symbols of what could have been attained over the course of a lifetime, had the six youngsters not been murdered prematurely.

That sense of loss is only amplified in Bey’s use of the diptych format, which of course has a long association, in Christian art, with martyrdom and sacrifice. We are used to hinged diptychs that pair an image of the infant Christ, in his mother’s lap, with an image of an adult Christ on the cross. Bey’s diptychs, similarly, suggest the trajectory of a life even as they insist upon a historical moment of violence. And, in the process, they also challenge the notion of the photograph as a stable, fixed form. “For a long time,” Bey told me, “I’ve been interested in disrupting the idea of the photograph as a single object, a single thing.” His diptychs do exactly that, acknowledging the passage of time and a multiplicity of perspectives, and creating in the process a troubling gap between an historical event and its memory, or commemoration. 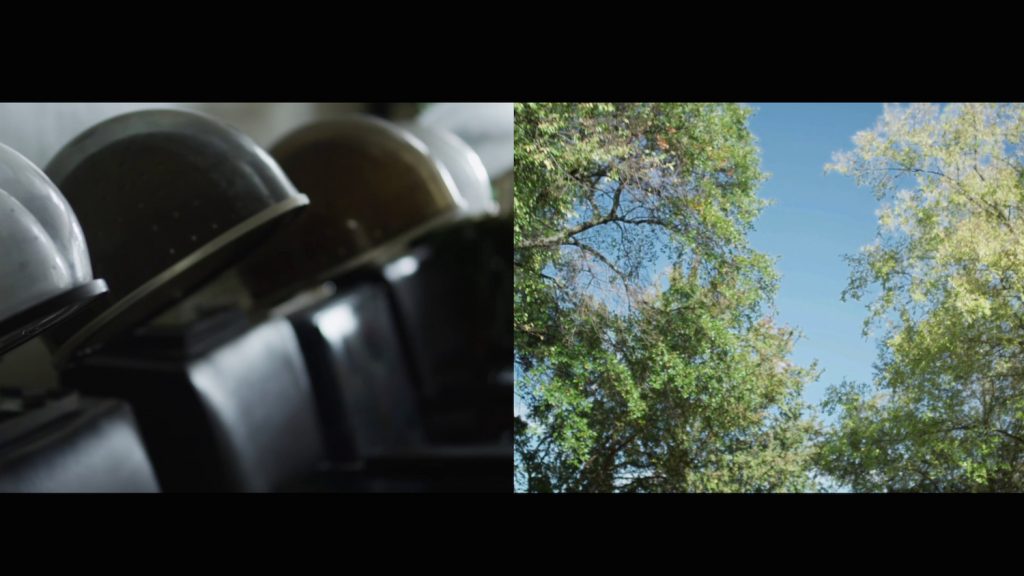 The video, in turn, embodies largely similar interests, but manages to succeed on its own terms. It, too, involves a pairing of images: footage taken from a low vantage point in the back seat of a car as it drives through Birmingham towards the 16th Street Baptist Church, and gliding shots of local communal and social spaces – hairdresser; lunch counter – that bear various connotations. The accompanying soundtrack, a rather generic piece of ethereal electronica by Ramon Alvarez-Smikley, feels unnecessary. Ignore it, though, and you may well be moved by the video footage, as the camera lingers on the surfaces of barstools that were once the scene of heated, physical struggle and records the complicated fall of dappled sunlight through trees. It calls to mind, at once, a child’s idle reveries and curiosities about the layered world of adults. And then, jarringly, the church’s street sign swims into focus, and we realize that we have arrived, again, at the site of a hate crime.

But did we ever, really, leave it? A day after the Birmingham bombing, a local lawyer named Charles Morgan Jr. gave a remarkable speech, in which he answered a rhetorical question with a stinging analysis. “Who did it? It’s really rather simple. The ‘who’ is every little individual who talks about the ‘niggers’ and spreads the seeds of his hate to his neighbor and his son. The ‘who’ is every governor who ever shouted for lawlessness and became a law violator.” In an era when the nation’s president has publicly referred to African-Americans as dogs and low-IQ, and has applauded neo-Nazis as good people, Morgan’s observation remains compelling – and suggests that not much has changed, really, since 1963. We belong, Bey’s project suggests, to a community that spans both space and time, and just as the problems that beset us fifty years ago are still very much with us, so too are the conditions of their perpetuation.

Not that that’s necessarily a new revelation. Indeed, at the press preview Bey invoked the wise words of James Baldwin, who once claimed that “The great force of history comes from the fact that we carry it within us, are unconsciously controlled by it in many ways, and history is literally present in all that we do.” Bey’s work acts as an earnest exploration of that sentiment, articulating the ways in which the past continues to shape the present. Or, in the case of six Alabaman children, might have – but cannot.