Coming of Age, Coming Out, and Dealing with Death in ‘Fun Home’ at Center Stage 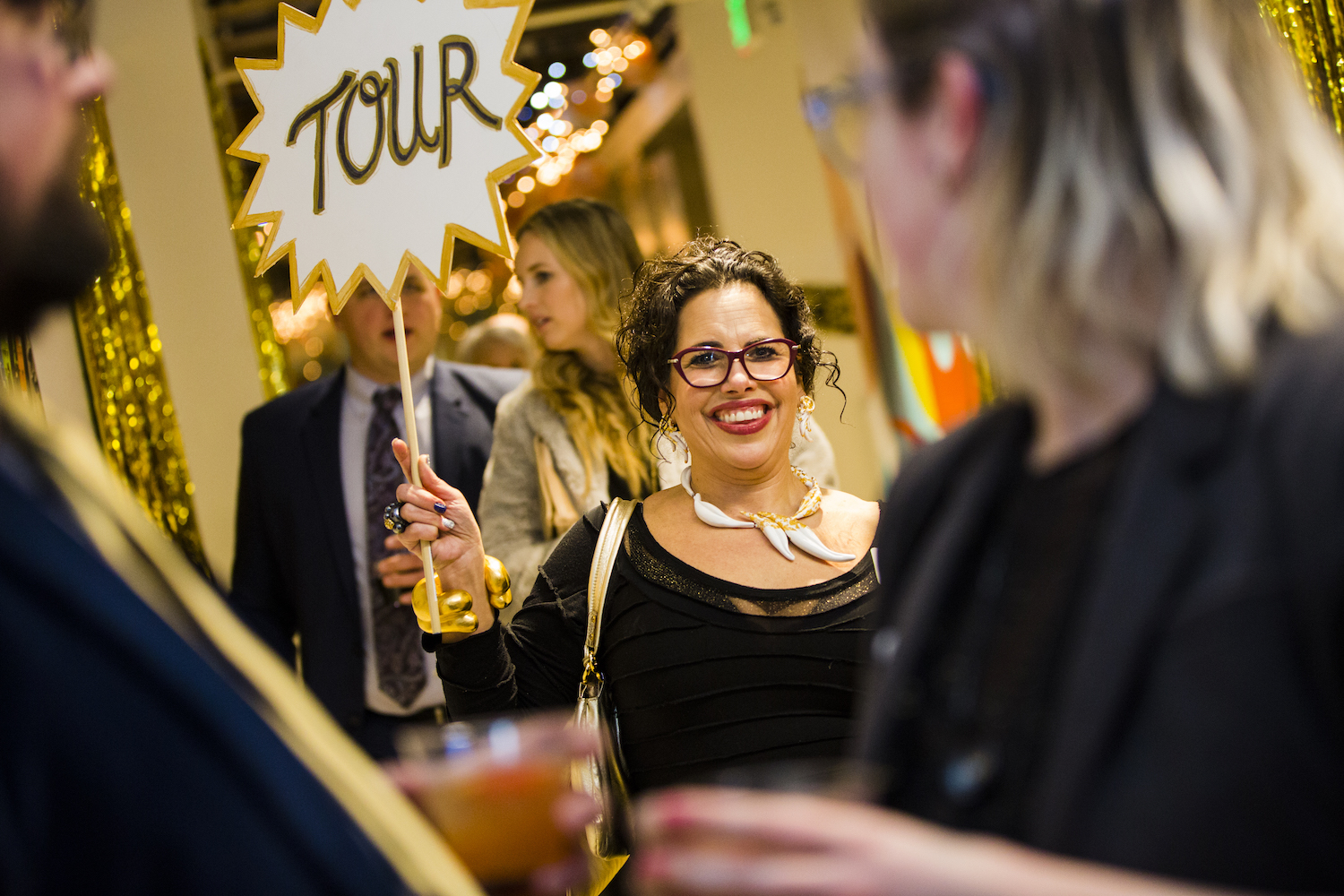 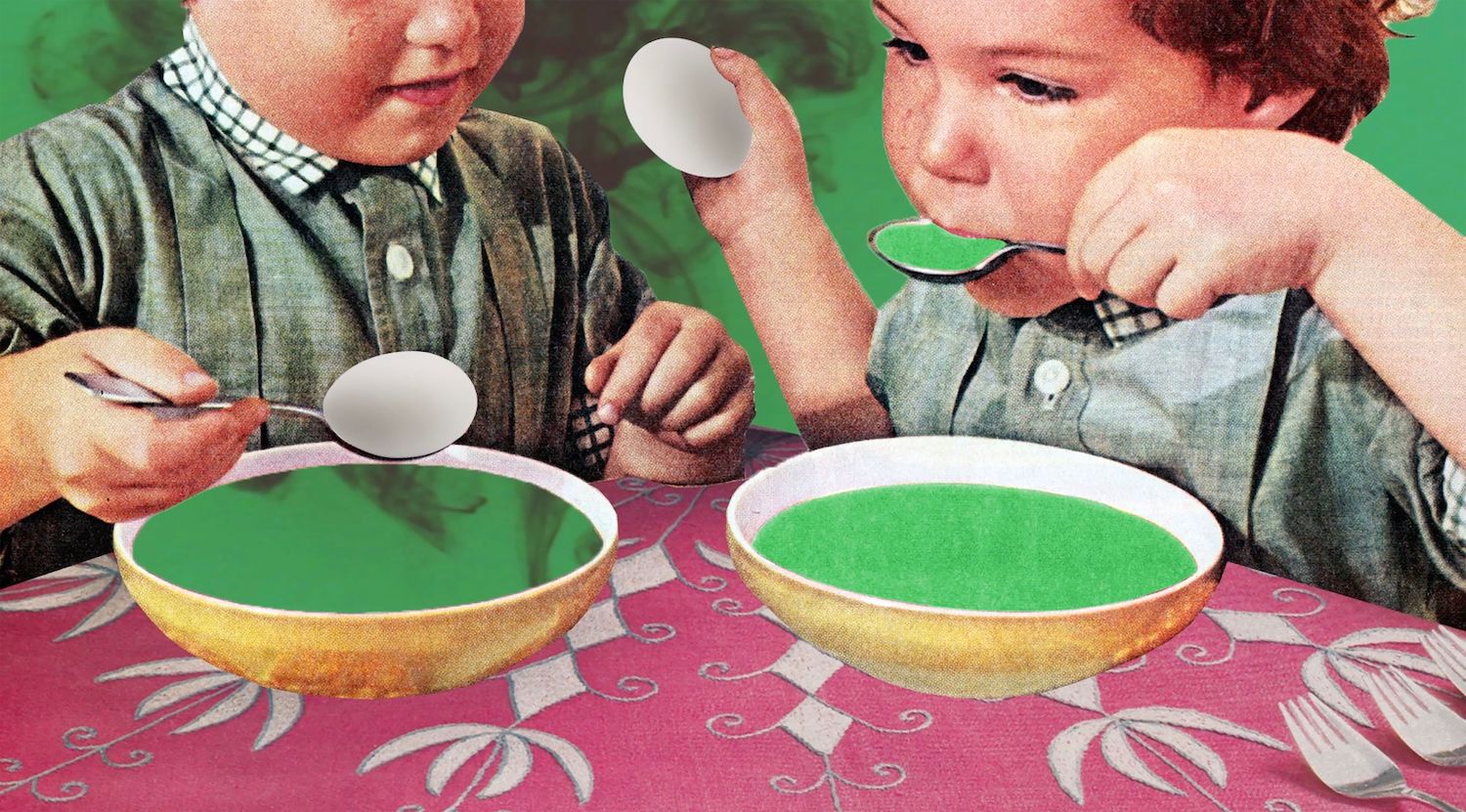 Performance: Music, Theater, & Dance
Coming of Age, Coming Out, and Dealing with Death in ‘Fun Home’ at Center Stage 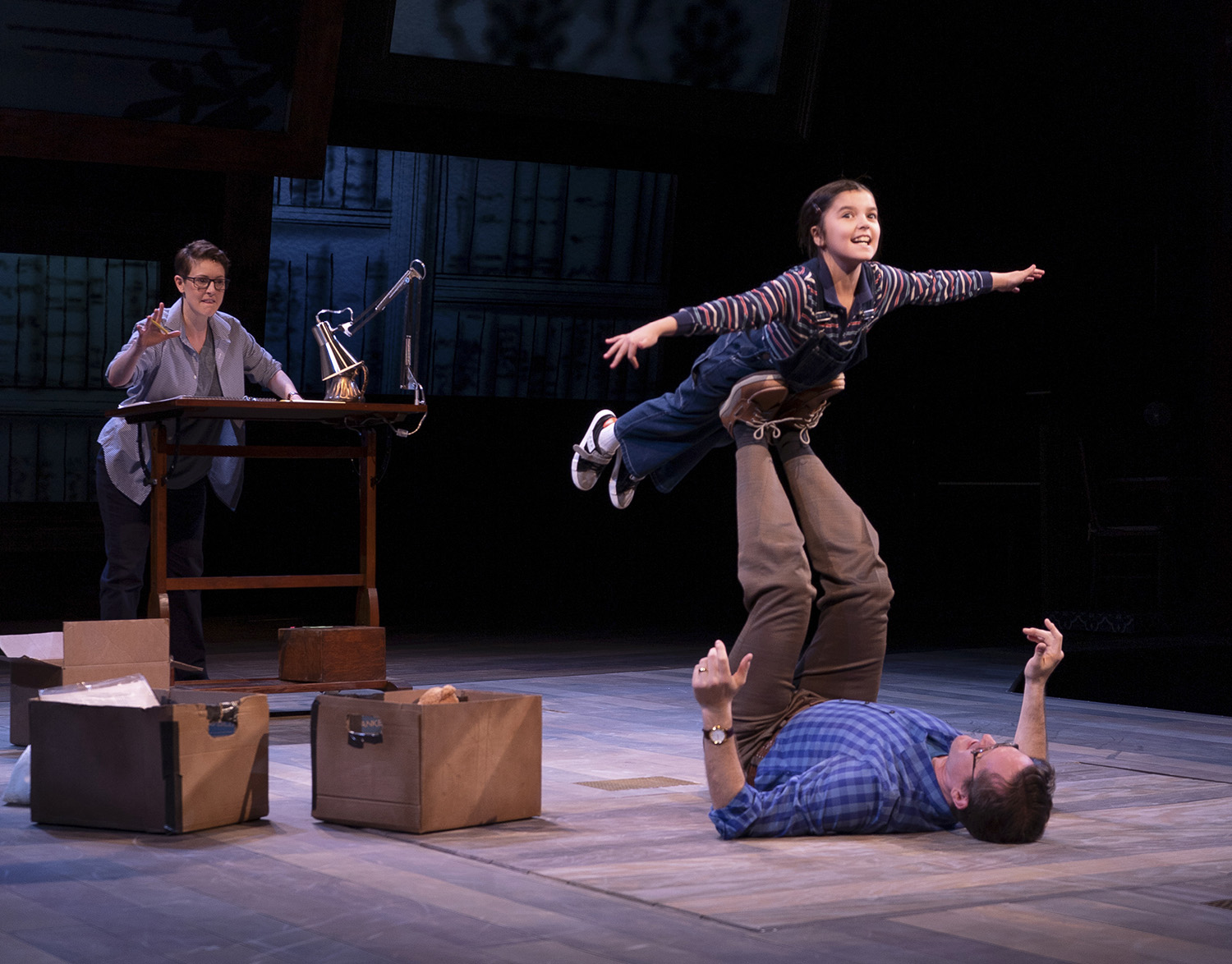 One of the many problems with having two parents is that sometimes you lose the one you need. Barely one song into Fun Home, the musical adaption of Alison Bechdel‘s graphic-novel memoir of the same name currently in production at Baltimore Center Stage, the main character tentatively orbits this dilemma when she spoils the musical’s entire plot with a casual direct address to the audience: “My dad and I both grew up in the same small Pennsylvania town. And he was gay. And I was gay. And he killed himself. And I … became a lesbian cartoonist.”

As in life, though, knowing what’s going to happen doesn’t adequately prepare you for how it all goes down. Fun Home—the Bechdel family diminutive for the English teacher dad’s side business, running a funeral home—is a tangle of emotions, memories, and missed opportunities, an effort to unpack in the topsy-turvy turns of art time what real time makes all too difficult to comprehend. The word tearjerker typically applies to those overcooked melodramas and cliché-ridden pop movies that manipulate the emotions into a good, old-fashioned ugly cry; Fun Home puts the messy, dysfunctional, cathartic emotional jolt back into the word, a reminder that life all by itself is sometimes simply way too fucking much.

Composer Jeanine Tesori and writer/librettist Lisa Kron penned a loose, genre-hopping musical in Fun Home, which untangles its story over a breezy, lively, and entertaining 90 minutes or so. Seamlessly leapfrogging from tragedy to comedy and back again onstage, though, requires a painstaking coordination of cast and crew, and a huge kudos to director Hana S. Sharif and the entire creative team here for being so sympathetic to the book’s ebbs and flows. Scenic designer Scott Bradley and lighting designer Xavier Pierce take a spartan approach to decorating the upstairs Head Theater; a minimal number of props slide onto or come up from beneath the stage to faintly sketch the studio of grown-up Alison (Andrea Prestinario), the college dorm room of medium Alison (Laura Darrell), or any of the many rooms in the restored old home in rural Pennsylvania where small Alison (Molly Lyons) lives with her brothers John (Jon Martens) and Christian (Liam Hamilton), mother Helen (Michelle Dawson), and her sometimes overbearing father Bruce (Jeffry Denman). 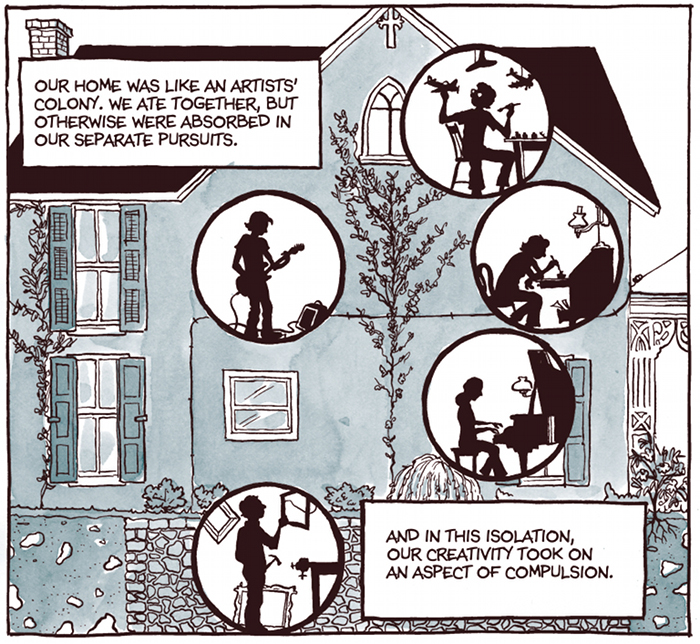 As in Bechdel’s original work, this Fun Home sidewinds nonlinearly through time as the grown-up Alison remembers her life as a kid and in college, when she came out to her parents, and tries to get a handle on what her relationship was really like with her father. At times, Alison begins drawing or narrating a scene from her memory that becomes one onstage.

We’re basically witnessing somebody recursively try to understand who she is by sifting through memory’s puzzle pieces, a process that turns her life story into therapeutic stages of grief. There’s those halcyon early days of being a kid with her family in their house on Maple Avenue, which their father is restoring and where their mom makes sure everything looks just so. The early numbers are deliberately nostalgic, musically and thematically. Alison idealizes her childhood, the music a sonic Instagram filter. “Come to the Fun Home,” which small Alison sings with her brothers, is a Jackson 5 callback, its guitar wiggle and melodic harmonizing practically an “I Want You Back” sample. “Raincoat of Love,” a later number, is an actual Partridge Family riff in context of the musical itself, while other songs, if heard by themselves, would fit into most contemporary pop musicals.

This could feel scattershot, but in Fun Home there’s a dramatic logic to the sequencing that reels you into Alison’s world. We’re hearing her internal jukebox, that soundtrack we all have as the music to our internal lives, which adds layers to the stories we’re watching onstage. That “Raincoat of Love” Partridge Family number takes place just past the story’s midway point, after medium Alison has come out to herself (“Changing My Major”) and grown-up Alison begins to understand how small her dad’s world was during his lifetime (“Maps”). Childhood’s rosy glow in “Come to the Fun Home” has tarnished. “Raincoat,” like “Come to the Fun Home,” takes place in the timeline of small Alison, but after she has put some of her puzzle pieces into place. She’s remembered the tension between her mom and dad. She’s remembered the way her father obsessively fussed over their home’s appearance. She’s remembered that her dad seemed to have a curious relationship with the young man, one of his former students, he hired to do work around the house. And though “Raincoat” bubbles with the grooviness of a made-for-TV family musical and the chorus is “Everything’s all right, babe, when we’re together,” everything about the scene turns that sentiment into a fake smile. Nothing’s all right, and it hasn’t been for a long time.

Fun Home puts the messy, dysfunctional, cathartic emotional jolt back into the word tearjerker, a reminder that life all by itself is sometimes simply way too fucking much.

Denman does a tremendous job of making Bruce initially seem like a TV sitcom dad—he’s got a square-jawed handsomeness, glasses, good posture, and gift for pairing a brown shirt with another shade of brown pants—that he slowly complicates by peeling back layers on Bruce’s desires, anger, frustrations, and, ultimately, insecurities. He’s the black hole at the center of the Bechdel family universe, the force affecting everything around him. Even with all of grown-up Alison’s efforts to understand him, he—and his decisions, be they to live a closeted life or to step in front of a Sunbeam bread truck four months after Alison came out—will remain forever unknowable, and Denman does a magnificent job of bringing a ghost to life.

The entire cast operates at this impressive level. As Alison’s mother Helen, Dawson at first feels like just another one of the nice things Bruce likes to have around the house, until she sings “Days and Days,” in which she distills a lifetime of stress and anxiety into a showstopper of a solo number. It’s a rough go, and Dawson absolutely slays it. I don’t know if all the Alisons worked together to trace an evolution of their character’s walk, body language, and demeanor, but Prestinario, Darrell, and Lyons do an impressive job of making Alison seem like a series of nesting dolls, where you catch a glimpse of a movement in small Alison that becomes the neurotic gestures of medium and grown-up Alison.

Don’t be surprised if you leave with the name Molly Lyons, who plays small Alison, seared into your memory. Fun Home gives small Alison the musical’s indelible, signature moment, “Ring of Keys,” in which a young girl experiences that first sense of who she is and could be after seeing an old-school butch delivery woman while eating at a diner with her dad. It’s meant to be crushing, and—like the entire production itself—it delivers.