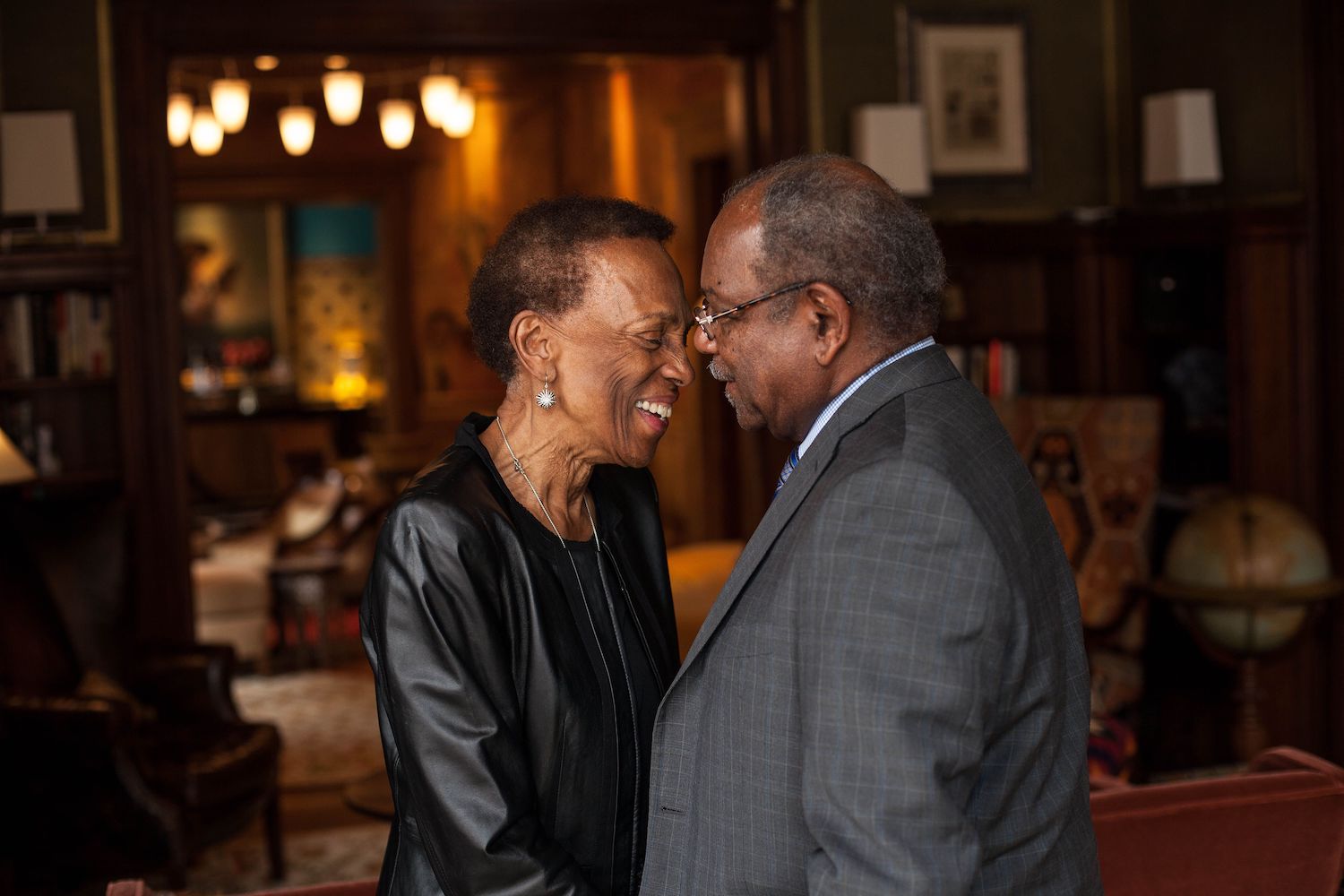 The Baltimore-Based Philanthropists who gave $3.5 [...] 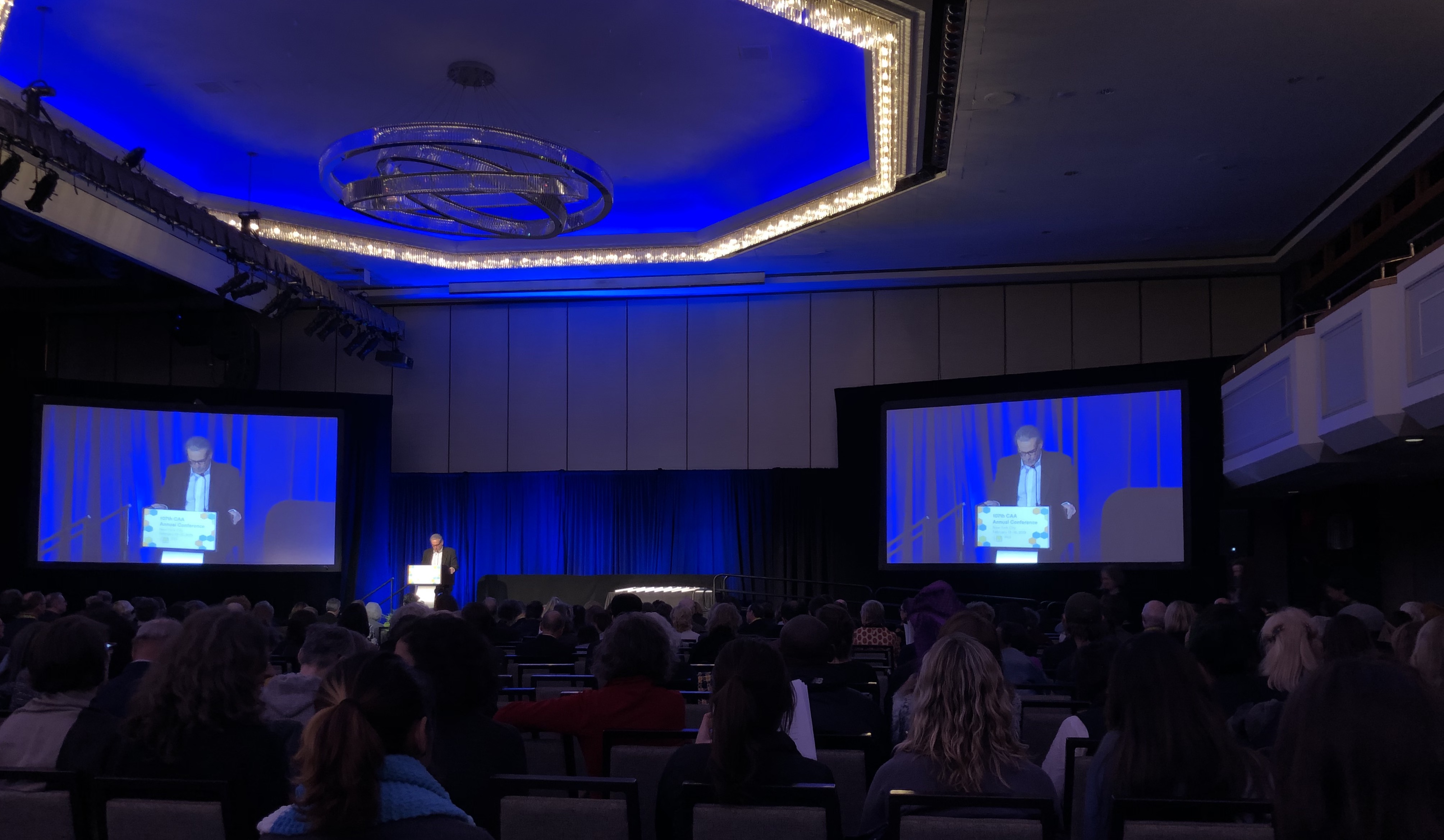 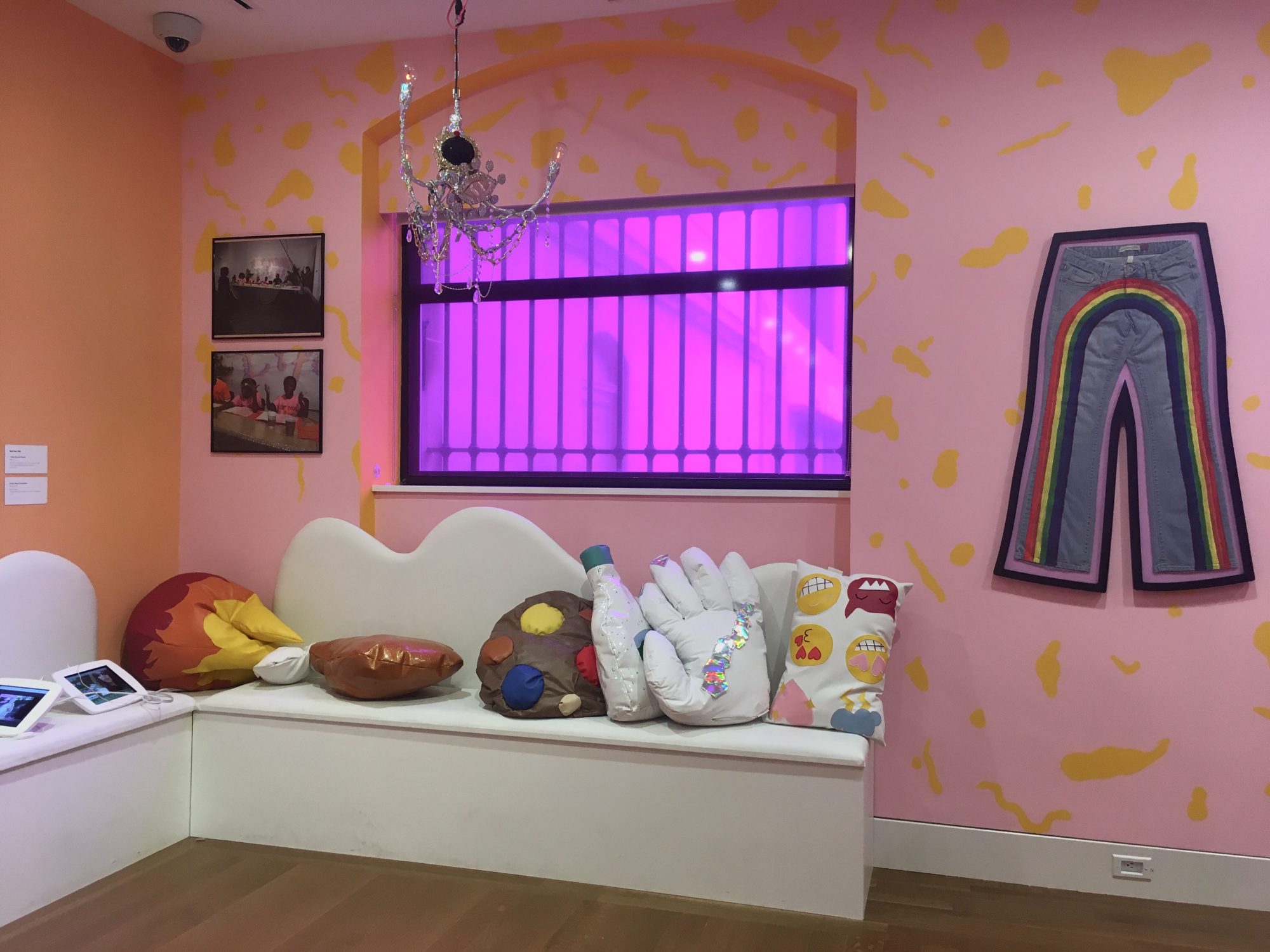 Get Your Life! at the BMA, Ellie Dent: Don’t Worry Your Head at Terrault, and Austin Eddy and Jack Coyle at Resort

Welcome to the first installment of the Friday Gallery Roundup, a curated compilation of three short reviews of three art shows we’ve recently seen that are worth your time and consideration, too. There’s so much to see and do in this town every day—check out our calendar and weekly picks for even more options—but here’s a doable list of shows you can check out this weekend. This week: the funny, wiggly Get Your Life! at the BMA; Ellie Dent’s moving explorations of illness and the medical industry at Terrault; and Jack Coyle and Austin Eddy’s colorful solo shows at Resort. 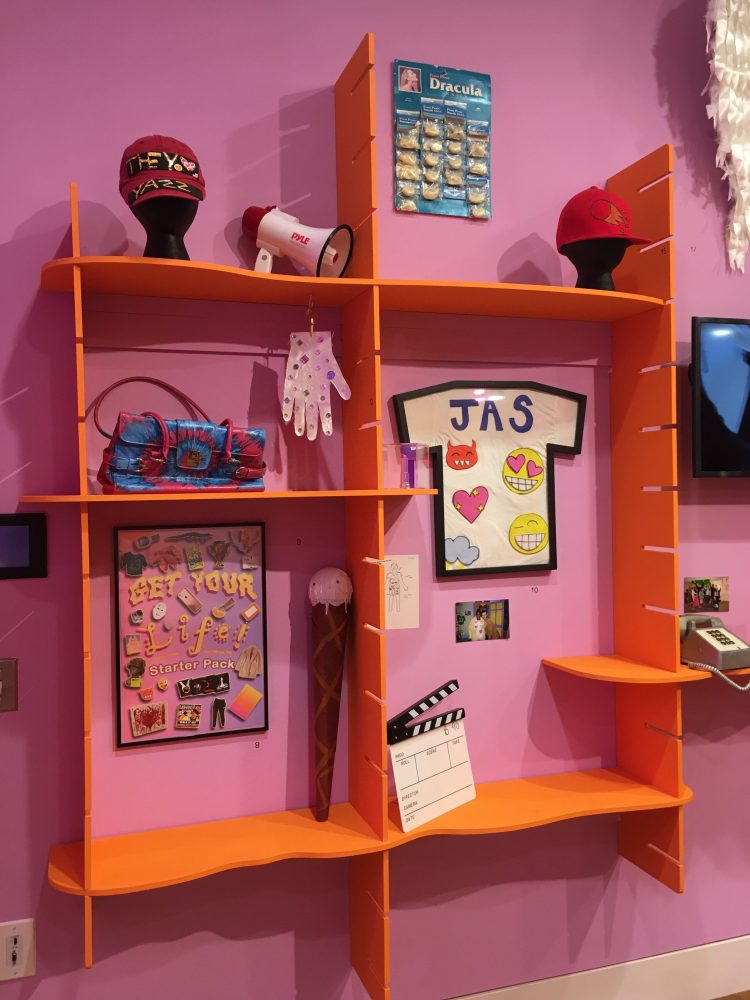 Full disclosure: I’ve already written in a slightly longer form about this colorful exhibition that features videos, props, sketches, and other assorted performance-ephemera from Get Your Life!, the youth-led video production company that grew from artist Lee Heinemann’s collaboration with Waverly community arts center 901 Arts. But this is a show that’s worth revisiting a third, fourth, and fifth time. In some ways it’s like an IRL Where’s Waldo or I Spy: How many chicken wings can you find? How many bottles of ranch dressing? In which video does this satin, bejeweled glove appear? Or this yellow, sculpted-foam muscular torso?

There are many great, youth-oriented art programs around this city—there ought to be more, and we need to support the ones we’ve got. We also rarely get to see the art that Baltimore youth are making, but right now this BMA show offers a glimpse of GYL’s imaginative, hilarious, free-feeling ethos. (Speaking of support: If you can, buy one of the GYL catalogues—featuring essays by Deana Haggag, Delali Ayivor, and Lex Brown, along with photos, pre-production notes, and games—from the museum’s gift shop; all of the proceeds go back to 901 Arts.) 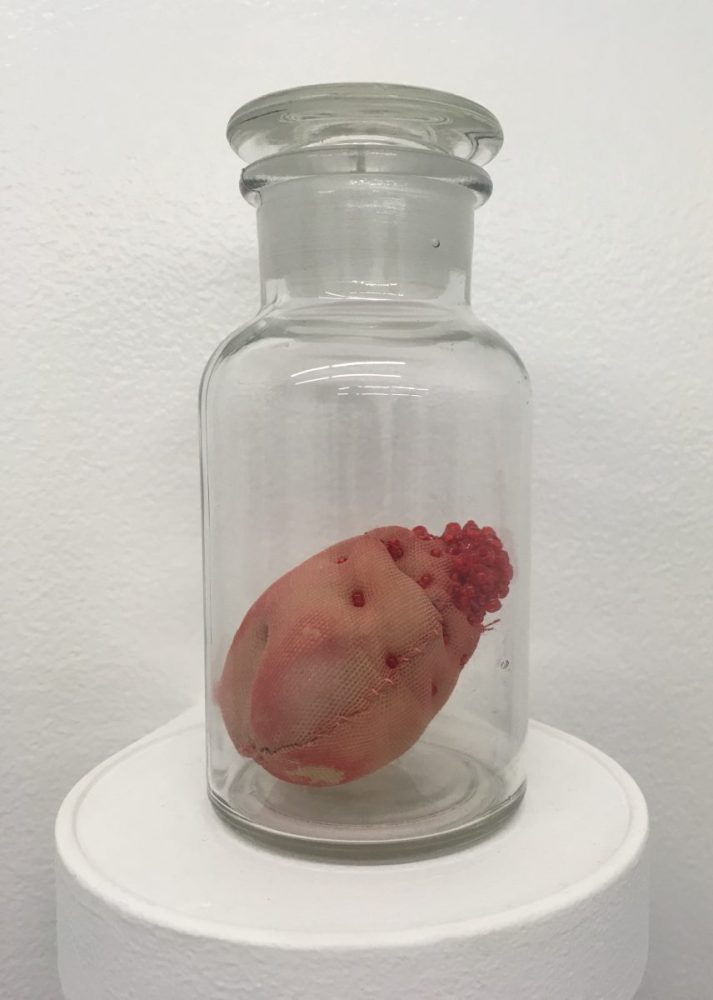 It’s easy to get squicked out by Atlanta-based artist Ellie Dent’s work. Six hospital gowns, seeping with lumpy, suggestive stains of red, hang like wounded ghosts from a large metal ring. A series of specimen jars contain what look like intestines, little hearts, and brains suspended in fluid—but then, up close, are clearly sewn and stuffed fabrics, with stitches thick like they’re fresh or infected, adorned with shiny beads. I think I’m supposed to interrogate my gut reaction, but instead I’m dissociating slightly from my body, thinking about its major and minor illnesses and wounds, some visible and others not, the scarring and leaking and all of those workings that I separate from my actual self.

Elsewhere, several dirtied blue hospital socks are clipped to a metal rod, each sock embroidered with baby-pink cursive platitudes like “take care of yourself” and “it’s time to move on”—phrases that mean well but echo emptily when you’re the recipient, regardless if you’re a patient or a concerned family member, friend, or caregiver. In the gallery’s semi-enclosed corner, a number of paper scrolls used to cover doctors’ exam tables and chairs unspool from ceiling to floor. Delicate and abstracted cuts, scrapes, and bruises pattern the paper, surrounding the viewer with an overwhelming record of pain, and perhaps it is here that I consider what it means to examine a wound in order to heal it. 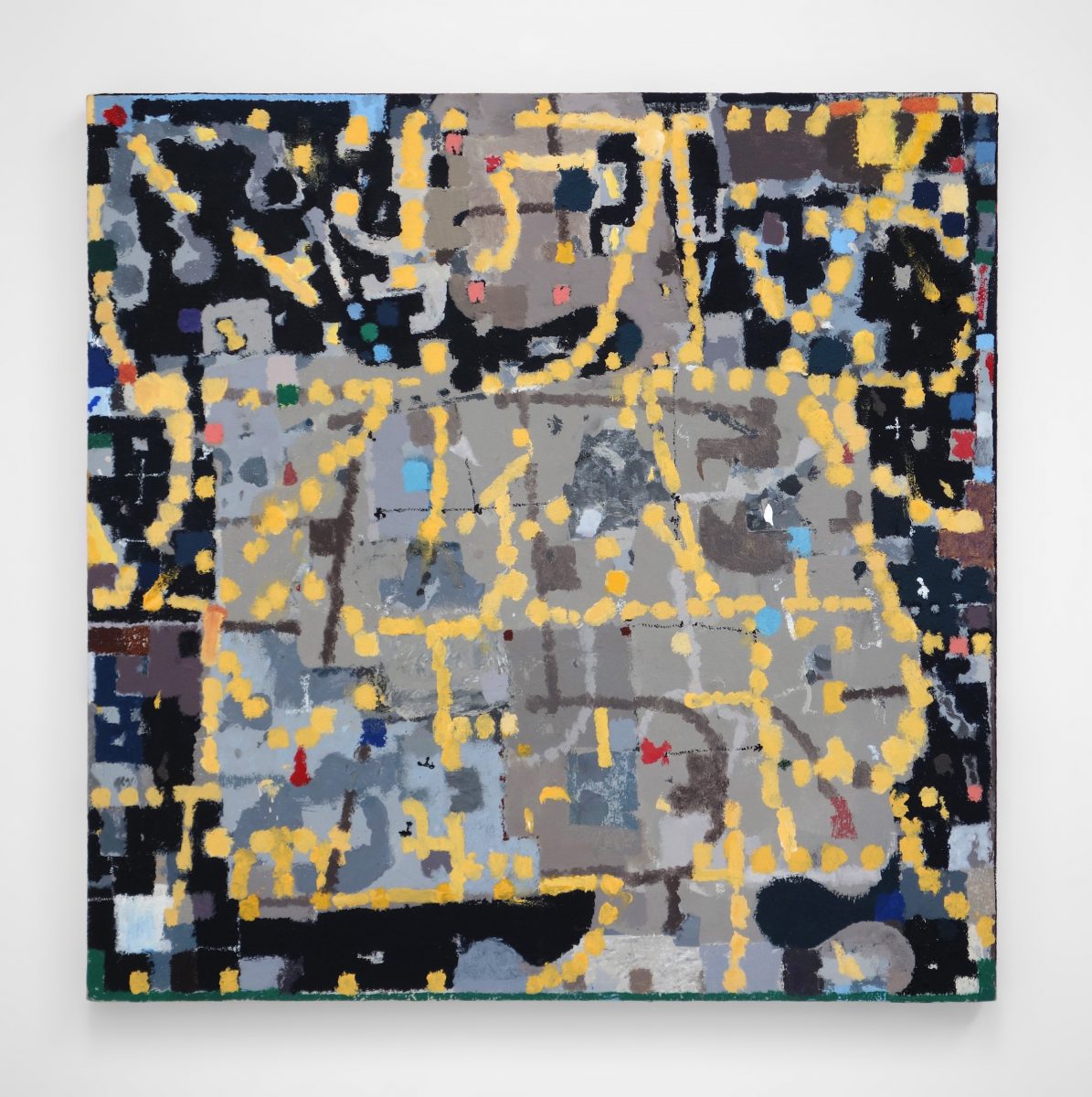 At the opening last weekend for these two shows I was kinda charmed by the kid-craft-like sculptures by New York artist Austin Eddy in Resort’s storefront display; those small, boxy structures with bright, flat colors, two of them holding clock mechanisms, marking seconds but not marking time, really. Inside, Baltimore artist Jack Coyle’s toy-like approximation of a cannon, all gloopy and dopey and semisoft, made me laugh. So did a few of the other works in his solo show, like the diagrammatic doodles of man-made machines (impractical buildings-on-wheels, some resembling oil rigs), jocular studies of power, form, and function.

Coyle’s bigger paintings read like dilapidated billboards with peeling layers of color, conflict, and illegible messaging, while his smaller paintings seem built upon systems and structure in the most literal sense. In “Power Trails,” a central shape is composed of blocks of warm and cool gray, surrounded by darker tones and occasional pops of color, and layered with strings of yellow daubs of light—like some nighttime cityscape, seen from above, always awake. In back, Eddy’s work continues, several small framed drawings hung onto a wide, grass-green stripe painted on the wall. The drawings, all flat and done in red, yellow, blue, and green ink, feature abstract snaking shapes and gameboard-like compositions—kinda like baby toys, but vintage ones, before they all became noisy, maximalist nightmare-objects. Eddy’s drawings seem off the cuff and reactive, but to what it remains playfully unclear.