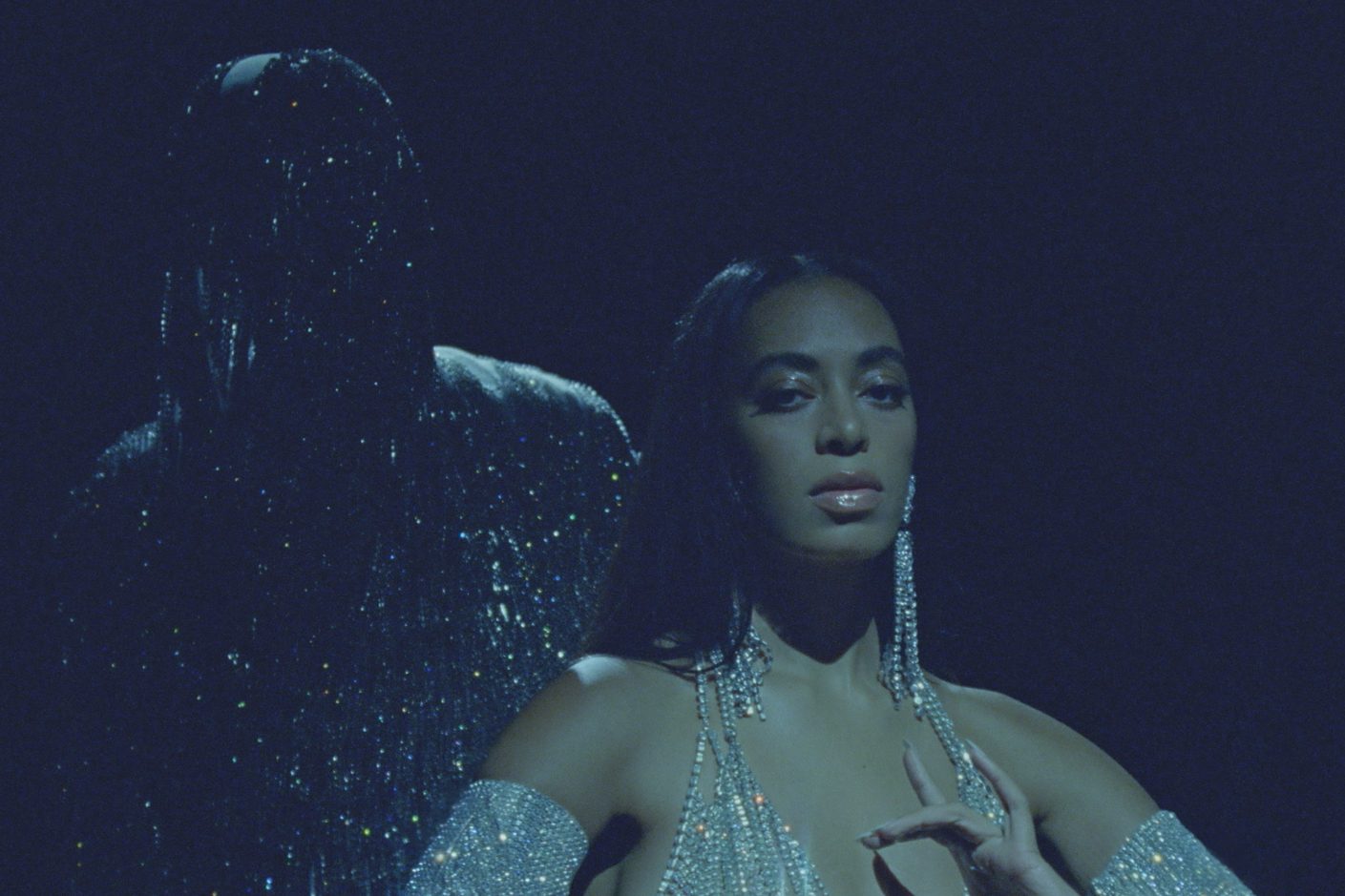 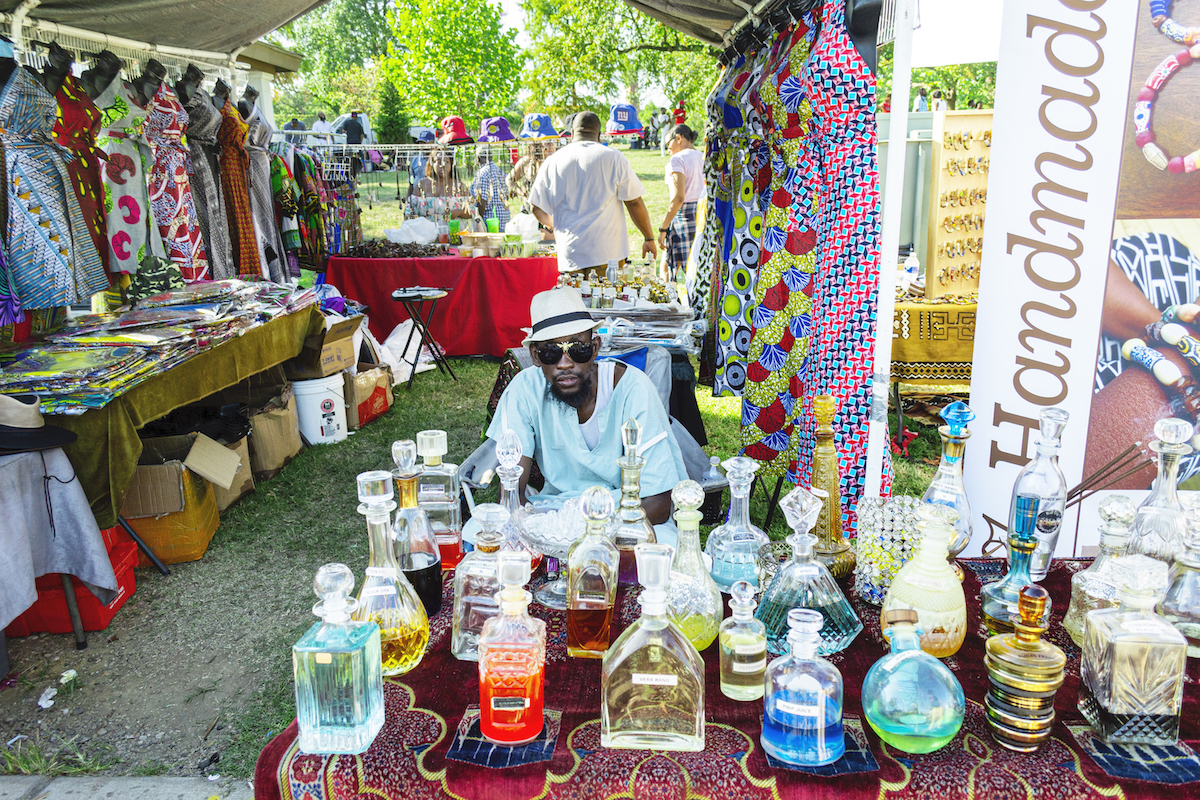 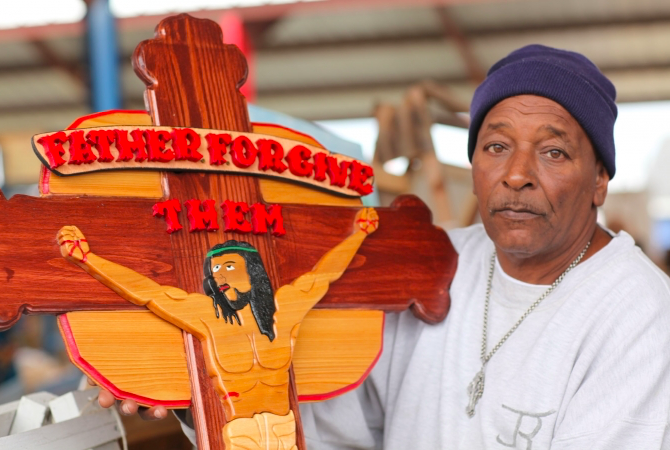 Rich in tonal texture and shallow in its cropping of the figure, Chandra McCormick’s photograph “Daddy’O” (2004) pays homage to the oldest living prisoner ever held in the Louisiana State Penitentiary (also known as Angola). McCormick’s photograph puts a human face on the inhumanity inherent to mass incarceration, monumentalizing the figure in a symphony of line, angle, and light. With his head lowered and one hand on his heart, Daddy’O leans his body against a tree, the support holding not just physical weight but psychological weight as well; whether caught in deep reflection or a mere moment of rest, the photograph magnifies the power of documentary photography to capture the inner and outer realities of its sitters no matter their background or social station and places great emphasis on the embodied qualities of human struggle.

For almost 40 years, Chandra McCormick and her husband and collaborator Keith Calhoun have been building an archive of photographs, oral histories, and films that stands as one of the most important visual records of working conditions and social life in the American South. The duo’s long-term commitment to documenting Black and immigrant subjectivity in their native New Orleans makes their legacy as artists, stewards of social justice, and true advocates for their communities crucial to the artistic conscience of Louisiana. Using a monumental and confrontational style, their photographs challenge the romantic mythologies of New Orleans as a city devoid of social ills and the Deep South as a beacon of charming hospitality in order to face the deep scars of poverty, racism, and inequality that have structured life in Louisiana for centuries.

While the duo’s reputation has long been well-established in their hometown of New Orleans, presentations of their work in New York, Venice, and currently in the Baltimore Museum of Art’s exhibition Slavery, The Prison Industrial Complex: Photographs by Keith Calhoun and Chandra McCormick, point to the resonance of their work for contemporary audiences beyond Louisiana state lines. But instead of merely re-presenting the experiences and testimonies of individuals suffering behind bars within the restrictive and domesticating conditions of the gallery (as other exhibitions sometimes do), the BMA weaves in extended information about the individuals represented in the images and films as well as information about national organizations and research initiatives dedicated to fighting mass incarceration, thus offering clear “next steps” for gallery-goers on how to participate and advocate for the shrinkage of for-profit prisons in our region.¹ By mobilizing the works on view in relation to the urgent issues they address, the BMA creates a model for what a socially engaged exhibition should look like, and what it means for art institutions to face—and thus be accountable to—the communities they serve. 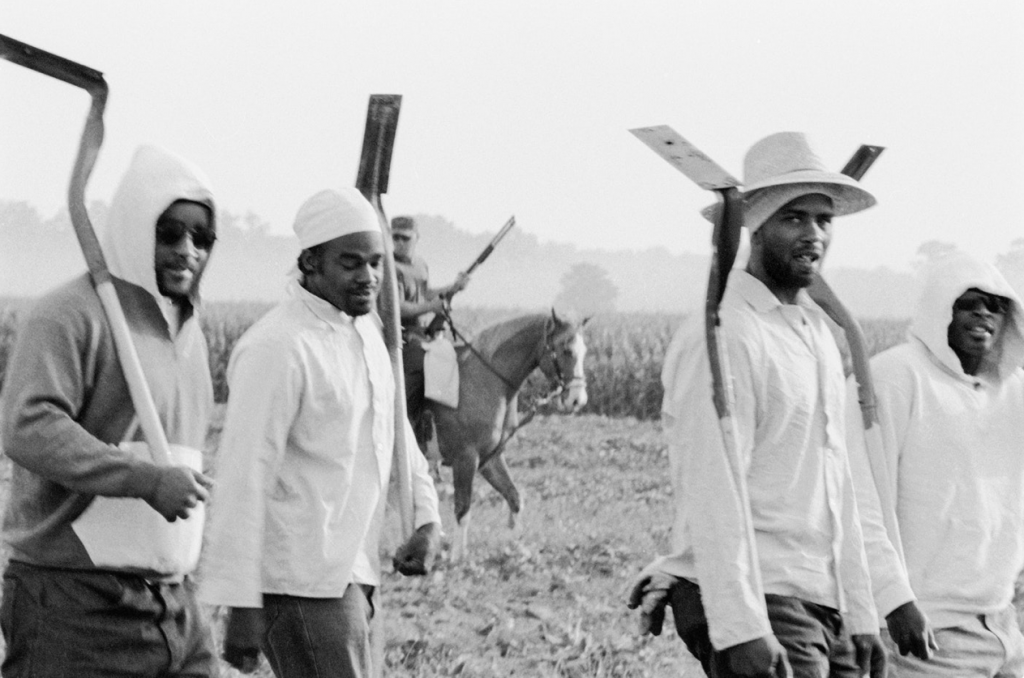 Chandra McCormick, “Men Going to Work in the Fields of Angola” (2004)

Institutional accountability begins with the subject of Calhoun and McCormick’s work: incarcerated men at Angola—a complex named after the former slave plantation upon which this prison stands that continues to derive its profits from the production of cash crops such as wheat, corn, and soybeans. Due to the scale of its population and geographical size, Angola is the largest maximum-security prison in the United States.² Calhoun and McCormick’s photographs find a visual pitch that can stand against the United States’ most brutal example of prison labor in existence today and the horrific slavery-like conditions these men are forced to endure.

Before the Civil War, Angola Plantation produced 3,100 bales of cotton a year, a number greater than any other slave plantation of its era could match. Flash forward to the 20th century, Angola became a site for a state-sanctioned convict-leasing infrastructure to support the establishment of a raw materials manufactury on the premises, which still exists to this day, running on the exploitative toil of its prisoners. Cases of prisoner maltreatment, torture, rape, denial of healthcare, unsanitary conditions, and, more recently, allegations of “slavery and slavery-like conditions” by the ACLU have prompted questions about the prison’s history and commitment to rehabilitation, and the constitutional validity of for-profit prisons more widely. While the 13th Amendment bans involuntary servitude, it does not extend to persons convicted of a crime, a loophole that directly connects conditions of incarceration to slavery and forces a consideration of the inhumane consequences of privatizing prisons.

Divided into four sections, each of which articulate significant prisoner experiences, the exhibition groups Calhoun and McCormick’s work into specific themes with formal choices and stylistic attributes that run clearly throughout each unit. The mark of time is plotted by the photographers’ move from black-and-white to color images, not only acknowledging the ways in which the duo’s documentation of prisoners (begun in 1980) carries on into the “now,” but also the different visual potencies of each. Black-and-white photographs such as “Daddy’O,” which comprise a majority of the exhibition, convey the kind of grandeur and seriousness associated with fine art traditions and museum values. They monumentalize figures and forms, deepen contrasts of light and tone, and thus emotionalize (or perhaps fetishize) subjects in the process.

But color photographs have powers too, and mark their distance from the antiquated technologies often associated with a visual culture of “pastness” in order to resonate with the high-definition color fields of “presentness”—the now, and all its urgency. Calhoun’s “Artist, Angola Penitentiary” (2013) articulates this notion, reminding us of the endless archive of casual color photographs stored on our laptops, disposable cameras, and cell phones of family members and friends posing in their daily lives, and the deep gap between them and these prisoners whose everyday experience is marked by violent and inhumane treatment. By including both color and black-and-white photography in this exhibition, Calhoun and McCormick’s work speaks for and against the image as a communicative tool that can operate inside, outside, and in-between the museum space. 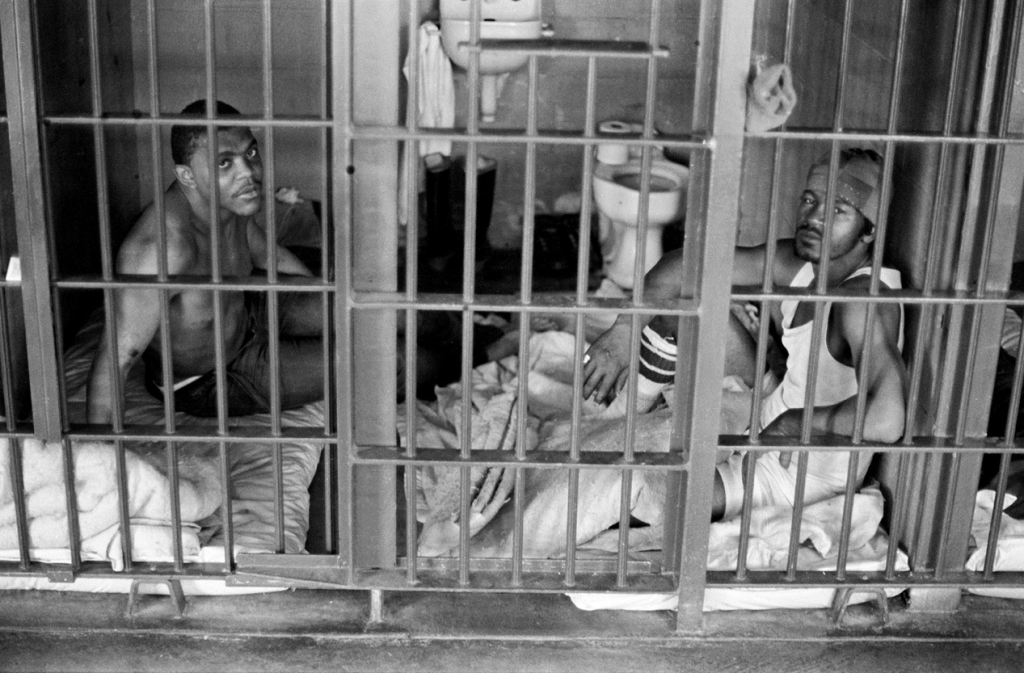 In the still photographs—the most well-known of Calhoun and McCormick’s work—subjects are often photographed alone and in close range, their faces, hands, and accessories pressing up against the borders of the photograph, demanding an intimacy with the viewer. But there are constant reminders that closeness in Angola is at times deeply restricted and never fully possible. In McCormick’s “Father Forgive Them” (2013), the viewer is engaged at eye level with an Angola prisoner cradling a religious icon he made while serving time. (Arts and crafts are an important part of the reward system in Angola, and have become a beacon of hope and creativity in spite of the prison’s dehumanizing setting.) The prisoner’s face is relaxed but sullen and the weight of the object is visible in the man’s body, creating tension with the joyous posture and message of the icon he holds.

In Calhoun’s portrait, “Glenn Demourelle Served 27 Years in Angola State Prison” (1980), the iron bars of Demourelle’s cell interrupt our ability to see the subject’s entire figure and block our ability to access his space—a powerful method of articulating the ways in which prisons function to dehumanize prisoners through architectural choices and bodily relationships. 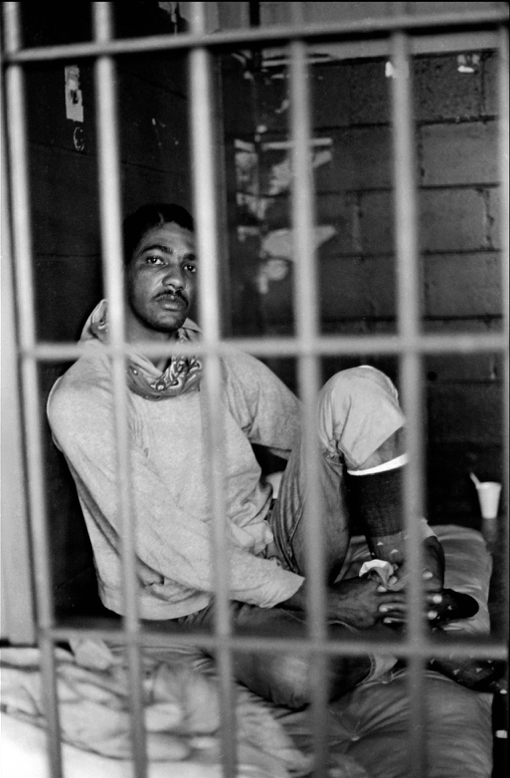 While the still images are powerful, the filmed interviews and testimonies animate the prisoners and their conditions by giving voice to those rendered invisible and silent within the compound and society at-large. Films, when included in museum exhibitions, are often unmemorable additions, allowing viewers the opportunity to relax—or worse, disengage. However, in this exhibition, the films not only enrich the context of Angola but enliven the ongoing struggles of former prisoners to define their lives after incarceration and render meaning from an experience unconscionable to most.

The filmed interview of former Angola prisoner Henry James Jr., who was sentenced to life without parole in 1982 for a wrongful rape conviction for which he was released in 2011, will live long in my memory, and stands as a potent example of what moving image can to do activate urgent issues and questions. The film recounts a range of deeply personal, violent, and psychologically traumatizing events in James’s life in Angola, from the constant struggle to sleep at night for fear of bodily harm, to his love of woodworking classes when the pain and stress of prison weighed heavily on his mind. The bench that viewers sit on to watch the film of James’s testimony is one of his own, a powerful and tangible way of inviting his skill and story into the room.

Listening to James recount his experiences forced me to not only think about the power of images to encourage empathy, sympathy, and action, but also to consider who this exhibition is for. What kind of viewer is expected to read these wall texts, watch these films, and engage with these images? Is it enough for institutions to put socially engaged work in their galleries and hope that audiences will be moved to respond? Are institutions creating conditions for the public to invest in these difficult issues? I do not have definite answers, but I know that art institutions must keep going, keep creating space. In an era of Black Lives Matter, Calhoun and McCormick’s work demands an acknowledgement of the enduring legacies and costs of slavery, Jim Crow, segregation, and mass incarceration in the United States, all of which continue to shape American experience at every level. Angola is not just Louisiana’s issue but everyone’s.

[1] Next steps are provided in the galleries and on the BMA’s website, including information about grassroots organizations such as the Maryland Justice Project, which offers volunteer opportunities to work alongside rights advocates for formerly incarcerated citizens and Out for Justice, an organization for those affected by the criminal justice system and who advocate for prison reform and rehabilitation programs inside and outside of the prison system. For more information and to learn how to get involved, visit the following links: https://www.marylandjusticeproject.org and https://www.out4justice.org

[2] At the time of writing, Angola holds 6,821 prisoners and stands on 18,000 acres of consolidated sugar and cotton farmland.

Slavery, The Prison Industrial Complex: Photographs by Keith Calhoun and Chandra McCormick is on view at the Baltimore Museum of Art through October 27. For more info, visit the BMA’s website.

All photos courtesy of the artists / BMA