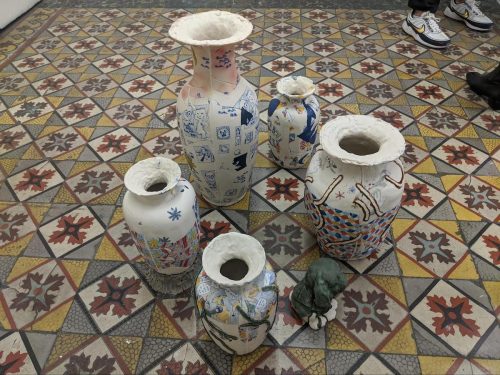 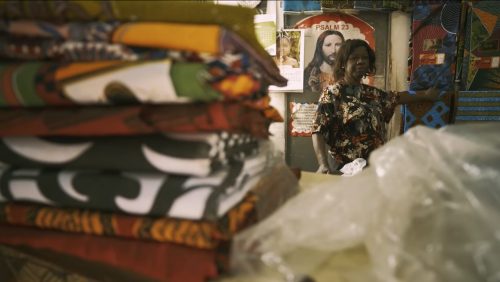 Visual Art
Mexico City Art Week: Day Two
What's up in the capital's best galleries within walking distance of each other in Roma Norte 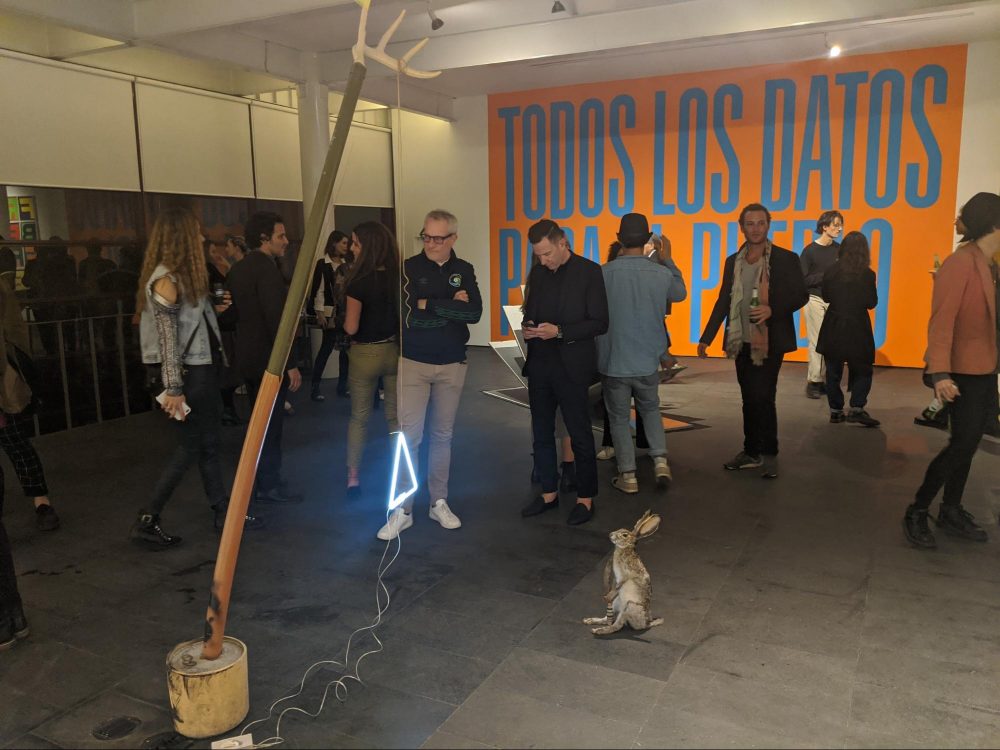 We’re in Mexico City to report back from Latin America’s biggest week of art fairs and all the satellite exhibitions, performances, and parties that it entails.

On our second day, my gallery-hopping companions and I opted for a different strategy from Monday’s “let’s try to see it all” approach. We carefully curated an itinerary of the art openings we definitely wanted to see at some of the capital’s best galleries within walking distance of each other in and around Roma Norte—these are the kinds of shows you need to see in the flesh. Photography never really does justice to good painting nor multimedia installations.

I could’ve spent a whole week with Pia Camil’s playful mixed-media canvases, each bearing a record of different mark-making techniques. In Ríe ahora, llora después (Laugh now, cry later) some works veer close to full abstraction, while others carve sketchy figures from their painterly backgrounds. Some feature crying clown-like faces, others are more ambiguous jumbles of anatomy. Most have bittersweet platitudes scrawled along their borders. One of my favorites renders a washy Grim Reaper with just the right economy of gestures, ominously framed by the text “KNOCK KNOCK.” The show feels like a combination tarot deck and tongue-in-cheek collection of condolence cards.

But this is probably the only time anyone has ever made a pilgrimage to OMR’s brutalist temple to art and thought “This might be a better art fair booth than gallery show.” There’s so much good work here—and so much of it very visually busy—that it’s a bit overwhelming. I’d like to see the very best five or six cream-of-the-crop canvases alone in a more “intimate” setting. That’s an odd criticism to have of a show—after all, most of these are good—but I’d love to see this body of work edited down to those that are excellent.

But speaking of fair booths, you can probably skip the group show in the upstairs gallery. I’m pretty sure I’ve seen some variation of literally every work in this room at some art fair in the past five years, and it’s all pretty unremarkable collector fodder.

Yoshua Okón’s playful, politically charged work always holds a pleasant (or sometimes uncomfortable) surprise. Entering the gallery, visitors are greeted with a cheeky video listing the exhibition’s “sponsors,” which supposedly include entities such as Mexican government agencies and political parties, major newspapers, and even the government of the United States of America. It’s a fitting introduction to Okón’s trippy critique of life in an increasingly surreal neoliberal dystopia.

The main gallery is dominated by two seemingly unrelated installations. One is an all-pink set evoking a domestic space, in which a two-channel video plays. A British woman (played by different actresses) in a red pantsuit with an official-looking nametag leads us through a tour of nearly identical suburban homes. Slowly she breaks down, smashing a laptop as she flops on the ground, then hyperventilates in a juvenile bedroom. It’s hypnotic and reminds me of those “can’t look away” property-homogenizing-and-flipping shows destroying various housing markets in the name of reality television. Other sculptures look like charred carcasses of endangered animals. Behind them, a small video screen shows them as mannequins melting in a burning Banana Republic. 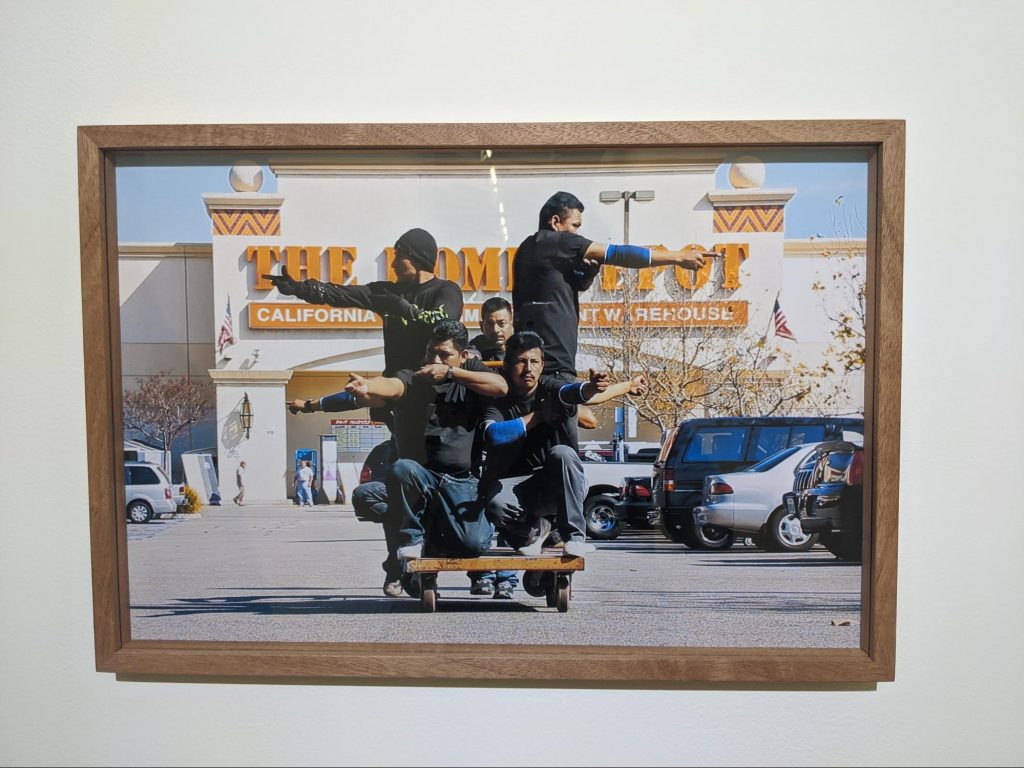 The back gallery features footage of right-wing militias along the US-Mexico border and an installation comprising a Gadsen flag with the snake biting an eagle (a reversal of the imagery on the Mexican flag). There are also cartoon-like storyboards of the footage, leading to an ambiguous relationship between the video and the drawings—is this a real documentary? Or are these scripted scenes of over-the-top characters firing guns, yee-hawing, and speaking incongruous lines about tolerance? It’s a profoundly unsettling work—moreso than the other humorous video/installation pairings in the show.

Galería Karen Huber is one of my go-to favorite spots to see painting in Mexico City. Specifically, it feels like the gallery has its finger on the pulse of what young artists and trends are about to make the leap from Mexico’s art underground to commercial success. The group show in the small project space exemplifies this curatorial ethos—it’s a nice selection of painters who have shown with the gallery and manage to make work that’s simultaneously approachable and fresh. This small exhibition features colorful, medium-sized pieces from Ana Segovia, Endy Hupperich, Keke Vilabelda, Luis Hampshire, Merike Estna, Andrew Birk, Héctor Madera, and Marc Breslin. It’s another one of those shows that makes me wish I had a collecting budget.

The main gallery is showing a series of paintings by Andrew Birk, an artist who has lived and worked in Mexico City but recently returned to his native United States. I’ve seen a few of Birk’s solo shows over the years, and this one is a bit of a surprise. The panels form a somewhat disjointed fairy-tale narrative, alternating stylistically but most managing to feel resolved in their own way. A few canvases are illustration-like, others evoke German Expressionism. Some are pretty creepy. One features the third ouroboros symbol I’ve seen in an artwork in the past two days! Why is the ouroboros trending? Maybe society is locked in an endless self-destructive loop of consumption? Who knows…

Speaking of zeitgeist, I overheard this bit of trend-watching wisdom at the opening: “People like whimsy now…. Terrifying whimsy.”

Every time I leave and come back to this city, I’m terrified by the breakneck speed at which gentrification can transform space. I can think of no better example of this phenomenon than the case of the Ex Fábrica de Harina. The abandoned industrial site in a not-particularly-desirable corner of the metropolis had been infamous these past few years as an underground nightlife hotspot. Think seemingly endless DIY raves with international crews of drag queens blowing designer drugs into each others’ orifices and maze-like cruising areas in abandoned grain warehouses. It was a wild ride.

This year, I was excited to see the site is hosting the Feria de la Acción, a new art fair with a performance-heavy program. We showed up late to their opening night party, but didn’t end up going in. Our friends were already leaving and the main fair wasn’t open to preview the art. But mostly we were all horrified at what had happened to our once-beloved abandoned flour factory.

None of us had been there for about a year, and found ourselves shocked at the transformation. The postindustrial space now feels exactly like a more self-contained version of Miami’s Wynwood. There’s a bougie pizza joint, streetwear boutique, and high-end sneaker store—all wallpapered with image-appropriate “street art” and signifiers of “edgy adaptive reuse.” (At some point in the past few years, real estate developers seemed to decide unanimously that millennials liked doing basically anything in stacked shipping containers, for some inexplicable reason).

To top off the carefully curated Instagram-ready aesthetic of the shopping center, there’s even a selfie mirror built into one of the murals. The whole redevelopment feels basically ten years too late at being the wrong kind of bro-centric trendy—as if a baby boomer investor based their idea of youth culture off of the advertisements in a very old issue of VICE Magazine they found next to the toilet in their stoner nephew’s bathroom.

I’m sharing this minor tragedy as a cautionary tale—enjoy Mexico City’s real weirdness while it lasts, and as a visitor, be careful not to buy into the theme-park-ification befalling nearly every global destination city.