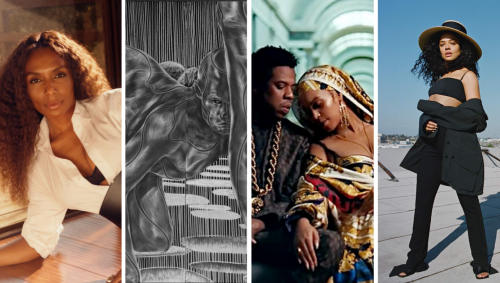 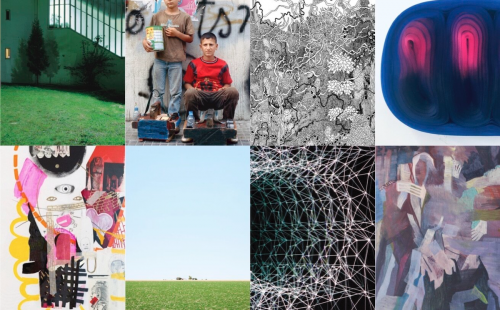 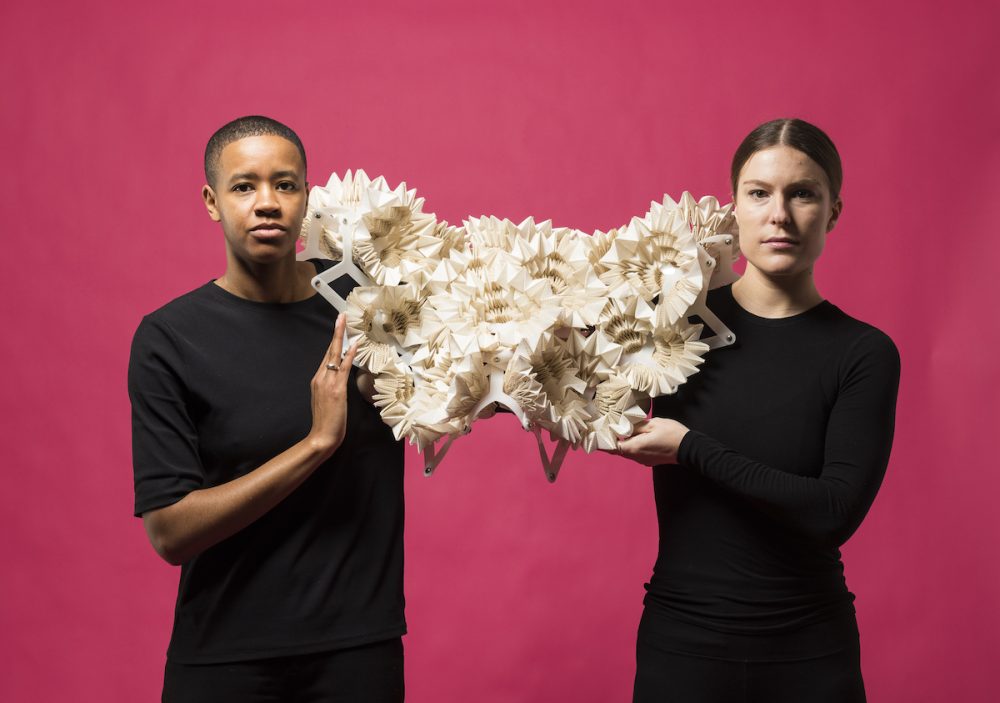 Annet Couwenberg’s studio feels like the best kind of art laboratory. Located in the surprisingly spacious basement of the Lauraville home she shares with photographer Dan Meyers, her partner, there is everything a tinkerer could desire within arm’s reach. Bits of laser-cut fibers, plastics, thin wood, and models of digitally printed sculptures are organized neatly on high tables and stacked on shelves in every cranny of the basement. “I see this as my learning space,” Couwenberg says.

Nature’s influence is embedded in the works standing at attention in various stages of completion about the room, breathing like the skeletal remains of past/future organisms. Couwenberg, a titan of fine-art fiber education who’s been teaching for more than 40 years, is influenced by growth and evolution, which she excavates in an exploration of her personal history as a Dutch woman living in America. And over the last several decades, she’s incorporated computer technologies into her textile-based studio practice.

That studio investigation begins with the body, an entry point where traditional craft and technology can meet in the physical world. Couwenberg dreams of being a “digital puppeteer,” making interactive works from responsive textiles. She calls these future pieces living organisms but feels she is a few years from making something that can function the way she envisions, using sensors to respond to human touch, which she says is our “only reciprocal sense and that is an important part of how we work as craftspeople.”

I went back to the Dutch collar because it is a contradiction in itself. It's constricting, but it's beautiful. I was interested in the idea of how you go from a 2-D plane to a three-dimensional form. What happens in that transition? 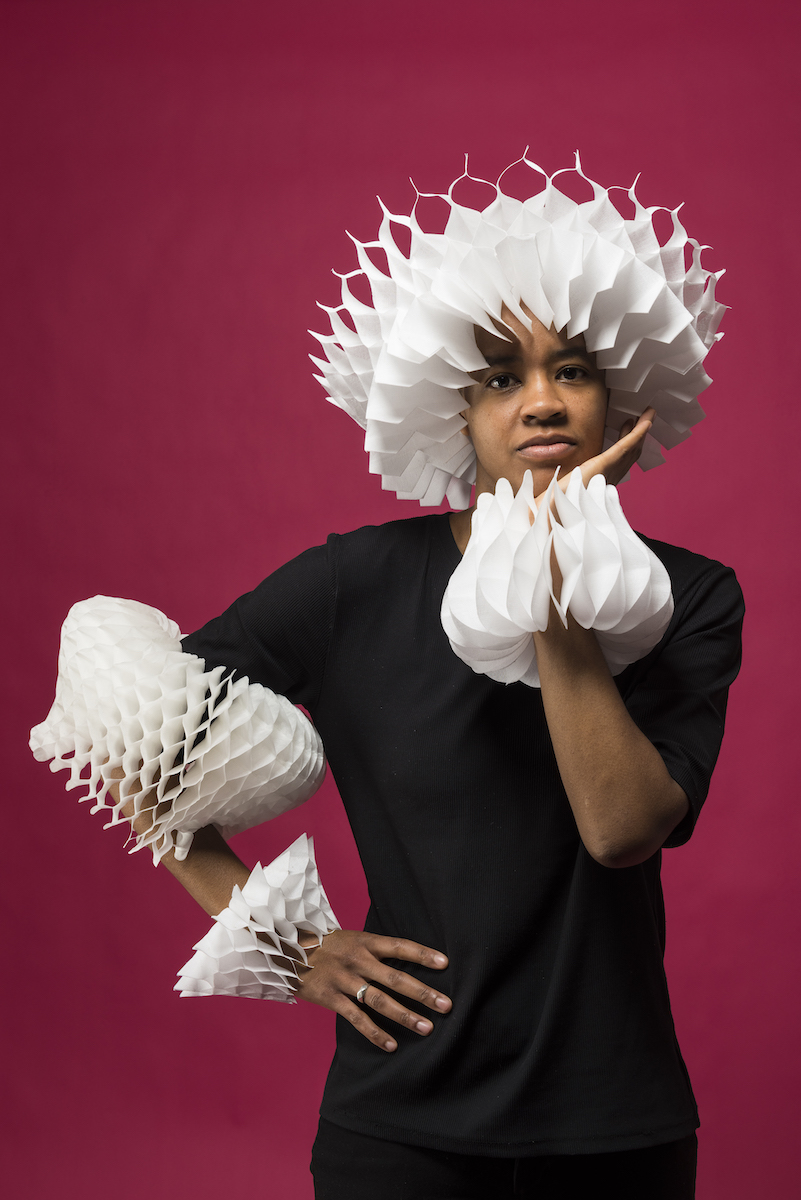 Couwenberg believes crafts are meant to be held, worn, and used, and an audience should consider “the body as a tool manipulating digital information,” which grew out of a background in fashion. While earning her first MFA at Syracuse University, she made jackets for the celebrated and now-shuttered boutique Julie: Artisans’ Gallery in New York and worked with fashion designer Ronald Kolodzie. She quickly realized the fashion industry was not for her in 1982 while interning at Haystack Mountain School of Crafts, where she found “a place where people are willing to take real risks and who are thinking about community and not competition.” She has self-identified as a craftsperson ever since.

Couwenberg collaborated with her family for the photos accompanying this story, negotiating poses, lighting, and arrangement of limbs with her sculptures. These collars, which have previously been shown on pedestals with acrylic casing surrounding them like preserved specimens, do something very different when they’re on a body: They’re being stretched just a little to accommodate a hand or a head, an activation that makes them seem to breathe with their wearer. They go from being a static object to a living skeleton full of tension and possibility.

Called “Dutch collars” because of their prominence in 16th-century paintings by Frans Hals and his contemporaries, the collars Couwenberg draws from actually hail from Spain; the Dutch appropriated them to function as a status symbol. Stark white and made of handmade, often Italian lace, they indicated their wearer was not a laborer. As a girl in the Netherlands, Couwenberg admired Hals’ and Rembrandt’s paintings, which are still celebrated by portrait painters today for the ingenious way the lace bounced light back on the sitter’s face.

I'm a person who is concerned about the human condition. That's the reason why I'm still in Baltimore. We do things together. There's no hierarchy here and I love that. We're all equal. Craft does that in a sense: it talks about humans and it talks about community.

Couwenberg’s Dutch Calvinist upbringing has influenced both her process and works, as evident in the readily available materials from which she draws inspiration and the clean designs she often cuts into them. “I was taught that I needed to work hard and shut up,” she says. “My mother would say, ‘Act normal and you’re acting crazy enough.'” Couwenberg studies how this mindset—being taught to value hard work and the collective good over individual desires—is passed or lost to another generation. “It’s actually the great thing about being a mom, seeing that lineage, what is left over,” she says, followed by a laugh.

As a textile artist, Couwenberg is quick to identify as a craftsperson, explaining that the familiarity of materials like cloth build up craft’s accessibility while the lack of ego makes it democratic. “I feel like I have to honor where I came from,” she says. “I’m a person who is concerned about the human condition. That’s the reason why I’m still in Baltimore. We do things together. There’s no hierarchy here and I love that. We’re all equal. Craft does that in a sense: it talks about humans and it talks about community.”

An inextricable aspect of all craft is labor, as many artisan processes require doing things over and over and over again. Repetitive labor is “embodied knowledge or cognition,” Couwenberg says. “It’s not only material we feel, but the repetition we learned.” The expertise that comes from making is central to craft. Weaving, for example, can feel like meditation, and in the resulting cloth what Couwenberg calls “the handwriting from the day before” is readable in the work’s tensions and inconsistencies.

Plus, a weaving pattern is so much more than decoration; it’s information. Computer scientists consider the Jacquard loom the first computer because it produces a product based on a provided program. Invented in 1801 by Joseph Jacquard, the first looms took their codes from punched paper cards; their contemporary successors use computer files to denote the same oscillation of warp and weft. Couwenberg explains to her students, “If we think about weaving as binary code and you think about under and over, we need to really start paying attention” to what we can learn from observing it.

Couwenberg currently runs her courses in MICA’s Fiber Department as a laboratory, a role for which she received the College Art Association’s Distinguished Teaching of Art Award earlier this year, only the second time in the organization’s 109-year history a self-identified craftsperson has won. “We should not, as a fiber department, leave the fringe,” she says, adding that the best part of being an educator is continuing to learn and question the world around her. “If you go with the mainstream, you lose your edge. I tell my students, ‘You’d better be articulate because they will not take you seriously because you’re a craftsperson.’”

Couwenberg recognizes that textile artists are “material scientists, but we do it in a different way,” she says, adding that she believes craftspeople can help technology because they’re process- and material-oriented. “We’re willing to give the time and repetition to listen to the material and to have that conversation.”

She points out that craftspeople have always been at the forefront of technology and able to adapt to the changes these advances bring about better than most, but now they can move with more ease between fine art and design. “You need to have discipline to be interdisciplinary,” she says. “The computer is changing our ways of thinking so much that the artist, designer, and the craftsperson are all liquid in between. We have different skills, but we need to remember that fluidity because we have to be at the same table as artists and craftspeople.”

Technology is moving forward and she doesn’t want to see craft left behind. One of her favorite classes, which she co-teaches with Ryan Hoover, is Unravel the Code, in which students draw weave drafts before they learn computer coding. Couwenberg wants students to learn by doing, just as she does.

In her own studio practice, Couwenberg has so neatly dovetailed technology with traditional craft methods that the two can’t be separated. The relationship between math and science is evident in Couwenberg’s work, the result of her frequent collaborations with lab technicians and engineers. In 2014, she received a Smithsonian Artist Research Fellowship that allowed her to use the Smithsonian archives and work with scientists who sliced mudskipper fish into fine slivers, which she manipulated to create laser-cut drawings. Couwenberg realized the slices of the fish skeleton essentially revealed itself to be a fine lace.

Collaborating with scientists “is learning to speak another language,” she says, pointing out that both scientists and artists use metaphors to discuss their work. “I realized that while we [artists and craftspeople] learn through repetition, scientists get knowledge by thoroughly explaining what they are doing.” Sometimes, the resulting collaborative work is a combination of both. For her 2017 show From Digital to Damask at the Baltimore Museum of Art, Couwenberg worked side by side with Jacquard weaving technicians to create her designs but admits that when she saw what came out of the machines it didn’t look how she thought it would.

She realized that “a pixel is not a thread,” despite their similarities, and reworked the designs significantly. “I’m willing to fall on my face instead of not knowing how to translate because digital space is different than working digitally,” she says. “I love digital space for the science.”

When not focused on negotiating a collaboration in a lab, Couwenberg is in her basement studio, drawing inspiration from her own life and the world around her. One piece in her studio is based on a cootie-catcher, another on the architecture of a dome in Italy, and a third inspired by corrugated cardboard. For some time now, her primary material has been buckram, a somewhat breathable, see-through, slightly stiff fiber. She began working with buckram because it allowed her to stay in the language of fashion—it was originally created for hat-making—and continued to use it because it cooperated well with the laser cutter. Couwenberg designs her patterns in Rhinoceros 3D, a computer-aided design software, and then lasers what she needs onto the buckram to create the repeated parts measured exactly for her work.

She made her first collar drawing in 3D Studio Max in 2001 and began working in earnest on the fabrication of them in 2003. “I went back to the Dutch collar because it is a contradiction in itself,” Couwenberg says. “It’s constricting, but it’s beautiful. I was interested in the idea of how you go from a 2-D plane to a three-dimensional form. What happens in that transition?”

Over time, the collars morphed in form and material, combining the skeleton and skin, with buckram and a flexible plastic most often used to make thin cutting boards for cooking. She sought out a material that could be cut on a CNC router and then molded into shape by hand. The inclusion is also a comment on America’s inability to quit plastic. Most recently, she has just used buckram and origami to study flexibility and interaction with the body. Within these collars, the form holds together the origin of the material, its history, and her heritage, knowledge culled from fashion and construction and equal parts Couwenberg’s commitment to craft and technology.