The Intimacy of Nightlife in Sydney J. Allen’s Photography 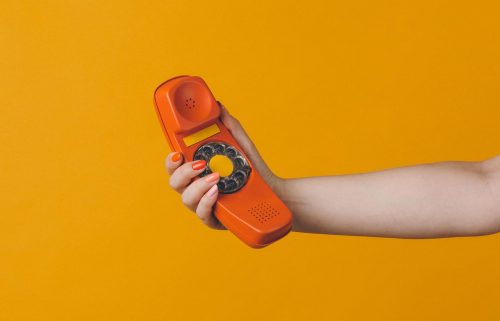 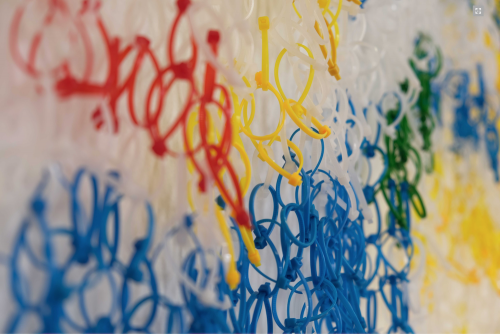 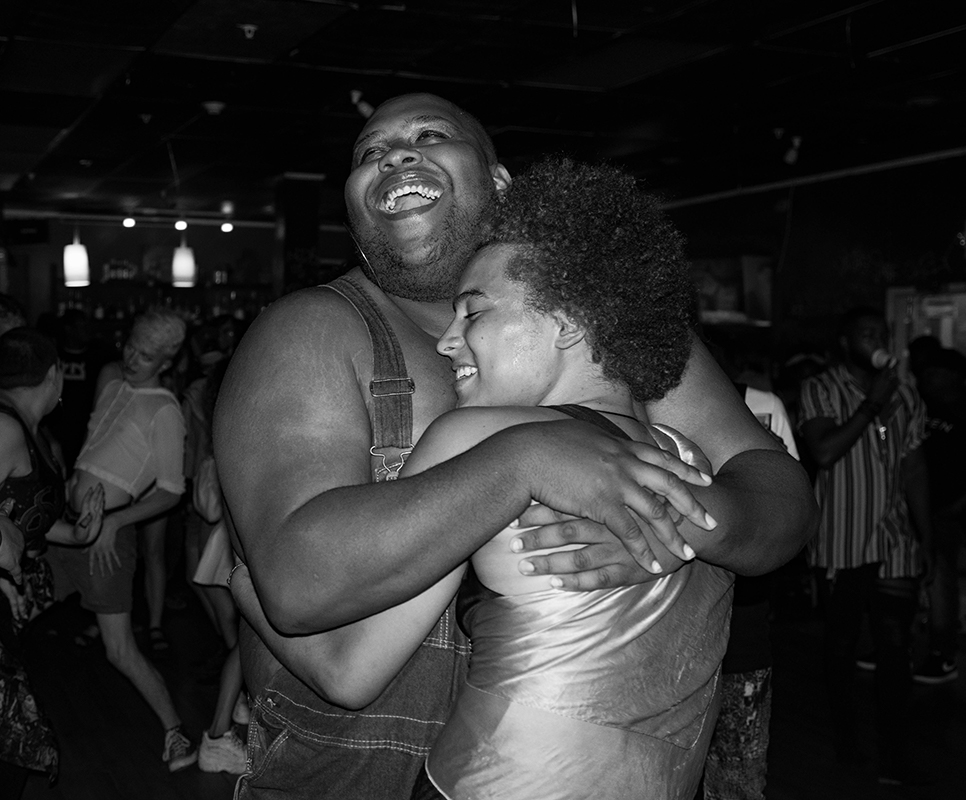 A crowd forms around a circle on the dance floor, and your favorite club beat pulses over the speakers. A quick impulse runs through, and you step into the center of the circle as it clears. It’s time to perform and break free from the stress and weight of the week. The circle is a ritual space of release, love, gratitude, bliss, and praise, and memories of this ritual come flooding back when looking at photographs by Sydney J. Allen.

Many folks know Allen from her stunning portrait work and her documentation of Version, a popular Black and LGBTQ+ dance party hosted monthly at The Crown. Her graceful black and white photographs of poet and teacher Meccamorphosis also illuminated Charles Street as part of LED Baltimore last summer. Mecca’s figure towered over pedestrians walking up and down the busy street near Penn Station, just blocks away from The Crown, where Allen has spent many nights over the past three years documenting the immense love and intimate energy at Version. Although Version has been put on hold due to the pandemic, looking at Allen’s images of the once-packed Red Room conjure stories of the many nights spent dancing, loving, and, in Allen’s words, “just existing.”

Allen’s path to photography was not linear—it was shaped by various life circumstances and an intuitive draw to the art form. She began with her first camera, a point-and-shoot that she received from her job in 2010, at the age of 18. “I was just using it to take pictures of my friends and documenting good times in Baltimore,” she says. In the midst of getting her first camera ten years ago and beginning to hone her craft, Allen found herself recovering from a major car accident that halted her photography journey.

After seven months of healing, she enrolled at Coppin State University as a Psychology major, believing that she needed to take a more “practical” path. After two years, though, she took a break from school and began working as a behavior support assistant in a Baltimore charter school to support students who struggle with emotional and mental health issues in the classroom. Allen says that the school’s dysfunctional and sometimes overtly racist environment ultimately redirected her back to a path toward the arts: in 2016, she enrolled at the University of Baltimore to pursue a degree in English.

At UB, Allen started thinking more about art through the power of storytelling. In 2017, a year before graduating, Allen took photographs to work against some of the racist and historically unfounded perceptions of Black folks in Baltimore, perceptions that she witnessed firsthand in her job as a behavior support assistant. These photos were up close and personal works that showcased the tenderness of Black folks, emphasizing the diversity and vastness of Blackness, including shots of Baltimore’s AFRAM festival, protests, and neighborhood scenes.

“Initially, when I started doing work, it was supposed to be a counter-narrative to Baltimore life,” Allen says. “But I realized that I was still speaking to the white gaze. And so, I was like no, I’m only worried about Black people and the Black gaze.”

Since her teen years, Allen has written fantasy stories about life in Baltimore, and she fell in love with the work of Octavia Butler. “I really like fantasy and sci-fi, but Octavia Butler is my favorite. I love how she inserts Blackness in other worlds,” Allen says. “When I watch a lot of sci-fi and fantasy shows, you don’t see Black people in them. Like, you mean to tell me you are in the middle of space or in a futuristic world and there’s no Black people? But Octavia Butler, she centers Blackness and Black women all the time.”

Pulling from her interest in fantasy, sci-fi, and fiction, Allen’s portraiture work records the timeless gaze and essence of Black folks in Baltimore. “I like to think of the work I do now as a reimagination of what blackness is,” she says. “And I think Octavia Butler is similar in the way that she reimagines Blackness in all of these different types of worlds and capacities.”

This reimagining takes form in “Southern Gothic I and II” (2020), for which Allen photographed musician Elle Cook, well lit in front of a large and intricate creeping tree. Cook’s gaze meets the viewer, luring us to confront the duality of the soft yet melancholy photograph, a contrast commonly expressed in gothic literature. “When I think of southern imagery or down south, I think of these big willow trees and I also think of trees on plantations,” Allen says. “The tree was so big that the branches were bending off of the tree and onto the ground… and the sun was setting, and it was real moody and dark. And that’s what southern gothic is about. It’s brooding but still very beautiful.”

The intimacy that Allen was able to find in Cook’s gaze is not limited to daytime or sunset shots. Though aesthetically and contextually distinctive, that sensation is also palpable in her photographs at Version, the Black LGBTQ-centric dance party that combines the creative excellence of founder and DJ Jessica Hyman (aka Trillnatured), MC Kotic Couture, designer and illustrator Suldano Abdiruhman, and Allen as the party’s official photographer.

Version creates a home for many of us to love, feel safe, and be with folks that we consider to be family, which is vital in a continually shrinking scene. Baltimore’s lack of Black queer- and trans-centered spaces has felt even more omnipresent ever since the Paradox closed in 2015.

Third Saturdays at the Paradox were a place where we could be in community, dance and laugh until the crack of dawn, and walk out onto Russell Street to hear the birds chirping and see the sun dispersing from the clouds. Every month (prior to COVID), Version was a place where we could feel free and listen to the beautiful transitions orchestrated by DJ Trillnatured and the sounds of Kotic Couture’s voice on the mic. Every month, we danced past last call while the lights were still on and the music was still uplifting us, only to be found outside in conversation with one another a few minutes later.

Allen’s photographs of Version give us a profound view of what home looks like. For Allen, “Home means stability, a place where you can build community, a place where you can feel recharged and feel safe.” Using iridescent lights and the party’s energetic nature, Allen takes portraits and action shots of the crowd all dressed in their finery. Her ability to preserve the most intimate moments within that crowd—from the gentle touch of two bodies entrenched in one another to the crowd screaming to the lyrics of a beloved Rico Nasty song—is particularly moving.

Her ability to preserve the most intimate moments within that crowd—from the gentle touch of two bodies entrenched in one another to the crowd screaming to the lyrics of a beloved Rico Nasty song—is particularly moving.

Approaching these soft and loving moments in public spaces, Allen practices a lot of intentionality. She takes a deep breath, taking note not to invade or disrupt the moment at hand before pressing the shutter button. “It’s important to respect people’s intimate moments, but also to capture them because you can’t replicate intimacy, or that level of intimacy, when people’s guards are down,” she says. “But you still have to respect it.”

Whether her photographs are documenting nights at The Crown, friends around Baltimore, or family at home, there is always a level of closeness and familiarity that the images exude. Her aspirations for what her work can give her has changed over the years, “but I guess that now I hope to get a sense of purpose and understanding out of my work,” she says, “because I also use photography to explore the questions that I ask myself a lot and to explore ideas. So I’m hoping that it brings me clarity.”

This feeling of clarity came to her when she created a diptych of her two cousins years after the photographs were taken: she realized that this particular piece is about contemplation, the impact of a family lineage, and passing on teachings to multiple generations. Her oldest cousin, pictured on the left, introduced her to anime, manga, and gaming—early interests that led her to think about fantasy and the power of storytelling and imagination.

Although Allen’s path into photography has not been linear, every step, hurdle, and challenge has informed her practice. From photographing friends on a point-and-shoot camera, to taking a seven-year hiatus, Allen’s work documents life around her hometown of Baltimore as each of her portraits look at the viewer and allow us to have a one-on-one interaction with the purposeful centralized subject. Allen’s photographs of Version are similar in that they depict home in a different sense—the true essence of love and joy that can exist when Black queer and trans folks have safer spaces to breathe and be present in our bodies and in community with one another.

Allen’s work provides us with a framework to think about remaining present while also speculating about the endless possibilities of the future. Her work is especially important right now, where her documentation of Version in a pre-COVID world allows us to remain reminiscent but also hopeful for what is to come.

In a moment where we are told to quarantine for the safety of ourselves and others, images of our loved ones and portraits that look us in the eye and remind us that we are not alone are critical to keep moving forward. “My work is a love letter to my people,” Allen says, a beautiful testament to her journey and ability to express intimacy through her practice. Allen helps us realize one of the more profound aspects of photography: its ability to document home, history, and deep, intimate, and transient moments that cannot be replicated.

Sydney J. Allen’s work is included in the BMA Salon as part of as they lay’s exhibition, and she was recently featured on the Local Color podcast.