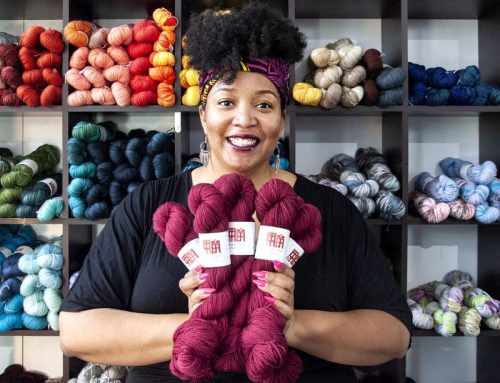 The News: Repeal of LEOBR and More Police Reform, [...] 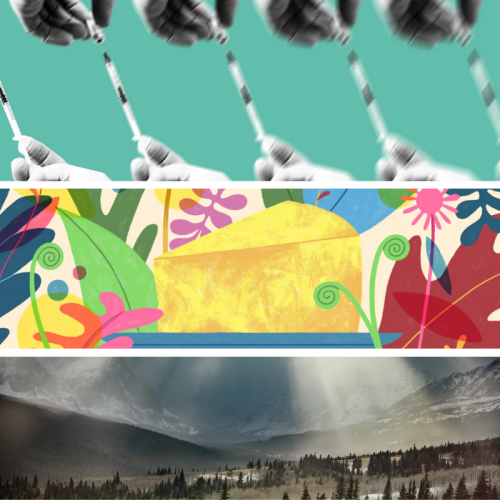 Fashion & Lifestyle , Issue 09: Craft
A Generous Spirit: Roya Golpira & Gutierrez Studios
When Gutierrez died of cancer at the age of 45 in 2010, he left behind a business built on hard work and craftsmanship, and a community of artists and friends who valued his passion and warmth. 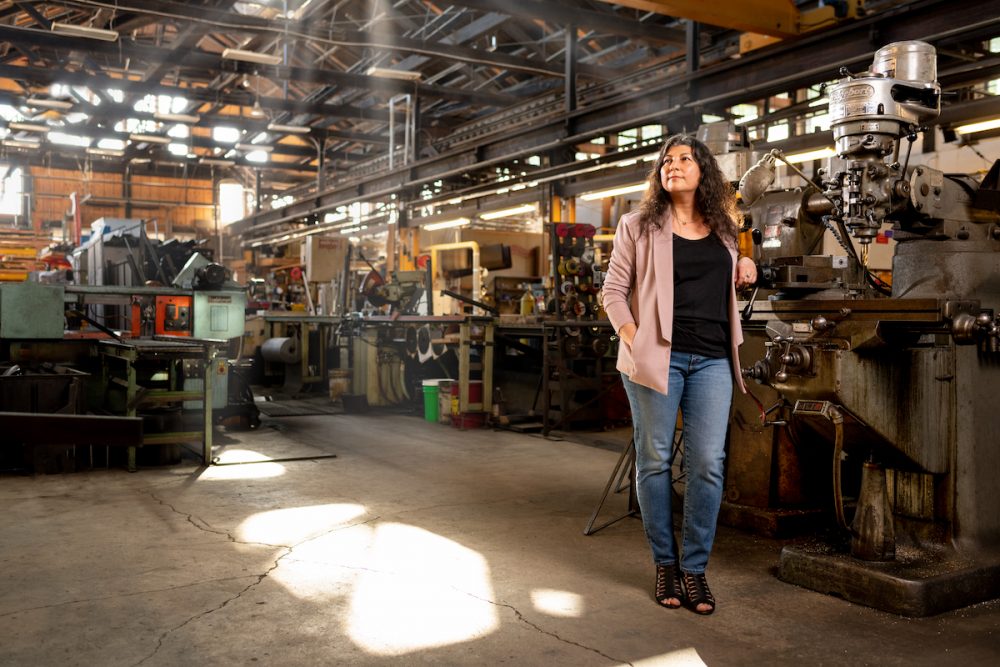 John Gutierrez and David Miller were installing a custom railing for a three-story staircase when they realized the bronze handrail—the very final piece they had to put in place—was an eighth-inch too short. “Get rid of it. We’re doing it again,” Miller remembers Gutierrez saying.

It was 1995 and they were at the American Visionary Art Museum. The steel balustrade railing, with S-shaped steel pickets that they bent on-site, was the first big metalworking project assigned to Gutierrez Studios, the company he founded four years prior. He wanted to get it right. “It was that intense commitment to quality that I think earned this company everything that it has,” Miller says.

When Gutierrez died of cancer at the age of 45 in 2010, he left behind a business built on hard work and craftsmanship, and a community of artists and friends who valued his passion and warmth.

“He had an immensely generous spirit about whatever it was—to tell you the truth, to let you into his world, to make you feel like you were the most important thing. Those are the things that he’s left behind,” says Roya Golpira, his long-time partner. She now heads Gutierrez Studios and says of the decision to continue after his death that, “It wasn’t a choice for me. I loved this place and I loved what we had created.”

Gutierrez and Golpira were high school sweethearts. When he was accepted to Rochester Institute of Technology to study furniture design, she moved with him to upstate New York. When Gutierrez Studios moved to Clipper Mill in October 2004 and Clipper Park Road was torn up from construction, Golpira helped unload trucks on Parkdale Avenue. “It was his vision, but I was there all along. I had the privilege of being there from the beginning,” she says.

Gutierrez Studios began in 1991 as a furniture design and fabrication company. At the time, it was a one-man operation. Gutierrez would make custom pieces for clients, and Golpira, who is a MICA graduate and trained as an artist and jeweler, would assist as needed. Gutierrez had greater plans though. “He wasn’t the independent artist that was just going to stay in his studio by himself,” Golpira says. He “felt that it was bigger than him, and always wanted to take on these bigger challenges.”

Those challenges included installing the AVAM staircase (designed by David Hess) and hiring additional fabricators and installers to assist with a growing number of projects. In 2004, Clipper Mill was undergoing redevelopment when Bill Struever (of the development company Struever Bros. Eccles & Rouse) invited Gutierrez to move into a building that once functioned as an industrial foundry. The new workspace was massive—20,000 square feet, give or take—and more than double the size of their previous space in Remington. He jumped at the chance.

“He was that quintessential artist where it was about problem-solving. So it didn’t matter if we had never done it before, he was like, ‘We’ll figure it out,’” says Golpira. He was confident that his business would grow into the new space.

“John was a visionary,” Miller says. “He didn’t care about quarterly quotas or that kind of crap. He wanted to know where we would be in ten years. How do we move this company so that in ten years we’re a force to be reckoned with?”

You can’t come into this space without feeling him and knowing him.

As the company continues to grow, Golpira is comforted that her team holds true to her late partner’s values of hard work and high standards. Gutierrez Studios now employs 24 metalworkers, woodworkers, designers, estimators, installers, finishers, as well as administrative and management staff, all of whom work full-time with benefits. “Roya has put into place all the things that John wanted to have for his employees,” says Miller. “She wants to make sure they’re all cared for.”

After her partner’s death, Golpira says, “It was really hard for me. But I had the strength of the people around me that were dedicated to this place.” She says of her current team, “They’re continuing in the work that [John] started and growing it in ways that maybe he wouldn’t have even if he were here, but I know he would be extremely happy that it’s continued.”

Gutierrez Studios is still located in the old foundry building in Clipper Mill, right behind Woodberry Kitchen. A showroom in the front exhibits designed products such as stools, chairs, and lamps. On the second floor, an industrial trestle conference table provides a space for clients to meet with designers and was constructed using reclaimed beams from Clipper Mill’s Assembly Building, made of heart pine. An open office houses desks for staff, and windows overlook the workshop below. The space resembles an airport hangar packed with metalworking and woodworking equipment—welders and cold saws and drill presses and sanders—and is evidence of Gutierrez’s sweat and vision all these years later. “You can’t come into this space without feeling him and knowing him,” Golpira says.

It was important to Gutierrez that he set up his business in Baltimore since he and Golpira grew up nearby in Towson. “He could have gone anywhere. We tossed around New York. But Baltimore’s been our home, and I think it’s a really dynamic city, personally, and I’ve found that it’s very open and welcoming to creative people. I can’t imagine being anywhere else, honestly,” she says.

The company is known for producing custom industrial modern staircases and handrails, though they design and fabricate everything from awnings to tables to stools to exterior furnishings and sculptures. If you look closely, you start to see their handiwork all over the city. The curved plaza benches at Coppin State University. The blackened aluminum plate blade sign for the makerspace Open Works. The Druid Hill Park colonnade made of repurposed cast steel columns. The staircase, light fixtures, and steel and glass storefront at Woodberry Kitchen. The steel and wood sign announcing “Baltimore” along the tracks at Penn Station. Some projects were designed and built in-house from start to finish. Others involved collaborators such as Gennady Schwartz, who managed the Druid Hill Park colonnade project with the Department of Recreation and Parks; landscape architects Hord Coplan Macht; and Studio William Cochran, which designed the project’s art glass features.

Most of the work combines both metal and wood elements, evidence of Gutierrez’s first love of woodworking alongside his ambitions to learn steel and other metals. The marriage of the two materials provides a modern look that still prioritizes warmth and functionality. “There was an inherent connection between the design of something and really understanding its properties as a material because he was a maker,” says Golpira.

After Gutierrez’s death, the community was devastated. “When someone of John’s presence is lost, I believe there is this need to do something,” says Golpira. The Gutierrez Memorial Fund emerged out of that need to create something in his honor. What began as a walk to fund a community firepit—finishing a project Gutierrez himself started years prior—organically morphed into a nonprofit to support Maryland artists. Now in its tenth year, the organization has raised over $200,000 and funded twelve projects, most of which are permanent installations in Baltimore City. Golpira says their mission is to fund projects that build skills, engage the community, and transform the built environment—all values that Gutierrez held close.

“Everything that he did was going to be honoring the craftsman and artist,” says Golpira. “He always said to me, ‘Artists shouldn’t be on the edge of town… We’re primary to society. We should be in the center of town.’” Gutierrez’s impact on the city is evident in the work he designed and built with his own two hands, in the projects that the Gutierrez Memorial Fund has supported after his death, and in the business he chose to set up in Baltimore, his home. Miller, who helped him install the handrailing all those years ago, says, “That was his passion, to make things that will last forever.”