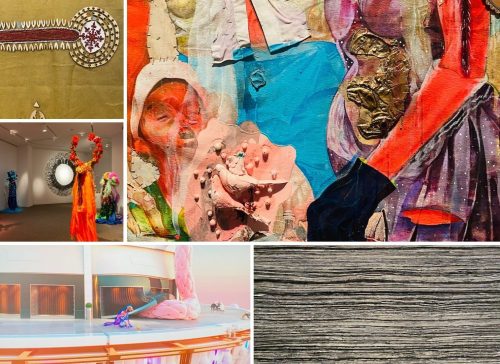 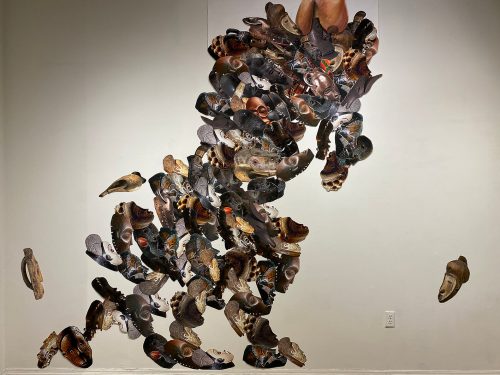 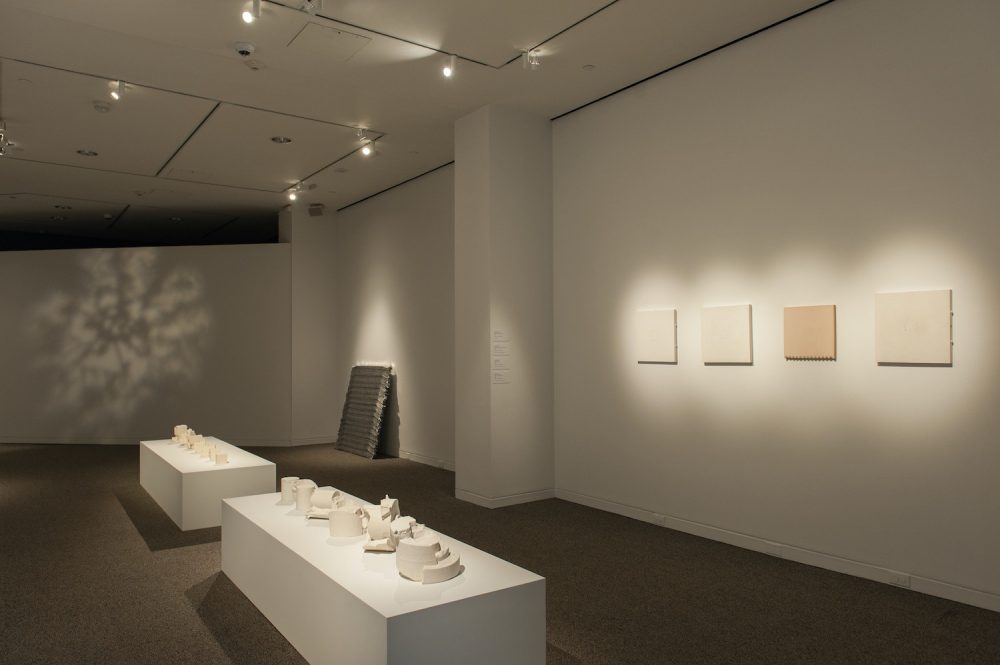 Hae Won Sohn’s “/skwer/ I” is one of the first sights that catches the eye when entering the Janet and Walter Sondheim Artscape Prize Finalists exhibition from the Walters Art Museum’s lobby. The aluminum-foil-and-metal-hardware artwork leans against a far wall like an aloof attendee at a posh party; from a distance, “/skwer/ I” has the shiny, silvery sheen of a beaded flapper dress. As you get closer, that detached glamour sublimates into a more obdurate presence. That glossy brilliance is due to spotlights hitting lengths of aluminum foil folded into long, thin strips that are stacked one atop the other. It only takes up a small portion of the wall it leans against, but it has the imposing presence of a flyweight boxer whose hands you don’t want to catch. And it doesn’t look like something familiar, but it also doesn’t not look familiar. What, exactly, is this thing?

I’m using the blunt-object noun “thing” here to tap into the word’s fugitive meanings and Kantian philosophical fussiness. The fact is I have no idea what, precisely, to call “/skwer/ I”—sculpture? 2D object? Metalwork?—and this low-key inscrutability is what makes Sohn’s Sondheim exhibition such a thematically rich and visually captivating snapshot of an artist exploring the untraveled rapids created by the creative flood of her own ideas. The Baltimore-based Korean artist was trained in traditional-to-contemporary Korean ceramics techniques as an undergrad in Seoul and continued her studies of craft at graduate school at Cranbrook, where she also began experimenting with materials and processes.

The artist describes the evolution of her own practice best in a Baltimore Clayworks artist lecture in March (watch on YouTube), and in interviews, where she talks about how her experimentation introduces moments when she has to improvise along the way. Sohn uses commercial ceramics techniques, such as slip casting, which are overwhelmingly used to create uniform multiple objects, and experiments with the process at various stages—such as breaking the molds and reassembling them—to create unique objects that can’t be mass reproduced.

If you’re any kind of gearhead and into nerding out about how things are made, proceed directly to her artist lecture because there’s a wealth of meta-artworld commentary to be had in thinking about and through Sohn’s artistic practice—craft vs. fine art; design vs. craft vs. sculpture; form vs. function; pragmatic molds as visual/thematic voids, etc. I’m more curious about where this creative journey is taking Sohn and what she plans to say with it, because right now she’s exploring fascinating ways to capture time’s ineffable disquiet.

There’s something thrillingly lost-in-time-and-space about Sohn’s work right now. Time itself is notoriously difficult to evoke in artworks that aren’t, well, time-based in some way: performance and theater, music, film/video, etc. The relentless indifference of time—the simple fact of its passing, the incomprehensibility of its cosmic scale—can intellectually feel impossible to pull off without having two distinct points to compare or contrast. Sohn’s artworks cagily evoke time’s unknowability through intimacy, and this discombobulating combination forces the brain to think about them in wonderfully irrational ways. She’s creepily forcing us to ask not only “What is this?” but the much more unnervingly delicious, “When is this?”

Take, for instance, “Square Dreams,” which at first glance looks like an explainer installation for an archeology exhibit: there’s what looks like a cement cylinder and four other kinda/sorta cement cylinders that are at various stages of being freed from the morass of masses encasing them. That vibe is echoed “Hiatus,” where the resulting square form feels to have withstood a similar irregular excavating process. Even “/skwer/ I,” that pretty aluminum pugilist of a piece leaning against the wall, feels recklessly impractical, an artifact from the distant past or future because I certainly don’t know what to make of it.

This speculative impression I’m describing shouldn’t be confused with the artist’s intent, as Sohn’s discussions of her creative practice explore intellectual and thematic ideas as much as they do technical ones. I’m trying to convey a skosh of the sophistication she’s achieving with this vocabulary, since so much of her impact comes from subtle, elemental details.

She works with materials (porcelain, plaster, cement) that humans have been working with for a long time, and works with forms (cylinders, squares) that are specific in visual appearance but nebulous in meaning. Given a basic understanding of her labor-intensive practice—”make object, make mold, break bold, make a new mold from broken mold pieces, repeat”—the eye assumes it understands how she arrives at the artworks we see in galleries, but they don’t seem to follow an intuitive logic. This is similar to my experience, as a kid, studying animals and the theory of evolution and looking at illustrations of anatomical systems that show how birds and reptiles all over the world and through history share this and that characteristic and so on, and then getting to Australia and thinking, “How in the what is a platypus?”

In Sohn’s vocabulary, everything is a platypus, and it’s pointing her into exciting terrain. For whatever reason, music is what comes strongest to my mind when looking at Sohn’s Sondheim exhibition, specifically the early works of John Cage as he started experimenting with the I Ching in his composing and the mid-1970s output of Brian Eno as he started exploring his Oblique Strategies: She’s unlocking a part of her creative super-powers and discovering ways to create kinda genreless pieces that vibrate with a volatile intensity.

Just as in fictional worlds where galaxies long, long ago and far, far away can share visual similarities to the apocalyptic nuclear winters of the imagination, or the way Blade Runner’s dystopian vision of the future gets mapped back onto some aspect of the urban present every few years since the mid-1980s, sometimes what we see looks the same no matter if we looking over a great distance backward or forward. And when we can’t tell in what direction we’re looking, it means we don’t know where we are. Sohn is subtly tapping into that ontological unease—and it’s going to be exciting to watch where her practice experimentation takes her, because you get the impression that she’s barely scratched her idea well’s surface.

Photos courtesy of the Walters Art Museum and by Cara Ober