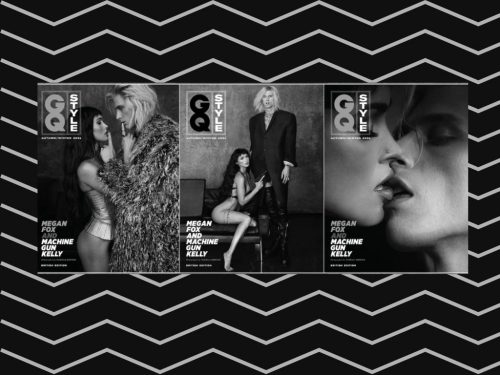 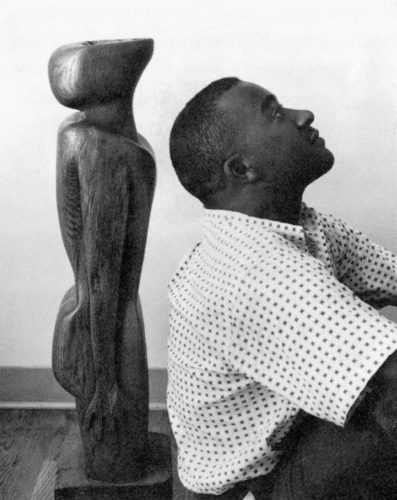 This week: A selection of contemporary and historic abstraction, as well as utterly arresting photos, in Baltimore galleries and one museum. Three succinct reviews featuring Bill Schmidt and Jan Razauskas’ Spatial Fabrications at MONO Practice, Color and Illusion: The Still Lifes of Juan Gris at the BMA, and Rania Matar’s She at C. Grimaldis Gallery.

Spatial Fabrications: Bill Schmidt and Jan Razauskas at MONO Practice
Through October 23, 2021
Hours: Thursday and Saturday, 1-4 p.m., or by appointment

There’s an undeniable sense of satisfaction a viewer feels upon seeing work by artists who have mastered a particular medium or craft with fluency. And here at MONO Practice’s Spatial Fabrications, Jan Razauskas and Bill Schmidt bring respective decades worth of experience and experimentation to painting, playing with layers of washy transparency and precise hard edges to great, tense effect. Both abstract painters manage to capture an interior luminosity like oil painting’s old masters—although Razauskas achieves this by layering acrylic on smooth aluminum panels and Schmidt works in gouache, which he describes as “a recalcitrant medium.”

Perhaps it’s this sense of light and figure/ground interplay that suggests a backlit screen, but I can’t help associating both artists’ bodies of work with animation or computer-generated imagery. Razauskas’s sherbert and earth-tone, almost geologic compositions could be sci-fi landscapes plucked from the background cels of ‘70s classics like Fantastic Planet or a trippy Saturday morning cartoon from the golden age of Filmation Studios. But here there’s a grown-up interplay of finely-tuned color combinations that cause these works to vibrate in place, with hard-edged crystalline foreground forms acting as cages to keep some gaseous phenomena from surging forward and escaping.

Read left to right, Spatial Fabrications is hung in four distinct but interrelated clusters of small works, two by each artist, not unlike the pacing/tone shifts of a symphony. Schmidt’s similarly-sized panels hit almost all the same formal notes as Razauskas but manage to present two very different “movements” to complete the show. If we’re to keep that music analogy going, the third group of paintings appropriately functions as the exhibition’s scherzo—slightly humorous and up-tempo, with asymmetrical, janky grids overlaid atop fields of marbleized acerbic colors. They have a calculated awkwardness that’s endearing. They skirt kitsch but feel too finely and lovingly crafted to be kitsch—picture a tiki bar designed by Wes Anderson, and it’s easy to imagine these hanging comfortably above a booth.

And then there are Schmidt’s paintings that snap back to orthogonal grids, at times layered and rotated at jarring angles, like a shower wall patched with the wrong tiles, off-kilter. Something about the flat-but-pixelated application of paint and seemingly arbitrary geometries reminds me of early CGI environments—an Angelfire webpage’s wallpaper repeating awkwardly, or a video game landscape from a low-res first-person shooter. Or maybe some could be a piece of viral digital art, closely but not quite mimicking a dot-com era corporate aesthetic with the intent to infiltrate and subvert.

Ironically, it’s these conflicting associations with screen environments—from cartoons to Windows95 desktops—that make the strongest case for viewing these artworks in real life. After a year of mostly experiencing paintings as digital photographs presented on screens, it’s exhilarating to see good painting in the flesh.

Photography really can’t do justice to the electric quality of optical color mixing that happens when a skilled painter puts a transparent orange wash over a field of translucent blue paint. The illusion of backlit glow these colorists create with analog media could never be replicated in a socially distanced “online viewing room,” and certainly not one as lovely as MONO Practice’s brick-and-mortar digs.

Color and Illusion: The Still Lifes of Juan Gris at The Baltimore Museum of Art
Through January 9, 2022
Hours: Wednesday – Sunday, 10 a.m.-5 p.m., free with a reservation

Confession: I think Cubism is the most overrated of early 20th-century painting movements—the heady, dowdy, beige-and-grey stepping stone necessary for Duchamp to invent conceptual art 50 years too early and for Picasso to make an art historical name for himself so he could get back to making pretty paintings. But within an overrated genre there lies an underrated artist: the surprisingly colorful and contemporary-feeling Juan Gris.

The BMA’s recently opened retrospective—the artist’s first in the United States since the 1980s—presents a compelling argument that this painter deserves more than a footnote in art history textbooks. His play with texture, Tromp l’œil, collage, and what must’ve been anachronistically vibrant color relations feel unexpectedly of the 21st century—one could slide some of his faux-woodgrain and wallpaper mixed-media works into Mickalene Thomas’s installation at the same museum and they wouldn’t look out of place. There are a handful of canvases here that one could encounter at a hipstery open studio in Bushwick or art fair like NADA and be totally convinced they had been painted within the last decade. I’m not sure if that’s a sad commentary on contemporary painting’s much-bemoaned real or imagined stagnation or Gris’s prescience, but I’m willing to go with the latter.

The 40+ works in the exhibition are hung chronologically in a clockwise orientation. The earliest are Gris’s still lives as a recent arrival from Spain celebrating Parisian cafe culture, including his rarely displayed 1917 Still Life: The Table—a fragile collage not seen publicly since the 1970s, but considered so seminal that the New York Times has created an interactive digital deep dive to preserve the work for posterity, which visitors can explore and zoom into on a tablet in the gallery. Like many of Gris’s prewar still lifes, it depicts a tabletop at a cafe, littered with wine bottles, faux-finishing techniques, and collaged paper. Fittingly, one of the newspaper headlines reads “The Real The Fake.”

Gris’s work took a darker turn as the first World War broke out, which was especially challenging for his career—he had signed an exclusive contract with a German gallerist in Paris, who was exiled as an enemy of the state. Despite this absurd circumstance, Gris still couldn’t show with other galleries, so his productivity and mood slipped until the war ended. However his postwar works are a joy of interesting color combinations, texture, and pattern. The last pieces in the show were painted just before the artist’s death in 1927.

The BMA is fortunate enough to own two rare canvases by Gris, whose few works are mostly scattered in private collections. Co-curators Katy Rothkopf, the BMA’s Senior Curator of European Painting and Sculpture, and Nicole R. Myers, senior curator of European Art at the Dallas Museum of Art, have done a remarkable job of wrangling more than 40 scattered works into a cohesive and impressive exhibition.

The Lebanese-American photographer Rania Matar takes oddly haunting pictures of women, in both the United States and Middle East, that I hesitate to call “portraits.” I’m not sure if that’s a statement that makes any sense, but circling around the gorgeous exhibition She for the second time, I had a disturbing (and maybe problematic?) thought. On any given day, contemporary humans are bombarded with more photographic images than a person a little over a century ago likely would’ve seen in their entire lifetime. And almost everywhere outside of the most conservative corners of the Islamic world—thanks to some combination of social media feed algorithms favoring flesh tones and selfies and advertising from car insurance billboards to porn pop-up ads—the vast majority of those images are of women’s bodies. So it’s actually quite rare and pleasantly surprising these days to see photographs of women that feel really, truly idiosyncratic and utterly arresting.

Matar has managed to assemble a tight but diverse, powerful collection of roughly a dozen images that feel unconventional and fresh while eliciting a range of associations. These are the rare photographic portraits that draw me in and demand time and attention. I’m not tempted to “scroll by” as face-image oversaturation has conditioned so many of us to do—I find myself curious about each of Mattar’s sitters, their contexts, and internal worlds. There are multiple layers of tension in these works—between the formal qualities of the photographer’s compositions and the individual identities of Matar’s sitters, for example. Or the contradictory impressions that each image is meticulously constructed or staged yet somehow bears the energy and vocabulary of a candid snapshot full of happy coincidences.

The strongest pieces, both formally and conceptually, are those that play with the geometry of the human silhouette and its mutability through styling. In Alae, Ramlet Al-Bayda, Beirut, Lebanon, 2020 a chador or abaya billows back into near-perfect right isosceles triangle behind a lone woman on a beach, her face turned three-quarters toward the camera, an inscrutable mask of stoicism. She is Ingmar Bergman’s “Death” in black, stark against the Listerine-colored waters of the Mediterranean. It’s a captivating and evocative image, suggesting just enough hints of narrative to keep the viewer engaged beyond the initial dynamism of the composition.

It’s also one of several portraits that might allude to cultural displacement within the Middle East. In Wafaa and Sanaa, Bourj El-Barajneh Refugee Camp, Beirut, Lebanon, 2017 two women lean against one another, both completely covered by brightly patterned fabric, their faces obscured. It’s a composition that evokes La Pieta, and points to a recurring suggestion in She—that perhaps femininity is defined by conflicting desires for visibility and camouflage.

That’s an impression underlined by my favorite photo in the show and its rare humor. Ciearra (In the Coneflowers), Winston-Salem, North Carolina, 2018 foregrounds a field of hot pink wildflowers. And just behind them is the back of Ciearra’s head, her hair dyed the exact unlikely shade of pink—a vibrantly anonymous blob that blends in with the flowers, but also serves as a visual analog for the silhouette of a hijab.