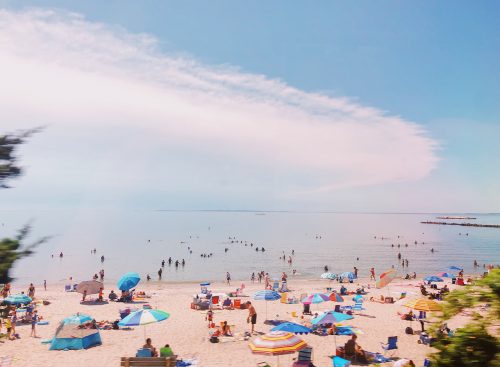 A Photographer’s Views from the Train 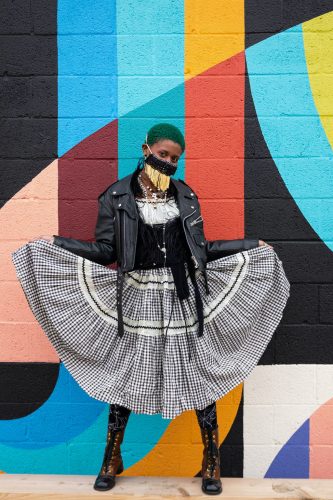 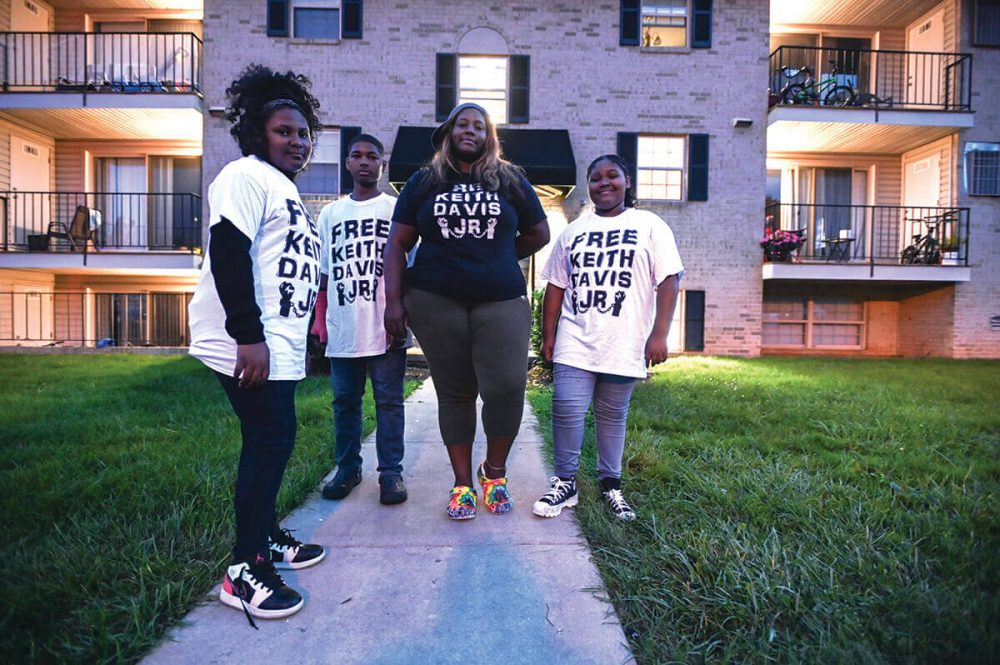 The Many Trials of Keith Davis Jr.
by Ron Cassie
Published November 17 in Baltimore Magazine

Excerpt: Taking cover inside a cramped, dark auto repair garage, Keith Davis Jr., in what he believed were the last moments of his life, somehow, desperately, got his girlfriend on his cellphone as four Baltimore police officers tried to kill him. Bullets ripped into tool cabinets, steel beams, the shop’s office and bathroom doors, the concrete wall at the back of the building, and the refrigerator that Davis had ducked behind. More than 30 shell casings from .40 caliber, Glock 22 service weapons lay scattered across the alley in front of the shop and its garage floor.

“I was trying to focus on Keith’s words and kept hearing ‘pop-pop-pop,’” recalls Kelly Davis, then Kelly Holsey. “It sounded like a popcorn machine. Keith sounded terrible. I heard fear. He was talking to me and, I later realized, to the police officers shooting at him at the same time. Keith is tough as nails, he’s been through a lot, and he was crying.

“The noise and sirens didn’t register until afterward,” she continues. “Then, there was one loud ‘POP’ and the call went dead. There was that rustling sound, like when someone drops their phone. I kept calling back, texting, calling back. Now, I was scared and freaking out.” […]

By noon, Kelly was at Sinai Hospital trying to find out if her boyfriend was alive. She was told he was in critical condition following intense surgery. She was also told she couldn’t see him and police were in his room. Why, Kelly had no idea. “Then I walked into the waiting room and looked at the TV, and saw [BPD Deputy Commissioner] Jerry Rodriguez on WJZ, on the 12-clock news,” Kelly recalls. “He was saying police had shot a man earlier that morning who had robbed a hack driver and shot at police officers during a standoff.” A Sinai admissions staffer gestured toward the television and told her the man they were talking about was her boyfriend. Six days later, Keith Davis Jr. was charged with armed robbery and multiple counts of firing a weapon at law enforcement officers. “None of it made any sense. I’d woken up into a nightmare.”

Excerpt: On Nov. 2, Maryland Gov. Larry Hogan made a stop in Baltimore’s Waverly neighborhood to discuss a $1.3 million dollar investment in area businesses through the Maryland Strong Economic Recovery Initiative (SERI), which was designed to help local businesses cope with the financial impact of the pandemic.

Hours after Hogan’s visit, which included stops to Pete’s Grille, Peabody Heights Brewery, and Urban Reads Bookstore, the workers and owners were shocked to see that they’d been unknowingly conscripted into Hogan’s copaganda campaign. The term-limited governor with aspirations of holding national office used photos of him visiting these small businesses to suggest they supported his reactionary “refund the police” initiative.

“We never had a discussion with anything about ‘refund the police,’” Tia Hamilton, owner of Urban Reads, said of Hogan’s visit to her Greenmount Ave. bookstore and community space.

Hamilton, who also publishes State vs. Us magazine and is a vocal prison reformer and abolitionist, said Hogan’s visit lasted less than 10 minutes. But soon that casual visit became part of Hogan’s “refund the police” campaign thanks to a press release and Facebook post by the governor.

His action constitutes a failure to meaningfully respond to the calls to abolish hyper-criminalization in policing, reimagine public safety in our society and address the crisis of accidental fatal drug overdoses in Maryland.

Because of the veto, in Maryland, the tools which may be used to consume drugs will continue to be illegal to possess and use. This makes them scarcer and encourages people to share them with others, putting them at an elevated risk of contracting bloodborne illnesses and disease such as hepatitis and HIV.

Criminalization of paraphernalia is dangerous for all Marylanders, including those who do not use illicit substances, because it increases the likelihood that the public at large and law enforcement personnel can be directly harmed. Under continued paraphernalia criminalization, people who use drugs will continue to be reluctant to hold onto their supplies due to the fear that the police will use possession of these items as a means to search and arrest them.

The metaverse is a distraction
by Yair Flicker
Published November 17 in Technical.ly Baltimore

Excerpt: The idea of a metaverse is not new.

Its dystopian origins discarded (see Snow Crash, The Matrix, Ready Player One, etc), Mark Zuckerberg is now pitching us a vision of an “always on” / “always connected” life, augmented by technology. Facebook (now Meta) is not the only internet giant aiming at this particular flavor of world domination; the Big Five are all racing to get ahead of each other just as they have in the past with any number of new tech trends like the Internet of Things, live streaming video, personal assistants, messaging, and more.

On the one hand, if this is just another in a long string of battlegrounds for the tech titans, does it really matter? Maybe not. But the timing and tenor of this move in particular are a strong signal that something is amiss—and has been for a long time.

While our centralized government struggles to understand and regulate Big Tech, there are lessons we can learn and steps that we can take both in Baltimore and more broadly across Maryland to shift the balance of power back toward our citizens.

Excerpt: The Baltimore Police Department continues to make most of its car stops in the city’s poor, Black neighborhoods.

Battleground Baltimore previously reported that the majority Black and heavily-divested Ninth District in West Baltimore endured the most traffic stops during June 2021 (516 stops) and July 2021 (557 stops).

That pattern persists. In August, there were 477 stops in Ninth District; in September, 356 stops, and in October, 386 stops.

These numbers were all made available thanks to Third District Councilperson Ryan Dorsey, who began requesting the car stop data over the summer and has continued sharing that data with Battleground Baltimore.

For Dorsey, the fact that the past five months of data show the highest number of stops in majority-Black parts of the city like the Ninth District make the “implicit bias” of BPD pretty, well, explicit.

Excerpt: Former Baltimore mayor Stephanie Rawlings-Blake has a new gig as the spokesperson for rapper Travis Scott, whose Astroworld Festival concert in Houston last Friday was the scene of a crowd surge that killed nine people and that officials declared a “mass casualty” incident.

Appearing on the “CBS Mornings” show Friday, Rawlings-Blake said it was “ludicrous” to believe that Scott could have stopped the concert. Only the executive producer and concert producer had the authority to stop the concert under the 59-page operations plan, she said.

Rawlings-Blake said the tragedy was the result of “so much chaos, so much breakdown in the communication,” and that Scott “had no idea what was going on until well later, hours and hours later.”

Excerpt: Recent revelations should cause the board of directors of Baltimore’s Downtown Management Authority (DMA) to take a hard look at the conduct of Downtown Partnership of Baltimore, the private entity that administers the DMA, a public body established by city law.

The conduct was not unlawful but failed the smell test in a city where the odor of divided loyalties and self-dealing already has diminished public trust in government to an extraordinary degree.

No hard look by the DMA directors is likely, however, for reasons described below, including the little known fact that Mark Wasserman, an aide and architect of former Mayor William Donald Schaefer’s “shadow government,” serves as chair of both entities.

Before getting into the absence of an arms-length relationship between the DMA and the Partnership, here’s a quick review of the problematic conduct:

The Partnership (DPOB) angered many downtown residents with its aggressive promotion of a City Council bill that allows video billboards in a new special signage district in the central business district, a neighborhood becoming increasingly residential.

As the bill sped through the legislative process, a profit-sharing agreement between DPOB and unnamed media companies that install video billboards came to light.

Excerpt: Poinsetta McKnight stepped out her front door with a broom, shovel and 30-gallon trash bag and went to work sweeping the street.

“People will throw glass, nails — they don’t care,” she said as she swept.

She’s been doing this most mornings for decades, keeping the 1900 block of Etting Street in Baltimore clean.

“One time the inspector, when he came through about three or four years ago, he said, ‘You could eat off the ground in here,’” she said. “He said, ‘It’s just that nice.’”

McKnight — or Ms. Poinsetta, as everyone around here calls her — is retired from the U.S. Customs Service. She’s 78 and grew up in the brightly painted red brick row house she now owns, on what was once a block full of life.

“People put flowerpots out on the street, with flowers and everything, and they’d paint the steps,” she recalled. “It was really nice.”

Blueprint Accountability Board Met For the First Time, But Lacks Funding to Start Work
by Elizabeth Shwe
Published November 16 in Maryland Matters

Excerpt: The board charged with overseeing the implementation of the Blueprint for Maryland’s Future decade-long education reform plan met virtually for the first time on Monday, but is hindered from fully operating due to a lack of funding.

The AIB is responsible for ensuring that the state and local jurisdictions fully implement the multi-billion-dollar Blueprint education reforms, which aim to close student achievement gaps and transform Maryland’s education system over the next decade. It was formally created last month, after the nomination process was mired with concerns over the lack of geographical and demographical representation of its members.

“So much is going to fall to this particular body to ensure that the good ideas that the General Assembly has passed, the funding, etc. is faithfully and rigorously implemented,” said William “Brit” Kirwan, an AIB board member and chair of the Commission on Innovation and Excellence in Education, whose policy recommendations make up the foundation of the Blueprint for Maryland’s Future.

“If that happens, what a difference it’s going to make for our state.”

State Board of Education to re-evaluate masking mandate
by Sarah Y. Kim
Published November 17 in WYPR

Excerpt: Maryland’s State Board of Education heard from parents across the state Tuesday on whether to continue the statewide masking mandate for public schools.

Kristen Caminiti, a mother of four in Anne Arundel County, said masking protected her sixth grader when he was exposed to a classmate with COVID. Her son is also vaccinated.

“Now is not the time to change our protocols around masks,” Caminiti said. “While many people continue to resist vaccination — the only way out of this pandemic — it is not time to relax our efforts to mitigate the spread of this disease.”

Jared DeCoste, a father of two, said there are at least four COVID-19 cases in his first grader’s classroom, and that an additional 10 to 12 students have had to quarantine for nearly two weeks.

“If we unmask students during heightened rates of transmission, this will become more common, severely disrupting learning for these students,” DeCoste said.

Others called the mandate an “abuse of power” by the state board, and argued that the decision should be left to local school boards.

Header image: Kelly Davis and three of her four kids outside their home. Photography by J.M. Giordano