Visual Art
Hidden Labor: Area 405’s Final Shows
The last shows at Area 405 pay tribute to the nearly 20 years of work that went into the artist-run venue and studio building 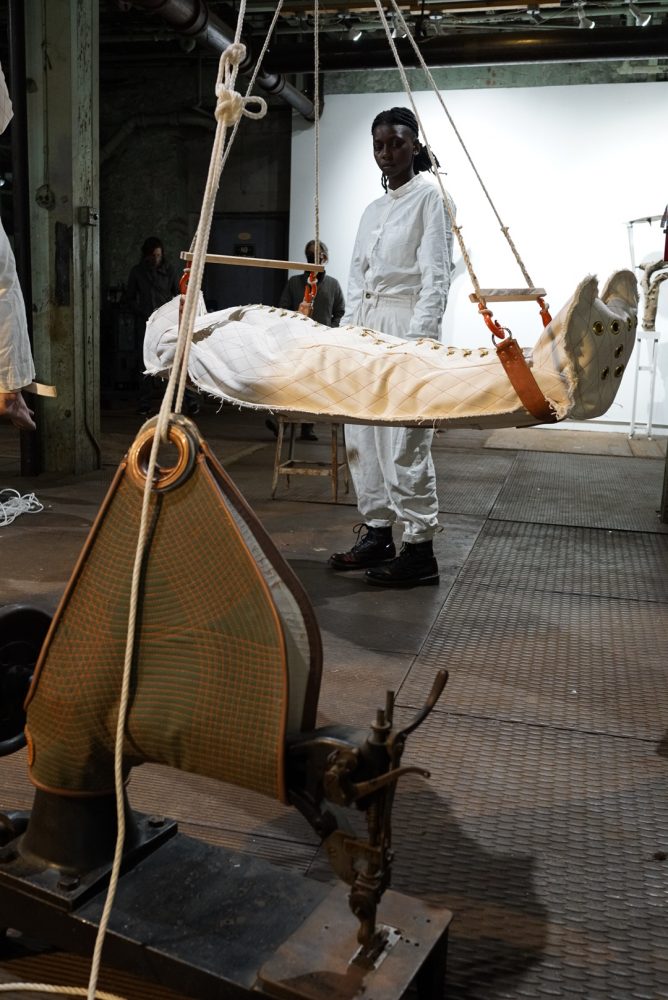 For about 45 minutes last Saturday evening, I sat on the floor of what once, about a century ago, was a factory, watching a group of people labor together over a shared, enigmatic task.

In David Page’s performance One hundred years without progress, four people in all-white attire methodically lugged four other blindfolded, bound, and costumed actors into Area 405’s gallery, one by one, setting them on the floor like hunks of meat. The workers were focused and goal-oriented, but not at all robotic, as they carefully rigged each individual into a complicated system of pulleys and weights, with ropes and knots and O-rings and hooks, before hoisting them into the air. Periodically, they noticed an issue and made adjustments, letting someone down and fixing their straps and slings to allow for better respiration or bloodflow, untying and retying a knot, or tidying an excess of rope.

Except for occasional cranking and clanging, the production was basically silent, the workers communicating mostly through body language, finger snaps, and whispers. The performance, created and orchestrated by Page, who was also one of the bodies costumed and lifted into the pulley system, was a tribute to the oft-hidden but critical choreography of the laborers who produce all the mundane items we depend on.

This was the second of a three-part exhibition, entitled A.Wake, marking the last program at Area 405 in its current form before the building changes ownership. Co-curated by Stewart Watson (artist, curator, and longtime co-owner of the building) and Nancy Blackwell, who has managed the Area 405 gallery since Watson moved to England in 2019, the exhibition series has a religious and funereal structure. A.Wake honors Area 405’s “nearly 20 years of growth, change, community, creativity, love, and labor and 180 years of industry and innovation reflected in this space,” according to an event description.

The first part of A.Wake, the “Invocation,” on November 6 was an opening for Jordan Tierney’s exhibition of assemblage sculptures, elegant combinations of found, natural, and human-made objects that reference “environmental detritus and the human effects of climate change.” Tierney affixes these found light bulbs, brown glass medicine jars, enamel pots, wheels, twine, and furniture parts to each other and to driftwood and dropped tree limbs, creating new, totemic shapes reminding us of the overwhelming amount of waste left behind in mass-production and their potential for creative labor.

Page’s performance/installation was A.Wake’s “Benediction” and it was influenced by the textile industry’s history and the way the Industrial Revolution generally led to the dehumanization, exploitation, and enslavement of humans in the service of capital. The final part, the “Eulogy,” takes place this Thursday, December 16. The gallery will be open from 3 to 9 p.m., and from 6 to 7 p.m. the “order of service” will consist of a short documentary film about Area 405, a ritual by the Rev. Jé Exodus Hooper, and the creation of “a final work” in the gallery.

As of this writing, we don’t know the fate of the legendary art space, studio building, and residence after it went on the market this summer.

There was a ghastly shock to Page’s performance, seeing those anonymized bodies hanging like objects. I imagined their limbs going pins-and-needles numb while stuck in their position. Along with that visceral response, the elements of heft, coordination, and materialism within the performance were deeply affecting for me, especially at this point in current history, in concert with both a rise in labor organizing and pushback by the bosses (with many laws written in favor of the bosses). For example, we entered this weekend with fresh news that the cereal brand Kellogg’s will hire scab workers to replace the 1,400 unionized workers who went on strike in October demanding better pay in consideration of their 80-hour workweeks. (Workers and labor advocates are asking consumers to boycott Kellogg’s products.) Locally, unionization efforts continue at the Walters Art Museum, Baltimore Museum of Art, and MICA—where staff and full-time faculty are organizing their unions, and where already-unionized adjuncts are trying to negotiate a better contract.

It feels strange to admit that a work of art that’s about work—what a dull description—could hit me so emotionally and somatically, but all of life is essentially defined and delineated by work under capitalism. Work dictates how much time and energy we can devote to anything or anyone else in our lives—you might carry baggage from childhood because either your parent was always working, or your parent could never find (enough) work.

The performance also resonated as it took place in a warehouse space that has been a continuous site of labor since its initial 1848 construction as a brewery. When Area 405 was purchased in 2002, renovated, and reopened in 2003, it was not only a living space for the co-owners but also a venue for art and community events and an affordable studio building for Baltimore artists—including, full disclosure, BmoreArt’s founder Cara Ober, numerous friends of mine and of the publication. (I also, full disclosure, dog-sat Watson’s beloved Great Danes, Nigel and Ada, a couple of times.) I’ve lived in Baltimore for a good portion of Area 405’s existence and it has always had such an intense presence, and even more so for those who, like David Page, had been working at 405 since its opening.

A.Wake is certainly an end of an era, but hopefully not the end.

Photos by the author except where otherwise noted; header image by Julia Pearson