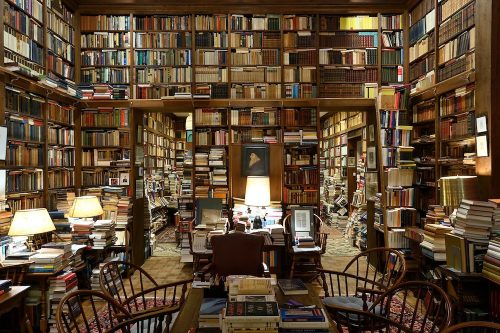 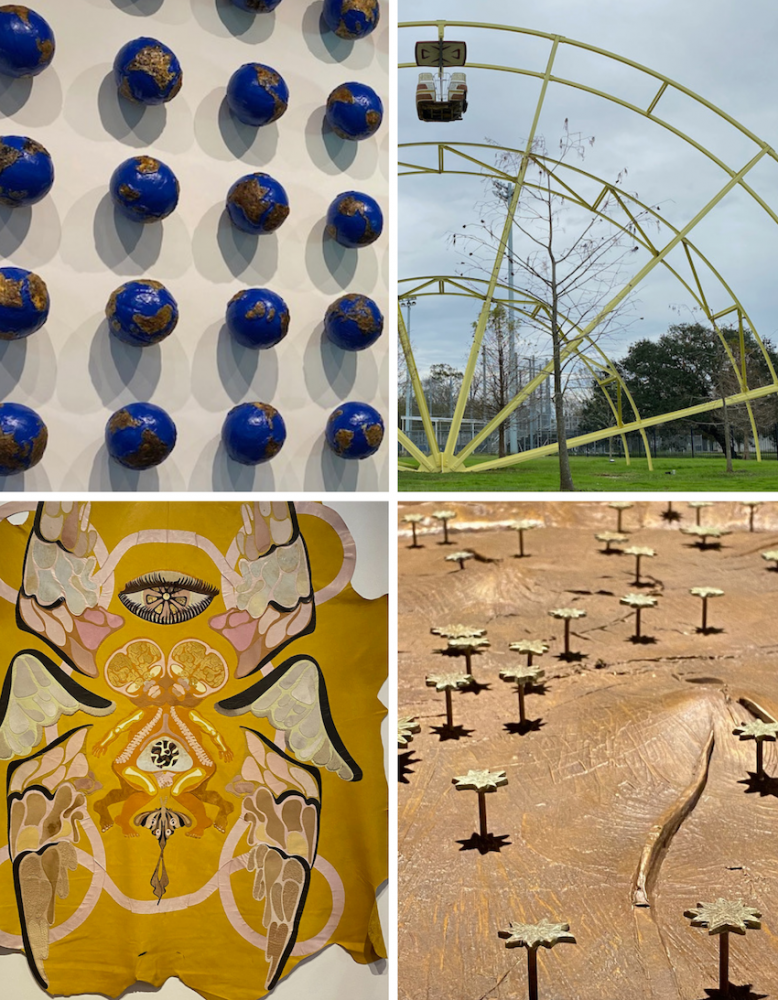 Looking for the Lakefront Airport Terminal in New Orleans East, my friend, a native New Orleanian, is behind the wheel and she’s not sure she’s ever been there before. We are driving along the border of Lake Pontchartrain, and past a few palm trees, when the impressive art deco building finally comes into view. In the lobby, we follow a few signs for Prospect.5 and we’re surrounded by the 1930s murals of Xavier Gonzalez, though that’s not the art we’ve come to see. Partially obscured by the sun pouring through the windows, a comparatively small video installation by Prospect artist Jamilah Sabur plays unassumingly. Now we’ve found what we’ve been looking for.

Like Baltimore, New Orleans is a city of neighborhoods. One of the aims of Prospect New Orleans is to have people travel from neighborhood to neighborhood, seeing more of the city than they might otherwise—and to see some lesser-known places through the eyes of an artist. Many of the works in the contemporary international triennial Prospect are site-specific, made in direct response to the exhibition location. While there are plenty of artists featured in the city’s museums for the exhibition, there are just as many unconventional sites: small city parks, a dilapidated one-room film house, the gated courtyard of the shuttered New Orleans African American Museum, a research archive on Tulane University’s campus, a residential lot in the Lower 9th Ward, and a now-empty Bywater restaurant around the corner from my old apartment that can’t quite seem to maintain a fruitful business.

The first iteration of Prospect (2008-2009) was developed in response to Hurricane Katrina. Dan Cameron, the exhibition’s first curator, sought to bring visitors—and revenue—to the city after the disaster. I was still living in Alabama at the time, but I remember hearing anecdotes from Prospect.1 that sounded more like surreal short stories than art installations. The city’s aptitude for performance, spontaneity, and extraordinary characters made Prospect.1 sound wild and mythical—something, I imagine, like the cast of a John Waters film throwing a rager in an abandoned New Orleans shotgun.

These days, Prospect is a bit more organized with a lot more funding. Since its inception, the city-wide exhibition has encouraged artists to allow diverse and nonconventional venues to influence their work, responding to New Orleans, the American South, and, often as a result, issues of environmental, economic, and racial justice. Nearly eighty percent of the 51 artists featured in Prospect.5: Yesterday We Said Tomorrow are artists of color; contemporary Black identity and the ongoing impact of oppression are dominant themes (as the time-twisting title of the exhibition suggests). The unique spirituality of the city is also very palpable within a great deal of work that references Catholicism, Hoodoo/Voodoo, celestial bodies, and mythology. Finally, it was striking how much sound filled the spaces as an intentional part of the exhibition, a counterpoint to the typical experience of visual art in reverent silence. Whether outside or inside, sounds varied from rushing water to brass bands, political speeches to neighborhood chatter, chanting prayer to ethereal soundscapes.

The first pair of pieces I saw—and by far one of my favorite moments—was an installation and sound piece by Glenn Ligon and Jennie C. Jones. Housed in the chapel-like library annex of the Ogden Museum of Southern Art, Ligon installed seven neon sculptures that reference dates (spanning from 2017-2021) when Confederate monuments were removed from the city of New Orleans—in one way or another, by the government or by the people. Playing overhead is a piece called High as the Lightning Skies, in which Jones combines the Houston, Los Angeles, and Baltimore choirs singing a layered version of the gospel song “A City Called Heaven,” followed by a piece called The Edges of Heaven, a tonal sound bath layered with moments of jazz and symphony by Alvin Singleton.

Walking around the empty, circular room, the absence of the Confederate monuments was palpable and heavy. In their place, a sorrowful yet hopeful gospel song at least a century old, sung by voices from across the country, filled the space. Ethereal lights seemed to flicker on the vaulted wooden ceiling, and scenes of summer 2020 police brutality protests and Black Lives Matter marches came rushing back. This moment exemplifies what Prospect New Orleans does at its best—evoking both the nation’s and the city’s history in the context of contemporary issues in a way that stirs emotions rather than simply checking a box on an academic or institutional agenda.

Unlike an art fair, such as Miami’s Art Basel, Prospect’s aim is not to sell art—which is a good thing, because Prospect is not consolidated for casual browsing. With 17 different venues and a map in hand, I moved in currents and countercurrents over the course of my 11-day visit and still didn’t see it all. (I didn’t even attempt to see any of the satellite venues.) But Prospect is successful in what it aims to do: encourage residents and visitors to see contemporary art in one of the country’s oldest cities while remaining open to stop for a good meal, a strong drink, or an unexpected conversation along the way.

After watching a video installation by Baltimore-born artist Sharon Hayes that featured queer and trans performers at a local karaoke bar, I had a 45-minute conversation about the non-narrative film and the importance of mentorship with a young man from Shreveport who had just moved to New Orleans. After finding a sculpture of a woman-crocodile hybrid by Wangechi Mutu along the Mississippi River, I went for a spontaneous mid-afternoon cocktail with the owner of a Hoodoo rootwork and conjure shop who had just drawn a few Tarot cards for me.

After traveling to a sculpture by EJ Hill in New Orleans East, I saw a Catholic priest bless the sword of Joan of Arc at the entrance of Saint Louis Cathedral during a parade that marks the birthday of the Maid of Orléans and Twelfth Night, the first day of Carnival season. After a multi-media installation by Nari Ward in the Treme, I ate falafel in St. Louis Cemetery #3 with a Fellow at the Joan Mitchell Center who is making ambitious work about the mutable nature of time, a sort of Borgesian choose-your-own-adventure brought to life. After viewing a selection of intimate black and white portraits by George Dureau, I drank a Bloody Mary and browsed crystals at a lapidary.

This ebb and flow of art and the city is the heart of Prospect. Like any active experience, attending Prospect is transitory and irreplicable, making no guarantees that another visitor would have a similar experience. I am sorry that I missed out on one Prospect artist, Malcolm Peacock, an artist with significant Baltimore ties. His project, We Served, involves a one-on-one performance at a location of the viewer’s choosing within the city. I know, by word of mouth, that there would have been red beans and rice. But though I didn’t RSVP in time, I still left New Orleans feeling quite full.

The celestial bronze works by Kiki Smith are juxtaposed with cyanotype prints of hurricane patterns, recontextualizing the scope of natural disasters and phenomena.

The Neighborhood Story Project is an ongoing endeavor in partnership with the University of New Orleans to collect and record local ethnographies as the foundation for a wide range of art projects.

Rises in the East by EJ Hill is inspired by Six Flags Jazzland, which has remained abandoned since Hurricane Katrina, and the New Orleans East neighborhood, which has been most impacted by the amusement park’s closure.

Crates of Mallus by Mark Bradford is inspired by the Greek philosopher who is credited with creating the first globe of Earth.

Kameelah Janan Rasheed’s Future Forms is inspired by the final issue of Nkombo, a New Orleans-based Black literary magazine (1968-1974) housed in the archive. The work is installed on the surface of the research center’s reading tables.

This two-channel video installation, Bulk Pangaea by Jamilah Sabur, is named after a cargo ship that transports bauxite (a material used to make aluminum) from Jamaica to Louisiana, highlighting the social and environmental impact of the trade.

Inspired by the tripod seat of the Oracle of Delphi, this multisensory installation by Anastasia Pelias includes sound by composer Sophocles Arvanites and scent by FOLIE à PLUSIEURS Perfume.

George Dureau (1930-2014) was a New Orleans photographer who took intimate portraits of his subjects both in and out of the studio.

Irrigation Ditch by Dawoud Bey is part of a larger series of photographic and video work focused on Louisiana plantations and the lasting repercussions of slavery.

The tapestries of Tau Lewis are named after Ghanaian Adinkra symbols and are designed as talismans for protection and healing.

This multimedia installation by Keni Anwar explores self-discovery as a ritual, focusing on the artist’s identity as a queer Black person in the American South.

Crocodylus, by Wangechi Mutu, is a hybrid being, part woman part crocodile, inspired by the prehistoric crocodile, the transatlantic slave trade, and ancient crocodile deities.