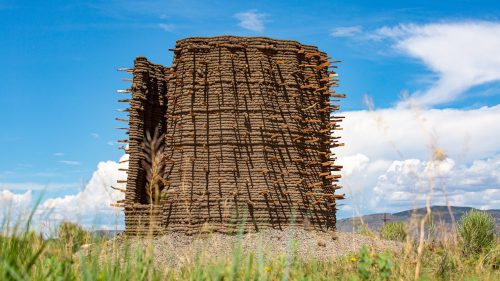 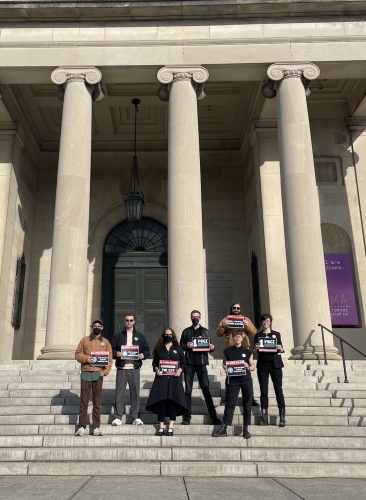 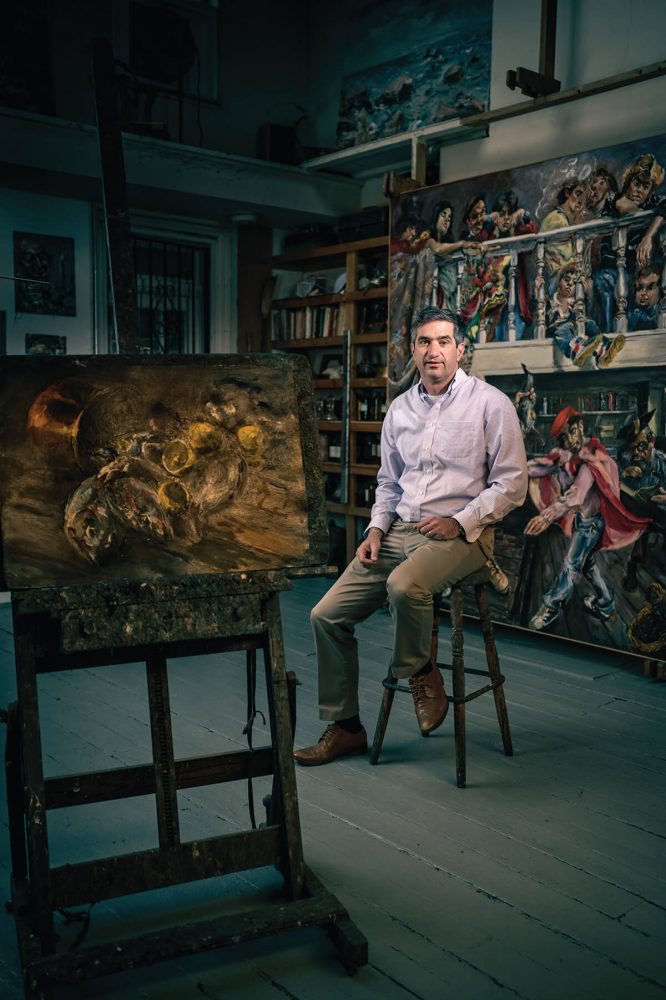 This week’s news includes: Hilton Carter is a good plant neighbor, the new Baltimore Banner, Buy into B’More instead of Vacants to Value, MD State senate passes Trans Health Equity Act,  and more reporting from Hyperallergic, The AFRO, WYPR, and other local and independent news sources.

Guard the Guards, Not Just the Art, Says Baltimore Museum Union in Demonstration
by Jasmine Liu
Published March 22 in Hyperallergic

Excerpt: At 9:30am today, March 22, around a dozen members of the Baltimore Museum of Art (BMA) Union held a demonstration right off the front steps leading up to the historic entrance of the museum. They held placards that read “Guarding the Guards” — a rewording of the exhibition title Guarding the Art, curated by the museum’s security guards and opening to press at the same time as their action. Other signs said “1 Voice 1 Union,” “Wall-to-Wall Union Election,” and “Sign Our Union Election Agreement Now.”

The workers’ goal was to put pressure on museum Director Christopher Bedford to sign the City of Baltimore’s union election agreement, which workers say he received two months ago. Without his signature, workers cannot vote to certify their union — which a petition on BMA Union’s website claims a majority of eligible staff support. The hourlong demonstration was sandwiched into a packed day for the workers. Many of them had just come from a meeting with Bedford and Chief Operating Officer Christine Dietz, and some were headed back to the museum to work on a show curated by many of the same guards who are advocating for unionization.

Excerpt: Jenenne Whitfield, president and CEO of the Heidelberg Project in Detroit, will succeed Rebecca Alban Hoffberger as director of the American Visionary Art Museum in Baltimore.

AVAM’s board announced Wednesday that Whitfield will take up her new role in September. She will be only the second director in the history of the national museum and education center, which is dedicated to showcasing “intuitive, self-taught artistry and thought.”

Hoffberger, who co-founded the museum with her late husband LeRoy and has served as its director and chief curator since it opened in 1995, announced last July that she planned to retire this spring. Her last day as full time director will be April 3, but she plans to stay on part-time to aid in the transition.

Whitfield, 60, has worked with the Heidelberg Project, an outdoor arts environment, for 28 years and has been its president and CEO since 2017. Under her direction, it has gained international prominence.

The Well-Funded ‘Baltimore Banner’ Will Rival ‘The Sun.’ Can it Prove Sustainable?
by Ron Cassie
Published March 21 in Baltimore Magazine

Excerpt: Stewart Bainum, the Takoma Park philanthropist behind the soon-to-be launched The Baltimore Banner, the new city digital newspaper, has shared this story before, but it bears repeating.

And for good reason. The state had been infamous for its corruption and drama long before the convictions of former governors Spiro Agnew and Marvin Mandel just prior to Bainum’s arrival. Several of the reporters covering Annapolis while he held elected office went on to big careers, including future PBS NewsHour host Gwen Ifill–who covered Bainum’s bill to get rid of a lucrative tax break for a politically connected all-male club in suburban Washington–and future Pulitzer Prize-winning columnist Maureen Dowd. As for Bainum, he left politics and took over as CEO of his father’s nursing-home business, which he helped turn into one of the largest in the country. He never forgot, however, the important work of those journalists covering the halls of the Maryland State House, even as The Evening Sun and The Washington Star, where Ifill and Dowd were employed, respectively, fell by the wayside–and newspapers across the board began slashing staffs in the wake of falling print revenues.

Fast-forward to May 2020. Sitting out the early months of the COVID-19 pandemic at his family’s second home on the Eastern Shore, Bainum, who turned 76 last month, began brainstorming his next philanthropic endeavor. He’d made several successful early philanthropic investments in sub-Saharan Africa in recent years, including in a Liberian case-management system that improved infant mortality rates. Plainspoken, earnest, and still curious-minded–with admittedly enough of an ego that he cares about his legacy–Bainum sought another high-risk, high-public reward venture where others were not yet willing to open their wallets. Ideally, a project with the potential to establish a model that could be replicated and have a broad impact. Ideally, closer to home.

The Trans Health Equity Act of 2022 would add Maryland to the list of many states, including California, Montana, and Wisconsin, that have expanded the gender-affirming care covered by their Medicaid programs in the past five years.

It would require the state’s Medicaid program to provide comprehensive gender-affirming treatment to the adults it covers.

“It affirms the treatment as being medically necessary, and it ensures that the treatment that is covered treats a condition that’s related to the individual’s gender identity.”

Excerpt: Dr. Catherine Kibirige was a teenager when she decided her career would center on HIV research.

Her parents were natives of Uganda, but she was born in Kenya after they were exiled during the Ugandan Civil War. Eventually, her father got a job in London as an engineer, and he sent for Kibirige and her sister to come join him.

While in secondary school, Kibirige learned that Uganda had been severely hit by HIV and AIDS. The first cases of HIV in Africa were recorded and characterized in the Rakai District, a community in the central region of Uganda.

“We’d just come out of a civil war, so it was very devastating. On top of all the issues with the civil war, there’d been famine, there’d been desolation and then we had HIV,” said Kibirige. “It really had a huge impact on us as a nation and I lost a lot of close relatives. I knew I wanted to be involved in HIV research.”

Excerpt: The first thing you see is the paint. Splashed across canvases that hang on the walls. Slathered onto paper thumbtacked to a door. Smudged by fingerprints along cabinets and light switches. Dozens of squished silver tubes of the stuff, piled high like some modern sculpture. Its pixie-dust-like pigments waiting on a shelf to be mixed.

The colorful chaos is a contrast to Ben Middleman, who, in a crisp button-up and khakis, walks around his late father’s studio, sharing the stories behind each of its myriad artworks. One particularly massive oil-on-linen, titled The Fishmonger, sits on an ad-hoc easel at eight feet high, featuring a bacchanalian cast of characters, some standing nude, smoking cigarettes, donning top-hats, and dancing in hot-pink capes, all against the backdrop of the very room in which we stand.

“You can see, that’s the balcony up there, the model stand—that’s me, and my older brother, I think that’s my mom,” he says. “It’s the house, the studio—and everything all kind of revolving around it.”

Excerpt: After releasing a Target collection of plant supplies and several books on plant care, Hilton Carter is growing something new: a plant shop in Hampden called Green Neighbor.

Carter announced in an Instagram post on Sunday that he is opening the shop with Shawn Chopra, co-owner of Good Neighbor, a design store and café in Hampden.

“We are extremely fortunate to have an incredible team of plant lovers who will be working in the shop to help you select the best plants for your space, hosting workshops and plant consultation,” Carter wrote on Instagram.

Green Neighbor will be located at 3827 Falls Road in Hampden, in Good Neighbor’s greenhouse adjacent to the design store and café.

The plant shop will have a grand opening Saturday, April 2, from 9 a.m. to 8 p.m., with music, drinks and food.

Excerpt: In her signature suite and bow-tie outfit Housing Commissioner Alice Kennedy laid out her many responsibilities in front of a room full of developers, investors, former and current administrators including her former boss, Paul Graziano who had placed himself modestly into the last row. Only when it came to the few daycare centers which for some odd reason DHCD still runs but tries to get rid off, did she briefly refer to Graziano by saying “he would know something about that topic.” This wasn’t meant to imply he wouldn’t know about the other topics, still this interpretation briefly lingered in my head, before her forward looking presentation recaptured my attention. Many good things seem to be in the offing, many having to do with efficiency of the nearly 400 employee department itself, whether it is for permits or the release of federal grant money to small local recipients who suffer because payments take forever.

But one thing, especially caught my attention: The Buy Into B’more initiative that had just been announced together with a $100 million infusion into Baltimore affordable housing initiatives. $39 million are supposed to go into addressing vacant homes, in part motivated by the tragedy of three fire fighters dying in a vacant home that caught fire earlier this year. (See Mayor’s press release)

Excerpt: “Fuck out of here, white boy!” someone yelled at presidential hopeful and former Baltimore City Mayor Martin O’Malley back in 2015.

It was April 29, 2015 to be exact, just two days after Baltimoreans revolted in response to the police killing of Freddie Gray, burning a CVS pharmacy and some cop cars, and doing plenty of other property damage.

O’Malley was back in the city he once ran—which was now an international news story and framed by some hungry reporters as “the next Ferguson”—and already teasing a 2016 presidential run.

“Get out!” another person in the crowd yelled at the then-presidential hopeful.

Baltimoreans who showed up to heckle O’Malley that day were there to demand answers for the “zero tolerance” policies he imposed on the city, which they believed created many of the conditions that led to Freddie Gray’s death and to the uprising that followed. In 1999, O’Malley ran for mayor on fixing the city’s homicide problem (315 homicides in 1998) by applying a “zero tolerance” approach to crime, a “broken windows”-style policy of arresting people for incredibly low-level charges such as jaywalking, loitering, open container and so on, under the belief that this helps reduce crime. The theory, quite simply is: If you lock up more people, there will be fewer people around to commit crimes.