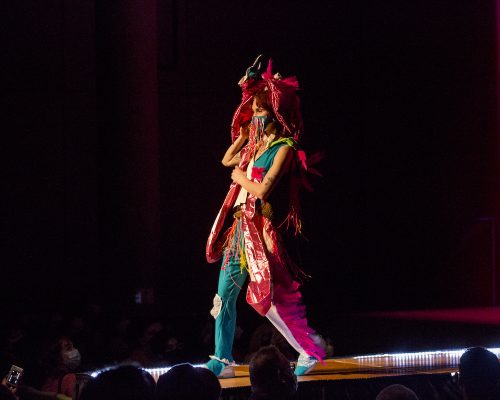 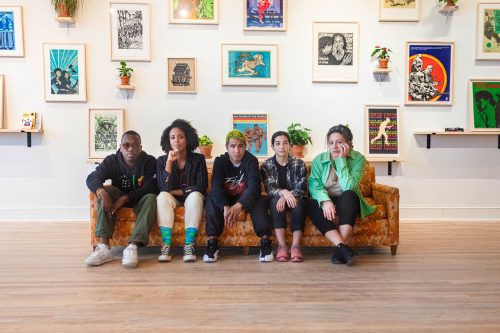 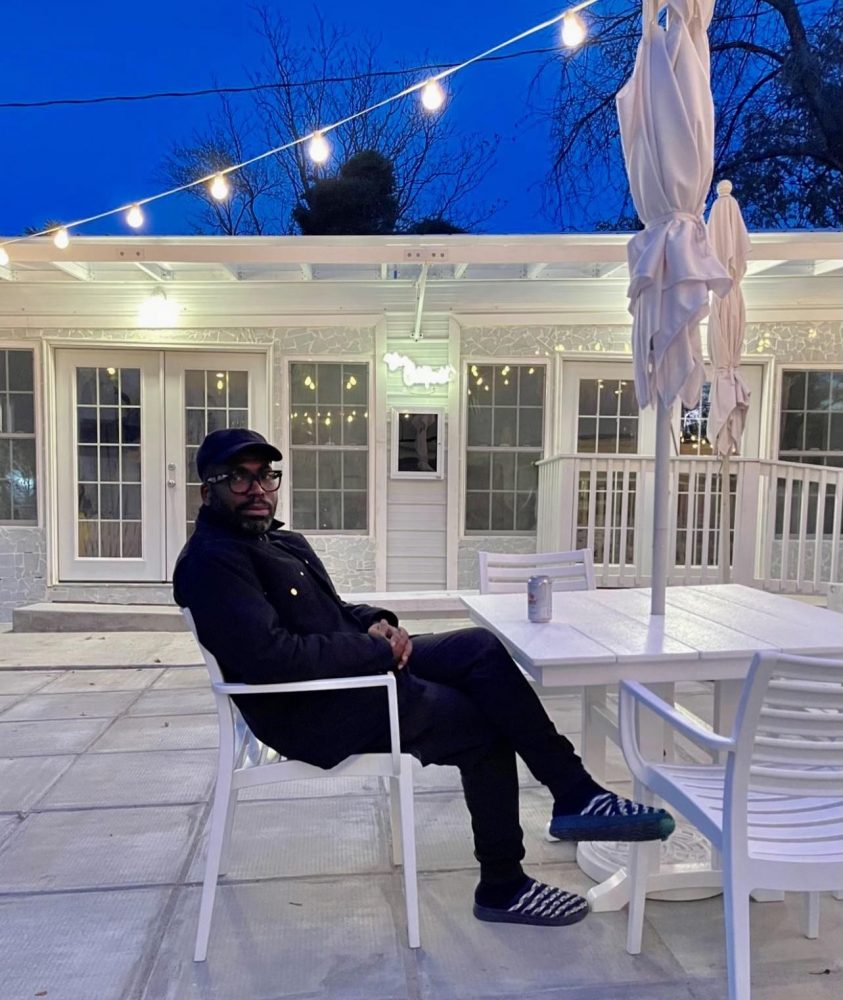 Excerpt: There’s an empty double lot on the corner of Greenmount and Chestnut Hill Avenues that, in the next few years, could become one of the most visionary spaces in Baltimore.

Internationally renowned artist Derrick Adams has purchased the Waverly property, which he plans to turn into the Black Baltimore Digital Database (BBDD), a multi-purpose cultural center dedicated to cataloging historical and ongoing contributions made by the Black citizens of Baltimore, which have long been overshadowed by those of their white counterparts.

“Growing up in Baltimore, as a Black person, as an artist, it has always been a challenge to understand the creative contributions of Black Baltimore on American culture—the music, the arts, the writing,” says Adams, 52, who grew up in Park Heights before moving to New York, where he pursued a career as a multidisciplinary artist, with works now included in the prestigious permanent collections like the Metropolitan Museum of Art. “These are things thatI want to have available not just for Black History Month but every day of the week to help people understand the overall picture of the city, how it came to be what it is now, and what it could be in the future. It’s so important to know history and understand history and have a place to discover history, in a way that’s visually interesting.”

Excerpt: Artist Amy Sherald has given $1 million to the University of Louisville to establish two grant programs in Breonna Taylor’s name.

The funds came from the sale of her ethereal portrait of Taylor, which first graced the cover of Vanity Fair. The painting was jointly acquired by the Smithsonian National Museum of African American History and Culture in Washington, D.C., and the Speed Art Museum in Louisville, Kentucky, and is now on view at the former institution.

“Nothing can take away the injustice of Breonna Taylor’s death,” the university’s interim vice president for community engagement, Douglas Craddock Jr., said in a statement. “But what we must do is create spaces where Breonna Taylor is remembered and where her legacy can inspire us to carry on the hard work of erasing inequality and divisiveness.”

Opinion: Here’s the Antidote to the Toxicity in the Curtis Bay Community
by Monica Glover
Published April 13 in Maryland Matters

Excerpt: The toxic chemical industry has engulfed entire residential areas of Baltimore. But in the long-suffering neighborhood of Curtis Bay, the local community is fighting back.

Historically, Curtis Bay was a working-class white neighborhood. In recent years, Curtis Bay has seen an increasing Black population, from 25.18% Black in the 2000 Census, rising to 38.74% in the 2020 Census.

Every one of those locals has one poisonous neighbor: Curtis Bay is home to the largest medical waste incinerator in America. The Environmental Protection Agency’s Environmental Justice Screening and Mapping Tool indicates that Curtis Bay is in the 95th percentile for hazardous waste and is highly polluted.

(The writer is project manager for membership, policy and equity for the National Community Reinvestment Coalition)

Excerpt: To all appearances, Baltimore is in Covid-19 recovery. The city’s vaccination rate is at 64%,  in line with the national average. Indoor mask mandates have been lifted, and children are back to school in person. It is beginning to seem as if the worst is over, and we can cautiously return to normal (although the BA.2 variant could change things). For City Health Commissioner Letitia Dzirasa however, normal is exactly where we don’t want to be.

Normal for Baltimore is a place where entrenched economic disparities have created an uneven playing field.  Large parts of the population have little economic opportunity and even less access to quality healthcare.  So, when Covid-19 hit Baltimore just one year into Dzirasa’s new job as Health Commissioner, she was laser-focused on using it as a chance to redress those problems.

Excerpt: In the last few weeks of 2020, as another coronavirus surge was putting a stop to parties, shuttering businesses, and rendering work and school and most of social life remote, the artist Juliet Ames spied a salt box at West Thirty-sixth Street and Roland Avenue, in Baltimore, situated between Café Hon and Holy Frijoles, near a restaurant called Frazier’s on the Avenue. Salt boxes are, or have become, a Baltimore specialty. Nine hundred or so of these bespoke wooden bins—about as wide as a refrigerator, as tall as a toddler, as yellow as a rubber ducky—are stationed strategically throughout the city, mostly on streets too narrow or hills too steep for plows. For decades, they were an unremarkable part of Baltimore’s remarkable winter-weather program, which, on any given snow day, might see some three hundred personnel mobilized during each shift.

Although Baltimore averages only twenty inches of snow a year—about sixty inches less than Anchorage and a hundred less than Syracuse—the city still goes through nearly twenty thousand tons of salt every winter season, a small portion of which is distributed via the boxes, which have hinged lids for easy access, but no shovels or scoops. They are self-serve, though there’s some confusion about this: until a few years ago, most of the attention the boxes attracted in a given season amounted to a collective head scratch about what exactly they were for and who was actually allowed to use them. “Salt boxes,” a typical community message-board post read. “What gives?”

These Baltimore companies are intervening to help Ukrainian civilians and staff
by Donte Kirby
Published April 13 in Technical.ly Baltimore

Excerpt: With no tangible peace in sight, at least two local startups, differing in focus and approach, are working to assist Ukrainians living through Russia’s ongoing invasion.

One, the Remington–based medical device startup Sisu Global Health, recently sent its first shipment of the company’s Hemafuse devices to help save the lives of those that need blood transfusions.

The Hemafuse device pumps blood from an internal hemorrhage into a blood bag, allowing it to be reused. This process is known as known as autotransfusion and can supplant the need for donor blood in an active warzone, where triage is the norm and donor blood can be scarce. The company is currently trying to raise $110,000 dollars, with which it hopes to deliver Hemafuse devices for 1,000 surgeries.

Excerpt: Senator Chris Van Hollen on Friday visited Baltimore’s Reginald F. Lewis Museum to announce $650,000 in federal funding for the creation of a permanent exhibition on the history of lynching in Maryland and memorial to honor the memories of those whose lives were taken.

“It’s important that we have a permanent exhibit, that we always remember exactly what happened here in Maryland and around the country,” Van Hollen said at the press conference.

“This is a part of Maryland’s history and we can’t hide from it, we can’t shy away from it,” Van Hollen said, “We need to confront it in order to make sure that we address all of the issues that are still with us today.”

Excerpt: Opening Day has arrived at Oriole Park at Camden Yards and, to celebrate the 30th anniversary of the ballpark, the team released a tribute video featuring an original poem by Baltimore-based author, poet, and Coppin State University professor Kondwani Fidel.

Fidel’s poem, “The Origin,” pays homage to the park and its history.

The poem begins: “Can I talk to y’all for a minute, / about the ballpark that forever changed baseball. / It’s been a strong 30 years, yeah / I’m not speaking amiss when I say, / We built this. / Let’s reminisce.”

Excerpt: Baltimore will invest more than $10 million of American Rescue Plan Act funds over the next four years into community violence intervention programs to address violence in the city.

After 2021 marked the seventh straight year that Baltimore experienced more than 300 homicides, “the sheer loss of life is painful and disappointing,” Scott said in a letter accompanying Wednesday’s plan.

The solution to the violence, Scott said, is not to “simply police or prosecute our way to a safer future,” rather it will come from “connecting disparate, one-off efforts” into a more cohesive “ecosystem” of community violence intervention partners.

Excerpt: Less than 24 hours after State’s Attorney Marilyn Mosby announced her plan to run for re-election with a new campaign ad, the video has been taken down due to copyright issues.

The three-minute YouTube video, set to the song “Jesus Walks,” triggered an objection by jazz musician Curtis Lundy, the choir arranger for the vocals used on the song made famous by Kanye West.

The video, featuring shots of Mosby talking to children, hugging supporters and other images, now says, “This video has been removed by the uploader.”

Earlier today, clicking on the video link brought this message: “This video is no longer available due to a copyright claim by Curtis Lundy.”

Fox45 first reported the video being taken down. As of this afternoon, the video remains up on Mosby’s Instagram.